DrMrLordX said:
I am still curious as to why anyone needs AI enhancements in iGPUs, phone SoCs, and the like. What's the play here? Run massive AI learning clusters with these things?
Click to expand...

Hmm. Seems misleading but I guess if they're using machine learning to accomplish that feat then great.
S

DrMrLordX said:
I am still curious as to why anyone needs AI enhancements in iGPUs, phone SoCs, and the like. What's the play here? Run massive AI learning clusters with these things?
Click to expand...

AI/ML accelerators in these things are mainly for inference purposes - training most NN's takes considerable time and power (watts and TOPS), whereas inference using a fully trained NN can be extremely efficient even on these relatively small ASIC's.

As for actual use cases, ML can be used for various vision/imaging and audio based tasks (feature/facial recognition, image stabilisation, speech synthesis, voice recognition, handwriting recognition?) - basically anything with identifiable patterns will benefit from it, if the NN can be compressed efficiently enough to run on a small footprint.

Though this is an old topic that had no update since last year but I think this topic is still suitable to place some leaks here.


emmm ok there is another one in same thread:

Am I reading that right? They hit 49ns?
Reactions: inf64 and lightmanek

Take this as rumors for now...

Am I reading that right? They hit 49ns?
Click to expand...

Maybe that guy's memory kit win silicon lottery. But still it might be a bug of recognize latency of Renoir, cuz Renoir is not fully support by AIDA64 yet...... But OTOH the FCLK is pretty real.
Reactions: Tlh97, Elfear, lightmanek and 2 others

NostaSeronx said:
Take this as rumors for now...

that would be banded kestrel (raven ridge 2) 2.0

cortexa99 said:
Maybe that guy's memory kit win silicon lottery. But still it might be a bug of recognize latency of Renoir, cuz Renoir is not fully support by AIDA64 yet...... But OTOH the FCLK is pretty real.
Click to expand...

With those timings and memory clocks the latency is somewhat believable.
Reactions: lightmanek

cortexa99 said:
Though this is an old topic that had no update since last year but I think this topic is still suitable to place some leaks here.


emmm ok there is another one in same thread:

Yes, but only if Renoir APU/AM4 will jump into any older AM4 motherboards. 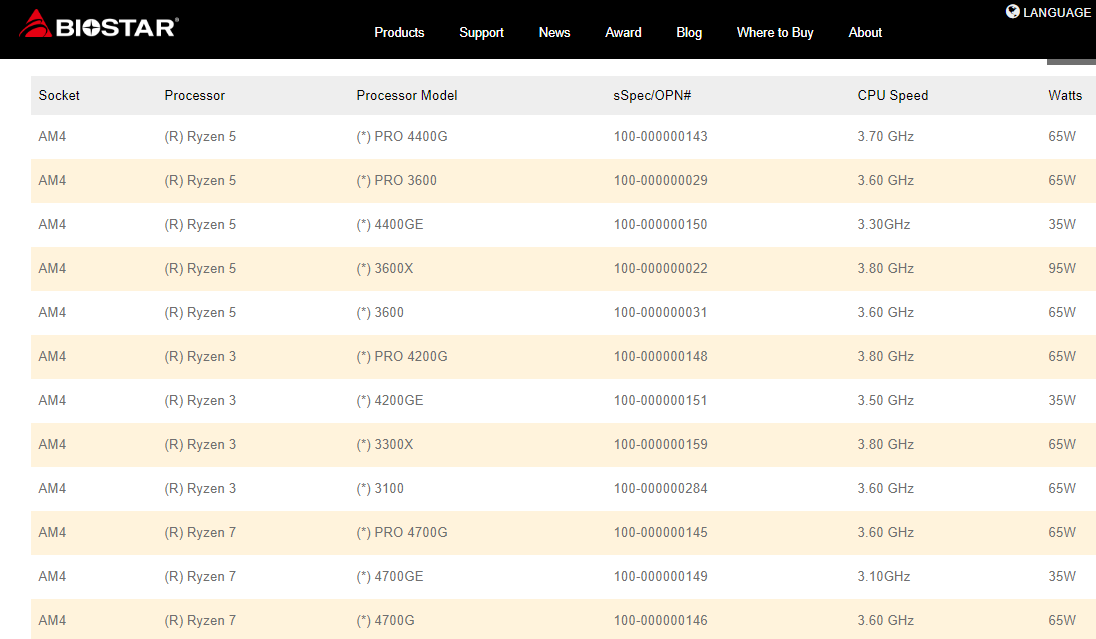 I too am waiting for the 4700G, but I've heard and read numerous articles that it's now renamed the Ryzen 7 Pro 4750G? It's either that or there will both be the 4700G and Pro 4750G. But the more alarming thing I've heard is that these high end APUs won't be available for regular consumers and more integrated builders and prebuilts. I hope this isn't the case. If anyone can say differently, I'd love to hear it as I don't want to give my hopes up waiting for nothing.

EDIT : Now that I am reading more it seems that there will be PRO and NON Pro versions? But who knows. I just finished reading this article - https://www.wepc.com/news/3dmark-listings-amd-ryzen-pro-4750g-4650g-4350g-apus/

It's the NB clock in CPUz Memory tab.

A detailed and useful explanation how FCLK and memory interface works on Renoir by AMD's Robert Hallock: 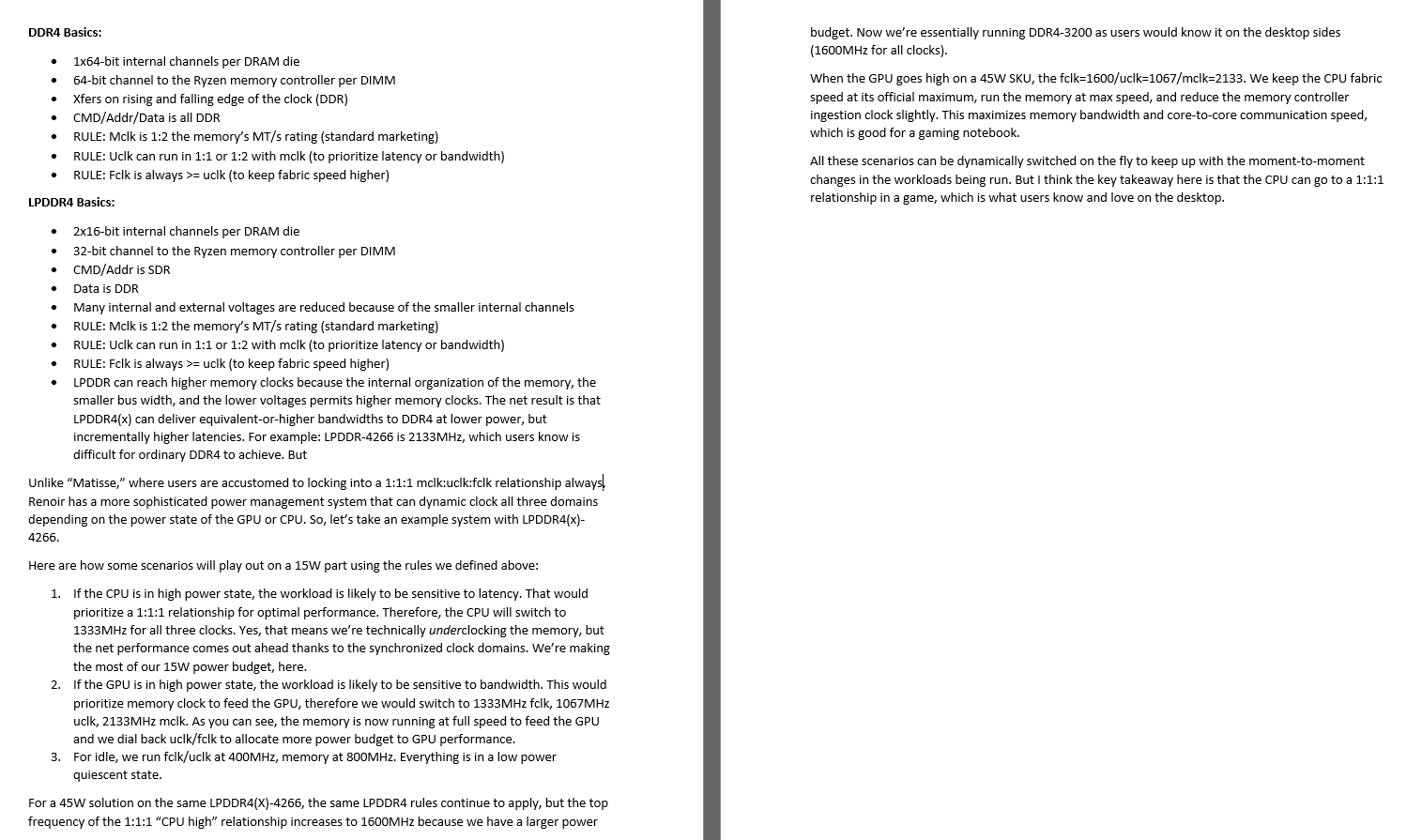 That's an interesting automatic balancing between latency and bandwidth. So essentially in effect starting with Renoir AMD is applying Zen 2's fine tuned core frequency algorithm to the different memory domains as well.

The three examples focus on Renoir being an APU, with the iGPU being the bandwidth sensitive example. It will be interesting to see if this tech is still also applied to the next GPU-less Zen 3 CPUs. I'm expecting that to be the case, with the use of e.g. memory bandwidth sensitive AVX instructions making the memory domains switch frequency accordingly.

Such behaviors could be tested on Renoir already, does anybody know of reviews that took a detailed look at that area (considering the shared image is from AMD's reviewer guide, so all reviewers equipped by AMD already know this)?
Reactions: Tlh97 and Gideon

inf64 said:
It's the NB clock in CPUz Memory tab.
Click to expand...

Ahh forgot about that thx.
D

Sorry if I am late, but I know that Athlon got revived, but AMD has plans to make Sempron or Duron come back? BTW these new chips from AMD makes me think to move to them now.

dark zero said:
AMD has plans to make Sempron or Duron come back?
Click to expand...

Official answer is no.

Duron and Turion were succeeded by Sempron. Thus, leads to below:

Unofficial answer is Sempron FX/One might potentially be a thing;
sFX => Unlocked PPT (OEM-decided(BGA socket) or User-decided(PGA socket))
sONE => Locked PPT of at most 18W.

However, it won't be Zen but a from-scratch module architecture that scales across GlobalFoundries Advanced FDX nodes (12FDX -> 10FDX -> 7FDX).
Last edited: Jul 3, 2020

Very intresting, but it is kind of expected because of Renoir APU monolithic design.

AMD's 7 nm "Renoir" APU silicon, which features eight "Zen 2" CPU cores, has only a quarter of the L3 cache of the 8-core "Zen 2" CCD used in "Matisse," "Rome," and "Castle Peak" processors, with each of its two quad-core compute complexes ... The latest series of Ryzen CPUs has been out for six weeks and yet only about a week ago were we able to get our hands on the Ryzen 7 3800X for the first time. So what's the deal? Why has the 3800X been so hard to get, how does it differ from the 3700X and why has the TDP increased by over 60%...

That's interesting. Wonder if the 4700G got anywhere near 88W during that CBR20 run?

Wow, 4700GE @ 35W TDP and still being an 8C/16T with 8CU, really intrigues me, for a DeskMini A300 build. I've been thinking (actually, more than thinking, I purchased a 6U mining server shell from Newegg recently) about separating out my mining activities (building a dedicated 6/8-GPU mining rig), from my daily desktop usage, which could easily be accomplished with one of these new Renoir APUs on a DeskMini.

I could then sell off my three "huge" (*not really) gaming PCs, for appropriate prices, after I remove all storage drives from them. (And remove the GPUs for mining with.)

Edit: The only thing that gives me a bit of pause, is if AMD updates their chipset lineup, with something like an "A500" chipset, that supported PCI-E 4.0 x4 for the NVMe port. Of course, given appropriate firmware, they could probably do that already on their DeskMini A300 line, but would have to be supported by AGESA mods from AMD, I guess.