What controls Turbo Core in Xeons?

CANONKONG said:
I can help to test out the ffs files, my friends have kinds of motherboard brand and model.
The newest V3X2 ffs have been test，there are working very well.
Click to expand...

So not the same issue as with the old v3x2 when converting into ffs and integrating into bios... that is great news to me. Thank you very much.
Dual CPU Fully integrated Bios possible now

C_Payne said:
Alright. I am just very curious if that driver can be integrated, as the old v3x2 couldnt be and i suspect it might be the UEFI SMP Service not working the same in that stage of booting.

And why is that? I dont do that, however I had to remove asrock security stuff by hand. MSI had no security and I failed on gigabyte, ubu didnt help there either.
I didnt try ASUS yet.

I do all my modding with uefitool only. (uCode Removal, Security Check Removal, Inserting drivers)

To Insert a driver just Open the rom. There will be different sections. One with a lot of PEI stuff, one with a lot of dxe drivers. In the DXE section just select the bottommost dxe driver and select insert after... chose the .ffs file. then Save it. Done.
Click to expand...

I insert like you said. i check the version in old fashion way, and work
I tried to take my hand to enter that code.
Until I do the final insertion, I'm trying to get my hands on MMTOOL
Exactly in DXE CORE we introduced
I have tried the vast majority of efi made by you, congratulations
It looks like for 2696 v3, that -50 cache times or too little is too much.
Plus you put +100 cache voltage offset
The famous efi v3x2_50_vcc is -50 all over the system voltage, cpu cache voltage and cpu cache voltage offset
If I had a guide on how to do an efi, I would try it, but so ....
M

Dear god everyone is doing well in this threat. Amazing to see these performance gains. Thumbs up everyone

Any help is much appreciated, keep up the good Work Guys

sciff said:
Which stress-test did you use here?
Click to expand...

Can you explain your setup? How is your temperature? With mod, the cpu idle temperature goes up by 5c to 10c which stay around 42c to 46c. Even the temperature is fine, I am not comfortable for long run.
Click to expand...

Pair of 2696 v3 under custom water cooling loop. Idle temps are 6C or so above ambient. Sustained load levels out at about +30C above ambient. So, 50C as I like to keep my office.
The key to getting Xeons to "level up" their multi is to force down actual Vcore under load. Allow the PCU to work its magic by dynamically setting the VID in response to operating frequency - on a per-core basis - and simultaneously apply a negative offset. This lowers overall power (while giving up margin built in by Intel), allowing for higher all-core multi.
Unless someone is able to defeat the internal power monitoring decisions used to apply EDP safeguards, like ICCmax, this is the only known way to force more performance. Adding Vcore will have the opposite intended affect, that is to say it will most likely drive down the maximum achievable all-core multi. The other general dependency appears to simply be luck of the draw. Some CPUs are just better and leak less.
Reactions: lucien_br and James Kim
C

C_Payne said:
So not the same issue as with the old v3x2 when converting into ffs and integrating into bios... that is great news to me. Thank you very much.
Dual CPU Fully integrated Bios possible now

I will make more core/cache combos tomorrow.
Click to expand...

I have created the environment about the EDK2 and FASM compiler，how can I make the .c file to .efi file? What command do I need to enter?
L

CANONKONG said:
ASUS do not need any efi of ffs，it just need a bios without microcode，when finsh flashing the bios(no microcode)，set up the max turbo raido and cpu voltage offset on the bios.
Click to expand...

lucien_br said:
Hi CANONKONG! I tried to use only the bios without efi drivers and set offset -50mv on core/cache and windows freezes randomly. I also tried -20, -30 and -70 and to be continued freeze randomly.
What could be wrong? I'm using Asus X99 Deluxe II and 2696v3. With V3_50_39.efi works fine.
Thanks!
Click to expand...

Note that the C state is turned on，disabled it
Reactions: lucien_br
C

I have made a full range of ASRock x99 mainboards' MOD BIOS with CPU Vcore offset -70mV and Vcache offset -50mV. If your mainboards are ASRock,you can try it.
http://pan.baidu.com/s/1dFkuQel
Last edited: Aug 4, 2017
Reactions: chris_osw, knopflerbruce, lucien_br and 1 other person

lucien_br said:
Hi CANONKONG! I tried to use only the bios without efi drivers and set offset -50mv on core/cache and windows freezes randomly. I also tried -20, -30 and -70 and to be continued freeze randomly.
What could be wrong? I'm using Asus X99 Deluxe II and 2696v3. With V3_50_39.efi works fine.
Thanks!
Click to expand... 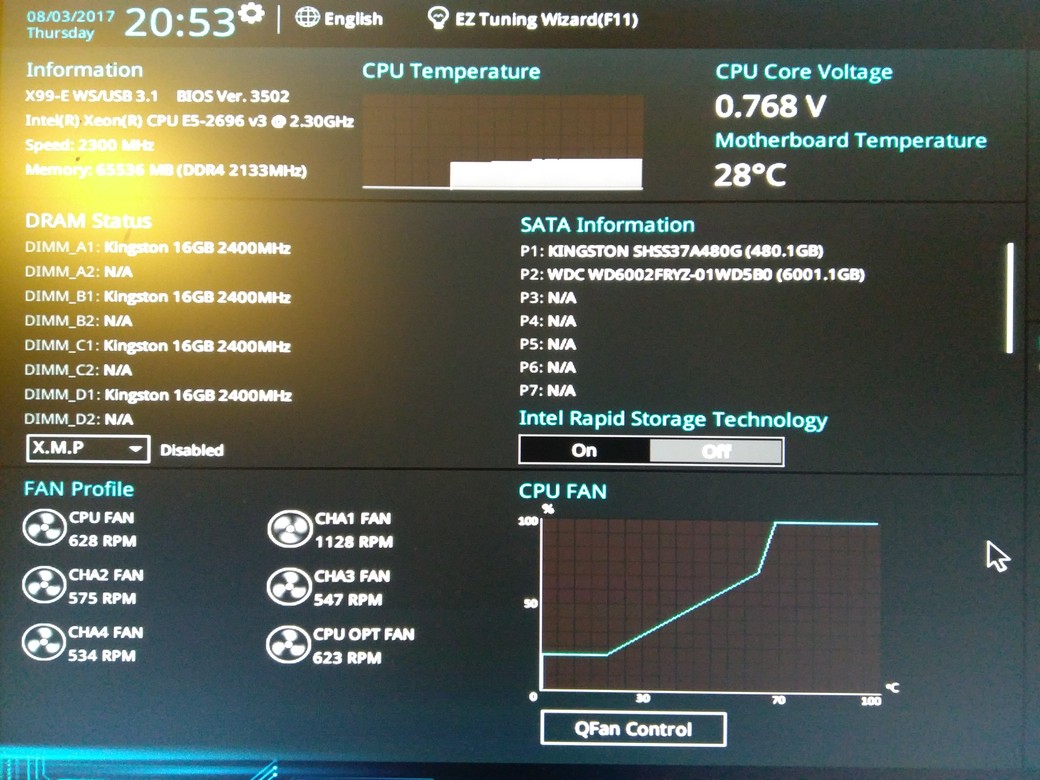 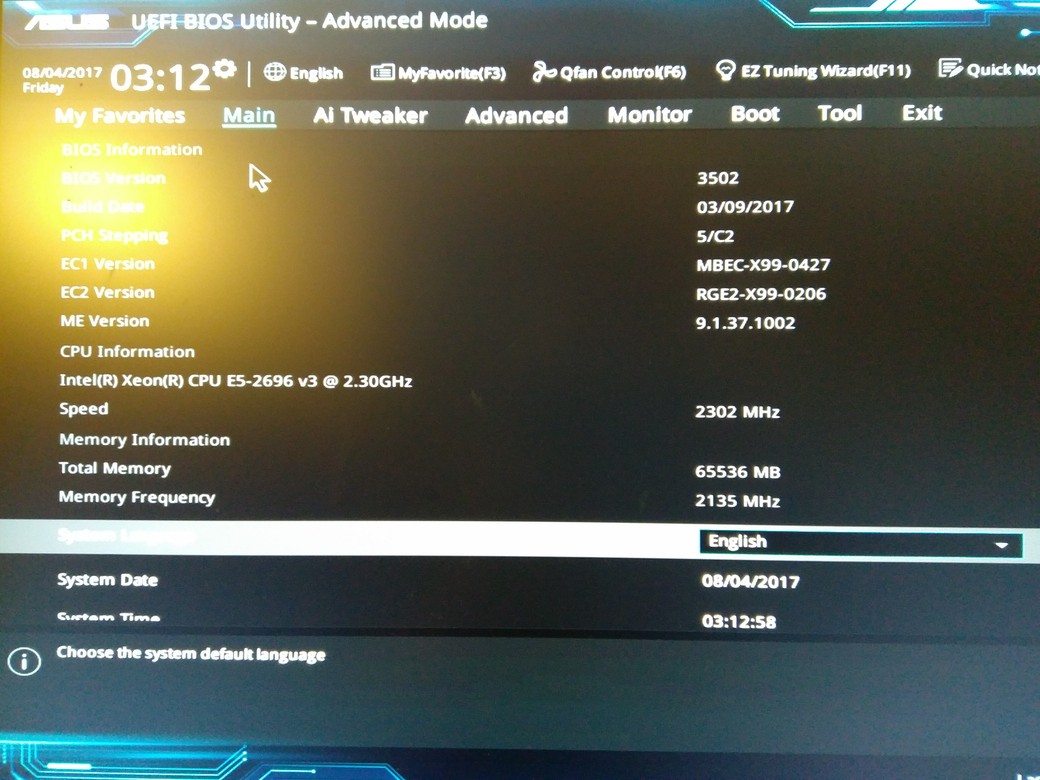 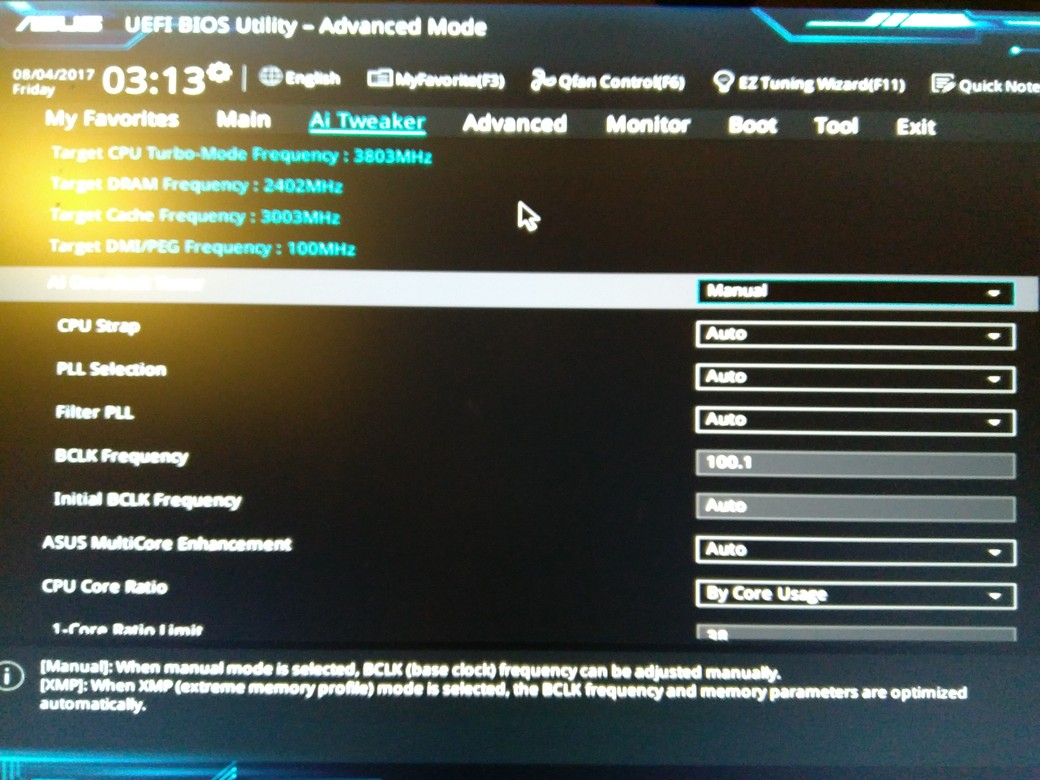 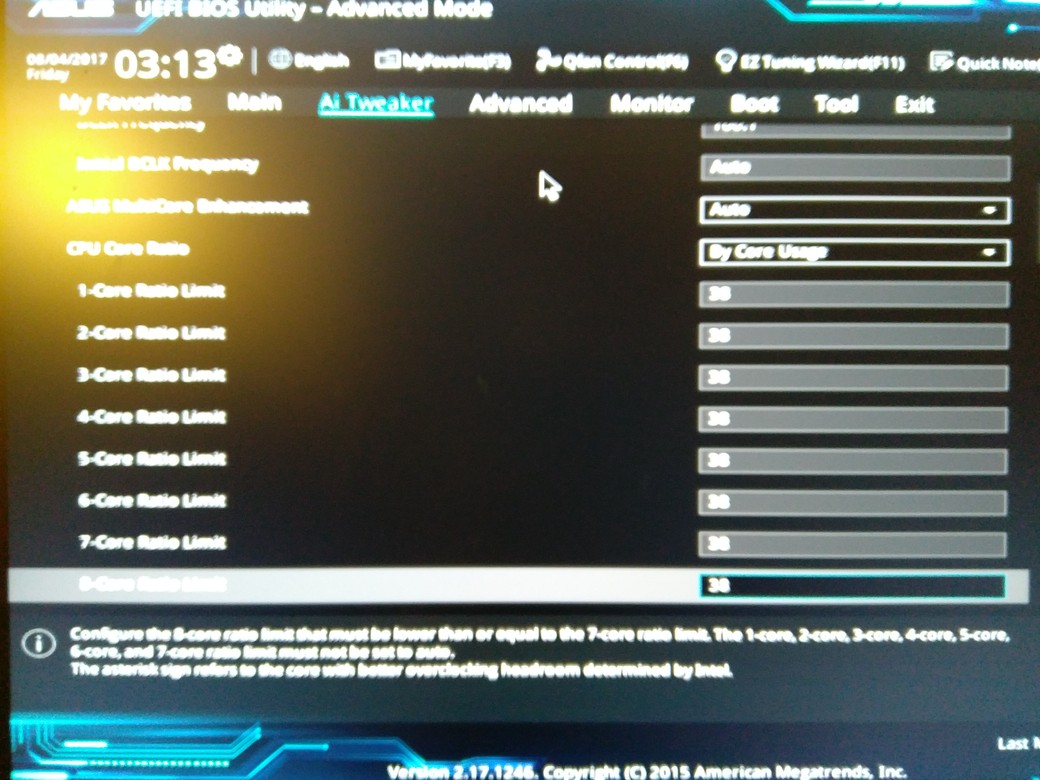 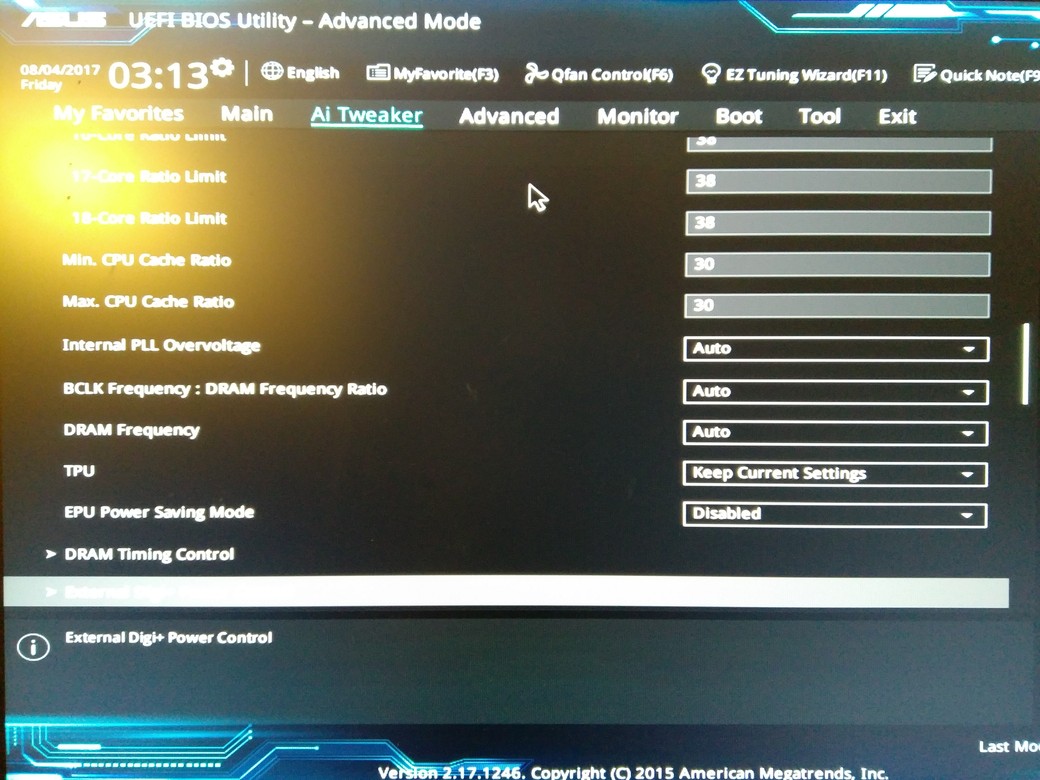 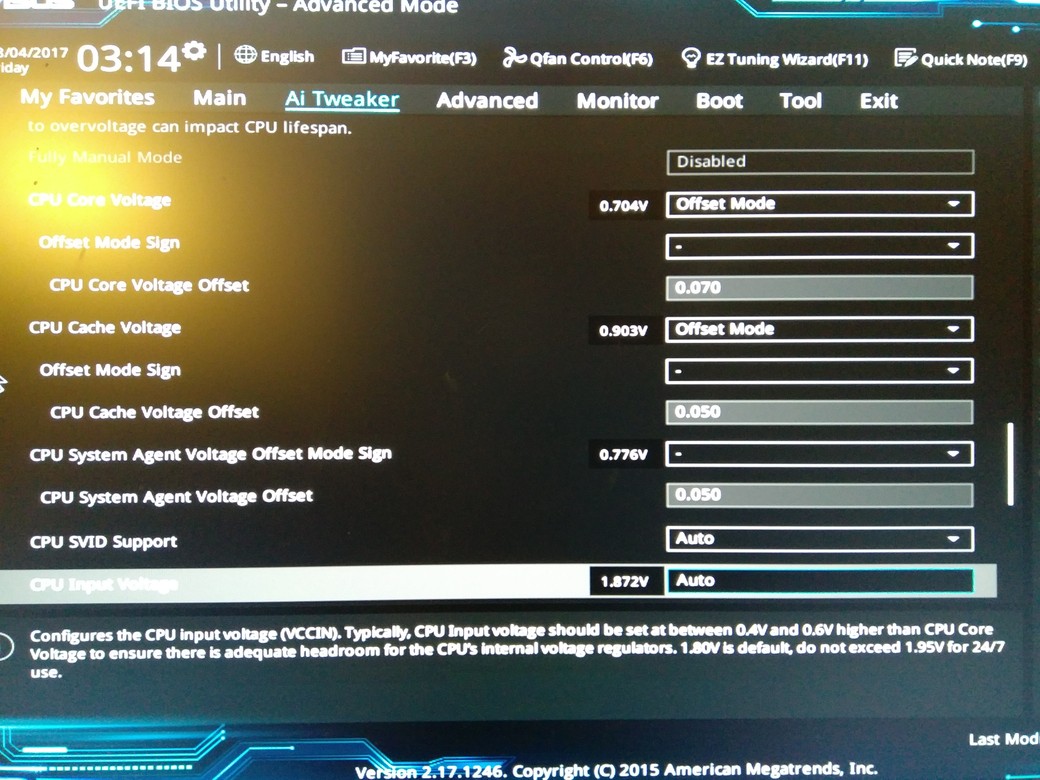 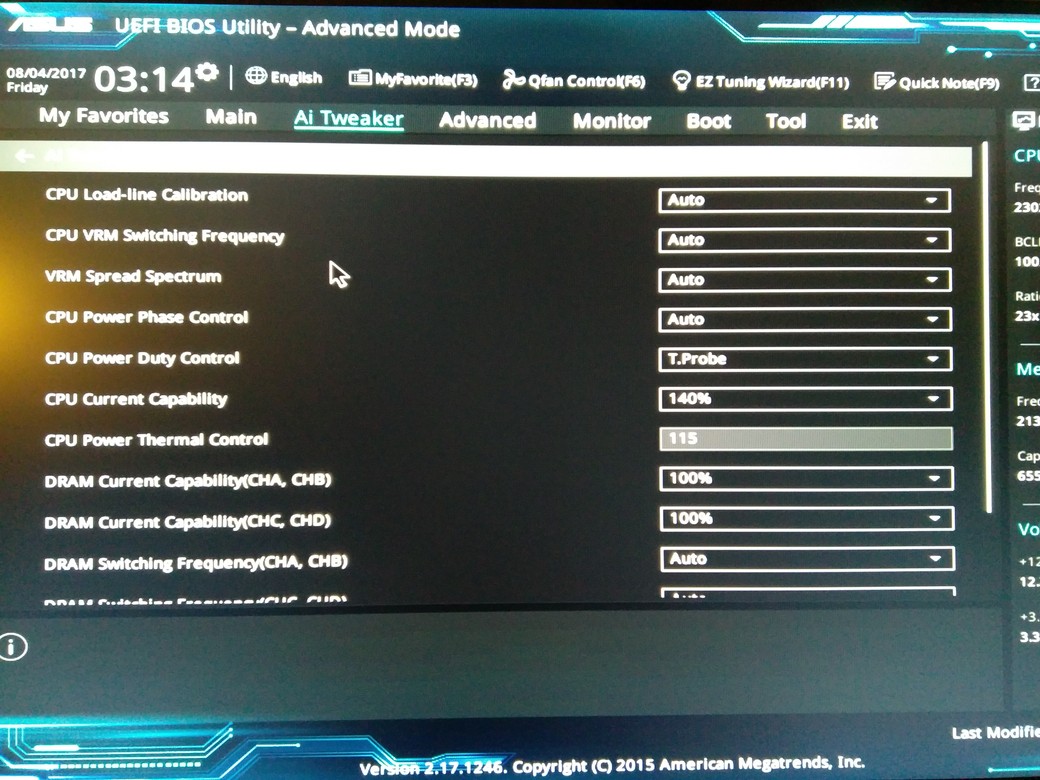 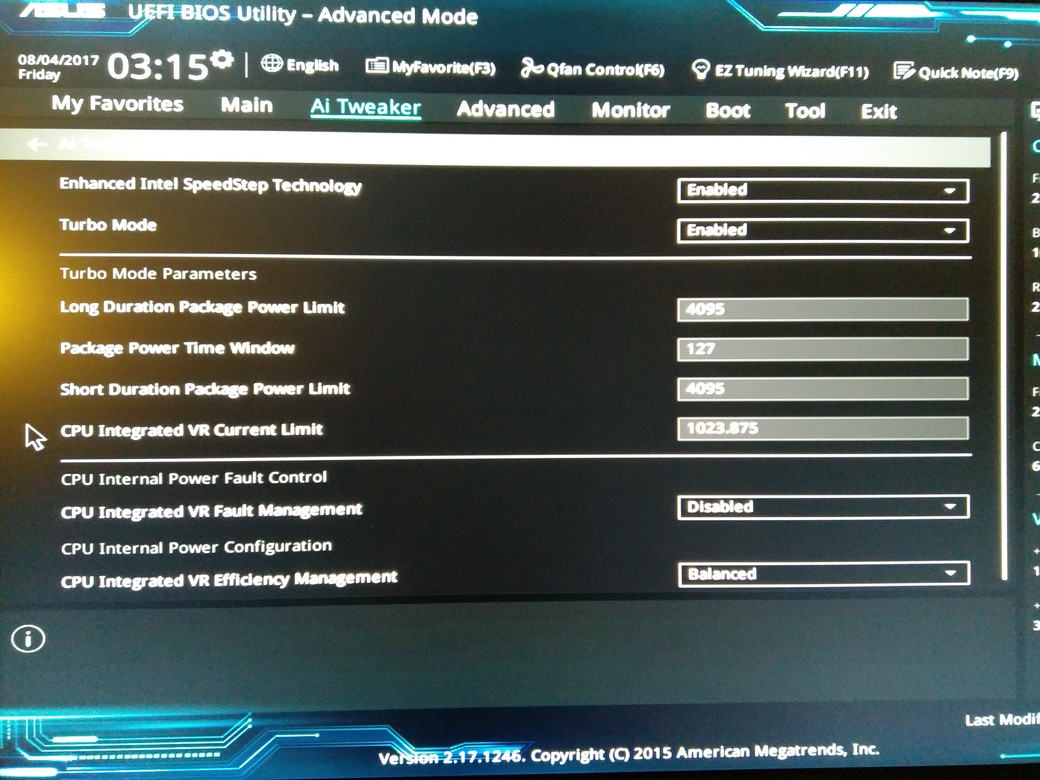 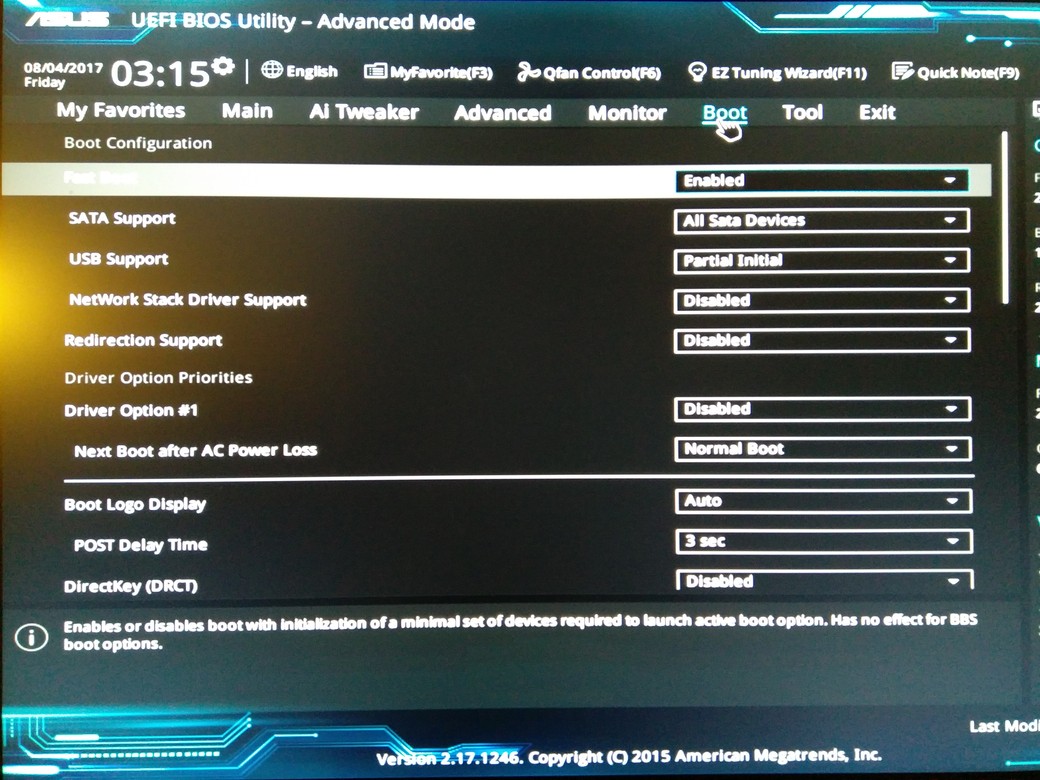 Thx for sharing Actually SA(System Agent) Voltage has nothing to do with the max ratio the processor can achieved, so not necessary to give it a negative offset

Hi @Zladimir, first I must apologize with 1AA, should be 603. Some dementia on my part, I'm getting old. As for 61E I started looking at that a long time ago but discovered the CPU I wanted to use it on could be ratio unlocked so never continued with it but AFAICR it and some Southbridge register need setting and then a CF9 reset was required. I think it is meant to happen before RAM is setup but maybe I'm wrong. The 1.67 would be more for the RAM, CPU can be multiplier limited. Power limiting has been increased to over 200W, the SKU itself is 120W nominal and up to 240W with a maximum of 40 seconds. Well you can see we tax that to the limit with power throttling down to 120W in all cases after the 40 second rolling average. VCore offset was -30mV and VCache offset -40mV.

The case of no microcode exhibits not only a drop in multiplier but an increase in vcore some 100mV higher than the normal highest multiplier vcore. Note that this board only physically measures voltage for Core 0, the other 13 cores are not accessible. With per core p-states one would need a seperate measuring point for each core. Power consumption and temperature is the greatest of all three but be aware that the CPU default Tjmax with no microcode for this chip is 95C while patches change this. In the case of patch 0x27 and 0x3A Tjmax is 90C. The DTS is the same though so this results in DTS measurements reading 5C lower than real. Personally I've always tried to use PECI since P55 days and just use DTS for differential checks.

Microcode 0x27 shows almost no drop in AVX2 load except for power limiting. Due to power limiting overall AVX2 throughput is similar to version 0x3A.


This time power estimations have been purposely halved, otherwise testing is the same as above. Thanks guys I finally made progress I used paynes 70_50.efi and got this.
https://postimg.org/image/65pex3hgr/
big shout out to sciff for helping me through pm, now I just have to figure out how to get this to work without the efi file and maybe 4ghz lol.
Reactions: sciff
Z

@Dufus,
I could follow you here on 603. Interesting. I am a bit surprised your CPU consumes so much power. Got my 2686v3 (same TDP) on 160W in AVX2 with stable x31 Multi.
Are you experiencing an vcore throttle ? Im pretty sure mine is much lower. Need to check that tomorrow. From what I recall in sheets vcore tends to throttle once it exceeds 1V, but not sure actually.
However, do you have any experience with 601 ? Maybe it might help us modifying EDP readings.
Im not much interested in boosting DRAM, but of course is a side effect of setting 61E. Which soutbridge registered need to be setted ? Can you specify ?
What register you wrote to increase nominal TDP to 100. Trying to write TDP nominal, limit 1 or 2 always resulted in getting ignored.
Yes MSR read-only responds to mine multiplier would be unlocked, too. However no change took effect yet. Did you try ?

Im quite new to writing MSR register, understand the concept and can reproduce. But I clearly lack the documentation, especially as Intel keeps the most interesting part a secret. Especially about the 6xx-register. Im curious from where you took all the information and knowledge ? Im mostly guessing and experimenting based on the published technical sheets of Intel and experience of others.

Thanks so far, Dufus.
M

Could anyone spare me a Z10PE D16 WS modded bios (with no microcodes)?
Reactions: Lunacy20BFD
M

moblaw said:
Could anyone spare me a Z10PE D16 WS modded bios (with no microcodes)?
Click to expand...

Is there a efi file, for better overall performances in balanced mode?

Also, I would like to make my own contribution. I searched the 50 post for all the usable efi and bios files for z10ped16ws that I could find.

I have them hosted here https://skydrev.org/index.php/s/5rvI5pVwddsXLZT
password is anandtech.

Maybe I should clean that folder, so it's more user friendly.

It would be cool, if the original modder of Z10PE-D16 WS made a new modded bios without microcodes from the newest available bios 3407.
Last edited: Aug 4, 2017
Reactions: Lunacy20BFD
C

Let me know if I screwed up.
Reactions: lucien_br, GTZ and MOF

Is there a efi file, for better overall performances in balanced mode?
Click to expand...

If you haven't disabled EIST, your CPUs will go to x12 in idle even in "High-Powered-Scheme", thus saving some power. If that's what you want...
G

Let me know if I screwed up.
Click to expand...

Let me know if I screwed up.
Click to expand...

C_Payne, those files is a plus or minus voltage drivers?
C

CANONKONG said:
I have made a full range of ASRock x99 mainboards' MOD BIOS with CPU Vcore offset -70mV and Vcache offset -50mV. If your mainboards are ASRock,you can try it.
http://pan.baidu.com/s/1dFkuQel
Click to expand...

YOur Asrock motherboard work well, with this bios?
I hope that my OC Formula, to work well
C

Cata40 said:
YOur Asrock motherboard work well, with this bios?
I hope that my OC Formula, to work well
Click to expand...

All ASrock X99 MOD BIOS were made by myself and tested,I think your mainboad can also work well with this bios.
C

You can use the mod bios I posted,those had been tested.
Reactions: GTZ
C

ASUS &Gigabyte don't need any efi file and ffs file,because then can set up on the bios and work very well. But ASrock & MSI don't have any effective offset about core voltage & cache voltage on the bios,so they need ffs files to mod the bios.If you don't know which ffs you need, you can choose the V3_C-Payne_70_50.ffs,it tested for more than 30 E5v3 CPUs and worked very stable.
G

CANONKONG said:
You can use the mod bios I posted,those had been tested.[/AQUOTE]
Click to expand...

I meant to quote you originally, you only have a modded BIOS for the AsRock Extreme 4/3.1 not for the original Extreme 4. I was going to try to flash it but in the AsRock website the BIOS are different with different release dates. Which leads to believe they are not the same.
You must log in or register to reply here.
Share:
Facebook Twitter Reddit Tumblr WhatsApp Email Link