Great article by Ian, well worth a read.

AnandTech: Why an Overclockable Core i3 Might Not Exist: The Supermicro C7H170-M and Intel Core i3-6100TE Review

The 1080p gaming tests show that an overclocked Core i3 can easily knock on the door of a stock Core i5 for $100 less, or the rough equivalent of another Core i3 sale. The situation is a little muddier on CPU benchmarks; with single-thread responsive getting a benefit but many workload based tests showed you need real cores to get a benefit. It doesn&#8217;t matter much at the higher end, where it won&#8217;t cannibalize sales, and it didn&#8217;t matter much on the overclockable Pentium where two threads and low cache were bottlenecks you can&#8217;t overcome.

So if you want that performance, you need to spend the extra money.

If it was a question of market share, we would see it added very quickly. But as it is not, it ends up being the difference between buying two chips or one from the same vendor &#8211; they would rather you buy two (or the equivalent of two) when there's no alternative.
Click to expand...


Looks like ASRock is not the alone. Supermicro still going strong with Skylake BCLK overclocking: 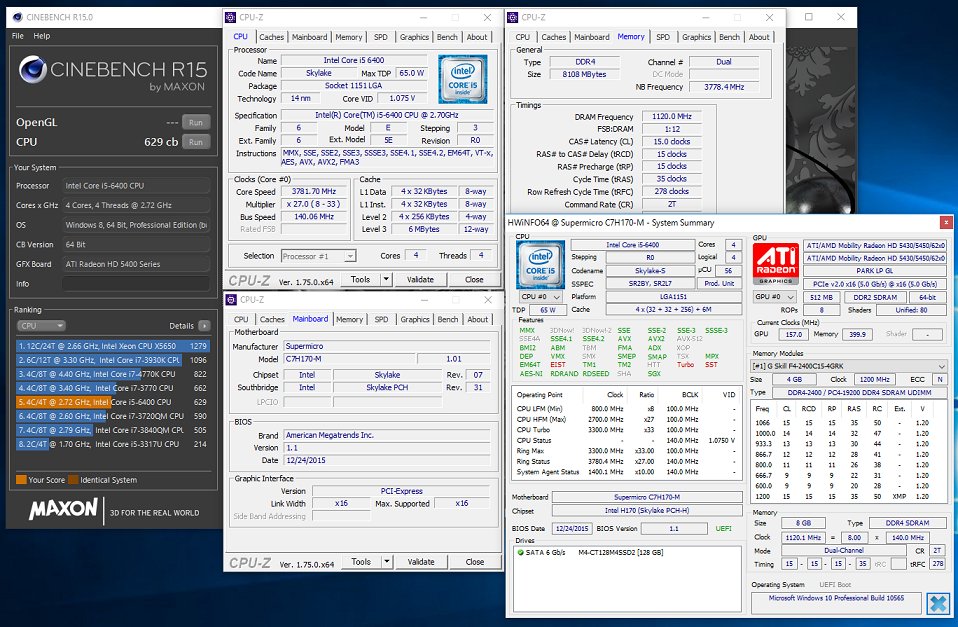 386user said:
hopefully that skull lid can be replaced like the other NUCS,,,or at least intel provide a plain black one with it
Click to expand...

Have a look at the second page, the NUC ships with two interchangable lids. One of them is plain black.
S


Reposting in this page:


Sweepr said:
Great article by Ian, well worth a read.

AnandTech: Why an Overclockable Core i3 Might Not Exist: The Supermicro C7H170-M and Intel Core i3-6100TE Review

Sweepr said:
Looks like ASRock is not the alone. Supermicro still going strong with Skylake BCLK overclocking:
Click to expand...

Have they done anything to address the issue of the IGP failing at elevated bclk speeds or AVX/AVX2 becoming unavailable under the same conditions?

Under buying options it lists, cash, credit, or sign over your firstborn.

Seriously though, it is nice to see something using the 28 watt dual core. To me this should be the standard for mid-size and up laptops, rather than the 15 watt u chips. Should also make iris pro standard. Would be a decent light gaming platform and have excellent performance for everything else.

Here, I'll save you the time listening to it...

Why are enthusiast platforms updated slower than desktop platforms? 13:30~15:40

Because they are server parts

Because they want you to buy K models, not used Xeons

Because they want you to buy K models

What determines the choice of thermal interface material for various CPUs? 26:30~29:40

Money, and the TIM currently used is sufficient for stock clock speeds

That's not what was said in the podcast.

I recommend people that actually want information to listen to it.
J

Ooh, MS has backed off from dropping Skylake support from 7 so quickly.

So if you want nothing to do with 10 (due to the forced updates and spyware) you can still buy Skylake and have it supported for a decent lifetime.
P

Hope that NBC get it reviewed soon, dying to see how 28w GT3e fares in gaming.
S

Does it have Intel modem?

Indeed, from what Intel-rival TSMC (NYSE:TSM) has disclosed about its 7-nanometer manufacturing technology (which is expected to go into production in the first half of 2018),
Click to expand...

* TSMC's 16nm has been in production since, idk, mid-2015
* If 10nm goes into production 2 years later, which would be pretty good considering even the best of them all, Intel, doesn't do as well, it's mid-2017 and 2018 for widespread availability.
* So 7nm will be even better and have a product cycle of only half a year?!

Remember that 16nm was once "expected" to go into production in 2013. We know TSMC's track record.
S

As reported at The Motley Fool, Intel&#8217;s latest 10-K / annual report filing would seem to suggest that the &#8216;Tick-Tock&#8217; strategy of introducing a new lithographic process note in one product cycle (a &#8216;tick&#8217 and then an upgraded microarchitecture the next product cycle (a &#8216;tock&#8217 is going to fall by the wayside for the next two lithographic nodes at a minimum, to be replaced with a three element cycle known as &#8216;Process-Architecture-Optimization&#8217;.

Intel&#8217;s Tick-Tock strategy has been the bedrock of their microprocessor dominance of the last decade. Throughout the tenure, every other year Intel would upgrade their fabrication plants to be able to produce processors with a smaller feature set, improving die area, power consumption, and slight optimizations of the microarchitecture, and in the years between the upgrades would launch a new set of processors based on a wholly new (sometimes paradigm shifting) microarchitecture for large performance upgrades. However, due to the difficulty of implementing a &#8216;tick&#8217;, the ever decreasing process node size and complexity therein, as reported previously with 14nm and the introduction of Kaby Lake, Intel&#8217;s latest filing would suggest that 10nm will follow a similar pattern as 14nm by introducing a third stage to the cadence.

From Intel's report: As part of our R&D efforts, we plan to introduce a new Intel Core microarchitecture for desktops, notebooks (including Ultrabook devices and 2 in 1 systems), and Intel Xeon processors on a regular cadence. We expect to lengthen the amount of time we will utilize our 14nm and our next generation 10nm process technologies, further optimizing our products and process technologies while meeting the yearly market cadence for product introductions.
Click to expand...

Is Skylake-C cancelled? If I Google it, it says Intel pulled the plug but then I saw this below:

Ice_Dragon said:
Is Skylake-C cancelled? If I Google it, it says Intel pulled the plug but then I saw this below:

Intel Kaby Lake and of course Intel Z270 in the market later this year!

The Skylake-based system obviously carries a non-trivial premium over the Haswell based one, but for a system that's going to be in use for a while, the superior platform and added performance of the Skylake chip are probably worth it. $70 over, say, 3-4 years is just not that much extra on an annual basis.

Additionally, it's looking as though Intel's upcoming Kaby Lake CPUs will work in Skylake motherboards, giving people building Skylake systems today a viable upgrade path (though how interesting such an upgrade will be remains to be seen).
Click to expand...

After their one story which reported "Apple cares about the environment, but wants us to buy new PCs", I'm starting to agree.

Ice_Dragon said:
Is Skylake-C cancelled? If I Google it, it says Intel pulled the plug but then I saw this below:

Same kind of rumor was present with Broadwell C I believe. Maybe C parts will be forever a year later from regular parts.

The only purpose for the top graphics SKUs seem to be is to experiment with bleeding edge technology and to allow it to propagate down to lower end parts. Also to spread the message that Intel has the top iGPU.