Skylake was officially published in IDF held in San Francisco in August (15th)
Click to expand...

Desktop Skylake-S Core i5 and Core i7 said:
Intel's 14nm Skylake processors and 100-series chipsets for desktops were unveiled in early August at Gamescom in Germany. Intel announced Core i7-6700K and Core i5-6600K as well as Z170 chipsets initially targeting gamers.
Gamescom is the major trade fair for video games held annually at the Koelnmesse in Cologne. 2015 edition was held on 5th-9th August.

The H110 chipsets were released between September 27-October 3, while the Q170 and Q150 chipsets are set for October or November.
Click to expand...

Desktop Skylake-S Core i3 and Pentium said:
Upcoming Core i3 standard-power SKUs are i3-6100, i3-6300 and i3-6320, and there will be also Core i3-6100T and i3-6300T low power processors. As can be seen from model numbers, Intel will continue to offer two lines of Core i3 microprocessors, possibly with different cache sizes and/or GPU types. 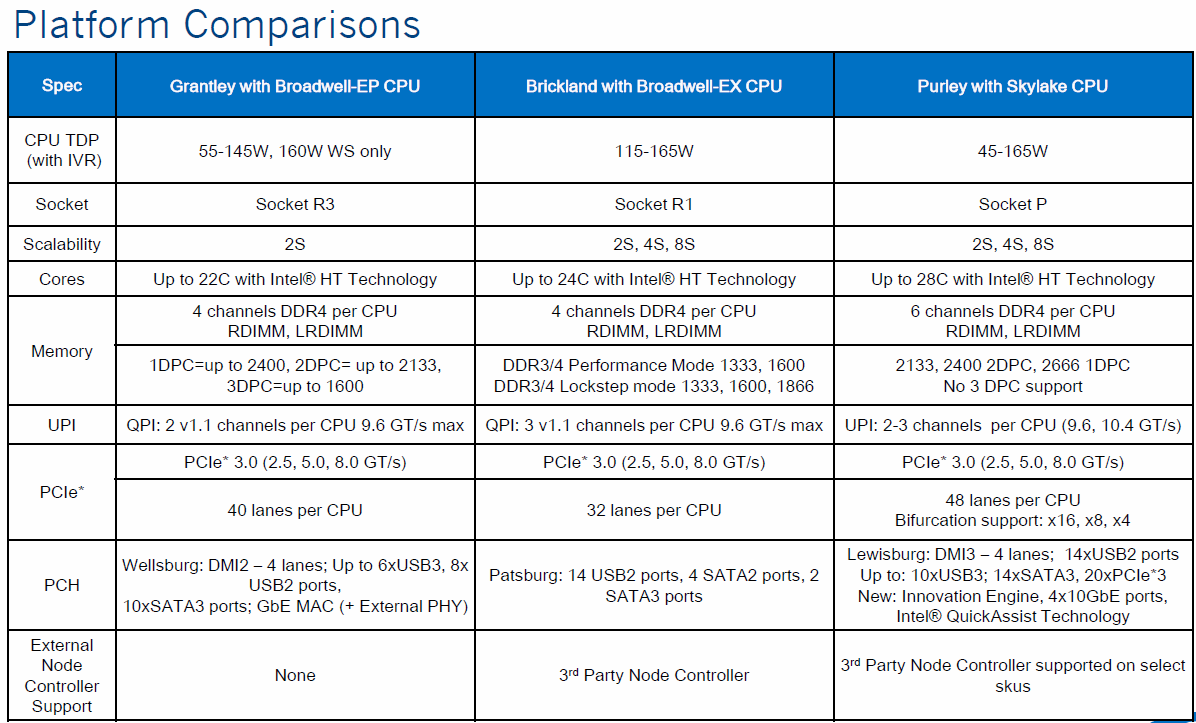 Results from PCLab's review, Haswell vs Skylake - both overclocked to 4.5GHz for an optimal IPC comparison.

Sandy Bridge to Haswell: 13.5%
Haswell to Skylake: 12.8%
Skylake is faster than Broadwell with eDRAM.

Here's results and quotes from another review, Eurogamer compared 4 generations of Core i5 running the latest titles at 1080p.
Core i5 6600K is their default choice for CPU intensive games.


Eurogamer said:
...a fully maxed GTA 5 is CPU-limited even on an overclocked Core i7 4790K, while certain scenes in the Witcher 3 on ultra settings can also cause difficulties for even the most powerful processor. Our contention is that more games like this will come along, and in demanding CPU titles, the Core i5 6600K will make a noticeable difference.

But in the here and now, the Core i5 6600K is a strong product - at worst it provides mildly enhanced performance over its predecessors, at best it's noticeably faster and should help to reduce CPU bottlenecking during gameplay. For those looking to buy or construct a new, capable gaming PC, the i5 remains the default choice and the 6600K is the best iteration yet - AMD's older eight-core FX chips are cheaper, but our tests clearly demonstrate that despite the low-power many-core set-up of the new console CPUs, modern games generally prefer the high per-core performance that Intel provides.
Click to expand...

In the games tested by Eurogamer Core i5 6600K (Skylake-S) provides a larger performance per clock performance gain than Core i5 4690K (Haswell) compared to Core i5 2500K (Sandy Bridge).

The first performance benchmarks of Intel&#8217;s next generation Skylake, Core i7-6700K have been leaked against the Devil&#8217;s Canyon based Core i7-4790K by TechBang. The results which compare the performance of the Core i7-6700K 14 nm processor versus the 22nm Core i7-4790K were tested on their specific platforms which include the Z170 for Skylake and Z97 for Devil&#8217;s Canyon.

The performance results can be seen below, do note that the Sisoft Sandra scores represent Core i7-6700K in blue and the Core i7-4790K in red. The performance results show significant gains over Core i7-4790K which is one of the fastest processor available in the market today. The Core i7-6700K scores around the same as a stock Core i7-5820K which is impressive since the latter is a 6 core beast in the Haswell-E lineup. Price wise, the processor is going to stick to the reference MSRP of unlocked flagships around $329-$339 US. The results are preliminary at the moment since proper BIOS and driver updates are yet to roll out for the CPU and iGPU.
Click to expand...

But even Skylake launch plan has been imminent, the hardware that can be achieved at the moment, drivers, software, etc., are not the final official version, including the protagonist Z170-Claymore motherboard versa. Therefore, we believe can only spy or two, is not the time to make absolutely commented, formal and more complete testing and comment, left various manufacturers then the arrival of the official product. Let us wait and see!
Click to expand...

Based on Broadwell-K's 3DMark 11 results and mikk's leak (up to 50% faster) we can roughly estimate how a ~65W TDP Skylake 4C+GT4e would perform under 3DMark 11.

Good stuff! HEVC, VP8, and VP9 -- should be good for mobile form factors, too!
S

Arachnotronic said:
Good stuff! HEVC, VP8, and VP9 -- should be good for mobile form factors, too!
Click to expand...

Indeed. I'm impressed they managed to keep 4GHZ base clock for the Core i7 6700K too. Bring on Skylake and Gen 9 Graphics.
Reactions: Drazick

Sweepr said:
Indeed. I'm impressed they managed to keep 4GHZ base clock for the Core i7 6700K too. Bring on Skylake and Gen 9 Graphics.
Click to expand...

Yup. I wonder what kind of perf/clock uplift Skylake will bring? If it's >=10% this will be a good release.
S

Arachnotronic said:
Yup. I wonder what kind of perf/clock uplift Skylake will bring? If it's >=10% this will be a good release.
Click to expand...

That would be pretty awesome.

I wonder what Intel's plans are with the "E" chips...hope we get more BDW-E leaks soon.

(I recently picked up parts for an X99 build that I'm planning on working on this weekend...hoping X99 will have a compelling upgrade path)

Sweepr said:
Indeed. I'm impressed they managed to keep 4GHZ base clock for the Core i7 6700K too. Bring on Skylake and Gen 9 Graphics.
Click to expand...

I think the low Turbo is more a testament of the both choice and that 14nm hopefully exhibits the tank of monster process that was 32nm.

Intel has no GHZ arms race anymore, so no need to go massively overboard with turbo creating more performance in segment such as ours.
They know we're gonna tinker like idiots and probably break one or two chips along the way anyhow.

Of course time will tell, but even if turbo could be 5,1 sustained i don't see why intel would give that for "free" for a segment such as HE Desktop.
S

Ajay said:
Yes! Low turbo (only 5% vs 10% on HW) is a bit concerning visa vi overclocking - may not be less headroom than HW
Click to expand...

It's a relief after all the negative hype from 14nm.
Reactions: Drazick

Sweepr said:
It's a relief after all the negative hype from 14nm.
Click to expand...

Ya, we just need what we get in terms of clock scaling with more voltage. The curve for 14nm is supposed to be flatter (lower increase in clocks for a given % increase in voltage vs 22nm). I'm guess that's why turbo is down from 10% to 5%.

Still, if SKL averages 15% better (or more) IPC over HW and still clocks to 4.5 GHz, it'll be a fast CPU (plus chipset features that should improve overall system performance).

What is a DT processor? DualThreaded?

witeken said:
What is a DT processor? DualThreaded?
Click to expand...

Where are those Gen9 graphics details that the title promised?

Also, where does this information come from?
S

Also, where does this information come from?
Click to expand...

Geez I hope that HEVC decoder is full hardware decode with 10 bit support.

And then I hope for no bugs (like the 24p bug) and good Linux drivers.
I

If this is true, I'm disappointed. Come on, still only a x4 PCIe/DMI 3.0 link to the PCH? A half decent PCIe 3.0 x4 SSD will saturate that. Forcing one to use PCIe lines from the CPU for maximum performance. Again.

Guess I'm going Skylake-E for my next build...

Ajay said:
Yes! Low turbo (only 5% vs 10% on HW) is a bit concerning visa vi overclocking - may be less headroom than HW
Click to expand...

Dammit people. If you want to use French, at least spell the words correctly. It's "vis-à-vis", not "visa vi", which are a credit card and a text editor.
S

If 10nm is not coming till 2017 I think we can expect another Devil's Canyon style refresh and Iris Pro GT4e variants next year. Core i7 6700K probably packs GT2 graphics.
Reactions: Drazick

jhu said:
Dammit people. If you want to use French, at least spell the words correctly. It's "vis-à-vis", not "visa vi", which are a credit card and a text editor.
Click to expand...

Thanks, my bad. BTW, it's accepted in the English language, though with the correct French spelling (like so many other foreign sayings adopted by English speakers).
M

Apart from the SKUs the slides are not new to me. The only difference here is that they removed OpenGL 5.0. 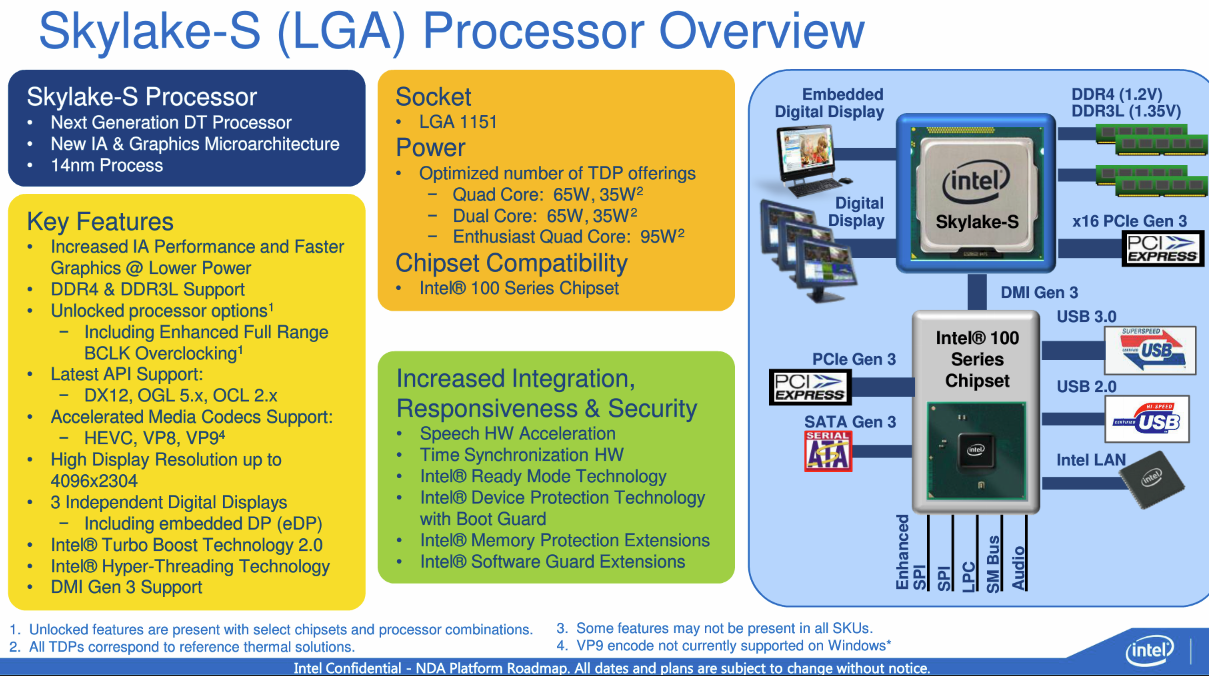 PCs based on Skylake will start shipping in the second quarter this year, though it isn't clear when laptops will start getting wireless charging and other features.
Click to expand...