HomerJS said:
If you are black it does
Pamela Moses granted new trial after being sentenced to 6 years for illegally registering to vote (yahoo.com)
Click to expand...

Though the charges of illegal voting have been dropped, Moses will remain banned from voting due to previous felony convictions.
www.usatoday.com
Reactions: soundforbjt, HomerJS and hal2kilo

Though the charges of illegal voting have been dropped, Moses will remain banned from voting due to previous felony convictions.
www.usatoday.com
Click to expand...

Still can’t believe they were going to charge her for the state’s own mistake, and then had the gall to withhold information from the defense. But it’s the home state of Nathan Bedford Forrest so not surprised.

Though the charges of illegal voting have been dropped, Moses will remain banned from voting due to previous felony convictions.
www.usatoday.com
Click to expand...

Good to hear. We still have Crystal Mason who got 5 years. Let compare that to Mark Meadows who...

"I do believe there was a lot of voter fraud," the registered Republican told investigators, claiming she had not cast an illegal ballot.

Good to see Dems fighting back.

State Democrats submitted more than 250 pages worth of complaints ahead of the deadline to challenge candidates' nominating petitions, accusing candidates James Craig and Perry Johnson of submitting forged signatures and fellow Republican candidate Tudor Dixon of a disqualifying error. Candidates must submit at least 15,000 voter signatures to qualify for the ballot, but Democrats say Craig and Robinson used dead people's names and names of people who are not registered to vote, and in some cases had people sign multiple petitions. The complaints accused the two candidates of using a team of campaign workers to sign petitions using names and addresses of unwitting residents.

"I do believe there was a lot of voter fraud," the registered Republican told investigators, claiming she had not cast an illegal ballot.

I read this it's insanity. Not sure how she got off without going to jail.
https://apnews.com/article/2022-midterm-elections-arizona-voting-donald-trump-fccf49382e78c012bc787d6a9f38ea7d

“What we’re hearing is voter fraud is out there,” Lawson told the judge. “And essentially what we’re seeing here is someone who says ‘Well, I’m going to commit voter fraud because it’s a big problem and I’m just going to slide in under the radar. And I’m going to do it because everybody else is doing it and I can get away with it.’

“I don’t subscribe to that at all,” he said. “And I think the attitude you hear in the interview is the attitude that differentiates this case from the other cases.”
Click to expand...

When does the trial begin? Am I asking too much?

HomerJS said:
When does the trial begin? Am I asking too much?
Click to expand...

Why so divisive? We need to move past this and heal as a nation.
Reactions: hal2kilo and uclaLabrat

dank69 said:
Why so divisive? We need to move past this and heal as a nation.
Click to expand...

dank69 said:
Why so divisive? We need to move past this and heal as a nation.
Click to expand...

Reactions: Meghan54, KMFJD, dank69 and 2 others

A number of examples of the Michigan candidate petition problems can be seen at the link below, including whole pages that were the same but for different candidates. 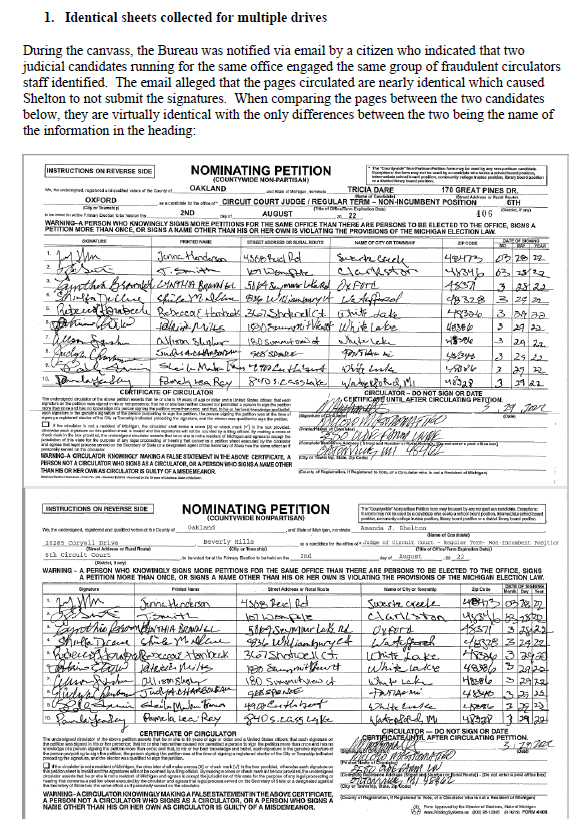 “Died prior to the date of signing”: Report finds 68,000 invalid signatures

The Michigan Bureau of Elections says it has found an unprecedented number of invalid signatures by candidates attempting to run for office. Officials say their investigation found an estimated 68,…

Possibility the campaigns were not involved:

"The bureau said it was working to refer the fraud to law enforcement for criminal investigation.

“At this point, the Bureau does not have reason to believe that any specific candidates or campaigns were aware of the activities of fraudulent-petition circulators," staff wrote.

The bureau identified 36 circulators who submitted sheets consisting entirely of invalid signatures across at least 10 campaigns, including for governor and local judgeships. Staff did not flag a reason for the fraud but noted the difficulty securing circulators and signatures for campaigns and ballot initiatives nationwide during the pandemic. Circulators often are paid per signature.

Staff identified an unusually large number of sheets with every signature line completed or that showed no normal wear such as folds, scuffing or minor damage from rain. They flagged sheets on which handwriting of certain letters across different signatures and information was near identical. Staff also reported an unusually high number of signatures corresponding to dead voters and to addresses where living voters no longer live."