I think all of this talk of execution resources, buffer sizes, etc etc is all rather superfluous. GLC/RPC use significantly more transistors than Zen 4 (with higher power to match) yet doesn't have anything significant (IPC, meaningful frequency gap) to show for it. I think it's thus fair to conclude that GLC is bloated. The fact that they seem to be more or less reusing it until '24 doesn't make it look any better today. The opposite, if anything.
Reactions: Thibsie, lightmanek, Elfear and 6 others
0

I laughed a bit. AMD is on a roll:

It would seem that the AGESA ComboAM5PI 1.0.0.4 firmware has difficulties distinguishing the single-CCD Ryzen 5 7600X samples from the dual-CCD ones. It's plausible that it doesn't correctly recognize the CCD and, as a result, disables one of the processor's cores. According to the chi11eddog, the firmware locks down Core0.
Click to expand...

Exist50 said:
There's no evidence for that particular change to Zen 4c.
Click to expand...

It fits logically though.

current density of Zen 4 is 94M xtors / mm^2. At that density the Zen 4c CCD would be around 117mm^2 (based on 11B xtors which is 2x Zen4 with 2B removed because L3 cache is not doubled) which is just too big so density must be higher and not by a small amount either. Now you might argue it will be fewer transistors than that because clocks are going to be lower and it may be a bit lower but to hit 80mm^2 at 94M per mm^2 needs to CCD to be no more than 7.5B transistors. With 32MB cache that is just 5.5B transistors for 16c. It just does not look doable, at least not while still being called Zen4.

On Bergamo you may only have 8 CCDs to fit but you have twice the links because the IO die is connected to each CCX so rather than the 12 CCXs you have in Genoa you need links for 16 CCXs, more if there are 2 IO dies (which with Siena would make perfect sense, 1 for Siena for upto 64 cores and 2 for Bergamo for upto 128 cores) so they can talk to each other and act as 1.

What you get with APU transistor density is 11B fitting in 79mm^2 which seems far easier to fit for both Siena and Bergamo.

It also fits because the APU CCX has been designed, tested and is in production so re-using that block and just doubling them up gives you a huge head start in designing the Zen 4c CCD and is pretty standard for AMD to do given they like to use as much as possible as wide as possible.
Reactions: lightmanek
0

coercitiv said:
I laughed a bit. AMD is on a roll:

Something is seriously off at AMD right now. Did they hire too many too quickly?
0
L

moinmoin said:
Something is seriously off at AMD right now. Did they hire too many too quickly?
Click to expand...

Probably, I was thinking the same. Even if people is experienced, it takes time to be trained in the specific job.
Reactions: lightmanek
0
N 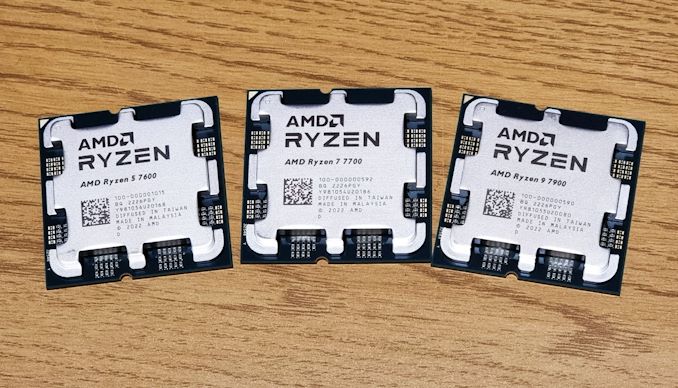 Ryzen 5 7600 is AMD's most-affordable Zen 4 processor. It retails for only $230 and even comes with a heatsink. The testing in our review confirms that the performance difference to the more-expensive 7600X is minimal, and gaming performance even beats the 5800X3D.

Impressive Performance/Efficiency. The 7700 is within 2% performance of the 7700X

As expected, Wraith Prism RGB cpu cooler is very good for CPU-s with lower TDP.Again Cinebench R23, and what are the CPU temperatures in the classic CPU rendering test.

coercitiv said:
I laughed a bit. AMD is on a roll:

moinmoin said:
Something is seriously off at AMD right now. Did they hire too many too quickly?
Click to expand...

Nah, it seems to be more or less in line with the previous releases.

Early Zen 1s were replaced due to an errata causing segfaults.
Zen 2 era got boosting issues resulting in the meme "ABBA" version.
Zen 3 era got those endless USB port issues.

RDNA1 got endless stream of those black-screen reports.
Early RDNA2 got problems with power management.
RDNA 3 is... RDNA3.
0
E

The 7950X is likely more efficient when run at lower power limits. I know it is a beast when TDP is set to 65W. AMD likely does not use the best dies with these non-X chips.
Reactions: Lodix, lightmanek, inf64 and 2 others
0
E

yuri69 said:
Early Zen 1s were replaced due to an errata causing segfaults.
Click to expand...

IIRC, that particular issue was that their hardware random number generator was stuck to all 0s, or something like that. Don't recall where I heard that, but it's kinda funny.
Reactions: Mopetar
0

Exist50 said:
IIRC, that particular issue was that their hardware random number generator was stuck to all 0s, or something like that. Don't recall where I heard that, but it's kinda funny.
Click to expand...

Well, it's not that funny when you need it for Crypto/ISEC 😉
Reactions: yuri69
0
N

I would be very surprised if AMD just used APU desing(half L3) to get the space required to put 128 Cores worth of die area on the same package as Genoa.
Last edited: Jan 9, 2023
0
I

non X's look good, now all we need is some good prices for GPU's more lower tier MB options and it might be worth upgrading..........
Reactions: Kaluan, lightmanek and Thunder 57
1
N

itsmydamnation said:
non X's look good, now all we need is some good prices for GPU's more lower tier MB options and it might be worth upgrading..........
Click to expand...

We have enough information already but let me add one more graph. Didn't Computerbase.de not too long ago publish a chart that showed 7700X, 7900X, and 7950X at same performance rating at 45W? I thought someone linked that chart here. This is a new chart apparently.

A while back in the thread, @Timmah! and I discussed the labelling design for the Ryzen processors (see post #7386).

In the latest design, seen in 7950X3D, note that they have made the font for "RYZEN" taller (also, the stroke width is reduced and corrected, for a lighter look and a more balanced "Y" in particular, which looked somewhat puny and out-of-place before). For the full product name, they have condensed the font and made the word spacing wider. For the product details, they now use a nicer condensed font. They have dropped "DIFFUSED IN TAIWAN" altogether, for less clutter. And the whole thing is nicer aligned.

Edit: I think it looks pretty nice now, but I still would want to get rid of the repetition and make the model number larger instead. While they keep using the tier number in the product name, which I think is awful (AMD even gets it wrong in keynote presentations), they could make it more distinct, e.g. by putting it in reverse. Something like this:

Note that I have reduced the size of the AMD logo slightly, so that the AMD arrow now sits centred above the "Z" in "RYZEN", as well as centred on the chip overall. I think this looks nicer and more balanced. I have moved the out-of-place "D" (for "demo sample", I presume) behind the SKU number, as to be less disruptive. Also note that the tier number is fittingly aligned below the "Y" (get it? Read vertically: "AMD, why 9?").
Last edited: Jan 12, 2023
Reactions: Panino Manino, Joe NYC, Schmide and 5 others
0

StinkyPinky said:
I feel like the 7900 makes the 7900X redundant. If you want more multi-threaded power then it's the 7950X anyway, and if you want a nice mix of cores and gaming on a lower budget the 7900 seems like the no brainer choice over the 7900X.
Click to expand...

Depending on were the retail price of the X processors go, there is no reason to get one over the none X parts.
0
E

biostud said:
Depending on were the retail price of the X processors go, there is no reason to get one over the none X parts.
Click to expand...