"THE GOVERNMENT has confirmed that the full diplomatic weight of the Irish Republic and all its resources could pressure the Egyptian government into freeing Ibrahim Halawa if only he was a decent looking young blonde woman from Dublin 4, or the surrounding south Dublin areas.

“Honestly, you wouldn’t believe how quick we’d be willing to act if Ibrahim’s name was pronounced Ciara, Shona or Roisin,” explained a source within the Department of Foreign Affairs.

“You’d be very impressed by the forceful hand we could play in this situation if it involved someone whose Facebook profile pictures made them look the perfect combination of white, female, virginal and a fine young thing,” added the source, “despite the fact he’s an Irish citizen, he’s sadly not the right kind of Irish citizen”."
Reactions: KMFJD, IronWing and Victorian Gray

Chiropteran said:
Ah I get it. You truly don't even understand what an idiom is. I guess that makes you an idiot.
Click to expand...

They are picking on you by being pedantic and not following the basic rules of intellectual honesty.

To be clear, you are generally wrong: but they are piling on here without reason because you are the "enemy." No rational argument will bring the mob back off of you: sorry.

DixyCrat said:
They are picking on you by being pedantic and not following the basic rules of intellectual honesty.

To be clear, you are generally wrong: but they are piling on here without reason because you are the "enemy." No rational argument will bring the mob back off of you: sorry.
Click to expand...

We're "picking on" him because he's absurd. He played his part in it.
V

A whole bunch of folks need to read the 1st post in this thread again.

In case you have trouble finding your way there:

and, to get back on topic myself And this doesn't help.
V

MomentsofSanity said:
Well. This USED to be a fun thread. Ca we maybe take this stuff elsewhere?
Click to expand...

Fun? This is P&N fool! There will be no fun here!


Amused said:
My walls of text beats your walls of text. You have a lot of work ahead of you if you want to properly explain away all 172.
Click to expand...

ETA on when this will become a standard thing with every president/cabinet member/local govt official? Pretty easy to throw a wiki together for any given person... Man the hypocrisy being exposed this week is just astounding.
Reactions: ch33zw1z

Chiropteran said:
So uh, what were you talking about exactly?

When he said he was being tapped by Obama? (proven true, thanks Rice)

When he said he paid his taxes, and was worth billions? (proven true, thanks to the "leaked" tax return)

When he said ... BLAH, I can't waste my time on this, here is a simple copy/paste.

PROMISES MADE AND KEPT SO FAR:

Campaign Promise 1: To replace Antonin Scalia with a like-minded justice from a list of 20

Campaign Promise 3: To defund and crack down on sanctuary cities

Campaign Promise 5: To pull the US out of the TPP, an Obama-era trade deal detrimental to the US

Campaign Promise 11: To protect our policemen, the true everyday heroes

Campaign Promise 12: To crackdown on illegal immigration and to BUILD A WALL

Campaign Promise 14: To enact a five year lobbying ban on government Officials after they leave office

Campaign Promise 15: To crackdown on drug cartels and illegal drugs crossing the border

Campaign Promise 16: To revitalize the dying coal industry in the US

Campaign Promise 17: To create American JOBS and bring companies back to America

-Kroger has promised over 10,000 new jobs in the era of Trump

Campaign Promise 18: Pushing NATO allies to pay their fair share or face the reality of the US possibly leaving

Campaign Promise 19: To make America energy independent, relieving us from our dependence on foreign entities, such as OPEC

Campaign Promise 21: Trump could be the president that takes us to Mars!

Campaign Promise 22: To undo many of Obama's unconstitutional Executive Orders

Campaign Promise 23: The repeal and replacement of Obamacare. The recent GOP fallout of AHCA Plan was no fault of Trump's. The blame solely belongs to Speaker Ryan. He created a shit bill and couldn't even capitalize to get enough votes. Obamacare will crash in 2017 when individual mandates kick in and Democrats will be to blame. That is when Trump will truly work to Repeal and Replace it with a plan he promised us.

Campaign Promise 24: To "Bomb the shit out of ISIS"

Campaign Promise 25: To not take a salary as President

ACTIONS NOT PROMISED ON THE CAMPAIGN TRAIL, BUT HAVE BEEN PUT IN EFFECT: 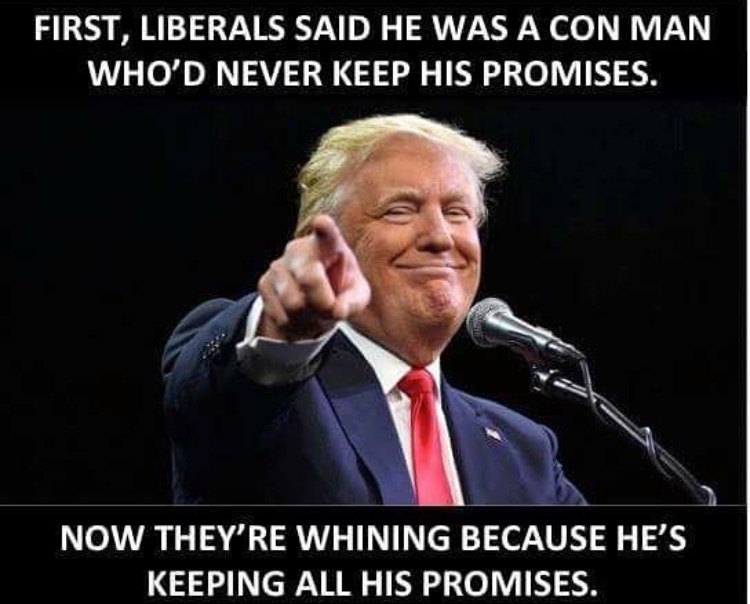 Alright guys less talk especially long post like this and more pictures. I have no authority here other then I did not start the thread for arguments. Just post you pic/video and move on.

what the hell is on that tv? Is it that "Arrival"?

MomentsofSanity said:
Man the hypocrisy being exposed this week is just astounding.
Click to expand...

Agreed. After blasting Obama for golfing and his actions in Syria, Trump goes ahead and does the same. 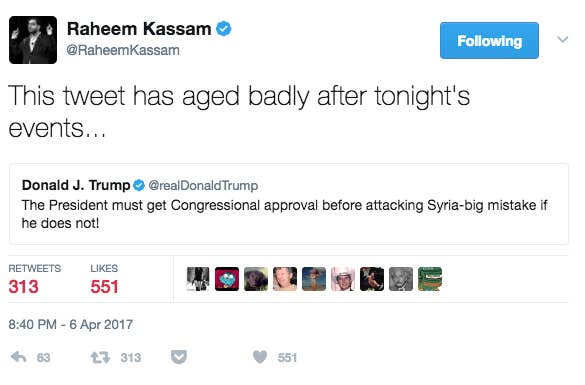 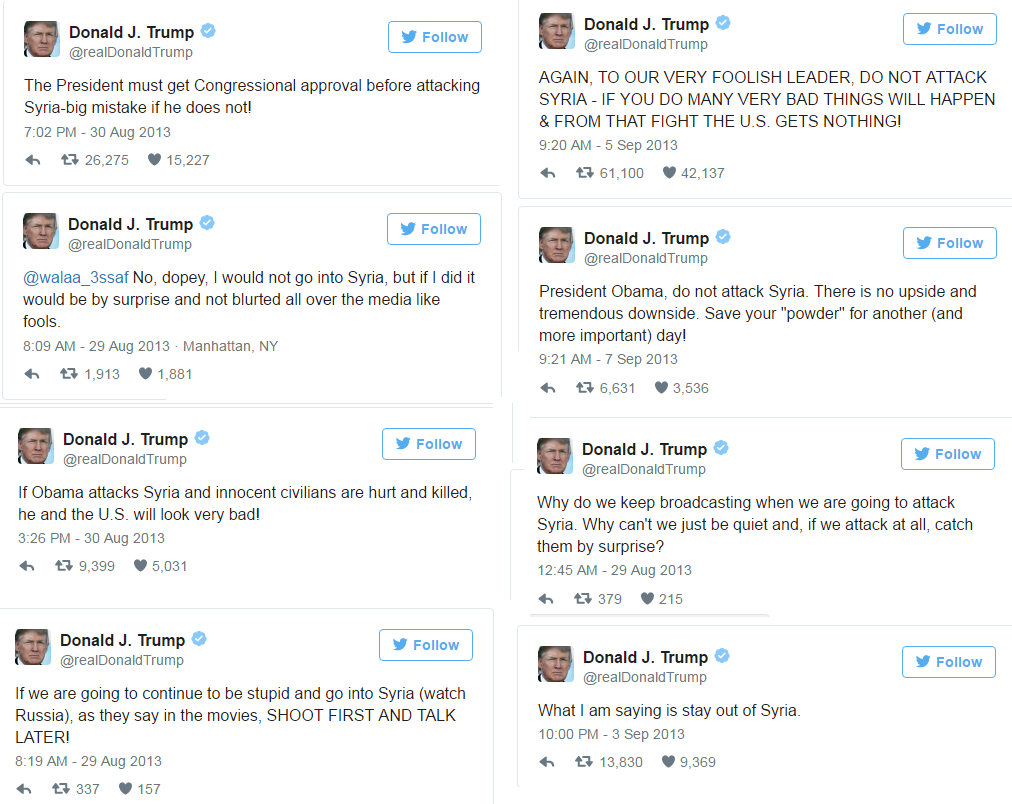