They should cancel Cannonlake completely. Year end 2018 means this would be a 2019 product if it comes. In year 2019 such Dualcore SKU even for 15W doesn't make sense. I would prefer KBL 4C and if I need more GPU horsepower go with Nvidias MX150.
Click to expand...

In June Cannon Lake was on track and Ice lake was taped in.

Yields are horrific. I guess they won't "cancel" Cannonlake but they will continue working on it mostly to improve Icelake's chances of being released.

Not at 5W though.

Kaloi48 said:
It looks like 10nm Cannonlake has been delayed again.

Intel reschedules Cannon Lake launch to year-end 2018, say sources
http://www.digitimes.com/news/a20170920PD207.html
Intel has reportedly rescheduled the release of its next-generation Cannon Lake-based processors to the end of 2018, which has already affected notebook brand vendors' new projects and their suppliers, according to sources from the upstream supply chain...
Click to expand...

Even if this is true - I doubt Ice Lake will be affected since it's on 10nm+. If, somehow, Intel borked 10nm+ then, just wow! 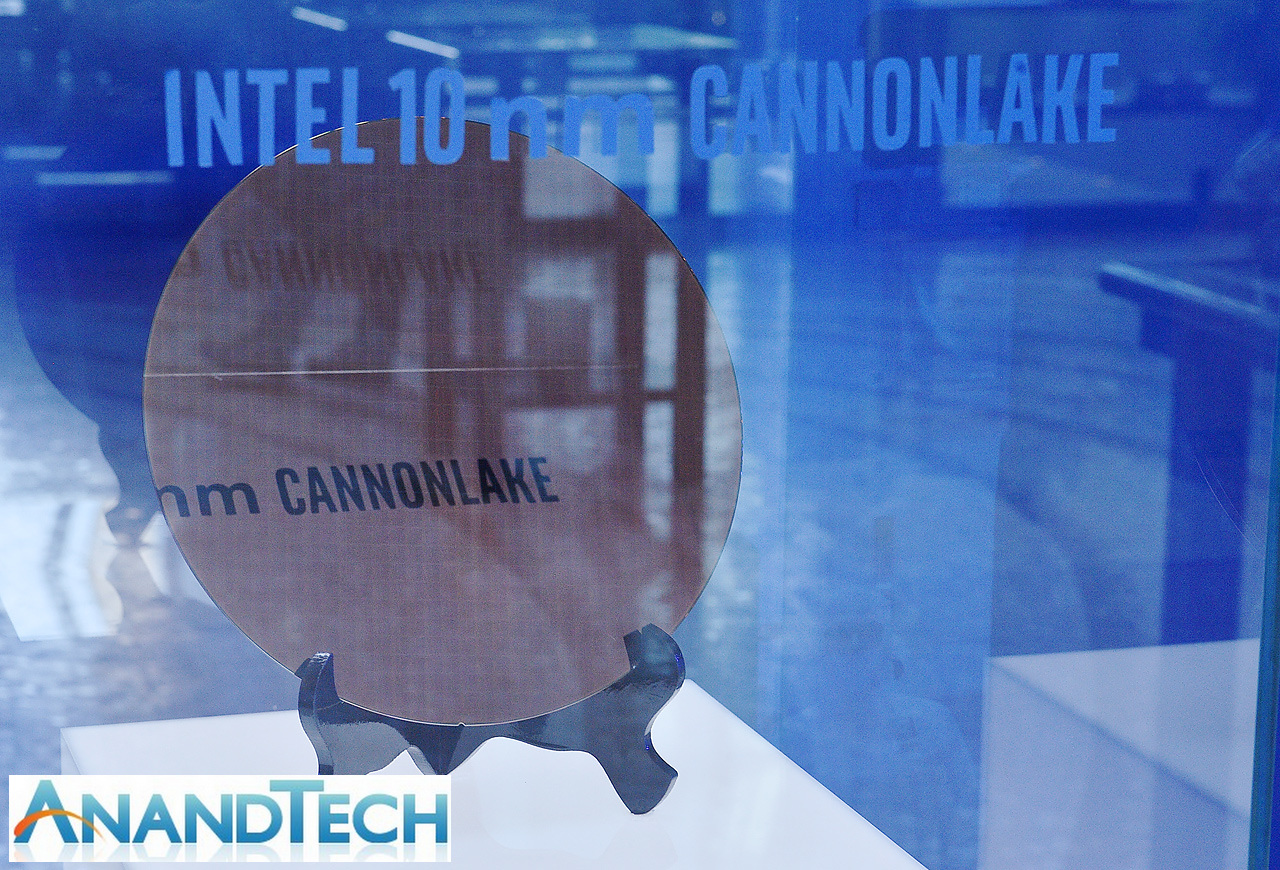 Here is the new die shot he was referring to

"Manual counting puts the wafer at around 36 dies across and 35 dies down, which leads to a die size of around 8.2 mm by 8.6 mm, or ~70.5 mm2 per die. At that size, it would suggest we are likely looking at a base dual-core die with graphics: Intel's first 14nm chips in a 2+2 configuration, Broadwell-U, were 82 mm2, so it is likely that we are seeing a 2+2 configuration as well. At that size, we're looking at around 850 dies per wafer."

As its manual counting I expect it to be off but some margin
Reactions: Bouowmx
J

In any case, any decision to not-cancel-cancel Cannonlake must have been recent.

In any case, any decision to not-cancel-cancel Cannonlake must have been recent.
Click to expand...

The current GT2 has only 24 EU. Sky/Kaby is like 92 mm2. I don't know how much the additional Gen10 changes would have caused the die to increase. Cannonlake in theory could also have the full PCH integrated although that seems unlikely now.

jpiniero said:
Not at 5W though.
Click to expand...

Now this claim from Intel actually seems incorrect/implausible given logic scales 2.7x and SRAM 0.6x, and IO probably won't scale more than 0.5x probably (it scaled by ~0.55x for 14nm iirc). But in any case that's still about 2.2x, so x'tor count would have gone up by 60%, which is a lot.
Reactions: Ajay

I am guessing we might see extremely limited launch in Q4/Q1 like they did with Broadwell Core M. It'll probably disappoint just as much considering the huge issues they are having.

The HP CEO that screwed the company got replaced in one year. BK is staying for too long. Is the company in denial they have problems because they have all-time record revenues?

Now this claim from Intel actually seems incorrect/implausible given logic scales 2.7x and SRAM 0.6x, and IO probably won't scale more than 0.5x probably (it scaled by ~0.55x for 14nm iirc). But in any case that's still about 2.2x, so x'tor count would have gone up by 60%, which is a lot.
Click to expand...

We may see this in subsequent generations(ie. Icelake) or simpler chips like Atom ones.

But based on the specs they released for the transistor itself, without a redesign the density improvement is probably 2x. Things like COAG and single dummy gate may need cooperation with the design team to realize the advantage.

With Broadwell we did not see the gain claimed either. It was better than expected, but that's about it.

~50mm2. 40% increase from graphics overhaul and other small enhancement seems to make sense.
B

Does this approximation of Cannon Lake 2+2 make sense?

DigiTimes is unreliable, but then again it seems many people were predicting a Cannonlake delay. So would this truly mean no 32 GB MacBook Pro until 2019 if it turned out to be true?

I find it interesting that my Core m3 MacBook has the same amount of RAM as the top of the line MacBook Pro. Interestingly, on the Mac side, it isn't so much the CPU speed people have been wondering about, it is the lack of a 32 GB RAM option.

Intel's problems might go back all the way as early as the 22nm generation. On their presentations they say 8 quarters is the optimal time for revenue and design.

They have kept that schedule until 32nm. Then on the next process...

Even back with 32nm it wasn't supposed to arrive that early. 32nm was supposed to be Q2 2010. Then the 45nm mainstream parts faltered. 32nm went well and they were able to make 32nm mainstream chips in Q1. There were rumors that there might be a 3rd 32nm part at one point though.

This was also about the time when mobile wars were heating up. Intel started dedicating their resources to compete in it. 22nm was the official mobile optimized node. Maybe this loss in focus was the real problem. They basically shifted their focus from PC to mobile, which meant PC parts took the hit.

Does this approximation of Cannon Lake 2+2 make sense?
Click to expand...

We won't know until its released. And, we have to find a die shot too.

Intel have denied that cannonlake is delayed to EOY2018
Reactions: Ajay
J

Yeah but for all intents and purposes if all they can make is 2+0 models then it may as well be delayed. I'm not sure what they would brand no IGP models but they could in theory sell Celerons and Pentiums if they manage to get enough chips with a functional fixed function unit even if most or all of the EUs are busted.

I can't imagine a market where a low power mobile chip without integrated graphics can be sold.

Hopefully late-2017 launch means we'll see Core M chips based on Cannonlake, with dual core U chips without iGPU later on, and bigger parts even later on.

I haven't been following mobile releases and was wondering when we will see true CFL and/or CNL CPUs in laptops? No KBL refresh. I have time but am looking for one for my family.
J

TheF34RChannel said:
I haven't been following mobile releases and was wondering when we will see true CFL and/or CNL CPUs in laptops? No KBL refresh. I have time but am looking for one for my family.
Click to expand...

January for Coffee Lake. Note that Coffee Lake U is only available in 4+3, so it'll be more expensive and hard to find.

jpiniero said:
January for Coffee Lake. Note that Coffee Lake U is only available in 4+3, so it'll be more expensive and hard to find.