zerocool84 said:
The both blue looks really good, I don't like that they came with one of each color. When I order some more Joycons they will definitely be blue.
Click to expand...

Yeah I got the grey one initially because I didn't like the two tone neon set, but I saw a mock up of the blue only and I knew I had to have it. Can't wait for ARMs with two Joycons, my wife is pumped to play it.

Side note- my Best Buy had plenty of Pro Controllers last night even when I was at the end of the line. Actually looks like the rare accessory is the charging grip. What mistakes are they referring to in those articles?

purbeast0 said:
What mistakes are they referring to in those articles?
Click to expand...

In the polygon article it was about Nintendos handling of online services. I didn't read the first.

I personally didn't think the Wii U online was bad. It was free and I never had any lag issues.
C

I ordered bomberman. Still waiting on delivery though.

I agree it seemed overpriced, but I really wanted at least one game that supported 4+ players. And I had a lot of fun playing the original on NES back in the day.

renz20003 said:
In the polygon article it was about Nintendos handling of online services. I didn't read the first.

I personally didn't think the Wii U online was bad. It was free and I never had any lag issues.
Click to expand...

It's mainly because we are all beta testers, that's why there's hardly been any information about the Switch other than the basic stuff. If it was truly ready to launch they would have confirmed or denied a lot or stuff instead of always saying, "We have nothing to announce at the this time."
Reactions: poofyhairguy

Chiropteran said:
I ordered bomberman. Still waiting on delivery though.

I agree it seemed overpriced, but I really wanted at least one game that supported 4+ players. And I had a lot of fun playing the original on NES back in the day.
Click to expand...

My buddies and I have an old school game day every month or so, and we always end up playing an iteration of Bomberman 4 or 5 player on SNES emulator for a couple hours.

Gahhh, only Bomberman has shipped for me, my Switch and Zelda are still waiting to ship. Come on Amazon!!!

I always have more expensive stuff shipped to me at work, I'm off work at 3pm so if I don't get it today it won't be until Monday........ NOOOOOOOOO

The blue does look really good. I ordered the all gray one, but will probably grab two red controllers in the future, as my son loves the color.

Still waiting for mine... Now to leave work early even though I'm out 6 days starting Monday...

I probably won't be able to play it until my wife gets home anyways since I'm on Daddy duty.
G 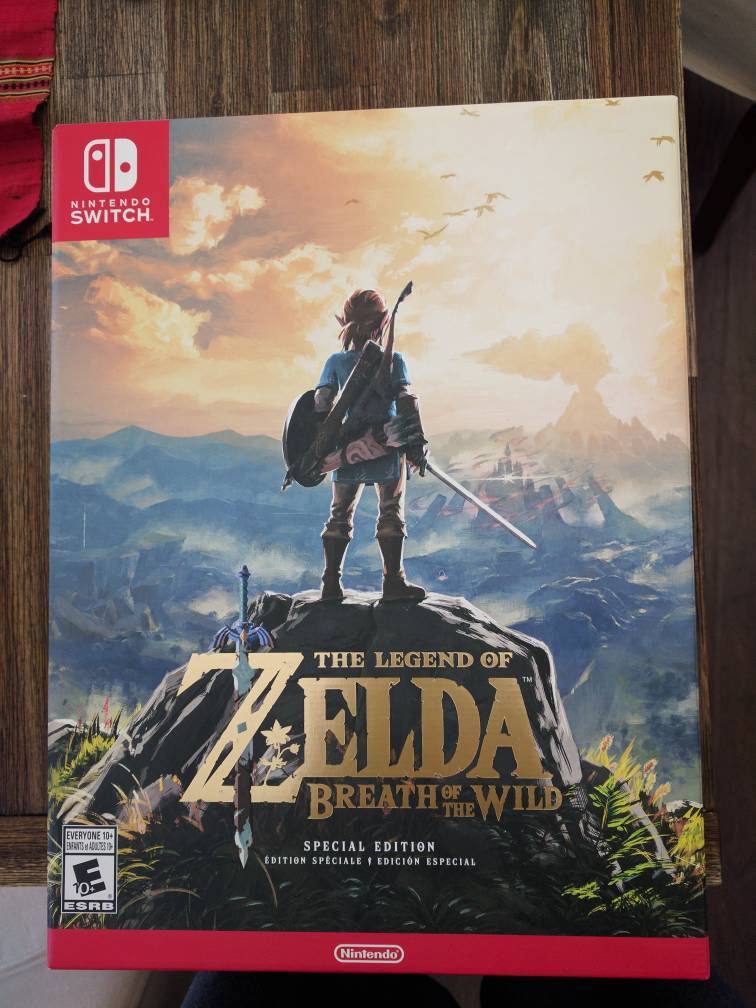 The switch case is really high quality with 2 compartments for games and stuff and the switch. Case is super thick. Much better than the stuff they had at gamestop by itself. 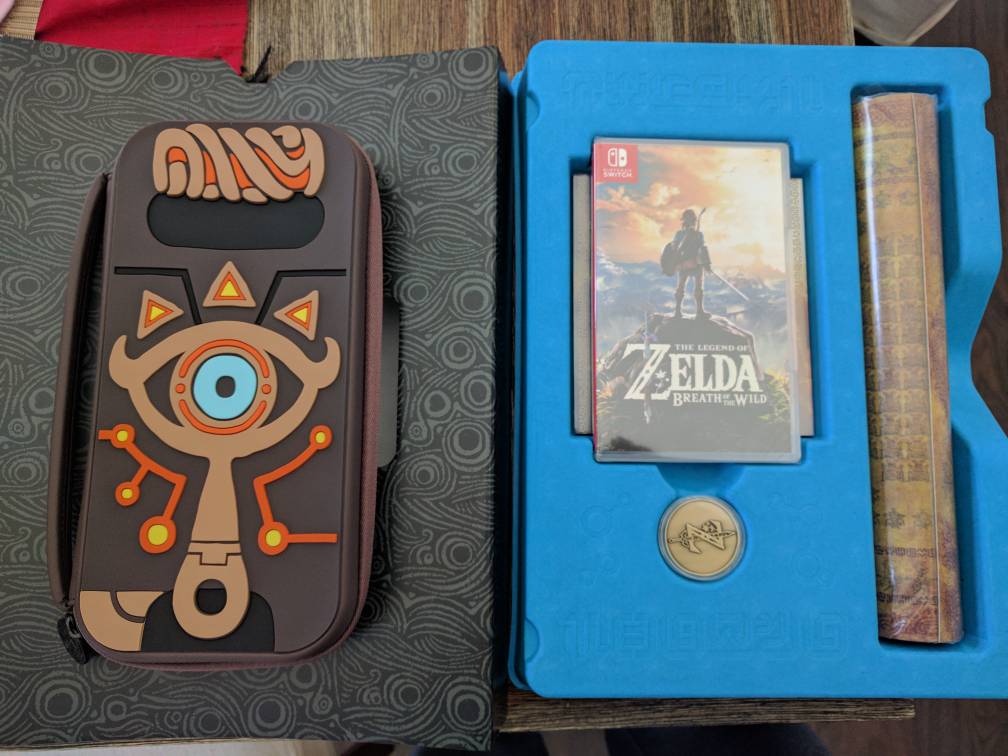 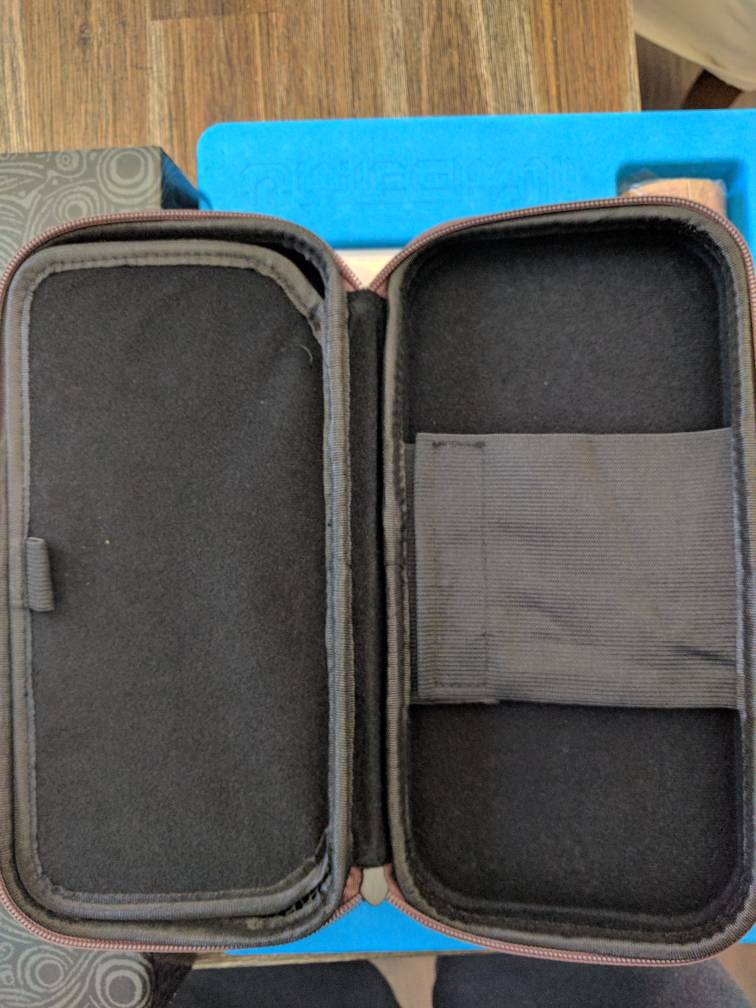 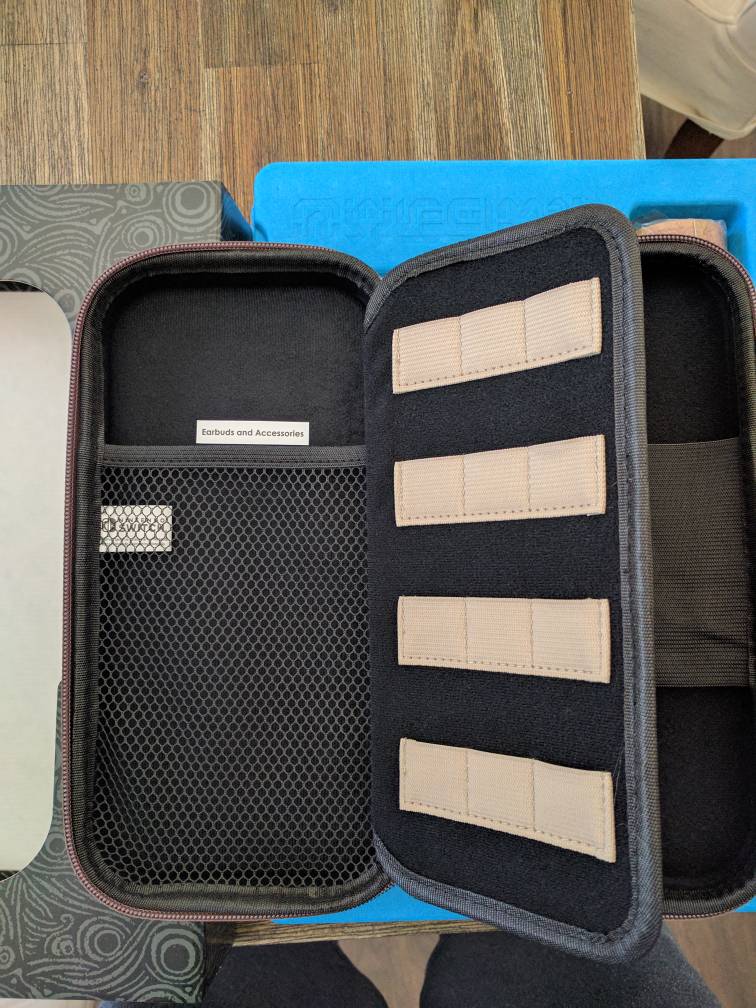 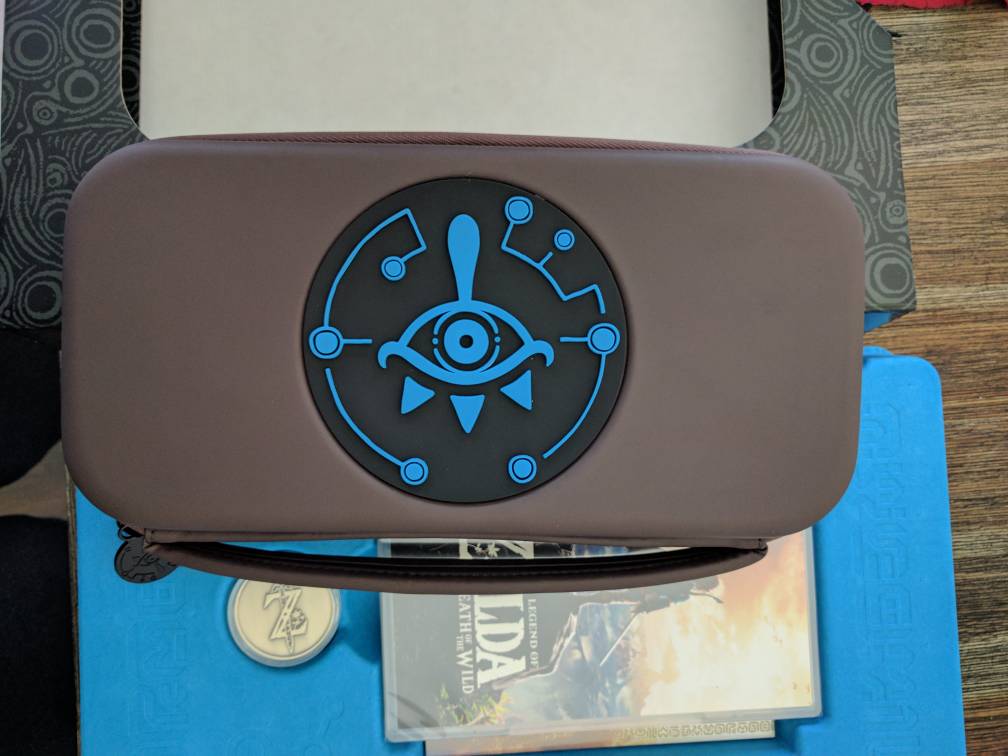 The switch case is really high quality with 2 compartments for games and stuff and the switch. Case is super thick. Much better than the stuff they had at gamestop by itself.

Case looks awesome, main reason why I ordered the special edition as well.

How is that case any different then the 3ds cases?
N

I drove around town earlier this morning to the nearby Best Buy, Target, and Walmart. All I managed to get was a Special Edition Zelda from Target. Corner was dented a little, but it's ok. No consoles or pro controllers to be found. Going to try Toys R Us and another Best Buy after work.

Zelda is really fantastic so far. It's like a perfect mixture of all their best games with a little extra thrown in.
G

poofyhairguy said:
Zelda is really fantastic so far. It's like a perfect mixture of all their best games with a little extra thrown in.
Click to expand...

I love how it doesnt hold your hand. Just throws you out there in the wild no pun intended lol.

poofyhairguy said:
Zelda is really fantastic so far. It's like a perfect mixture of all their best games with a little extra thrown in.
Click to expand...

I only played for like 30 minutes and have no clue what I'm supposed to do. I set the waypoint on the thing but then I removed it by accident and have no clue where to go lol. I just fought some guys and had to turn it off after I battled a few. Going to get back into it more when my wife gets home and can watch our son.

Graphics are pretty bad on Zelda when docked. The framerate dips easily when walking through brush and having just 1 enemy on the screen. The controls feel clunky thus far just because I am not used to them, but damn I'm glad I got the pro controller. The joycons are A LOT smaller than I thought they would be. They feel okay in the grip but it just feels makeshift lol.

Looks like Amazon in Europe and here in the States are having shipping issues.

I talked to Amazon chat and mine wasn't shipping today until I talked to them so any time from now until 8pm Pacific time it could arrive at my work address. My work closes at 4pm so overtime for me.
C

Initially disappointed with bomberman. That might be because I was trying to let my 3 year old son play and he died almost instantly every time, as might be expected. I'll have to play through the single player stuff later to get back into the feel for it, and play with someone a little bit older Performance was disappointing, lots of "loading" delays for no obvious reason given the graphic quality of the game.

Zelda was fantastic so far. I don't know if I am not observant enough or what but I didn't notice any fps drops in the 10 or so minutes I played. I thought it was pretty funny how the first item you get is basically a nintendo switch tablet. I reached the navigation point which turned into a tower. Climbing down the tower I messed up and fell to my death 3 times before I decided to take a break. I'm sure it's not that hard, but I just wanted to try the other games.

Fast RMX was the most successful game as far as my son was concerned. To some extent, he could just hold the throttle button down and race around the track more or less, crashing occasionally. Performance of the game seemed great.

Snipperclips seems like the perfect "learn to use a controller" game for my son. Just going through the tutorial forced him to learn how to move around with the joystick. He also found it hillarious whenever he or I completely "snipped" the other player. I think this one will be a lot of fun for the money.

For the record, never had a problem with controllers being unpaired. Sofa is about 8-10 feet from the TV, so I guess that isn't much of an extreme range test. I really like the feel of the controllers, while small they have a certain weight to them that just feels high quality.
Reactions: poofyhairguy

So the Joycon issue is like the iPhone you're holding it wrong issue. It feels like the issue is that there isn't much power for the Bluetooth radios. Maybe that's why they last long on a small battery. Nintendo basically advise you to play it in the the middle of the no where to avoid interference.

I don't remember the PS4, PS3, Xbox 360, WiiU, or Xbox One controllers having widespread controller connectivity issues at launch.

Nintendo advises that people don’t put the Switch behind a TV, near an aquarium or “within three to four feet of another wireless device, such as a wireless speaker or a wireless access point.” Doing so can disrupt the signal the console sends to its detachable Joy-Con controllers.
Click to expand...

Ahh the things people do for Nintendo systems:

By 1pm my Switch and Zelda still hadn't showed shipped from Amazon. I got on customer service chat and talked to someone about it. They wouldn't let me cancel it or change the shipping address as it was shipping and they guaranteed me that it would get to the delivery address that I had on the order which was my working address today. Well my work closes at 4pm so I'm sitting outside my work, drinking beer, waiting for my Switch to arrive. I already have Bomberman and the Pro controller, just no Switch or Zelda.
F

I'm having the controller issue. I sit about 10-12 ft back from my 65" TV. The left controller constantly loses a connection. Zelda doesn't look that good on the TV tbh, but the game is amazing. I don't know where the last hour and half went. It's sucking me in...I don't have the pro controller, but the stock setup is fine for me. I just hope they fix the connection issue.

The device is so tiny. I've already applied too much pressure to the stand and popped it out. Seems like it won't break, just pops out. Cool design.

On a side note my colored joycons glow when my reef tank light is in the actinic night stage. 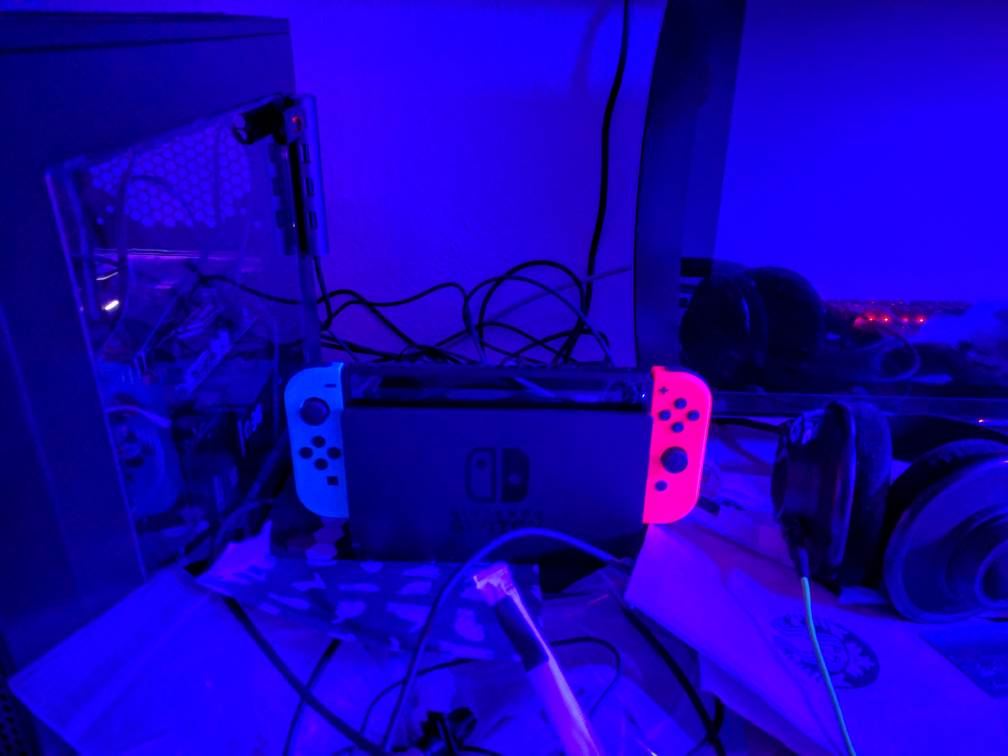 people getting the grey or mixed? seems a lot of grey in stock around here and a limited number of mismatched.