On Android, I use WiFi Analyzer for a quick graphical representation of the channel setup of the various local WiFi access points. 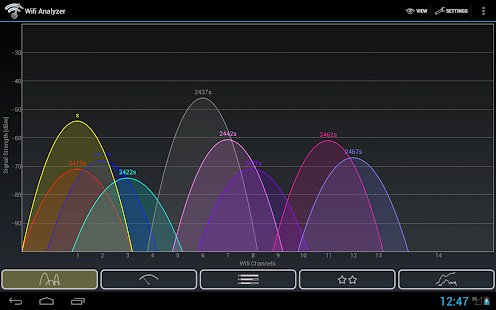 What's the equivalent on iOS?

I've downloaded a few iOS apps, and they either give real-world signal graphs that are irritating to read, or else give text representations. I have not tried any paid iOS apps though.

Any iOS app give the same simplified graphical output that WiFi Analyzer does?

I'm trying to do determine if I should use Automatic WiFi channel selection or else fixed channels. My neighbour uses fixed channels, although my System Information application tells me it's channel 1,+1 802.11n. I'm not sure if that means Channel 1 plus 2.4 GHz channel bonding or just channel 1. My own access points don't get seen with the "+1".
Last edited: Oct 30, 2014

I LOVE LOVE LOVE LOVE that app. If nothing else when you show it to other people it makes you LOOK like you really know what you are talking about.
N

There won't be anything in the app store that does that since the info is not available via the API. Might be something if you jailbreak, but idk.

nickbits said:
There won't be anything in the app store that does that since the info is not available via the API. Might be something if you jailbreak, but idk.
Click to expand...

Come to think of it, the "text representations" I was talking about was on Mac OS X, not iOS. The iOS apps (besides the real time data) give IP addresses and what not.

What about a WiFi Analyzer type app on Mac OS X? I hate sifting through the text data.

poofyhairguy said:
I LOVE LOVE LOVE LOVE that app. If nothing else when you show it to other people it makes you LOOK like you really know what you are talking about.
Click to expand...

Fing is pretty amazing as well if not as impressive visually. It gives you a ridiculous amount of information about a network and all the connected clients.

WelshBloke said:
Fing is pretty amazing as well if not as impressive visually. It gives you a ridiculous amount of information about a network and all the connected clients.
Click to expand...

Fing I have already. It's very nice, but it doesn't give that channel + dB graph.

Eug said:
Fing I have already. It's very nice, but it doesn't give that channel + dB graph.
Click to expand...

Yeah, Fings more for networks that you're connected to rather than scanning the network environment.

They give some serious information between then. Its interesting firing up fing when connected to the work public wifi.

There actually was a WiFi Analyzer for iOS 5 and 6 with jailbreak but was removed from the App Store.

WiFi Analyzer and other wifi scanner apps for the iPhone were removed from the App Store in March, 2010 due to the use of private frameworks. Private frameworks are libraries that cannot be used by third-party developers, as clearly stated in Apple's Developer Agreement. Unfortunately, some system resources can only be accessed using these frameworks, and the wifi card in the iPhone is one of them. To make things worse, starting in iOS 5, apps cannot access the wifi card even when using the private framework, so users who had the app installed and upgrade to iOS 5 will not longer be able to run the app. Well, the app will run but it will do nothing.

There are many reasons why these frameworks are kept private. One of them is to ensure that apps do not negatively affect the user experience, for example, by draining the battery. Other reason is to give Apple the freedom to change different aspects of the library until it reaches maturity so that it can be used by developers in a safe manner. With no access to these private frameworks for wifi scanning and with the restrictions of the sandbox environment in newer versions of iOS, the only option is to install and run the app in a "jailbreak" device.

WiFi Analyzer is available in the Cydia Store, but keep in mind that it only supports the 2.4 GHz band and has limited support for 802.11n networks. Also, it has not been tested in iOS 6 or higher. The app seems to work fine in iOS 5 and 6 with jailbreak.

UPDATE: I've released a completely new version for iOS 7 called WiFi Explorer. This new version supports 2.4 GHz as well as 5 GHz networks, offers nicer graphs and more network details. Keep in mind that a jailbreak is still required and the app can only be found on Cydia. See official description here.
Click to expand...

Oh man. I came across your post via Google because searching for the same thing. Wifi Analyzer is so good. I just switched to iOS and I wrongly assumed there would be something similar, but I haven't found it yet.

I work in TV and am in a different arena every week. Part of what i do relies on very reliable wifi because I set up a small mesh network, and the first thing I do in an arena is open that app and check for channel interference.

For the time being, I guess I will just bring my old android phone to the arena and use the app.
M

Exactly...I was trying to help my sister with coverage problems at her house, but she has an iphone. I run wifi analyzer and speedtest on my android. Very easy to set up and diagnose networks.
You must log in or register to reply here.
Share:
Facebook Twitter Reddit Tumblr WhatsApp Email Link