When did you start computer gaming?

Adventure and Hunt the Wumpus on a Kaypro II. Then I wrote a few games for it (a Breakout clone, a tic tac toe game, and a tank /mine field game). With text mode only, gaming was a bit limited. I did learn the cursor movement CHR()s by heart.

Early 80s. Coleco and Atari. Most fun was hacking games on my friends Mac in the mid 80’s.


This was my favorite back then. It's not shocking that I'm a Trials fanboy

shortylickens said:
Oh, the first thing I remember playing games on was one of those things with the tiny blue & white screen and the keyboard that attached to the front.
School had Apple II's, first in green, then in full color. We did Number Munchers and Odell Lake and Oregon Trail.
At home our first computer was an Empac Word Processor that could also handle text based games. I distinctly recall one called airport controller that had planes (usually X's) running all over the place and you had to direct them away from each other. One crash was instant lose.
I still remember the first time we got a sound card and could finally hear Wolfenstein 3D. It was glorious.
When I played Doom I was finished with consoles and didnt miss them.

The reason I asked and started a poll is I was curious about how many people remember what it was like to work on your computer all day just to get it functioning and playing one lousy game, and how much progress we've made since then.
Click to expand...

I remember some of the C64 games, we could start loading one, go down and eat dinner, and when we came back upstairs it was almost ready to play...
Reactions: shortylickens

shortylickens said:
Oh, the first thing I remember playing games on was one of those things with the tiny blue & white screen and the keyboard that attached to the front.
Click to expand...

Vic 20 in 1982ish. Before then we had Super Pong in 77ish, around that same time a Teacher in Jr High had a TRS80 that he started an Elective Class for Computer Programming with. That fascinated me so much it felt like playing a Game, unfortunately we Moved 6 weeks into that School Year and it wasn't until I got the Vic20 that I ever touched a Computer again.

I guess the earliest computer game I played was at the local university's engineering expo in ~1973. They had a computer set up to play tic tac toe with a ten key and a pen plotter as input and output. The plotter was really cool as the paper was fixed and the pen was moved over the paper by a spider-like contraption. The player got to leave with a print out of the game (cool stuff for a little kid).

Count me as another TI-99/4A user. Used to play a Scott Adams text-based adventure game…not sure of the title. I think it might have been "Pirate's Cove." You can play it on ifiction.org as well as other games.

KeithP said:
Count me as another TI-99/4A user. Used to play a Scott Adams text-based adventure game…not sure of the title. I think it might have been "Pirate's Cove." You can play it on ifiction.org as well as other games.

1984-85, Freshman year in college, playing a D&D style ASCII game on the college mainframe, can't remember what the name was. When your character died, they were dead, that's it. So you printed a tombstone out on the green striped dot matrix and created another one. I probably had a 1/2 doz tombstones stuck on my dorm wall at any given time for my highest level ones.

I played Oregon Trail on a TSR-80 in the late 1970s. At least I think it was called Oregon Trail. There was also some snake game where you ate dots and got bigger and you died when you ran into yourself. That was at my local middle school. I was even in the local newspaper for doing it....there was a "computer showcase openhouse" type event. It was after school. I stayed and played games and a local news crew came by and snapped my picture and took my name. I was 9. I was famous. For a few minutes.

a few years later (early 80's) my dad won a Radio Shack Color Computer in a hotel drawing. He gave it to me and I promptly taught myself BASIC. Then started typing in code for very basic BASIC games. I remember I could only hook up to the tv on Saturday nights after Saturday Night Live was over and my parents went to bed. Next year, Santa Claus brought me my own tiny color tv.....and I could pound out code as much as I could stand it.

I remember one game was an astronaut game that involved inertia...you had to navigate an obstacle course and not run into anything.

so many 1980s... we're all old.
Reactions: GodisanAtheist

Not counting school stuff (early Oregon trail, whatever else was on those apple 2's), and not counting stuff I barely remember (some superman game on maybe a commodore?), my first forays were myst, doom, duke 3d, terminal velocity, privateer, diablo 1, and warcraft 1.

My first was Lemonade Stand & The Bards Tale on my Apple II+. Had to take the bus to NYC to get it, but it was so worth it. The late 70's were good times.

uallas5 said:
1984-85, Freshman year in college, playing a D&D style ASCII game on the college mainframe, can't remember what the name was.
Click to expand...

Muadib said:
My first was Lemonade Stand & The Bards Tale on my Apple II+. Had to take the bus to NYC to get it, but it was so worth it. The late 70's were good times.
Click to expand...

Definitely spent my share of time on those games. Wizardry as well. I remember my mom had played Wizardry a bit, and you could import characters from Wizardry to Bard's Tale, but the character disc had gotten damaged, so it would only read one character, and it ended up importing as a wildly powerful archmage.

nakedfrog said:
Definitely spent my share of time on those games. Wizardry as well. I remember my mom had played Wizardry a bit, and you could import characters from Wizardry to Bard's Tale, but the character disc had gotten damaged, so it would only read one character, and it ended up importing as a wildly powerful archmage.
Click to expand...

I forgot about Wizardry! Mine's broke early on, so I didn't get to play it really.

I was 1st introduced to PC games in the 1980s. My cousin had a PC and showed me various games; GI Joe, Maniac Mansion and a few other games. I wasn't impressed. Up until then, I was use to arcade games. And, none of these games looked anywhere near as arcade games did - they also looked complicated in controls and what not.

I pretty much wrote PC gaming off.

From then, it was Atari, Nintendo and Super Nintendo.

My high school got a 'fleet' of Compaq Persarios in 1995. We used them to learn programming in QBasic. 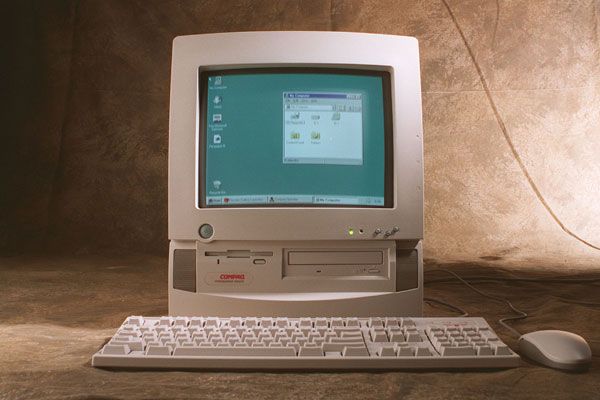 I decided to buy a Compaq Persario (not the one pictured above). It was a tower, 100Mhz, 16MBs system memory, 1GB HDD, CD drive. It was HUGE. I upgraded it by slapping on a VooDoo 3D video card. The one that worked with your current card to handle 3D graphics. Also upped the processor (to 166, I think) and system memory (a WHOPPING 80MBs!).

Anyway, the jump in graphics and performance was insane. I remember being floored when I played Quake 2 on my recently frankenstien-esque system. The VooDoo 3D card really made things look great (for the time). I remember playing Resident Evil on the PC and seeing these higher rez 3D figures on top of muddy / pixelated garbage.

Most of the PC games when I 1st got into PC gaming were only for the PC (Diablo 1 was on the PS1). So, you couldn't get anything like them anywhere other than the PC.

Some console games that made it to the PC were cool as well; Metal Gear for example. I loved it on the PC, as I was able to get a higher / crisper resolution.

At some point, I went straight Mac and only played World of Warcraft.

Eventually, I circled back to PCs and got to the point where everything, except Playstation 1st party games & Nintendo games, are on the PC.

Thing is I'm young enough that I don't really remember when I first started PC gaming, I was probably 6-7 years old in the early 90's when my dad picked up one of those PC's that needed a big floppy to boot and another floppy drive to actually run a program.

Played a lot of Math Blaster on a monochrome display back then. After some new PC purchases and DOS6.0 showed up, I think I fired up one of those old Commander Keen/Wolfenstein 3d, and eventually Doom. That was it.

My first PC besides the family PC was around the time I got into college in the early 2000's, a powerspec from Microcenter, and I slowly upgraded bits and pieces of the thing until it was gaming worthy.

Played first PC game in the late 1990's. Myst got me into gaming. First gaming pc bought on ebay from a guy who built them himself. Great computer. After, my husband learned to build our PC's and been playing ever since/

Early 1990's for me. The first big games that I played were A10 Tank Killer, Sim City, XCom, and Civilization.

I believe that I played all of those on an IBM PS/2 Model 50Z, with a 286 processor, a whopping 8 MB of RAM, and a 30 MB hard drive!
You must log in or register to reply here.
Share:
Facebook Twitter Reddit Tumblr WhatsApp Email Link