zzuupp said:
Oh POOP! I had my days mixed up.

Apparently it's a "thing" the last few weeks to be either a day early OR a day late.

EDIT:
Thursday last week.......
Me: See you Monday, have a good weekend!!
Boss: Where you going tomorrow? It doesn't show you off on the schedule.
Me: Why do you want me to come in tomorrow? A Saturday, OT, no parts and nothing else to do. Is something coming in?
Boss: Umm tomorrow is Friday............and your parts will be here early AM.
Me: Ummmm.....well then, Have a good night see you tomorrow!!!
Last edited: Dec 13, 2018
Reactions: zzuupp

It's hard to remember what time of day to post stats, so I'm going to be fairly random, I think.

Ken g6 said:
It's hard to remember what time of day to post stats, so I'm going to be fairly random, I think.

I didn't make day 2 stats, but I now have 1 finished, 2 on the way.
78K seconds on the red card. The older green cards are going to take much longer.
S

Looking at other forums, it occurs to me that many of our competitors are bound to increase their productivity for several reasons:
I am running only GPUs myself, and not all of them, but am still putting almost 2 kW into this. Nevertheless this may not be sufficient to remain in the top 20, with ~7½ days still to go.

AMD Users had some kind of downtime: 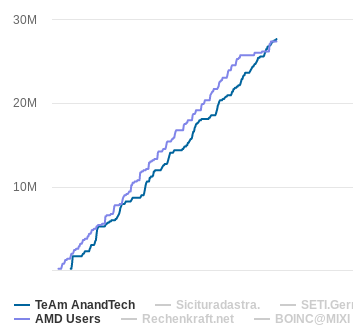 StefanR5R said:
AMD Users had some kind of downtime:

I believe you should have placed that in a "Spoiler"
S

Howdy2u2 said:
Has anyone ran the CPU side of GFN21s?
Click to expand...

StefanR5R said:
PG's own challenge thread has some reports on GFN-21 on CPUs.
Especially message 123194 by mackerel and message 123219 by Yves Gallot.
Click to expand...

Desktop CPUs have less cache than needed to fit a single task, and should run at most one cpuGFN21 task at once.​
Desktop CPUs with dual channel memory and Skylake based cores scale only up to 4 threads for a cpuGFN21 task.​
The aforementioned i9-7980XE has 24.75 MB shared L3 cache (non-inclusive, together with 1 MB L2 cache for each of the 18 cores). Evidently this cache setup supports cpuGFN21's demands pretty well.

1 task per processor, 14 threads per task:​
10.1 h estimated run time per task after 10 % completion​
These processors have 135 TDP, but again, since the particular motherboard drives them at their all-core avx turbo clock instead of base clock, actual sustained power consumption possibly exceeds TDP.

StefanR5R said:
AMD Users had some kind of downtime:
Click to expand...

I believe you should have placed that in a "Spoiler"
Click to expand...

Well, here is another post with a lack of spoiler tags:
Seeing how we caught up with AMD Users, I now added 2 more GPUs (to the detriment of F@H, sadly) and 5 of those nice Xeons (somewhat reducing my WCG output, and stopping my activity at some other projects).
S

Not that I plan on completing a lot on my gtx 1050ti, but it looks like the first wu I started 3hrs after the start of the race wasn't counted. No cpu tasks for me.
S

Where does one look to see current overall standings for 2018? The link on PG takes you off-site for 2018 (and you can only select 2016 results and older).

StefanR5R said:
Well, here is another post with a lack of spoiler tags:
Seeing how we caught up with AMD Users, I now added 2 more GPUs (to the detriment of F@H, sadly) and 5 of those nice Xeons (somewhat reducing my WCG output, and stopping my activity at some other projects).
Click to expand...

Well, not necessarily a spoiler. I guess the move means AMD is in the crosshairs.

I had a panic attack when I read this post from Michael Goetz "46% came back with some kind of an error" , but my ancient AMD cards have no errors or invalids to date, and they even have a 45% 1st! rate.

I sure hope all those errors are the nearly instant type, and not the kind that run for hours upon hours and then gives the error. EDIT: They are mostly instant for the GPU, likely caused by Windows10 over-riding existing drivers which remove OpenCL support and the user not yet noticing the change. And the CPU errors were 75% aborted tasks. So that is good to know the tasks aren't at fault.

Competing against "AMD Users" may remain a pointless pursuit. During the past 3 hours, their relevant contributor busied himself adding a whole bunch of new Tesla V100-SXM2 virtual machines at Amazon Web Services.

Though I suspect this is merely a reaction to failing to be top individual user. User #1 on the other hand, who is another user of virtualized V100-SXM2 and P100 servers (at Google Cloud Platform) along with CPU-only servers (perhaps cloud VMs too), may quite possibly even be unaware of this challenge.

Well, at least for the moment, we're ahead of AMD.
Reactions: zzuupp, Howdy, TennesseeTony and 2 others

Thanks for the stats Ken.

Thanks for the stats, Ken!

StefanR5R said:
..... User #1 on the other hand, who is another user of virtualized V100-SXM2 and P100 servers (at Google Cloud Platform) along with CPU-only servers (perhaps cloud VMs too), may quite possibly even be unaware of this challenge.
Click to expand...

I was thinking someone should reach out to this new-ish user, who has no team, and offer him a TeAm.....
S

Doh! Looks like I'll probably only be good for 4 wu during this race

StefanR5R said:
Competing against "AMD Users" may remain a pointless pursuit. During the past 3 hours, their relevant contributor busied himself adding a whole bunch of new Tesla V100-SXM2 virtual machines at Amazon Web Services.
Click to expand...

He continued to do so and has created ~100 instances with 1 task in progress each since yesterday. He hasn't uploaded any of those yet, even though most of them should be complete by now. In addition, he has ~150 previously created V100-SXM2 instances, each of them with 1 task in progress as well. So, his bunker is approaching ~40 M credits now if these cloud instances are still in his control.
Last edited: Dec 16, 2018

@TennesseeTony seems to have disappeared.

Howdy do that? (It took me about 10 minutes to figure it out!)
Looks like we have to watch out for a (w)reched craft behind us.
Reactions: zzuupp, TennesseeTony, Howdy and 1 other person

Well it certainly took me by surprise!!! Scrolling down and seeing where everyone is and there's another me!!! That should scare the hell out of anyone!!!

Thanks for the stats Ken!!
S

It's rare for the organizers to comment on the scoreboard.

Michael Goetz said:
On the leaderboards, there's been quite the battle raging between the #1 and #2 team positions as well as the #3 and #4 team positions. They keep flipping back and forth. With tasks worth 150K points each, a million point lead can vanish in a heartbeat.

On the individual side, Ryan Propper has a decent lead in first, but #2, #3, and #4 are very close together.

With half the challenge to go, and with server-class Tesla V100-SXM2 GPUs available to rent that can run circles around an RTX 2080 Ti, completing GFN-21 tasks in only 3 hours and 20 minutes, nothing is close to being decided yet.
Click to expand...

Here is a comparison between AWS EC2 prices (regular rates, not spot prices) vs. operational cost in a German household (i.e. with higher electricity costs than in many other countries):
So, outside of using some leftover cloud computing hours from a moneymaking project, or using certain gratis offers on much slower VMs, I don't see cloud computing to be attractive to a regular Distributed Computing hobbyist. Am I missing something, or does one really have to be really desperately wanting to win a DC challenge to go and rent cloud computers for it?
Reactions: emoga, Ken g6 and Howdy

@StefanR5R,
I am glad you did the calculations for this (well I was hoping you would anyway) I looked this up myself and not knowing exactly how to calculate it, came up with the same question...........WHY? The only reason I could think of was finding a GFN21.....which would be a world record? Then again, why only during a challenge if that was so important?
You must log in or register to reply here.
Share:
Facebook Twitter Reddit Tumblr WhatsApp Email Link