Surprised there's no post on this. Does anybody have any major problems with the issues he raised and what he plans to do? If so, state your case.

I thought it was a great presentation. Damn, we have a lot of shit to fix.
Reactions: Muse
E

His speech was good and I thought it was inclusive and very bipartisan unlike Tim Scott’s speech which was very disappointing. I kept hearing how Scott was genuine in working with Dems or trying to do bipartisan legislation, but his speech was the same old gop garbage, lies and divisiveness. All he offered up were more culture war type Shit.
Reactions: Linux23, soundforbjt and Lanyap

You know what was refreshing? Seeing 0 politics on Facebook when there was a president public speaking.

I was hoping he would send US Marshals to arrest state house members voting for voter suppression in their home states. Nazis have no place in our government. Ship them to Guantanamo and let them vote their way out using ballot boxes in 100 feet of shark infested waters.
Reactions: JEDIYoda, hal2kilo and zinfamous

The speech was on because my wife turned it on. I said what the hell and grabbed a beer, or two, and watched. I believe he did a pretty good job. He only made a few minor stutters that he plowed through. I was imaging any conservatives watching pointing at their tv's and saying "see he's demented!". As far as content I was happy with the way he presented his ideas, and I was very happy he called out the 2017 tax cuts which did absolutely nothing. If you're asking how we are going to pay for pre-k child education, just ask where that tax cut money came from imho. Ted Cruz nodding off was funny.
Reactions: Jaskalas and Muse

Lanyap said:
Surprised there's no post on this. Does anybody have any major problems with the issues he raised and what he plans to do? If so, state your case.

I thought it was a great presentation. Damn, we have a lot of shit to fix.
Click to expand...

I think the right is shitting their pants now after Joe said "no amendment is sacrosanct" or whatever it was he said.

I like how the people who back an insurrection and Trump's Big Lie, the people who think a white nationalist caucus is a good idea... have the gall to say Joe Biden is pulling us farther apart. The democracy haters who support treason want the rest of us to get with the unity guys, jeeeeez.

My god you people are pathetic. A presidential speech that isn't a hatemongering meandering diatribe of greivances and conspiracy theory bullshit, and just look at the butthurt and whining.
Reactions: zinfamous and hal2kilo

I watched about 10 seconds of Tim Scott's rebuttal.

He began (this is probably literal): Joe Biden seems to be a good person...

I turned off my TV then and there and muttered something about "seems, I know not seems," which I think is Shakespeare, maybe Hamlet (fact check: Hamlet: "Seems," madam? Nay, it is; I know not "seems." ). He had the face of self serving prevarication, I wasn't going to subject myself to any more.

I watched NBC's parsing, but wouldn't stand for Scott.

I was happy enough with Joe. He laid it out, gave the details, it was substantive, something the last guy in the White House couldn't do to save his soul. And he manages to project real emotion especially at the end. We know he's not the most gifted orator, but he gets at least an A- on the address. I hope he can bully his agenda past the Republican stonewalls!!!
Last edited: Apr 29, 2021
Reactions: JEDIYoda

I heard it could have been summed up in an email.

That that wouldn't have been the whole story.

McCarthy always delivers elaborate detailed comments. (Minority Leader says)
Basically, the leader of the opposition, has nothing negative to say about it. With says everything you need to know.
Last edited: Apr 29, 2021

I was glad to see he's no Uncle Tom. Said so himself. And it really isn't fair that Democrats are trying to divide the nation by making Conservatives aware of or feel guilty and isolated about what shits they have become by modeling constructive government in front of their poor delicate and sensitive eyes. It's just not right to make bums feel out of place at a Hilton dinner or have the sewer spill over and flood the houses of congress.

The GOP’s Black Friend Says America Is Not a Racist Country – Mother Jones
Click to expand...

"Scott’s speech may have been chock full of GOP talking points, but there was an old favorite that wasn’t explicitly deployed but was obviously implied. In the aftermath of the Trump presidency, the coronavirus pandemic, and the racial justice protests that exploded across the country after the murder of George Floyd, America embarked on a fragile but badly needed racial reckoning. White conservatives needed someone to tell them that they weren’t racists resisting a changing world, but rather the progress on racial equality was something that was being inflicted on them. The GOP needed a Black friend. By laundering and displaying the party’s tired talking points, Sen. Scott served as just that. His speech gave white conservatives cover. After all, we all know that it’s impossible to be racist if you happen to have a Black friend. "

Just so I understand. Republicans sent out the black one to tell people the party that...

Tried to start a White Nationalist caucus
Said they are comfortable with white insurrectionists but not with black ones
Who's leader called African countries, shithole
Who's leader retweeted groups chanting "white power"

Really??? And you wonder why Uncle Tom is being bandied about.
Reactions: soundforbjt, zinfamous, [DHT]Osiris and 2 others

the ironic thing about Tim Scott, he has admitted in the past that there is systemic racism, he and people he knows have experienced it themselves in regards to policing. Tim Scott is just another morally bankrupt GQP'er sucking the teat of racist white Trumpy America because without them, he would never win office again. Four years ago he was talking about 'cracks in the very foundation of this country' - it's like he never made that speech. He is the very definition of an Uncle Tom. These people are just horrific. 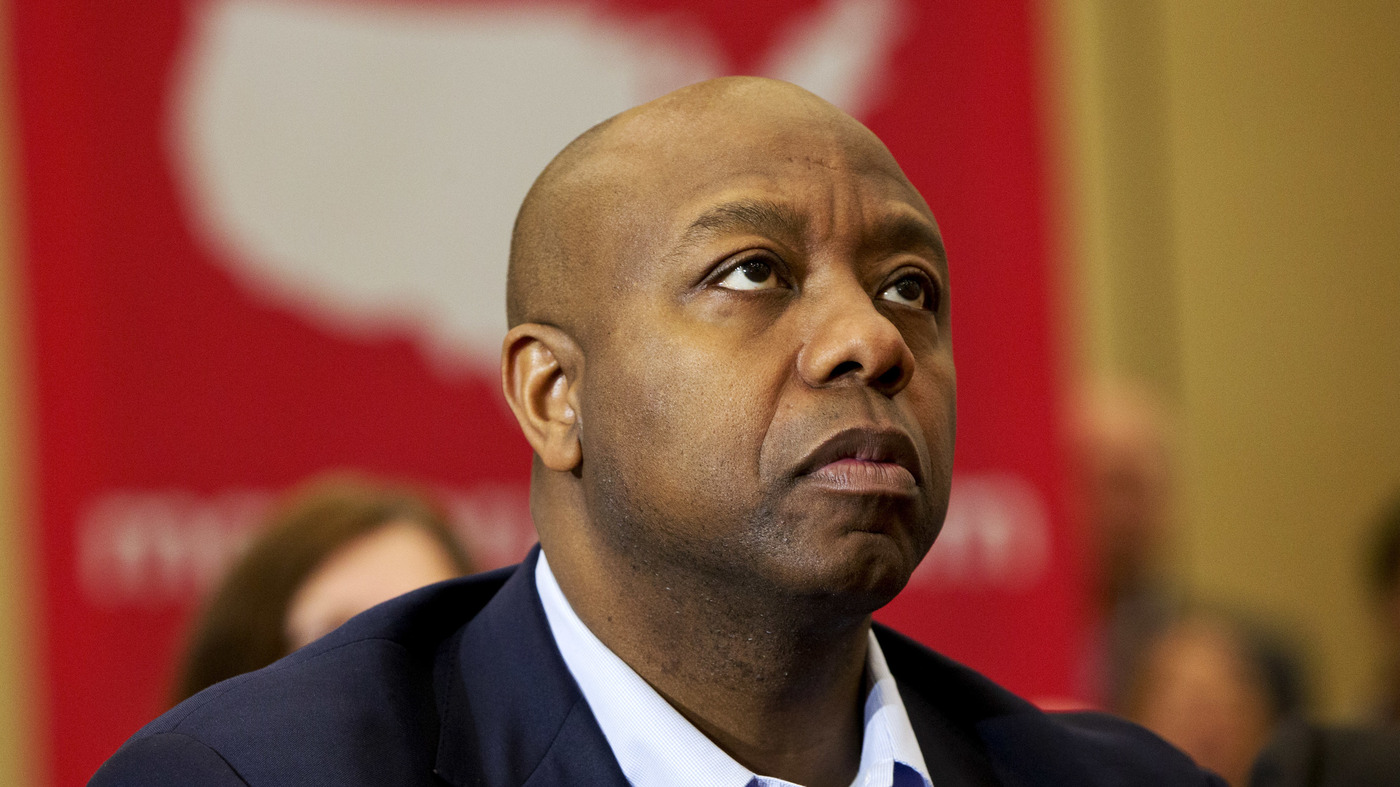 "There is absolutely nothing more frustrating, more damaging to your soul than when you know you're following the rules and being treated like you are not," said U.S. Sen. Tim Scott of South Carolina.

"While many law enforcement officers do good, he said, some do not. "I've experienced it myself."

Scott revealed that he has been stopped seven times in the course of one year as an elected official. "Was I speeding sometimes? Sure. But the vast majority of the time I was pulled over for driving a new car in the wrong neighborhood or something else just as trivial.

He described several encounters with police, including one where he was stopped because the officer suspected his car was stolen. He described a similar incident that happened to his brother, a command sergeant major in the U.S. Army. And he told the story of a staffer who was "pulled over so many times here in D.C. for absolutely no reason other than driving a nice car." The staffer eventually traded in his Chrysler for a "more obscure form of transportation" because "he was tired of being targeted."

He asked his Senate colleagues to "imagine the frustration, the irritation, the sense of a loss of dignity that accompanies each of those stops."

Scott also described walking into an office building on Capitol Hill and having an officer ask him to show his ID even though he wore a Senate pin.

While he is thankful he has not faced bodily harm, he said, "there is absolutely nothing more frustrating, more damaging to your soul than when you know you're following the rules and being treated like you are not."

"We must find a way to fill these cracks in the very foundation of our country," he said.

The senator ended with a plea to his colleagues to "recognize that just because you do not feel the pain, the anguish of another, does not mean it does not exist.""
Reactions: Meghan54 and Muse

That sums up way to many conference calls I get invited too.

Lanyap said:
I thought it was a great presentation. Damn, we have a lot of shit to fix.
Click to expand...

I thought about this when I realized that John Oliver is able to come up with a new thing almost every show (he has revisited topics a few times) to talk about, and the vast majority of them are about issues that affect us.

pauldun170 said:
That sums up way to many conference calls I get invited too.
Click to expand...

I used to just surf through the long ones, waiting for my piece. Those days are over thank you.

The GOP’s Black Friend Says America Is Not a Racist Country – Mother Jones
Click to expand...

I guess that makes her complicit, doesn't it.
Reactions: pcgeek11
J

I think that's true in a general sense, even if some people & places are racier than others. In the days since my childhood, change has been uneven in a lot of ways. Racism persists at many levels in our society. Every racist asshole in America stood up on their hind legs & howled at the moon when Trump was elected.
Reactions: Lanyap
You must log in or register to reply here.
Share:
Facebook Twitter Reddit Tumblr WhatsApp Email Link