So I just replayed Return to Castle Wolfenstein which is one of my favorite games ever. In particular the weapons arsenal is one of the finest collections ever presented in a game.

The atmosphere and level design holds up really well to this day as well; I always liked the mix of supernatural, sci-fi and WW2 action the game provided. My only gripe is that consoles got an extra episode in North Africa which the PC didn’t. 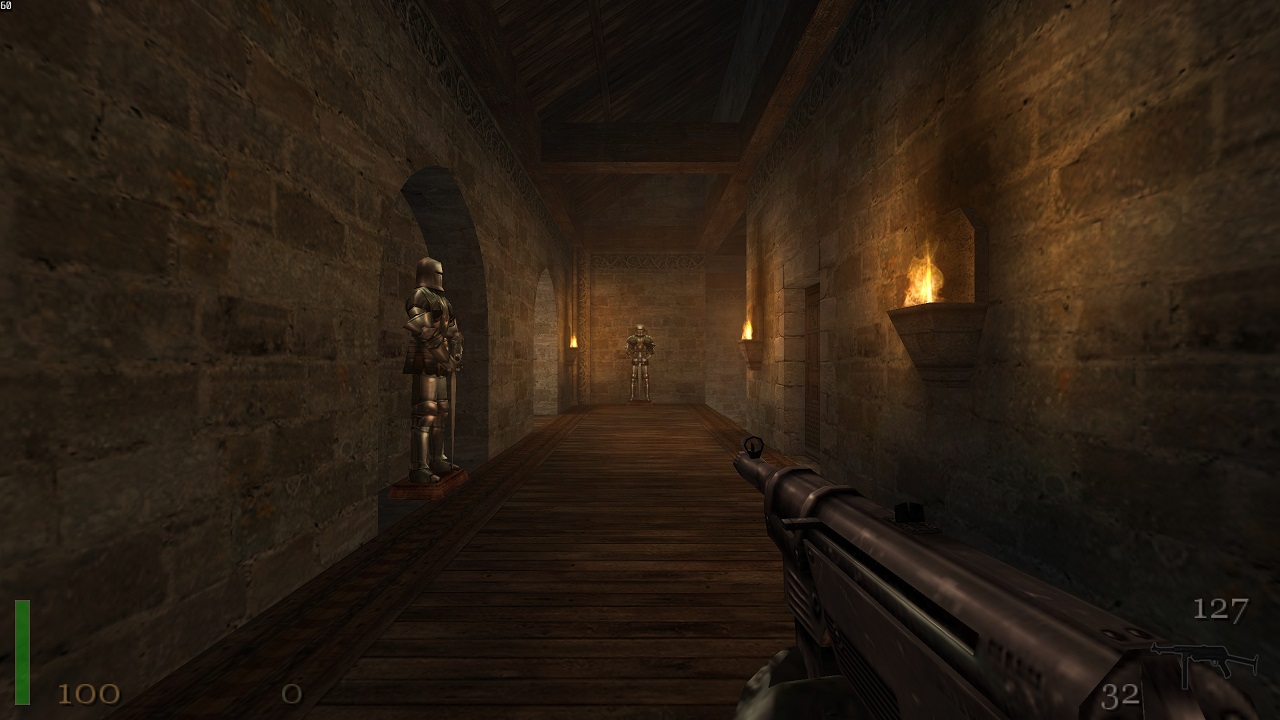 I also remember playing the original Wolf3D in DOS and being impressed by doors that open sideways and digitized enemy speech.

Wolfenstein 2009 (the forgotten one) was OK but I didn’t find the guns to be all that compelling to use. Also the respawning enemies in the semi-sandbox levels disrupted level flow a bit.

I haven't really looked at the newer games yet.

I've only played 3D and RTCW, but RTCW is one of my all time favorite games. Great atmosphere, and I like the European architecture. I've actually been thinking about it lately, and want to try to get it going on debian. There were a lot of great sp mods for it also. I think I lost all the ones I collected. I wonder if they're still archived anywhere?

I do remember seeing (very briefly) Wolf3D at some Radioshack-style store in a mall. Not sure if it was a demonstration (non-playable) or if it could be played, that memory is too blurry. That would have been... gosh... not sure, probably around 1992 (not sure when during the year though). All I do know for sure is that I did see it before I saw DOOM. However, some time later - after I finally saw DOOM - at another store (movies and games rental one) I saw it again and people could play it. I didn't play it myself, but one day I got to that store with my cousin since we wanted to rent some games on the SNES or Genesis, and Wolf3D was playable on a pretty small computer (probably something like a 486, not certain though).

However, even though I saw it during its early times, I wasn't really impressed that much by it for some reason. I don't have any recollection of having any sort of "WOW!" reaction to Wolf3D. I do remember thinking something like "Oh nice" probably because of the simple fact that it was a neat-looking Non-Console game at the time. I didn't know exactly what it even was (sure, I saw the shooting and the enemies but I didn't know what the game even was about). I was completely blown away by DOOM, but Wolf3D was more of a 'nice' thing than a game I was absolutely envious for (to own a PC, and so on) or obsessed about. I saw it, was alright, moved on and that was it.

Now, fast forward all the way to New Order. That game was released in 2014 from what I just checked. But I played it around 2016 if I remember, or perhaps it was 2017. Between Wolf3D and New Order I never payed much attention to the series. But New Order got rave reviews for a long time and people talked about it a lot around its release. I did keep an eye for it around that time when it was new, but I probably lost interest for whatever reasons would have been at the time (work, or anything else). But yeah, in maybe 2016 or '17 I checked for something new to play and New Order was on sale, I think. I had no idea what to expect, but it was amazing. I really, really liked it. One of the best FPS games I played in modern years since maybe something like Half-Life 2, along with Borderlands 2, Painkiller, Prey (original one) and so on. Just a few select out there in recent years that I can say were truly great FPSes.

I know there's a sequel to New Order, but it's been sitting on my Steam Wish List for a few years I think. Never got the opportunity to even buy it yet, just have a lot of things to do and a LOT of other games to play or to care for (backlog is enormous, I would have a year or two worth of games to go through if I even wanted to do half of them).

So yeah, just played 2 games in the franchise. Oh and, well yeah I did eventually play Wolfenstein 3D but honestly I don't quite remember which version of the game it would have been. I THINK it was the SNES version. And I don't remember completing it (at the time it would have been just a rental though). Then fast forward to New Order, there's a section where the main character dreams (if I recall correctly) and we get transported in the dream, and it's Wolfenstein 3D lol, so I got to play it again under that situation.

That's my story with the Wolfenstein franchise. I did really enjoy New Order so... I'll 'keep an eye' for the sequel eventually, I'll play it. But it could still take years from now. I don't feel any rush to play it so that's why it's in the backlog. Actually further back than even my backlog since I didn't even buy it yet.

The reboot series is absolutely top tier. Not only do you kill Nazis, but you learn why you're killing Nazis and even sympathize with the people that have been brainwashed into becoming Nazis. the games are way more cerebral than they have any right to be.

I had a tough time with RTCW. It just wasn't fun. Hit scan enemies meant levels of tripping an alarm or alerting enemies, then waiting for them to all run into a door single file to get gunned down. Just felt extremely dated from a gameplay perspective.

RTCW had excellent Multiplayer at the time.

Wolf3D was the first FPS I played, it was revolutionary.

I haven't played any of the newer batch, but at least some of them are on my list.
We had only just gotten a PC around the time Wolf3d came out, after having just an Apple IIc for my childhood up until then (and having tried to play Wolfenstein on that, we didn't do well, not understanding the mechanics of the game). I first saw Wolf3d running on a 386 at my high school, and taking it home and running it on our 486 was my first exposure to the difference of performance, I asked my friend why it was so much better on my home PC, and thus began my descent...

I played oodles and oodles of Wolfenstein: Enemy Territory. For LAN parties, I had it running as a dedicated server on my Asus Eee PC, since Jaymod didn't function fully unless it was running in dedicated server mode.
You must log in or register to reply here.
Share:
Facebook Twitter Reddit Tumblr WhatsApp Email Link