I loved Hostiles. 9/10 for me.
Reactions: Homerboy

Ichinisan said:
I never liked Power Rangers even a little. I was the target age group when it came out, but I absolutely hated it and hated that my friends liked it.
Click to expand...

Hah me too! It was so cheesy.

I just watched the 2017 movie. I actually enjoyed it! I'd give it an 7/10 because it was actually entertaining. I had low expectations & it turned out to be a LOT better than I thought it was going to be. It's a fun popcorn flick - fun for a single watch, just relax & enjoy it for being a silly action(ish) movie. It could have been better in a million ways, but the target audience was really like 8-year-olds, with how they did the writing & whatnot (ex. the "crazy" girl - why is she crazy? but if you're a kid, you're just like oh, well there you go, she's the crazy girl!). I would watch a second one if they made it - kind of feels like the first couple seasons of Scrubs, they still need to get into their groove, but there was definitely potential.

I wasn't a fan of Rita, but I think if they had aimed the writing at our age group instead of kids, it could have been miles better, to allow for more depth (watch Bootleg Universe if you haven't seen it already). Parts of it reminded me of Firefly's backstory with Mal & the war - they had kind of a cool war thing going on & a good backstory with the crystal & all that, and Zordon's integration into the ship was pretty cool CGI-wise. I liked the gold stuff that Rita was doing, that made for some cool effects. The Krispy Kreme product placement was hilarious, a prime example of how to use product advertising in a film without making it stand out in a stupid way.

Overall, fun & worth a watch if you're just looking for something neat to fill the time. Just keep your expectations in line with the fact that it IS a Power Rangers movie, and that it was written for kids, not adults.

The only power rangers movie I think I could have watched was that youtube R rated short that came out a few years ago.

So for those unaware, YouTube Red has launched a new Karate Kid series called "Cobra Kai" It stars Macchio and Zabka reprising their roles from the 80s classic. Basically this takes place 30 years or so later and we see that Daniel has built on his success and Johnny... well Johnny has slipped some and isn't doing so well since his demise from the Crane Kick (and losing Elizabeth Shue).

The show seems quite aware of how corney it is but not to the extreme. While the story line itself isn't anything new (Spoiler: there's training of a young protégé!) they do a pretty good job of mixing things up and making you a little confused exactly who is the bad guy here and who you should or shouldn't be cheering for...

Zabka's character is awesome. Just a dude stuck in the 80s clinging desperately to his glory, hating and totally confused by today's PC culture and youth. There's some funny jokes written in there.

+.5 stars for Buckaroo Banzai reference.
It's the 1st movie I remember seeing that wasn't with my parents

Kick ass, great special effects. But overall a depressing movie. They really went out of their way to make all the good characters look very pathetic and weak. What they did to Hulk and Spiderman is shameful. I need counselling now.

Isle of Dogs -- 9.5/10: I loved it. It's a Wes Anderson thing. I'm not as much in love with all his movies, but I sure as hell loved The Grand Budapest Hotel as well.

A Quiet Place -- 8.5/10: I am not naturally attracted to horror movies, so many of which seem so depressingly formulaic. But I really liked this one. Deftly done.

Tully -- 9/10: Notes from real life.
My buddy somehow didn't "get" the ending, which showed (to me) that Tully the night nurse was Charlize Theron's younger self, come back in her imagination. Dumb ass.
Great cast. This movie made me like Diablo Cody. Nothing in this known universe could dim my lustful admiration for Charlize Theron . . . even the 40 pounds she gained to do this flick.

So I finally saw this movie, took me two tries but after I got past the part with his wife I really got into it. Its very low key sometimes with subtle humor. Definitely worth the watch.


MetalMat said:
Dude you are in for a treat with "Little Big Man", it is the best movie I have seen in a while.
Click to expand...

Kick ass, great special effects. But overall a depressing movie. They really went out of their way to make all the good characters look very pathetic and weak. What they did to Hulk and Spiderman is shameful. I need counselling now.
Click to expand...

dude, thanos had the power gem.
he was power incarnate at that point.
kicking hulk's ass was expected once I saw him having the power stone.

what problem did you have in they way they depicted a teenage spiderman?

please keep spoilers out of here

Its about a free spirit who joined the marines and his relationship with the other marines recruits and his hard nose drill instructor. I watched this as a younger lad but I saw it was free on Youtube and watched it again and still holds its own. Yes its a TV movie, but it won some emmys and really is quite good. Short B&W TV promo spot https://www.youtube.com/watch?v=yF5h94kvSck

Peter Rabbit - 9/10 - solid family kids flick. My 3 year old loved everything about it. It had some very good effects and had a cute and touching story as well. Loved the rooster.

12 Strong - 6/10 - kinda boring and too long IMO. Not much happens really until the very end part. The end scene is pretty sweet though.

JEDI said:
dude, thanos had the power gem.
he was power incarnate at that point.
kicking hulk's ass was expected once I saw him having the power stone.

what problem did you have in they way they depicted a teenage spiderman?
Click to expand...

The ending says it all. It was pathetic. Not very hero like for Spiderman. Sure maybe people like humanizing him but I paid money to see the web slinger not a cry baby.

And don't get me started about Hulk. Hulk doesn't say NO, like ever. He is rage incarnate. Make him to fight to the death if necessary. Marvel damaged their brand with this movie.

1975 Charles Bronson train mystery flic set during the mid 1800's during the CA gold rush. Beautiful cinematography. I thoroughly enjoyed it, lots of plot twists aside from the gaping plot holes.

Danish web series about a group of teens/young adults in post-apocalyptic world where almost everyone was killed by a virus, originally brought by rainfall (stepping in puddles or ponds or anything like that will also f you in the pooper).

There's not really anything new or ground-breaking here but I like post-apoc fiction and I think the acting is decent enough. Plus it don't hurt that a couple of the ladies are quite attractive (thank God for tight jeans in the apocalypse, WUT WUT). It's entertaining enough to me where I stayed up late as poop last night watching it (had to work this morning).

a set of fake posters for modern films reimagined as classic films. 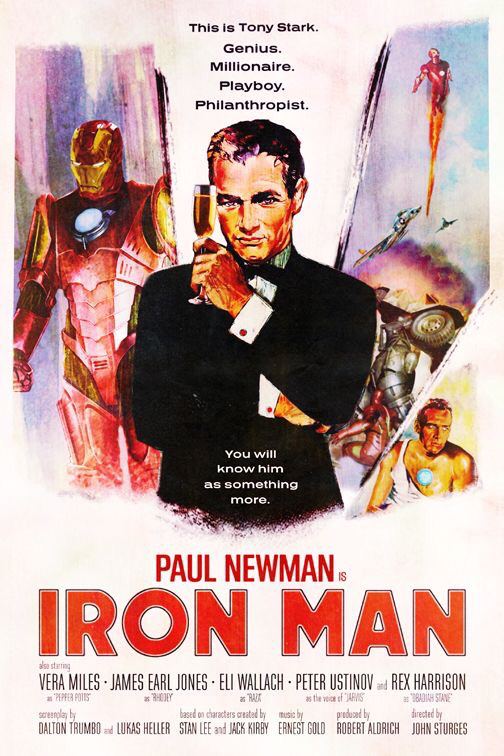 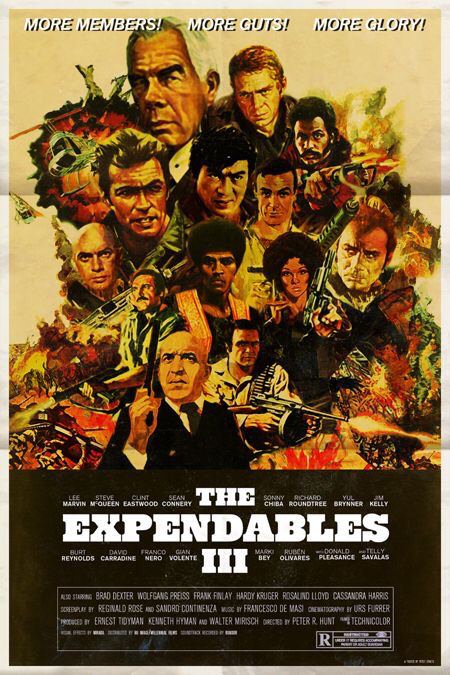 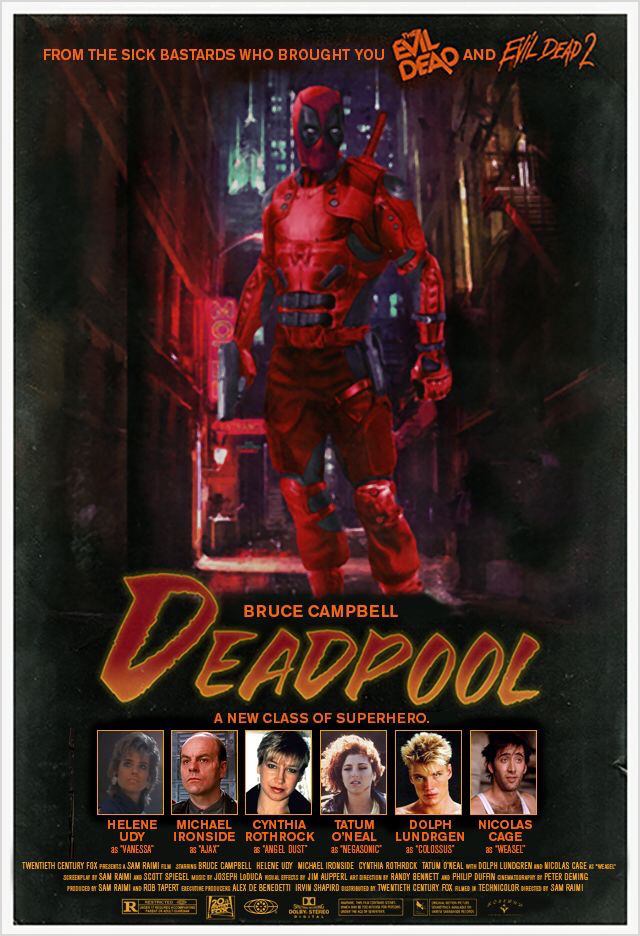 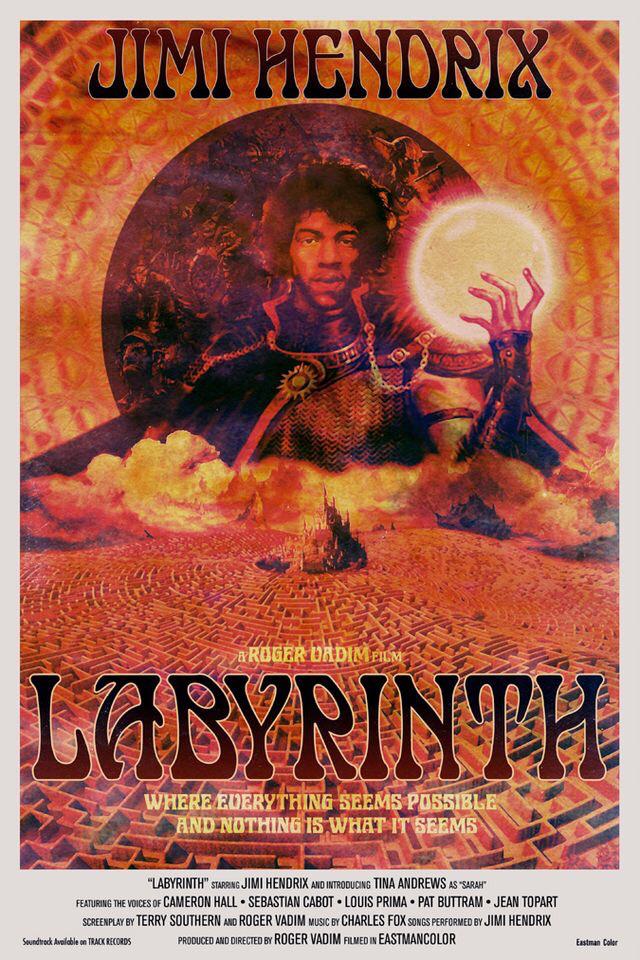 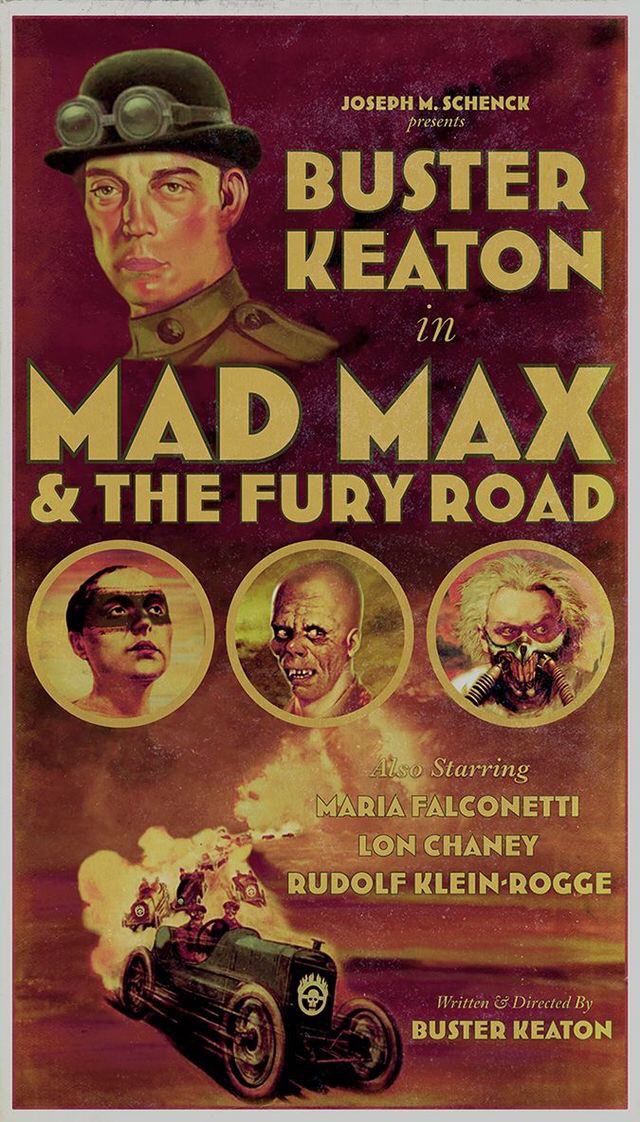 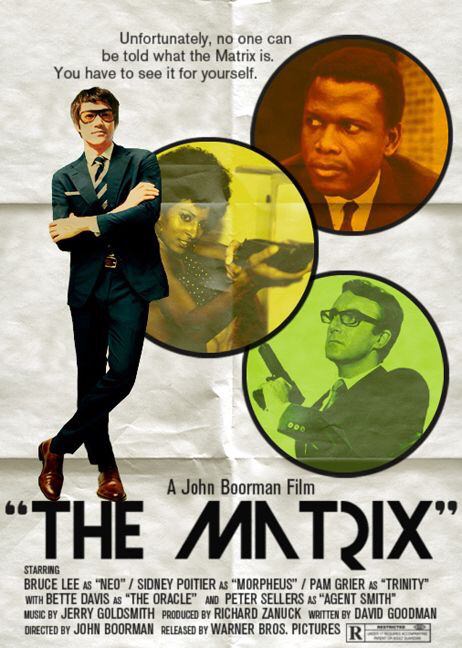 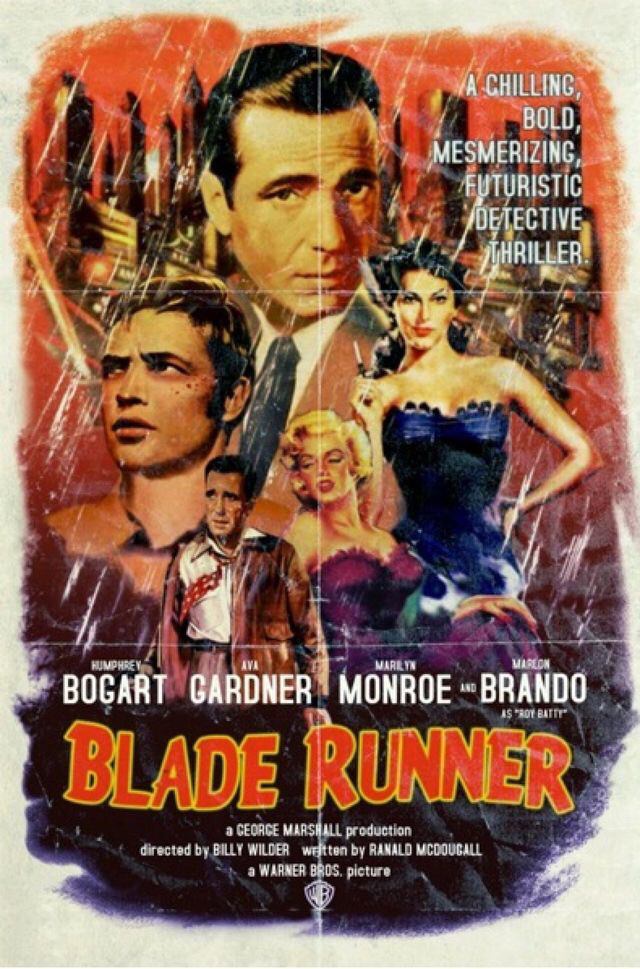 the last one in particular rings true.
Reactions: snoopy7548, clamum, slayer202 and 2 others
N

Just watch the trailer and you can save yourself about 75 minutes of time. It gives you 90% of the story. Kevin Bacon did a good job but not good enough to make this movie entertaining.
D

Little Big Man 9/10 Couldn't watch this in one go, the first half is hard to get into.

Thor : Ragnarok. 6/10
It was enjoyable but nothing like the marvell movies before.
The special effects were great but Korg, the rock guy voice was totally off. Did not fit at all.
Also for Surtur, he should have had a more rumbling voice like a voice with effects like something is constantly burning. Not found.
And although i like Led Zeppelin. I did not find it fitting.
These guys from Thor Raganarok should take a lesson from the sound director of ghost rider with Nicolas Cage.
Those guitar sounds added into the movie ghostrider were scary as hell fitting the ambiance.
I hope infinity is good, i still have to watch that one.

Ragnarok was excellent. The first two Thor movies were snooze-fests so I was very pleasantly surprised.

Nah, the great looks of Cate Blanchett did the work but it was nothing special.
D

Finally saw Black Panther. It felt like a total waste of a movie, it's only purpose being to introduce the main character. The story didn't grip me at all. 6.5/10 with 1 point added just for the last 20 min.

A Silent Voice. Total snooze fest. The story of a teenager who bullied a girl in his younger years and how that backfired on him. Now he's full of regret and is trying to make amends. 6/10 with 1 point added for the ending, because it was fucking beautiful.

Little Big Man 9/10 Couldn't watch this in one go, the first half is hard to get into.

Yea I had the same reaction to Little Big Man. I was having a hard time at seeing Dustin Hoffman as an indian I think. But his performance won me over and I gave it the same score as yours. Still can't believe I had never seen it before.

or at least half of it. It was boring, enough that i turned it off halfway through.
It should be the story of the Three Kingdoms, when General Cao tried to seize imperial power, and actual historical period akin to the middle ages. Instead, it's your generic, boring Wuxia film with on-wires kung-fu fighting, overtly dramatic acting, and a ridiculous runtime of nearly 3 hours (and there's a Part 2 as well).

6/10 - not good unless you are starved for some kung-fu action.

and since i couldn't go to bed having watched nothing satisfying, i watched In The Loop - https://www.imdb.com/title/tt1226774/reference

which is ... on IMDb they call it a "spinoff" but it really is just an extended episode of the british TV series The Thick Of It. Which you should watch before you watch the film.

Now, i happen to be a fan of the aforementioned, it's a tv show about a fictional UK government-in-charge, with all the ministers squabbling, backstabbing, and general incompetence that goes with it.
Brits have a way to film shows that are supposed to be "realistic" (no postprod, no costumes, no makeup) that while most of the time it just looks drab and awful, here it really works. (if you liked the UK Broadchurch, it inherited some of that look)
The star of the show is Malcom Tucker (none other than Peter "Doctor Who" Capaldi), and absolutely horrible man, who in his position as Director of Communication ("spin doctor") enjoys treating every one of his subordinates like shit, and his rants are real gems, i'm talking Simon Philip Hoffman-levels of insanity.