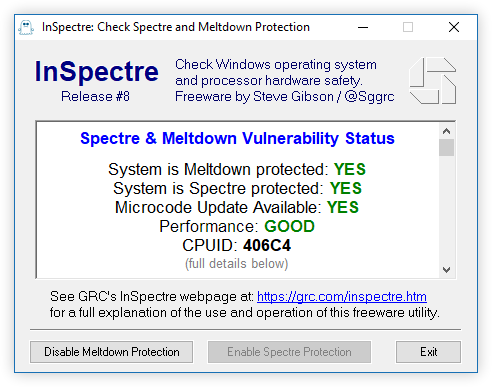 Here is a really good program to see if you are vulnerable to Spectre or Meltdown. It also has the ability to turn off the fixes if you are having severe slowdowns. Also if you click on the ghost in the upper left corner you can get more tech information about your system. When you run the program, read the text and see what's green or red to find out the vulnerabilities of your system.
Reactions: Puffnstuff and PliotronX

Thanks for the tip.

I tried it out. I'm a little sceptical of its "performance analysis" which appears to be nothing more than "if patch is installed then performance = slower".

It would be nice if One runs a fast Benchmark of each state instead of just complaining.

JackMDS said:
It would be nice if One runs a fast Benchmark of each state instead of just complaining.

Hold on, I'll just run the same quality of benchmark...

"Computer appears to be working just the same"

mikeymikec said:
I tried it out. I'm a little sceptical of its "performance analysis" which appears to be nothing more than "if patch is installed then performance = slower".
Click to expand...

I checked my notebook with all patches installed and it didn't show a slower performance.

We have to come to the Understanding that when it come to Real Science, Facebook and Twitter are useless.

Online Forums are Better, but for decades they do not perform Data Collection and inferences as it should by following Statistical Rules.

E,g, When One benchmarking (anything), One has to perform multiples of the excat same tests under the exact same condition, then compute the Standard Deviation and Stand Error estimate (this type of things are usually thought in Research and Statistics of None Liberal Art Graduate Schools), and perform a Test like this https://en.wikipedia.org/wiki/Student's_t-test

As as we can see now the affect of the Patches is typically estimated as 5%. slowdown

On the other hand, I have numerous amount of similar Computers that when benchmarking them (before the patches) under the same condition, the Deviation between them is greater than 5%.