How long have you been "PC" gaming?

Started playing/programming games in BASIC on our Atari 800. Had the cassette drive, etc. Played all the classics like DK, Pac Man, etc as well as Star Raiders. Next up was the Tandy 1000TX, I wasn't a big fan of it to be honest, but I loved Thexder. It was a great game that let me play as Starscream (or close enough for me at that age!). I also played a lot of Space Quest and Kings Quest as well as Marble Madness. From there on we had regular PCs. I remember using the Turbo button to speed up the game while playing Test Drive III.
Last edited: Jun 21, 2013
S

Late 80s to very early 90s is about when I got started. Not hardcore really until September of 1997, when Ultima Online took over my life. I had been playing consoles and had a PC with some games, but didn't really put that much time into them. Since my grandfather gave us his old laptop in the late 80's. It was a Zenith with an 8088 running at a whole 8MHz (I think). It was lots of fun running everything off 720KB floppies. It had two loud floppy drives and no HD. It had a blue and white monochrome screen but we ended up getting a CGA monitor. I remember thinking pink was used way too heavily in most games.

My mind was blown when we replaced it with an Amstrad 286-12 with VGA graphics and this magical thing called a hard drive (40MB). Eventually we even got a mouse! (well a trackball)

To this day, I feel like the golden age of PC gaming was the mid 90's. The 486-Pentium era games were just the best.

Since I was 5 or so, so late 80s, on an Apple IIe that my mother borrowed from work. I spent a lot of time playing Moon Patrol, Montezuma's Revenge, Dig-Dug and some crazy ninja game I don't remember the name of.
M

My parents bought a Mac II in the early 90s for their business. I remember playing Star Trek: Judgement Rites and Legend of Kyrandia on it. I remember how much better Star Trek ran when they upgraded from 2MB of RAM to 4. Unbelievable!

They bought me my own PC in the mid 90s. I remember it came with Windows 95 on a billion floppy disks. Doom was the first game I got and I was blown away. Been hooked ever since.

I totally agree with the mid 90s being the golden age. Maybe it's nostalgia, I don't know, but games these days don't seem to have the "magic" that they had.

Always had what we used to call an "IBM compatible" PC. First was something like the first Compaq "portable" computer ("portable" in the sense that a suitcase of bricks is portable) that my dad would bring home from work sometimes, and we'd play little text mode arcade games. This was... 1985 probably. So, coming up on 30 years. My grandfather got an XT clone around '86, so I'd play some other games at his house, and we got our own XT clone in probably '87.
R


How should I answer this question now?

However, when I spent a summer in England with one of my Aunts back in 1984 I played frogger on the C64. Cannot remember any other games because my memory is not so good these days.

In 1988, I played Airborne Ranger a lot on the commodore 128 at a friends house. Lasted on and off for a six month period until I got bored.

Then Nooooo computer gaming until.......

In 1992, I played one or two games of Dune and Red Baron at another friends house here and there. Did not last too long.

I was the type of person that hated staying home and would always love being outside the house playing sports or riding my BMX bikes.

But, my earliest memory of playing on a computer would have to be back in summer of 1984 while I was vacationing in England with family.

I guess that counts right?
S

Yes. Used to play on this on the school 386s at high school.

My very first recollection of gaming was on the TI99/4A so probably around 1983 or 4. 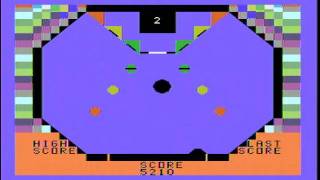 Since whenever the first The Bard's Tale came out.

My dad bought the family's first computer, a Mac SE, around 1988 or so. We had an Atari 2600 before that, but the Mac was my first computer gaming system. Not that there were too many games I played in sweet, sweet B&W, but I played quite a bit of Lode Runner and Dark Castle, and whatever else I got off the local Mac BBS.

I played a bunch on some of our old Apple computers in school but the one game I remember best is Loom. Me and a couple of my friends would play it and got pretty far on it. I can't remember if we ever beat it though.

After that was probably the Warcraft series then it snowballed from there.
S

We got our first PC clone in 1987, a Leading Edge Model D. It could play a mean game of Digger.

1988 or 1989 would of been when I first did some PC gaming on my uncle's machines. Believe a C64 and an Amiga. My folks bought me an 8086 a few years later that I then upgraded to an EGA adapter/monitor with money from a Summer job. My first gaming rig

The first games I played were on a Commodore 64.

Played some random RPG's and games throughout the years on various PC's I owned, but never really got into it.

About 3 years ago I decided to roll my own PC just for kicks and thought "what the heck, I'll build a good one." Got a STEAM account to go along with it and played S.T.A.L.K.E.R.

My mind was blown.
S

I used to play Number Munchers and Word Munchers on the old 286. We didn't get a much better computer until quite a bit later, but it was saddled with a somewhat poor ATI Rage Pro with 2MB of VRAM!

I remember playing that at my grandma's house quite a bit. Who needs PhysX!?