It should be fine. I doubt your laptop has a top end graphics card, so it's pretty much a non-issue.
V

my gpu is not bad but far from good...

It can boost up to 4.9 GHz on 1 core. I recommend monitoring your temps if your FPS is stuttering. You can manually lower the max boost until you are happy with the thermals with Intel XTU or Throttlestop. I cap my i7 laptop to just 3.0 GHz when my GPU is at 100% usage just to get better temps.
Reactions: DAPUNISHER
T

What laptop do you have? Does it have a seperate GPU? what GPU model in that case?

With no seperate GPU gaming performance will be very bad.

Games on average are more GPU bound than CPU bound, so if you have a semi-decent discrete GPU, at least MX250 then you'll be able to game at 1080p at low settings or 720p at medium settings.

If you don't have a discrete GPU, forget about gaming. This CPU iGPU is just horrible - it can't even run Crysis from 2007 at any settings.
V

How do I boost my CPU speeds to said "4.9 GHz" a link or youtube video would be helpful...

It's a "U" class CPU, meant for "Ultrabook" class that pursues thin/light/long battery life over performance and multitasking. It's combined with a single stick cutting memory bandwidth in half, and has no added GPU, only the on-die IGP. Adding to this is that cooling will be absolutely not designed to allow for sustained turbo/higher clock rates.

Without using something like Throttlestop or similar, which may not even work on 10th gen, you don't get to control how the CPU clocks itself, it's determined by other variables managed by the motherboard and operating system. Those peak clocks seen in the specs are for when something very demanding is asked of it, and it will ramp up to try to make it work quicker, but it will reduce back after hitting the time limit, something like 8 seconds or even less depending on temperature/battery/etc.

Basically the only things you can do are to make sure you have any misc junk closed out of when trying a game, and make sure the ventilation ports are not blocked by sitting on a bed/blanket/etc. It there is a second Ram slot, getting a matching 8GB module to increase to 16GB would enable dual channel, which would be a minor boost. Still, you want to ensure any games you purchase are ok for Intel IGP. Many less demanding indie/2d/2.5d will be fine. Most AAA/major titles won't be. They will either run terribly, or not at all.
V

I do have it on a cooling pad, and I have ordered 1 stick of DDR4 RAM to full my spare slot... I have never overclocked before and don't know very well how it works but I wanna learn so I can game. Not having a GPU is the biggest mistake I made but graphics does not mean a lot to me. As long as I can play and run the game smoothly...

Vazmar Klogs said:
I do have it on a cooling pad, and I have ordered 1 stick of DDR4 RAM to full my spare slot... I have never overclocked before and don't know very well how it works but I wanna learn so I can game. Not having a GPU is the biggest mistake I made but graphics does not mean a lot to me. As long as I can play and run the game smoothly...
Click to expand...

You're not overclocking a locked Intel CPU.

Like others have said, without a GPU, you will not be able to play demanding games on the laptop. I understand you not needing high frame rates / full HD resolution, but you can't enjoy games if they are a slide-show.
Reactions: Arkaign

Vazmar Klogs said:
Not having a GPU is the biggest mistake I made but graphics does not mean a lot to me. As long as I can play and run the game smoothly...
Click to expand...

Good freaking luck. You're talking about an Intel iGPU, with single-channel RAM. You would be lucky if your favorite game even launches with an Intel iGPU. (Many games lock them out of working, due to quality-of-life issues with Intel's drivers, and overall lack of capability for gaming with their iGPUs.)

Having only single-channel DRAM enabled, is going to cut the Intel iGPU's meager abilities in half again, due to only having half of the specified memory bandwidth.
Reactions: DisEnchantment, killster1 and Arkaign

Even if you don't have a graphics card, it doesn't mean you can't game. Plenty of awesome games are capable of being played on regular old integrated graphics, from Blizzard hits to Cuphead to the much revered Half-Life series. These are the best games you can play on Intel integrated graphics.

Add that stick of ram, learn how to optimize your settings, and above all stick to known good options for the games you buy, as Larry notes, most of the big AAA type will be either unplayable or fail to launch.

Little chance, but does the laptop have a Thunderbolt 3 port capable of eGPUs?
V

Damn talk about sassy! I have ordered another stick of ram (you would know if you paid attention to the other replys i have made)
Reactions: killster1
V

Nope! its sad, i looked into that stuff and those external GPU's are pretty cool! only if it worked with HDMI or USB...
V

I never said I was overclocking my CPU but i would like to look into it so maybe i could speed up my laptop...
V

I am happy to see "Firewatch" made that list! I love the game and have been playing it a lot along with world of tanks and heros and generals but i am also an avid bluestacks user but lets stay on topic. I am looking into "The long dark" but it says it needs a GPU but i have ignored that before and have had no problems... Other people say the game might "lock up" though it has not happened to me yet i hope i never run into this problem...
J

Vazmar Klogs said:
How do I boost my CPU speeds to said "4.9 GHz" a link or youtube video would be helpful...
Click to expand...

The boost speed is probably not something you'll be able to maintain in a small laptop. Depending on the bios, there are options for setting the power level durations for PL2, it will boost for that duration. Though the heat and power use is going to be huge, and your laptop won't be able to handle it, except for a very short amount of time, which it is already setup to do. In the end the 4.9 Ghz is a marketing gimmic on a small laptop. But you're free to fiddle. Just be aware that you may hit thermal limits, so keep an eye on that, I believe if your CPU goes over 100 degrees it will shut down, but you should avoid it getting to that point, it's not good for the components, perhaps your cooling pad will help a bit, but I don't see it helping enough.


Vazmar Klogs said:
Not having a GPU is the biggest mistake I made but graphics does not mean a lot to me. As long as I can play and run the game smoothly...
Click to expand...

To be honest, if I were to buy a laptop these days, not having a GPU is one thing, but I would definitely make sure it has thunderbolt, so that running an external GPU is possible, I looked up your laptop, and while it has USB type C, it doesn't have thunderbolt unfortunatly.

You mention running the game smoothly, that's a loaded statement. Smoothly isn't actually easy on compromised systems. Smoothly will depend on the game, the settings, and the hardware (both CPU, GPU, Memory, etc..). But in general if you want to run smoothly on an integrated graphics do something like this:
- Lower resolution in the game to the lowest it will go, 720p, perhaps
- Lower all game graphics settings, perhaps use preset 'low'
- Make sure no other applications are running, even go as far as turning off unused services (do a google search, you'll find some guides).

If the game you want to run doesn't run "smoothly" for you using the above procedure, then you're pretty much out of luck.

If it does, then you're in luck, either keep it that way, or start to bring up settings, probably start with graphics presets to medium. You'll notice the biggest improvement to image quality that way. If still "smooth" for you, bump up the resolution somewhat.

And remember, you need to do this on a per game basis, as some games will run more smoothly than others.

Different people call different framerates "smooth", so perhaps 30fps will be fine for you. But even FPS is complicated, and it's usually the changes of frame times that people notice as not being "smooth", hiccups. Those can often be caused by memory bandwidth problems (running single channel, especially with integrated graphics), but can also be caused by a weak CPU, or just the game and how it is optimized and utilizes the GPU.

Arkaign said:
something like Throttlestop or similar, which may not even work on 10th gen
Click to expand...

Good news. ThrottleStop supports Intel's new low power 10th Gen U series. In the right chassis, these CPUs are absolute beasts after some tweaking. How about over 4 GHz on all cores when fully loaded? The Core i7-10510U may come from Intel with a 15 Watt TDP rating but don't be fooled. It is quite happy running way, way, way beyond that spec. 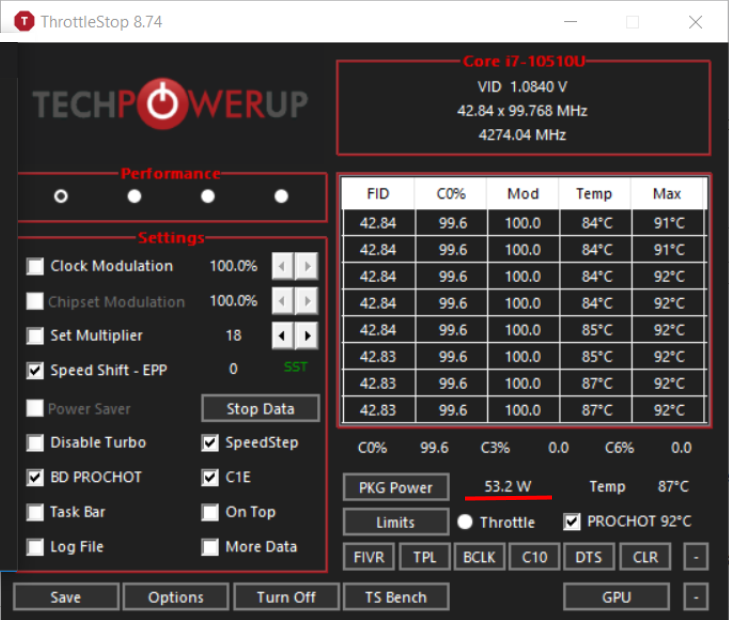 I just installed ThrottleStop 8.7.0 from TPU. Is there a way I can get more performance out of my Celeron 4205U 1.8Ghz laptop? I don't think that it has turbo features. I enabled SST, and set the multi to 18 (highest I can set it at).

This so much. I've been able to intercept a few family members trying to buy machines with Radeon 530's (yes leaving out RX is intentional) that also have a Ryzen U series processor. It's happened with Nvidia as well but since those are paired with Intel UHD it's less likely that the iGPU is faster ;P

People really need to do their homework.
Reactions: Thunder 57
V

thank you uncleweb this i good to know! but do you know how to use ThrottleStop? i have discord we can talk there...

Vazmar Klogs said:
thank you uncleweb this i good to know! but do you know how to use ThrottleStop?
Click to expand...