For the average person, is there really a need for a dedicated camera anymore?

I have a Sony a6500 and I hardly ever use it and have been flip flopping on selling it the past few months, I have someone that is ready to buy right now for 975 and I am seriously considering it.

I have a Canon 70D with several very nice lenses.

While most of my photos are from my iPhone, my really great photos invariably are from my DSLR. The quality those lenses produce is hard to replicate in a phone...especially when taking pics of the kids.
Reactions: misuspita

The problem is, what is the average person? For simple snapshots and selfies, the phone cam is adequate. If one likes photography as a hobby, the phone cam lacks, and the handling of product is more complex than with a dedicated digicam.
Reactions: JEDIYoda
R

I have nothing but trouble trying to take pics with my phone. Invariably I touch something and everything on the screen changes. Trying to set the phone up for a shot where the auto setting will not work is impossible for me.
The fix : I have a Nikon D40x but it is too big to carry and keep handy in the car etc. So I bought a Sony Cybershot DSC RX100M3. So far I love it.

The fact that
(a) you ask the question
and
(b) you hardly ever use it
seems to indicate that for you, no, you don't need it.

Most people today use only their phones to take photos. So the answer is clearly "no".

I happened to walk past the camera display in the local Walmart a couple weeks ago and was blown away by how few cameras they now carry in the store. Probably 1/4 the number of models that they had on display five years ago.

i have a small Canon M6 and im considering selling it too. in good daylight, the samung s7 is good enough.
will still keep the Canon 80D for serious vacation photos and videos though.
J

Yes, for the average users the camera on recent phones is good enough for them. The recent ones are now using computational methods to create effects only possible before on dedicated cameras, such as portrait mode (shallow DOF), better digital zoom and more. The lack of optical zoom is now being handled by dual lenses. Low light is still not up to par with a larger sensor camera but has significantly gotten better compared to older phone cameras. Throw in the convenience factor and you'll know why camera sales are shrinking every year.

I too have the a6500 and a Galaxy s8. They complement each other perfectly. However it does take more effort with the camera because I have to make sure the batteries are charged and lug it and any lens I want to use around with me all day. It's not something that is "get up and go" like a phone. But I enjoy photography so this doesn't bother me.
N

Went on my honeymoon last year. First real vacation I've taken in 6 years. We took our phones (iPhone 6, and iPhone 7), and a Sony point-and-shoot camera my wife got as a gift years ago. It's maybe a $150-200 camera. The pictures from the camera blew everything the phones took out of the water. From that experience, it is my opinion that phones can't take night shots, period, and if you ever intend on blowing anything up, you need an actual camera.

However, to answer your question, for the average person, no probably not. Particularly the younger generation who doesn't even care that their photos disappear forever after just 10 seconds.
T

I don't think any average person ever really needed a dedicated camera but they always want one. If you have no interest in photography, why bother? It's like buying a $2000 computer when all you do is watch videos, browser the internet and use Word. People just buy things they want even though they don't need it. But it is good for those of us interesting in these areas because it allows for better products at a lower price.
Reactions: Syborg1211

turtile said:
I don't think any average person ever really needed a dedicated camera but they always want one. If you have no interest in photography, why bother? It's like buying a $2000 computer when all you do is watch videos, browser the internet and use Word. People just buy things they want even though they don't need it. But it is good for those of us interesting in these areas because it allows for better products at a lower price.
Click to expand...

tl:dr If all you gonna shoot is wide-angle auto, don't even bother with a standalone cam anymore.

Well that settles that.
S

turtile said:
I don't think any average person ever really needed a dedicated camera but they always want one. If you have no interest in photography, why bother? It's like buying a $2000 computer when all you do is watch videos, browser the internet and use Word. People just buy things they want even though they don't need it. But it is good for those of us interesting in these areas because it allows for better products at a lower price.
Click to expand...

This^^. If you're too bothered to bring your camera out, then you're not that into photography. Also, wanting to capture random snapshots on your phone does not mean you are into photography.
Reactions: radhak

With that said, I've taken so many photos that are completely impossible with smartphones that even though I'm just a casual hobbyist, I don't think I could ever give up having a dedicated camera system. The smartphone tech is truly amazing and I can't wait to see where it goes from there, but at some point there's just no getting around the physics of it if you want to achieve a certain shot.
Reactions: Carson Dyle
J

Syborg1211 said:
This^^. If you're too bothered to bring your camera out, then you're not that into photography. Also, wanting to capture random snapshots on your phone does not mean you are into photography.
Click to expand...

Lol, this describes my sister and BiL exactly. They have cameras that can easily put their phones to shame but they never use it or take it anywhere. Then they'll be like "OMG the pictures from your camera are so good." Well all of your cameras sitting at home collecting dust are just as capable if you would just put in an ounce of effort to bring it along.
Reactions: radhak

jtvang125 said:
put in an ounce of effort
Click to expand...

No effort necessary for carrying your phone in your pants pocket.

Computational photography is growing by leaps and bounds - who knows what the smartphone camera will be capable of in 2-5-10 years. This is great for snapshot shooters who are getting more, high quality photos without an ounce of effort.

jtvang125 said:
Well all of your cameras sitting at home collecting dust are just as capable if you would just put in an ounce of effort to bring it along.
Click to expand...

I think the ounce of effort that people are unwilling to do is to transmit the images from the camera to the internet. It isn't just that they have to charge and carry the dedicated camera--I think many people are willing to do that. It is that there still isn't a great way to get the images to where people want the image (Facebook, Instagram, Shutterfly, etc).

Yes, there are Wi-Fi cameras, but so far all that I've tried suck. There are Wi-Fi SD cards but I hear that they suck. I personally just take out the SD card and put it in an adapter to my phone, but even that is slow since I can't see the images in a size bigger than about 1 square cm so I just transfer all files and delete the ones I don't want. Unless the cheaper dedicated cameras connect directly to the various apps in a user friendly format, they will be doomed.

Me personally, I just bought a dedicated camera: an Olympus Tough TG-5. I wanted a camera that I can take anywhere without worry. After losing a phone and three dedicated cameras to water/rocks I hope I learned my lesson. I like it so far, except the Wi-Fi feature is lacking.
Reactions: radhak

And this is where the new low-energy BlueTooth connected cameras can shine.
They're constantly connected to your phone, making it trivial to send photos across.

I believe cameras like Nikon D500 and Panasonic G9 already have this; I'm not sure what more consumer oriented cameras have it.
S

My a6500 has an app you can get on your phone that let you transfer photos
Reactions: gradoman
J

Most of the newer Sonys have the app to transfer photos and allow tethered shooting from a smartphone. There's also a setting you can turn on in the camera where every time you turn the camera off it'll automatically send the last batch of photos you took to your phone. This is over wifi and not BT. The a6500 has BT but it's only used for geotracking.

Yes, it's an extra step but the IQ difference is worth to me to use my camera than my phone.
C

The average person would likely not shoot photos. The only reason that they do shoot photos is because they can do so with a camera phone that they carry in their pocket mainly for other reasons. I, too, carry a smart phone, but use it for photos only in situations where I absolutely need to take a photo and do not have one of my real cameras with me (fairly rare occasions). As has been expressed previously in this thread, the camera ap in smart phones is convenient since, if you need a "cell" phone (as most of us now do), you have it with you most of the time. The downside is its lack of flexibility. No photographer would put up with the tedious nature of making manual adjustments to a cell phone. A good follow-up question to that posed in this thread might be to query smart phone shooters as to how many photos they take where they make manual adjustments (other than switching between front and back facing lens). I would guess the affirmative response would be less than 1%.

Smartphone cameras are capable of capturing some amazingly humbling images, but they will not soon compete with real cameras (SLRs, DSLRs, and other more recent dedicated camera incarnations).

JimKiler said:
it is interesting to see point and shoot cameras in stores or being used these days. Phones are probably better than most point and shoots.
Click to expand...

There's still a tiny market for them because not everyone has a smart phone or one recent enough for good pictures. Some want optical zoom. I think the rest are just uninformed about the capabilities of the camera in the latest phones. Dedicate cameras > smart phone cameras to them.

Personally I would not go compact on anything less than a 1" sensor.

Here are some caparison shots between the iPhone X and the OP's 6500. 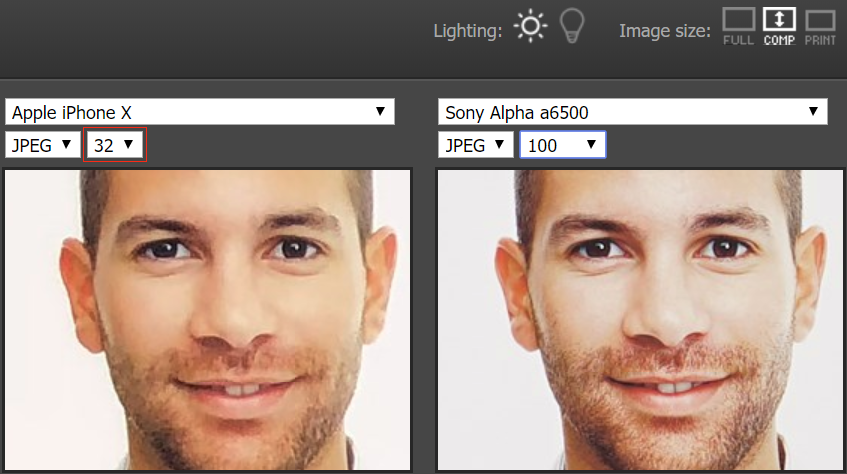 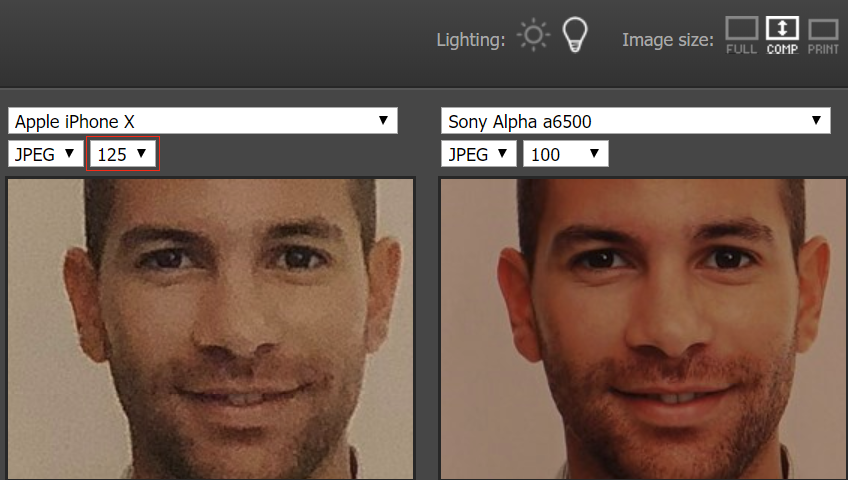 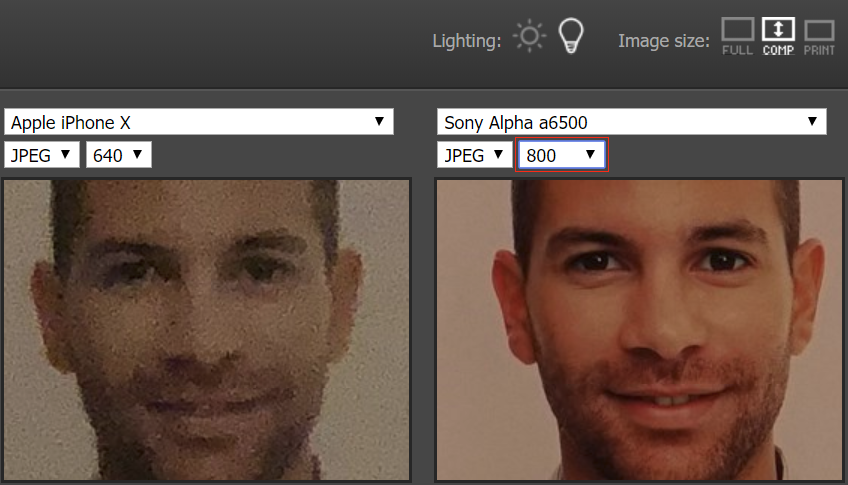