DirecTV is dumping NewsMax after NewsMax tried to drastically increase their fee despite falling viewership. GOP spins that as "censorship."

Feel the GOP outrage. FEEL IT! 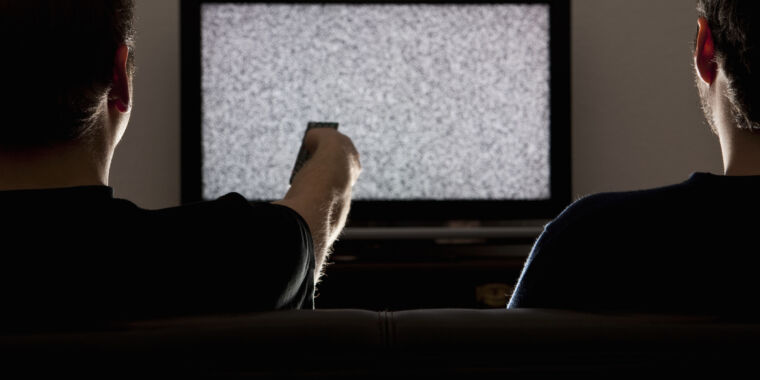 "On multiple occasions, we made it clear to Newsmax that we wanted to continue to offer the network, but ultimately Newsmax's demands for rate increases would have led to significantly higher costs that we would have to pass on to our broad customer base," DirecTV said in a statement provided to Ars. (AT&T owns 70 percent of DirecTV.)

Rep. Wesley Hunt (R-Texas) and 41 other Republican members of Congress last week sent a letter to the CEOs of AT&T and DirecTV claiming that DirecTV appears to be "actively working to limit conservative viewpoints on its system." The letter suggested the Newsmax decision is part of what Republicans called an "un-democratic assault on free speech" orchestrated by congressional Democrats and the White House in coordination with private companies.

The Republicans' letter asked DirecTV to provide information on viewership ratings of Newsmax and liberal news channels and details on "the corresponding fees paid by your company to these networks."

DirecTV responded to the lawmakers with a letter on Monday. DirecTV said Nielsen data shows that "Newsmax's average household audience is only 101,000 households [nationwide], representing less than 0.1 percent of total TV households. That is 92 percent lower than Fox News. If Newsmax ceases to authorize our carriage of their channel, our customers will still have access to their clearly preferred conservative news channel, Fox News, which has more viewers than MSNBC, CNN and Newsmax combined."

DirecTV also said that Newsmax is "distributed online on popular streaming platforms for no charge, including to viewers who do not have a Pay TV subscription."

"Newsmax proposes to change this model," DirecTV told Republicans. "In effect, it has stated that if DirecTV and other Pay TV operators will pay it the fees it wants, then it will cease transmitting its current channel to the 55 million US households that don't have a Pay TV service. In other words, 55 million US households would no longer be able to access Newsmax in its current form unless they acquire a Pay TV subscription. Under this change in model, who's doing the de-platforming? Certainly not DirecTV."

The Newsmax article accusing DirecTV of censorship seems to confirm that, until recently, no TV service providers had agreed to pay for the channel.

Newsmax: "Give us more money!"
DirecTV: "Um, I don't think we're gonna do that..."
Newsmax:"DISCRIMINATION! CENSORSHIP! YOU'RE LITERALLY RAPING ME, DIRECTV! I'M AN INNOCENT CHILD AND YOU'RE RAPING ME!"
/Newsmax masturbates furiously
Newsmax: "Maaaah freeeeeze-peeeeeaaaccch!"
Reactions: dank69, hal2kilo, Dulanic and 4 others

REPUBLICANS ARE LIARS
Reactions: hal2kilo, Dulanic, zinfamous and 5 others
B

In other news Republicans are totally ok with using their power to force their base into a rent seeking relationship for something they previously got for free. GOP “populism” in action once again.
Reactions: hal2kilo, zinfamous, KMFJD and 1 other person

The important point, in my opinion, is that whatever they accuse others of doing is exactly what they have in mind to do if they get the chance.
Reactions: KMFJD and Vic

Oh come on....
Trumpies do not have satellite tv, that involves technology and the science of getting tv from the skies. Trumpies only believe in oil, guns, and a cable screwed to the back of their tv. Hee Haw

Agreed. Repubs want to freely broadcast outright lies disguised as "opinionated free speech". To this very day I still cling to the premise that truth in advertising still has a place in the dissemination of information over mass media. The Repubs have, out of necessity, decided to resort to lies and disinformation in the form of politically derisive propaganda. Had their leadership confessed to the actual truth and facts about how they are exploiting their rank and file member's loyalty to party for the exclusive benefit of the aristocrat class of the nation their party would cease to exist.

Plain and simple: the party either lies through their asses about who they actually serve or be honest with their constituency and lose their grip on the reins of power they now possess from that day forward.
Reactions: hal2kilo
F

With Twitter the Republican position was ‘you must publish other people’s speech at your expense or it is censorship.’

With Newsmax it is ‘you must affirmatively pay people for the privilege of publishing their speech at your expense or it is censorship’
Reactions: hal2kilo and Meghan54

I always enjoy when members of congress (almost always GQP) show that they have absolutely no understanding of what free speech actually means.
Reactions: hal2kilo and Meghan54
B

Pens1566 said:
I always enjoy when members of congress (almost always GQP) show that they have absolutely no understanding of what free speech actually means.
Click to expand...