Hello, I am new here.
I have a technical question about bug zappers.
I live about 60 yards away from a swamp, and the bugs are just terrible!
Yes there is mosquitoes, gnats, biting flies, fish flies, and thousands of other species of bugs, moths...etc.
Sitting outside at night is very unpleasant, to say the least. I have a petty big yard, in which I have been running my grand parents old bug zapper, that I remember them having in the early 1980s.
This zapper is an absolute workhorse...it doesn’t matter how caked the grid gets...it just keeps frying them suckers, to a crisp.

Does anyone have any clues on why this would be happening?

Are the newer bug zappers, which most likely incorporate cheaper, lower quality transformers, getting overwhelmed by the shear numbers of bugs?
If that isn’t the cause, then I’m lost on this one.
T

Not sure
Have you tried one of those CO2 traps?
Reactions: killster1

Also this would get more responses in Home & Garden

if it's one of these, maybe now we know why they seem to be more resistant to clogging than others, and why people are not responding to the recall....

To be honest, after you clean it, it should work like when it's new.

It's possible the new ones are safer, and have mode moderate electrical characteristics, this may also mean less resistance to clogging if they do not burn out the insects that get stuck or are not able to arc through the insects without good contact. Anything that is effective at burning out stuff, is also more liable to start fires. Just a hypothesis.

There are traps that just create a negative pressure to suck in insects that get close, and attract them with a combination of CO2 (through a gas burner, this is effective for mosquitoes), light etc.

Sucking them into a trap instead of electrocution avoids issues with clogging and has no fire risk. Maybe try getting one of these.
Last edited: Jun 12, 2021

Bug zappers are ineffective at reducing the number of mosquitoes or biting flies. 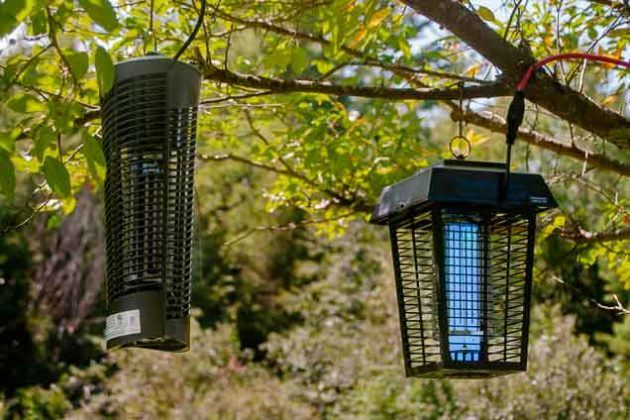 Do Bug Zappers Work? Yeah—About As Well As Any Other Indiscriminate Wildlife Slaughter.

Bug zappers kill the wrong bugs—to control bugs without a spray repellent, use a spatial repellent or a fan instead.

Have you considered using a fan? Flying insects generally avoid strong airflow... and have even less choice in the matter if the flow is blowing them away from you.

One of the big issues with bug zappers is that they attract bugs so drawing more into the area. You can set them at the perimeter hoping to reduce bugs in the middle of the area but then have to string power to them. There may be some solar now but they're bound to be weaker to preserve battery life if not just the general made-in-china-junk, factor.
Reactions: Gardener

If you have lots of mosquitos...get a Dyna-Trap.
My property backs up against a wetland/forest area on the Washington coast. Mosquitos can be thick as hell...I bought a 1 acre Dyna-Trap...skeeters are barely noticeable. I have to empty it every couple of weeks.
For BEST results, use the skeeter attractants. They DO make a difference.

Maybe when it shorted out it burnt out the mosfets slightly, now there's less chooch factor. Stuff is built so cheaply now days it's crazy.

I stopped bothering with bug zappers though, unfortunately they kill all the good bugs and do not actually attract the bad bugs like mosquitoes. Mosquitoes are not attracted to the light but rather to CO2.

I experimented with generating CO2 inside the bug zapper so they try to go inside but don't think I was generating enough and it did not seem to do much.
J

I had a pretty strong bug zapper years ago. (Lived out in the country )

They don't work very well at all, but they do provide some entertainment value while you kick back and watch with a six pack.
Reactions: pcgeek11

Jimminy said:
I had a pretty strong bug zapper years ago. (Lived out in the country )

They don't work very well at all, but they do provide some entertainment value while you kick back and watch with a six pack.
Click to expand...

I haven’t seen one in action for decades and I agree they seemed to attract more bugs than they killed but again this opinion is probably 30 years old.
What was fun was watching my friends kids run around with these

yes they work provided you chase after bugs with them

Those are fun. I also like to freak out my friends by shorting them out with metal objects. They wonder how I'm not getting shocked lol. Isolated high voltage circuits can be fun.

Of course I would by lying if I said I never got a shock by actually sticking my finger in there.
T

I’m not trying to be rude, but I came on here to ask a question....not to be talked out of my methods. My methods work! And I love watching em fry!
I already have mosquito traps! They work decent.
Beneficial bugs? I live right next to a damn swamp....there are plenty of bugs, beneficial, or not....I don’t like breathing in, eating,and or being harassed by the swarm of bugs nightly!
Turning on the zappers, draw them to the edge of my yard....not in our face! Without the zappers, we are literally overwhelmed by them!
Fire hazard? My charm glow hasn’t burnt down yet, and it’s been in service since the 80s....so I’m not worried.
Whether you people believe it or not....the charm glow works awesome, don’t believe me...tell it to the nightly pile of bug carcasses!
So, thank you all for your opinion, but that’s all it is!
Thanks to the one dude who actually replied to my actual question.

Dunno man, I think you got some decent replacement suggestion.

I like the concept (since this is highly technical) to build your own with more power and a larger grid to keep it from clogging.

A few things from my life experience. They say mosquitos don't migrate....they spread more locally....but they can definitely be carried by the wind and reproduce where standing water is found. When I was on the beach one time, black biting flies were being blown from the marsh to the beach. About 3 days later, the wind shifted due to a low pressure moving and the flies got sucked back inland. (100 yards one direction vs the other)

Consider removing as many places they might reproduce as possible on your property and control populations through fogging or spraying. They make those bug free backyard sprayers that connect to a water hose. You just connect it and spray your yard. Might even help with other pests. This is based on the last comments that once they blow onto your property, they may setup shop there unless they're blown back to the swamp....but they look for standing water.

You may be able to contact your local health department and request them to fog your neighborhood. I know you can't help the swamp, but controlling your own back yard may help some... I know with Zika and bird flu they were providing that kind of service in a lot of areas a few years back...just make a call and see.
You must log in or register to reply here.
Share:
Facebook Twitter Reddit Tumblr WhatsApp Email Link