Not even worth talking of the alleged 56W at idle of the 7870K in what looks more like a viral review than anything else, i mean whoever wants to do a serious review would check if his measurements and scores correlate with other reviews.

All this is, is a 845 with the IGPU activated on a AM4 Socketed PCB so it can use DDR4. Totally pointless in my eyes. I swear AMD better not me taping 4 of these cores together and calling it ZEN.
So far there is nothing Zen about this release.
I

Justinbaileyman said:
2 x 1MB L2?? this is getting worse and worse
Click to expand...

Core has had 256KB L2 since Nehalem. Just thought I'd point that out. Carrizo/BR's L2 cache performance is actually quite good. Its the lack of an L3 cache that's holding it back, not the size of the L2.

Insert_Nickname said:
Core has had 256KB L2 since Nehalem. Just thought I'd point that out. Carrizo/BR's L2 cache performance is actually quite good. Its the lack of an L3 cache that's holding it back, not the size of the L2.
Click to expand...

That was one of the nice things about the C2Q's, especially Yorkfield (2x6MB), a massive L2 cache (for the time). It also masked the memory latency very well.
A

One would have thought that Stoney Ridge was a 250-350$ laptops dedicated chip, but seems that HP has another opinion and they use it in their ProBook line, prices are quite high and most amazing is that for a hefty 50$ more you can have the same laptop but with a 2.4GHz Bristol Ridge...

The ProBook 455 G4 is the only model to feature a processor made by AMD, being powered by a 7th generation APU with Radeon R4 or Radeon R6 graphics (three processor choices available). HP promises up to 16 hours of autonomy for these new machines

Well, the performance boost needs to be enough to justify replacing your motherboard.

LTC8K6 said:
Well, the performance boost needs to be enough to justify replacing your motherboard.
Click to expand... 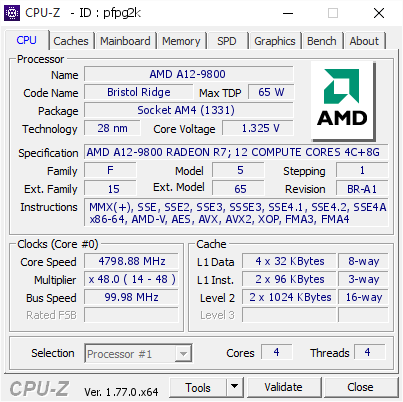 I don't see a bus overclocked. Does that mean that these A12-9800 APUs are unlocked.

And its good news, because WR in Superpi 32M AMD is coming

Ok well now you have my attention. I thought that there wasn't going to be any overclocking with these chips. Can we please see some benchies with this running at that 4.8Ghz?? Or is it not stable at those clock and was this just a Death Run??

Surprising to see that these appear to be unlocked, since the SKU doesn't indicate that.
Would love to know what the actual voltage was during the 4.8GHz validation, since CPU-Z is showing the default voltage for P0 PState (3.8GHz).
1.6V++ I would imagine.

if its really 1.325v then these should easily hit 5.0Ghz unless CPUZ just isn't reading the Voltages correctly.

Obviously it is reading it wrong (new LPC/IO, on a new motherboard). If it was really able to do 4.8GHz @ 1.325V then why bother with a 4.8GHz validation in the first place, when it could certainly do much higher at higher voltage. When CPU-Z doesn't support the environment controller (LPC/IO), it reads the VID from CPU registers instead. When you overclock you are adjusting the multiplier of P0 PState and 1.325V is a normal VID for P0 on 9800.

If the corean site has at least his CPUZ shot right then it should be anything in the 1.5-1.55V range. 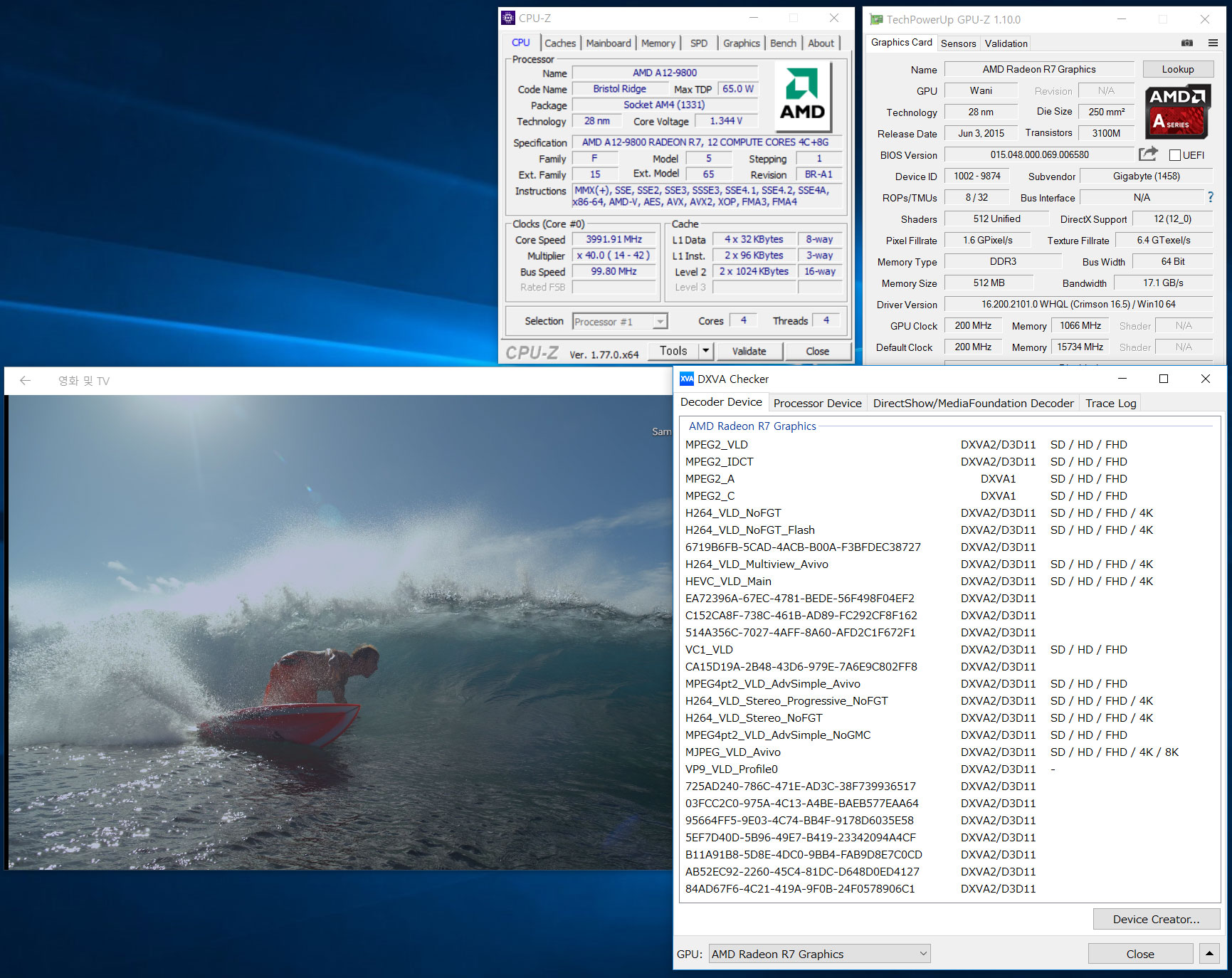 Next question is - is that an ES or a retail chip??

It has a "D" letter above of the "made in / diffused" in text, so it is EVT silicon shipped to the partners / press.
Marked as a retail part, but still evaluation silicon.

Justinbaileyman said:
2 x 1MB L2?? this is getting worse and worse
Click to expand...

It's about what we expected though. BR is just Carrizo with some minor tweaks.


Azuma Hazuki said:
The only reason I can see them doing that is so as not to cannibalize Zen sales.
Click to expand...

The reason to do it is to save money. They didn't want to do any kind of redesign on an XV-based core when all their eggs are in the Zen basket. AMD still has limited resources. It was easiest for them to take the work they had done on Carrizo and drag-drop it into Bristol Ridge to serve as a stopgap until they can launch Raven Ridge. There's no way a 2x2Mb l2 cache would cause Bristol Ridge to cannibalize Summit Ridge sales.

Don't expect DDR4 speeds above 2400 MHz out of BR unless bclk OC is easy and convenient on AM4.

I would like to know more about that setup. Like his memory speed/timings and some other things. Looks pretty good, though. For anything that doesn't need the extra l2, that 4.8 GHz BR ought to smash Kaveri.

Carrizo/Bristol Ridge have significantly faster L2, and in a majority of non-gaming benchmarks, the XV-based CPUs whip the SR-based CPUs soundly. In a fair number of games, the opposite is true.
S

DrMrLordX said:
Carrizo/Bristol Ridge have significantly faster L2, and in a majority of non-gaming benchmarks, the XV-based CPUs whip the SR-based CPUs soundly. In a fair number of games, the opposite is true.
Click to expand...

Well most of the gaming comparisons weren't "normalized" to the same mhz.

I do remember that the total average mhz for mhz difference was like 2-3% in gaming for Kaveri/Godavari if I recall correctly.

In addition to that we get different ram and updated Chipset...these should all play in Bristol Ridges' favor and at least remove those pesky 3% average hz for hz gaming "loss".

Not sure how much This wccftech article is to be trusted...but at least there it looks like that even the shitty OEM version seems to outperform Kaveri on all ends. But then again...the test there is also hella awkward. 1600mhz DDR3 vs 2133mhz SINGLE CHANNEL DDR4...just a big plain "wat?" xD
You must log in or register to reply here.
Share:
Facebook Twitter Reddit Tumblr WhatsApp Email Link