I'm still on W10 pro x64.
Wondering if the performance issues are still present in W11

With the expiration of another OS approaching, is it time for me to upgrade yet ?

Yes, me. I went back to W10 and contemplating Mint Linux. W11 is an advertising platform for MS.
0
I

Noid said:
Wondering if the performance issues are still present in W11
Click to expand...

Win11 UI changes are annoying and the UI doesn't feel as smooth as Win10. So far, there is no compelling reason to upgrade, other than for better utilization of E-cores on Intel 12th/13th gen CPUs.
Reactions: Shmee and CP5670
0

Upgrading to Win 11 Pro was a bit of a problem, my usual means using an ISO didn't work - so I used Mickeysoft installation app. After that it was just a matter of normal tweaking for a new OS and finding some stuff that's been moved around or hidden. I can't recall having any problem with my usual applications. I had done a clean install of Win 10 in 2020 - so I just went with an upgrade this time. Activation for Win11 and Office 2021 went fine.
0
I

We have 1 Windows 11 PC is our home, all others are Win 10. That lone PC (brand new Lenovo Yoga 6) has an issue where is decides to lose connectivity of the wireless card. Disabling it in the Bios and then re-enabling it seems to fix it for a while. I've contemplated installing Win10 on it to see if the problem persists, but haven't tried yet. It's rather annoying. We plan to stay on Win10 as much and as long as we can.
Reactions: igor_kavinski
0

Been an early adopter (upgraded from W10). No significant problems until now but I don't like the new GUI design - for me it is a step back from the clean W10 design (after removing all the unnecessary rubbish from the task bar).
Especially the centered task bar is a huge fail. Whenever you open a new program the whole thing shifts, producing missed clicks. Thank god it can be snapped to one side.
I am happy that at work W10 will remain for another while and hope that MS will make up their minds.
Reactions: igor_kavinski
0
T

Check the drivers. Otherwise if it's an ADL CPU look at the ax411 and boost your speeds in the process. For under $20 it gets me to 1.5gbps on the LAN.
Reactions: Ajay
0
I

Tech Junky said:
Check the drivers. Otherwise if it's an ADL CPU look at the ax411 and boost your speeds in the process. For under $20 it gets me to 1.5gbps on the LAN.
Click to expand...

The drivers have been downloaded from Lenovo's site with no affect. It's an AMD CPU on this particular model, but it shouldn't matter, the on board NIC should just work, especially on a unit less than 3 months old.
0

In2Photos said:
The drivers have been downloaded from Lenovo's site with no affect. It's an AMD CPU on this particular model, but it shouldn't matter, the on board NIC should just work, especially on a unit less than 3 months old.
Click to expand...

When that happens I go straight to the Wireless OEM's sight and grab their latest drivers. Lenovo, Dell and HP tend to be conservative and run older drivers. In any case, good luck!
0
I

Ajay said:
When that happens I go straight to the Wireless OEM's sight and grab their latest drivers. Lenovo, Dell and HP tend to be conservative and run older drivers. In any case, good luck!
Click to expand...

Unfortunately it doesn't seem to be available on Realtek's website for some reason. The latest one from Lenovo is from June 29. Realtek RTL8852AE
0
T

The Intel® Driver & Support Assistant helps keeps your system up-to-date by detecting when updates are available.

Ahh, that's a different story. Those tend to use generic drivers from MSFT. Maybe an updated driver can be found in an OEM pack like Dell uses. Not seeing anything relevant though.

I would ditch the RTL card though. Intel shines when it comes to just working. I did some testing with a MTK card a couple of months ago and it didn't work well in W or Linux for my purposes but, might have been a good client adapter. Since you have an AMD CPU you could try the MTK7921 or AX210 depending your needs.
0

Building a X570 tested both w10 and w11 (upgrade and clean installation). I am now on w11 and no problems so far. Yes the GUI is a bit different but the basic tools (Device Manager, Control Panel, etc.) are still there.
0
C

I use 11 on a surface pro but am sticking to 10 on the desktop. There is no benefit to 11 for games and my custom dark theme for 10 doesn't fully work in 11. The UI changes are generally bad but can be reverted with third party tools. I'm also reading about issues with the Logitech LGS ssoftware which is needed for my G13 keypad.
0

In2Photos said:
That lone PC (brand new Lenovo Yoga 6) has an issue where is decides to lose connectivity of the wireless card.
Click to expand...

I bought a HP Spectre two years ago from Best Buy that had W10 on it. I waited awhile before upgrading to W11 on it, even thou it said it was Ok.

However, the Bang and Olsfen speakers would not connect to the Realtec audio drivers. So --- I had no sound for about 8 months. Put a bunch of complaint, along with others. They started working again on an update last month.
Reactions: AAbattery and igor_kavinski
0

Thanks to all who took time to reply.

I prefer 11's UI actually. The only issue is I tested 10 on this build before switching. I did note around a 4% performance loss on some benchmarks after the latest 22H2 update. Heaven and Firestrike mainly. It games well, and no crashes.
0

I tried the beta Windows 11 on my X99, and then went back to 10. Now that motherboard is in a Truenas. I probably won't touch Windows 11 again for some time. I have stuck with Windows 10 on my AM4 boards. No need to get Windows 11 at the moment, unless someone is running a P+E core setup.
0
M

I have W11 on my laptop, which I use only for showing slides in meetings. For work I use W10 on my desktop computer.

Like, it is impossible to align taskbar to the left. You are stuck with only bottom alignment. On super ultrawide monitor it takes too much space from the actual things I want to see.

Also right-mouse context-menu is overly simplified. If you want to extract zip into folder, your first option in the menu is build-in windows extract. However if you want to use 7-zip, you need to click show more to see the old style menu with 7-zip. So extra clicks here and there.
0

lopri said:
W11 is an advertising platform for MS.
Click to expand...

myl said:
You are stuck with only bottom alignment.
Click to expand...

You can hack the registry and move the position but, it's not as visually or functionally the same as w10. But there's a program you can download that allows functionality like w10.
0

Tech Junky said:
You can hack the registry and move the position but, it's not as visually or functionally the same as w10. But there's a program you can download that allows functionality like w10.
Click to expand...

Yes, you can modify registers to set the position. It shows the toolbar visually correctly, but it doesn't function correctly or nearly at all.
0
T 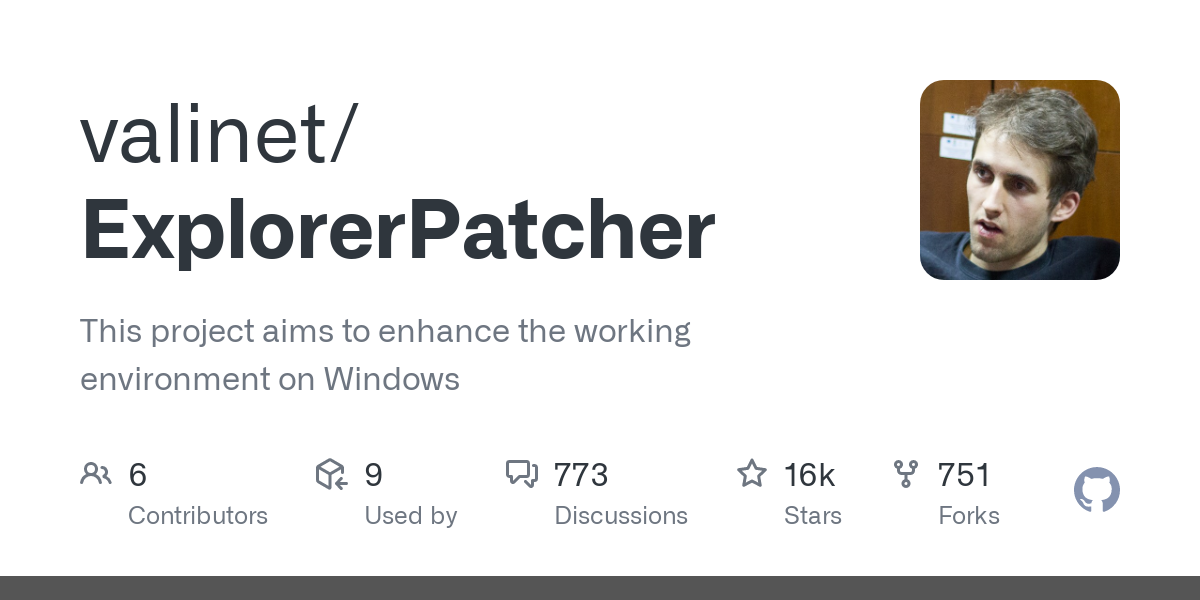 GitHub - valinet/ExplorerPatcher: This project aims to enhance the working environment on Windows

This fixes the crap that W11 doesn't do.
Reactions: igor_kavinski and myl
0

I'm fairly certain all W11 perf problems have been solved so that should no longer be an issue. The real issue is W11 usability. W11 does bring quite a bit of improvement over W10, for example file explorer finally has tabs, docking windows to sides of the screen has been greatly improved, it's easier to manage wifi/bluetooth/notifications. New context menu is a mixed bag, I actually find it better than W10, but the problem is that developers need to modify their apps to support it, that's not really on Microsoft, it's on individual app developers. Eventually all apps will start supporting new context menu, although it might take a while, 7zip developer outright said he doesn't care since he's still using W10, so that one will definitely take a while.... But as lots of people have said there are also a lot of negatives in W11, unable dock taskbar on the left side of the screen is a huge negative for me, unable to disable app grouping is also cons, the W11 start menu is a huge step back in usability as well. I have installed W11 on my new laptop to try out, it's fine on my laptop, but I'll stick with W10 on my primary desktop for now, maybe by 2025 Microsoft will fix outstanding W11 issues.
You must log in or register to reply here.
Share:
Facebook Twitter Reddit Tumblr WhatsApp Email Link