From what I understand, Kabby Lake chips are supposed to be faster and more efficient than those from older microarchitectures, so I guess that should make the MacBook better than the Air? Then again, Core M processors are designed for mobile or ultra-thin devices which typically have less processing power, I think?

I wonder which one is actually better, especially when multitasking or using more resource-demanding programs? Will there be a significant difference between the two?

However, the m3 also has some hardware decode support that the Air's Broadwell i5 doesn't have. That means if say you wanted to play 10-bit 4K HEVC, the m3 can do it easily and the Air can't do it at all. On the m3 it will be smooth as butter, and on the Air it will be stuttery mess.

So overall, I'd say the m3 is the superior chip, with the only caveat is that it can lose speed as the machine heats up because it has no fan. That said, In my Cinebench testing, the m3 only lost about 4-5% performance over 25 minutes of full load. My testing consisted of running Cinebench repeatedly and recording the score achieved with each run. The first run was 264, and after 10 runs (~25 mins) it was down to 253. 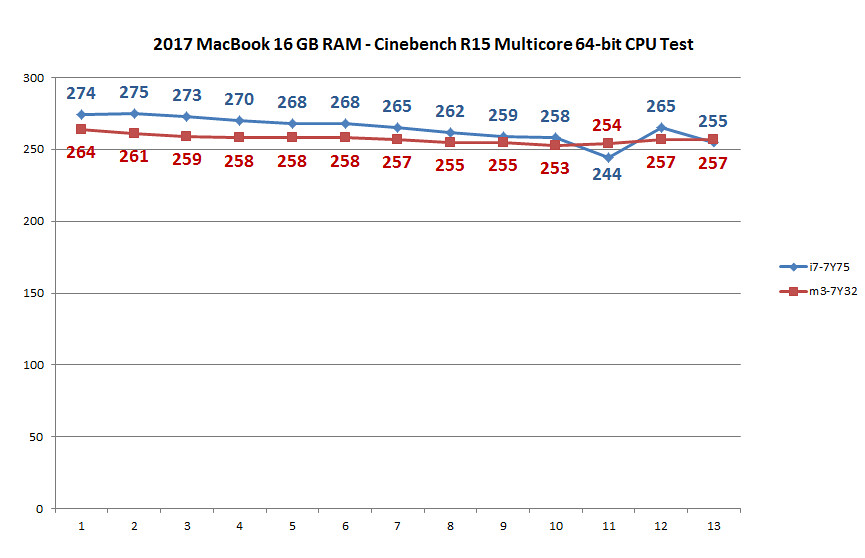 Above are the scores for my m3 and someone else's i7. Note that only the first 10 runs are valid. In run 11, I had moved the MacBook m3 to a different spot on the counter, and the performance increased, presumably because that part of the table was cooler. For the MacBook i7, the person got a phone call in run 11 so the performance that run dropped significantly.