What are YOU growing in your gardens?!?!?

Harvested these this morning and will be having zucchini lasagna with pickled radish for lunch today.
Reactions: bbhaag

Harvested these this morning and will be having zucchini lasagna with pickled radish for lunch today.
Click to expand...

OMG! I'm so sorry...no one should be forced to eat such a thing.
K

BoomerD said:
OMG! I'm so sorry...no one should be forced to eat such a thing.
Click to expand...

It's delicious! I prefer it over lasagna made with traditional pasta. I guess zucchini is one of those vegetables that you either love or hate.

Only have a balcony to work with that has a small part that might qualify as full sun. For herbs/vegetables:

kt said:
That's no garden, that's a small farm you got there!
Click to expand...

Haha oh god you have no idea. We bought this property two years ago then the second part last fall and my wife has been going NON-STOP. In the tour I didn't even show half of what her and I have planted aver the past two years.

It's been hella fun but man it's A LOT of work. We enjoy doing it together so I guess it's a fun hobby that her and I can share.

Just harvested some more produce this morning before it got too hot outside. More beans, snow peas, onions, kohlrabi, cucumber, turnips(YUM!), a couple jalapenos, zucchini, and a lone Early Girl tomato.

Right now we are blanching the beans to prep them for the freezer. So far this year turnips are the surprise hit for us. We have never grown them before and man are they good! 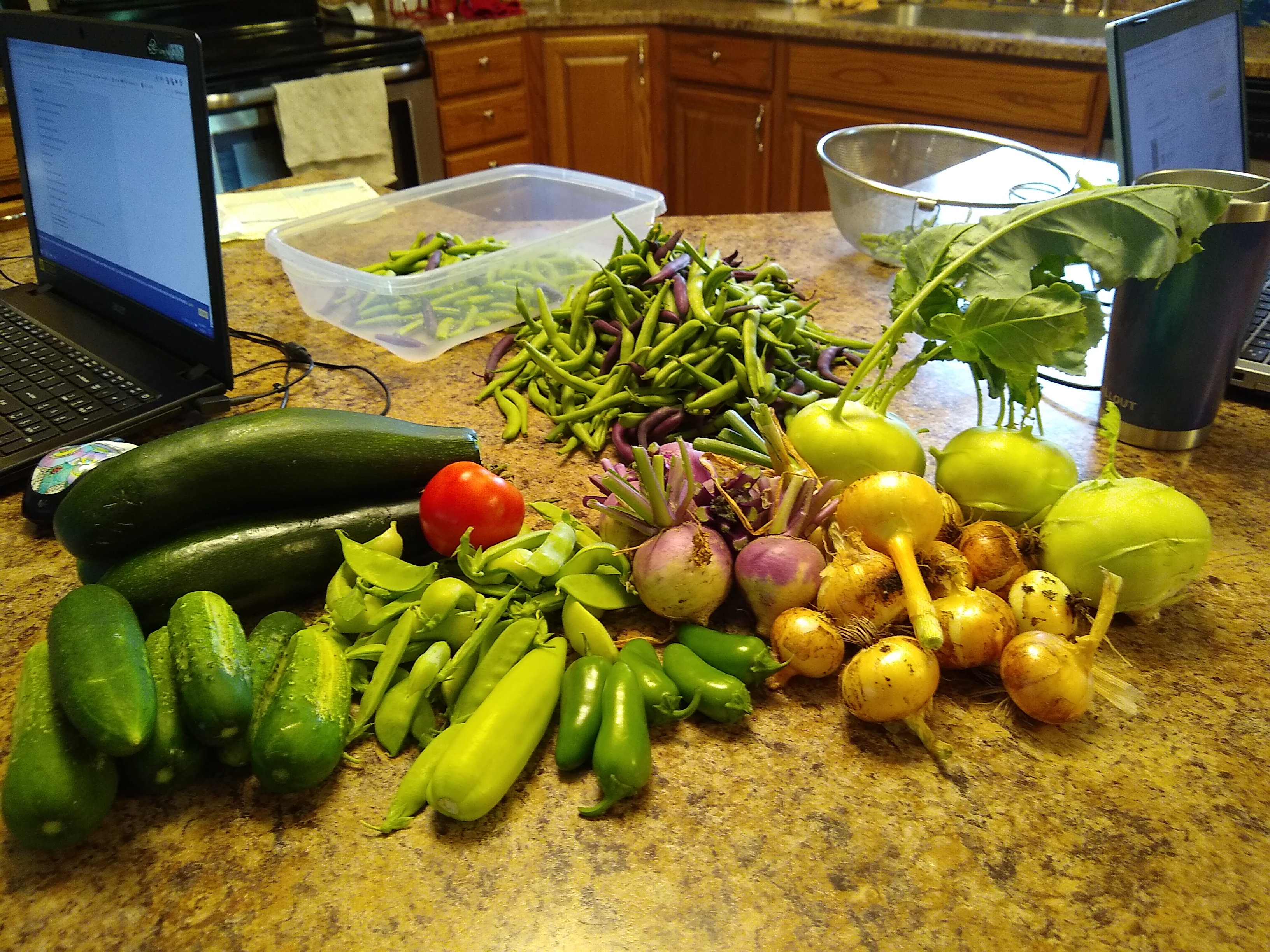 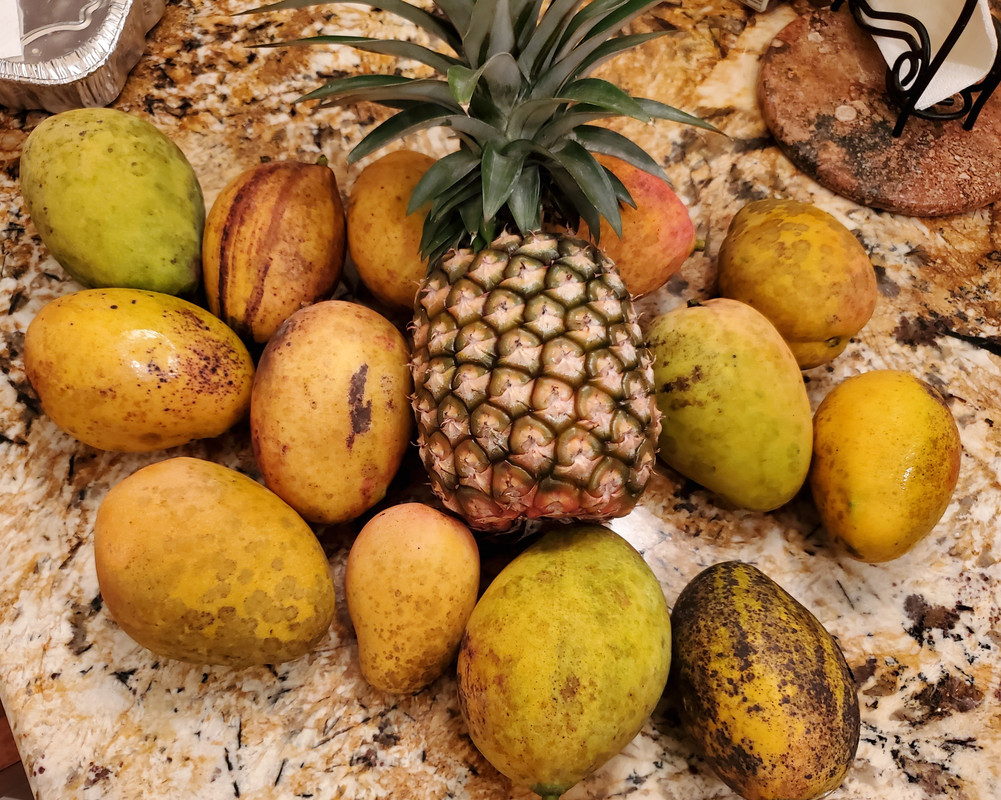 I built the raised bed boxes and have been some of the occasional labor with cow panels, etc..but my wife's done most of the work. We've got maybe 15 raised beds with many flower and tomato varieties, basil, sugar snap peas, cantaloupe, carrots, strawberries, zucchini, summer squash, and we've got 4, 30ft rows of beans on another property we own. She did new potatoes in some containers and we've already harvested those and the carrots. Tomatoes are just now turning.

She raised most of the plants from seed and started them in our dining room with grow lights. Big operation.

Well it's prime time for harvest here in Central Illinois. So far this year has been a mixed bag for us. The peppers, beans, and vining crops did great, but the tomatoes, cool weather crops, and sweet corn performed poorly. All in all though we can't complain to much as we did pick some really good produce so far this season and more is still coming on strong especially the bell peppers.

Anyway, how is everyone else faring this season? Is your garden performing as expected for everyone or was this year a bust?

Here's a harvest pic from two days ago. This was about half of it the rest went into the fridge and we are processing it today. 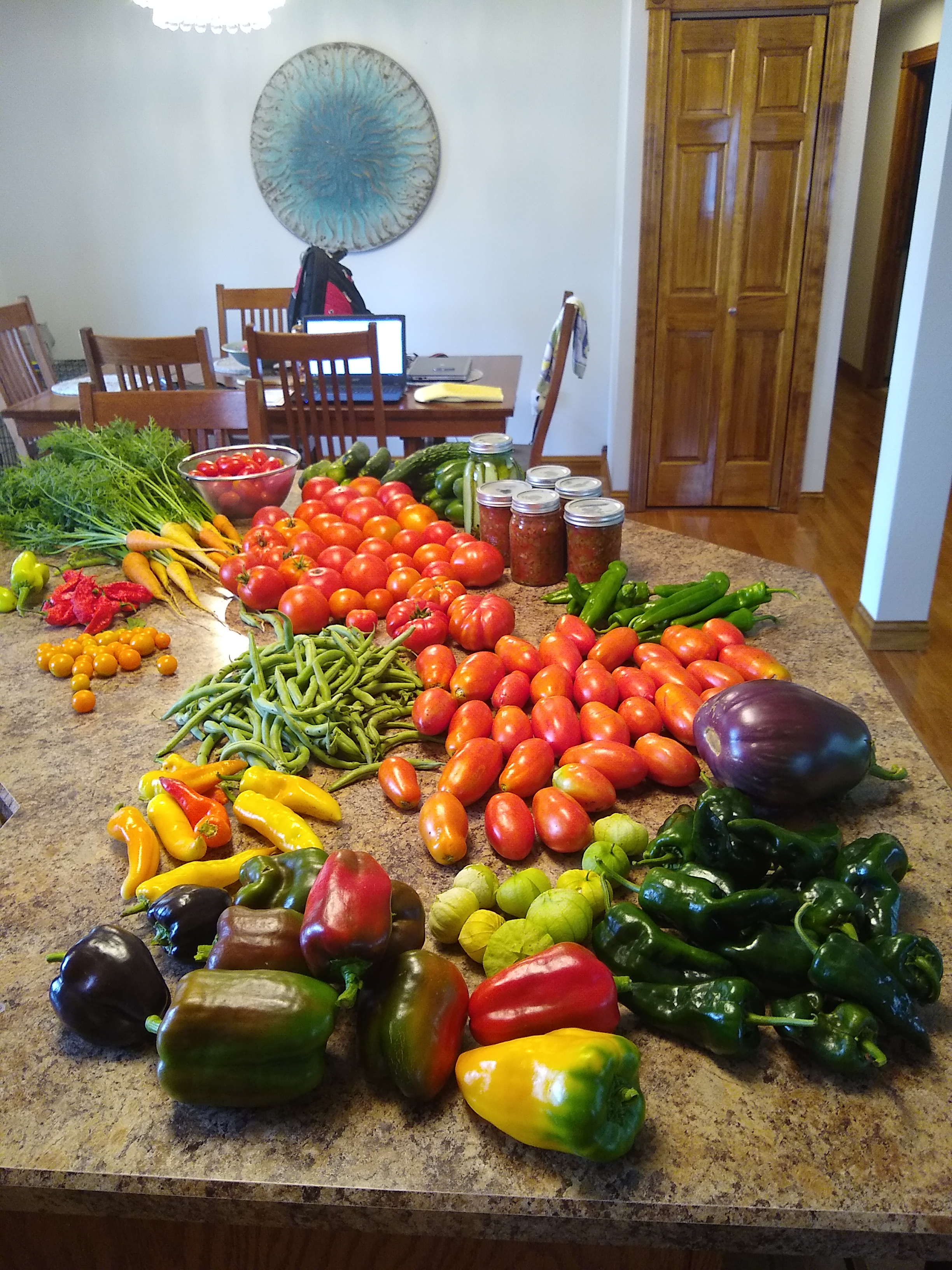 Yep they were pretty hot. I shit you not it felt like my insides were on fire. We also have some Carolina Reapers that aren't ripe yet......I'm not sure if I have what it takes to try them. haha

Wish I lived nearer to you, @bbhaag, I'd buy some of those hot peppers off of you. I LOVE hot peppers.

Gosh. Beautiful vegetables, guys! I've never grown anything. How hard is it?

VirtualLarry said:
Wish I lived nearer to you, @bbhaag, I'd buy some of those hot peppers off of you. I LOVE hot peppers.

Haha I wish you lived closer to me. I would give you hot peppers and whatever else you wanted for free.

Yep those are tomatillos good eye! We make salsa verde for enchiladas, mole, stuffed peppers, or just eating fresh on chips. Here's a pic of some we made today the cantaloupe is from the garden to. 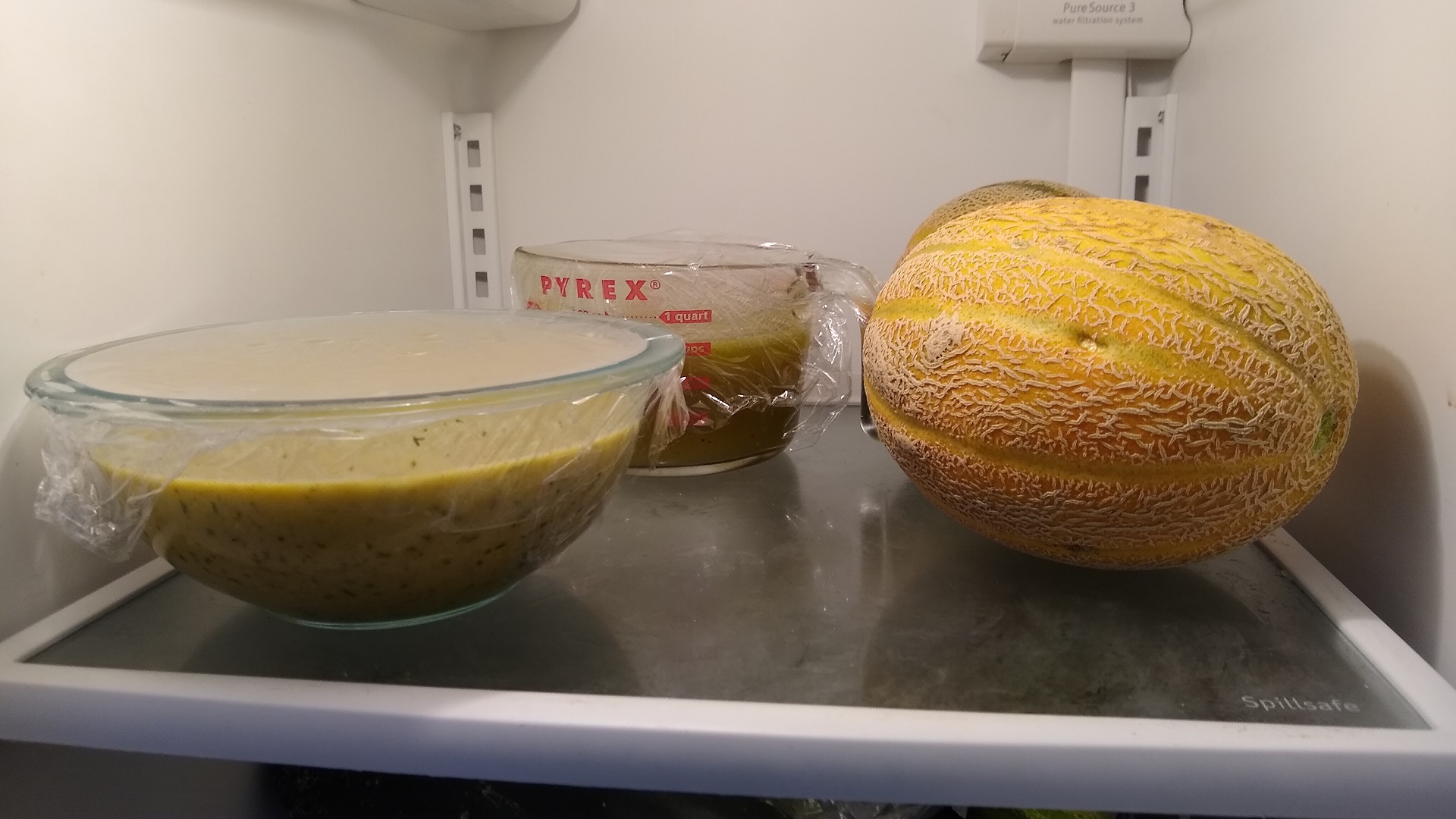 A/// said:
Gosh. Beautiful vegetables, guys! I've never grown anything. How hard is it?
Click to expand...

Not very hard. Some easier than others. I used to buy seed packets but haven't for many years. I plant really small tomato seedlings bought from nursery or Home Depot around beginning of March, or whenever they have them... varies by the weather. I have been planting seeds from last year's kabocha squash harvest, but this year didn't but let the volunteers grow. As a result I have far fewer kabochas but the ones I have are relatively huge. I'm talking 10+ pounders, 2 or 3 and several barely smaller. Whereas I'd get 55-90 kabochas, this year I have less than 20 for sure.

Growing veges (fruits too) is fun.

When I started I got a largish (but not thick) paperback book on growing your own vegetables, I believe it was by Sunset Books. I still have that. It had like a page on each vege, and they were arranged in accordance with logical grouping. Like cole crops together, onion family together, herbs together, etc. I have several other books on growing vegetables.

The last 3 weeks I have canned a fair amount. I just today labeled around 20 jars of what I call "Two plum sauce." It's equal weight of the plums from my two very different plum trees with 3/4lb sugar added for each pound of plums. Of course, wash plums and remove pits before adding to large pot and turning on the flame and bringing to slow simmer, while intermittently stirring. I take a potato masher and mash the floating pieces of fruit for 2-3 minutes, then remove clean jars one by one from a separate covered kettle with tongs where they have been getting steamed by boiling water. Screw on the lid, turn the jar upside down for a minute or two to make sure any and all fungus spores are dead (that happens around 160F), let cool, label and store. Very delicious. If I want 2 plum jam, I just simmer long enough so when cool it will have a nice jam-like consistency. This sauce is runnier, though. Both are exceptionally delicious.

I have a large heavy plastic-like glove I keep on my left hand while doing this so I can grip a hot jar. I use a professional style stainless steel soup ladle and large funnel with relatively large opening to get the stuff into jars without making a mess and keeping the outside and rims of the jars clean.

I made around the same amount of tomato hot sauce the last 3 weeks. Picked my home grown, vine ripened tomatoes, washed, removed stems and cut in pieces and placed in large pot. Then diced jalapeno peppers, 1 pound of peppers for every 10 pounds tomatoes. Added some salt and pepper. Did the same action with potato masher as for the plum sauce, bringing to slow simmer. At last minute, before canning, add 1/2 teaspoon citric acid per quart to assure sufficient acidity to it won't spoil. I never used to do this but it's recommended in case the tomatoes aren't acidic enough to ward off botulism, something you want to avoid! I made about 20 jars of hot sauce, averaging 16-20 ounces/jar.

All this canned stuff lasts for years and years! I have plum jam I made 20 years ago. I'm sure it's as good today as it was in 2000. All my tomato canned stuff seems to last indefinitely as well (Italian sauces, hot sauce, a mixture with celery etc. off Minnesota University Extension website, one or two others).
Last edited: Aug 24, 2020
Reactions: VirtualLarry
O

BoomerD said:
.... Tomatoes in the greenhouse are doing pretty well, but I haven't been able to entice any bees to go in...
Click to expand...

Never thought about this.
I am retiring this year and hope to have a greenhouse next year to at least grow everything I need for salsa. And some avocados.

BoomerD said:
We planted some radishes, but they're going S-L-O-W...
Carrots are just starting to break through...ane it's been at least 3 weeks. (We'vehad lots of cool weather)
Blueberries are doing well enough. Transplanted them about a month ago. Tomatoes in the greenhouse are doing pretty well, but I haven't been able to entice any bees to go in...so I guess I'm gonna have to pollinate with a brush.

A neighbor gave me some brussels sprouts starts. They're doing ok, but I THINK, it's teally the wrong time of year for them...we'll see.
Click to expand...

Tomatoes are wind pollinated, no bees necessary. You might want to have a fan in there to simulate wind, if your tomatoes aren't setting. I use a setting solution I bought decades ago when night time temperatures go much below 55F, because tomatoes will drop their blooms (i.e. not set) in those conditions, so they tell me. I use a brush on the open blossoms, even unopened ones, do this for a few weeks until night time temperatures don't drop so much.

I do use a brush to distribute pollen on my squash plants until the bees discover them. They typically don't show up for several weeks after squash blossoms are showing up, so I have to do the bees' work for a while. This year they showed up earlier, however.

bbhaag said:
Well it's prime time for harvest here in Central Illinois. So far this year has been a mixed bag for us. The peppers, beans, and vining crops did great, but the tomatoes, cool weather crops, and sweet corn performed poorly. All in all though we can't complain to much as we did pick some really good produce so far this season and more is still coming on strong especially the bell peppers.

Anyway, how is everyone else faring this season? Is your garden performing as expected for everyone or was this year a bust?

Here's a harvest pic from two days ago. This was about half of it the rest went into the fridge and we are processing it today.

Spring was really good with lettuce and peas, berries, herbs, but I don't bother with too many brassicas as it's just too many bugs and work to be worth it.

Been picking beans for over a month. Mostly pole beans, Kentucky wonders and Violettas, but I have some bush varieties as well. These will keep going for a while.

Picked over 20lbs of pickling cukes from two vines. Actually happy they got wilt and died back.

Late frost torched most of the tomatoes I had, then pandemic had everyone buying plants, so few plants left to replace them with, but I was able to start quite a few vines from planting suckers. Getting quite a haul of romas and heirlooms atm. That trick worked out well.

Okra has finally taken off. It's a hot weather plant, so took a while, but booming.

F'ing vine borers killed all my squashes. Pretty much had given up on these bc of this, but had some extra seeds and space, so gave it a go again this year.
None of these home remedies stop them from getting in. Even skipped a year. Got a few fruit before plants crashed. Prolly last time I plant these which sucks.

My prize tho are my peppers, particularly my NM peppers. Planted a bunch of hatches, big jims, other varieties, as well as poblanos. Roasted a bunch to freeze.

Did babynuts get banned? I haven't had anyone send any blatantly homophobic insults my way in a while.

Looks like this season is coming to a close at least here in Central Illinois. We harvested the last of the tomatoes, melons, and pumpkins the one thing that seems to keep going strong is the peppers.....holy shit sooooo many peppers it's CRAZY!

So how did everyone else fair this year? I personally feel it was a lack luster season for veggie gardens but maybe you faired better. Post up some pics if you have them! 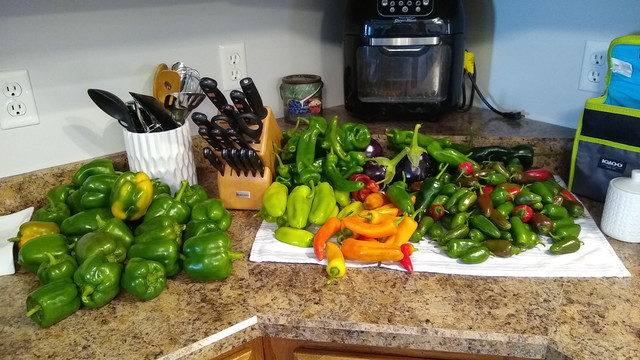 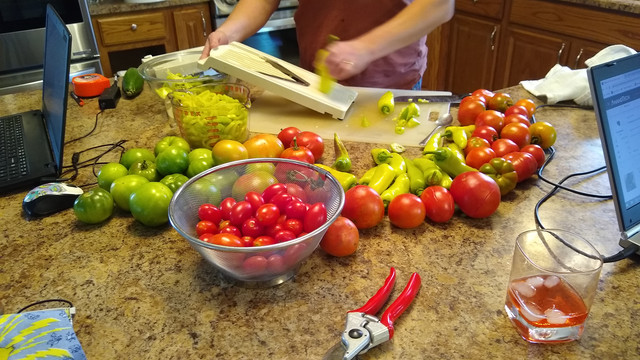 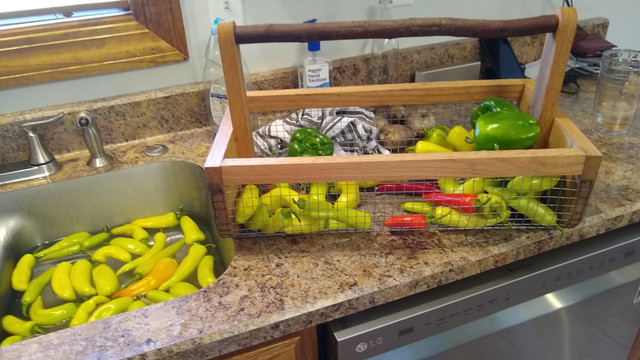