Question Want to improve my CPU cooling, so what is more effective?

I currently own a Ryzen 5800x that is cooled by a Noctua U12A. My case is a Meshify C that I replaced the stock fans with Cooler Master Silent 120mm fans and added one more 120mm intake fan, so not I have 2 120mm intake fans in the front and 1 rear 120mm exhaust fan and my CPU now runs a little cooler, at a fixed all-core 4.6GHz at 1.25V my 5800x is now hitting 80C in Cinebench R20, whereas before I replaced the stock fans + added one more intake it was hitting 85C at the same CPU settings. Also at CPU stock settings, I seem to be getting slightly better boosts as my Cinebench multicore score slightly improved, but it's still within the margin or error range, since it's like a 1% improvement, but most of the time that 1% improvement is consistent each time I"m running Cinebench R20. However, I'm still not satisfied with my CPU temperatures at stock settings as it hits 90C within 25 seconds of running Cinebench R20 multicore whereas before the case fan replacement + additional intake fan it was hitting 90C within 10 seconds. I'm looking for even better improved CPU cooling and I was thinking about replacing the 2 Cooler Master 120mm intake fans with 2 Arctic 140mm PWM fans and replacing the rear Cooler Master 120mm exhaust fan with an Arctic 120mm PWM fan. I was also consider just replacing my case with one that has vents in the front or front-sides. I also considered replacing my Noctua U12A with a Cooler Master 240mm AIO (don't want an AIO that needs software installed to run) and top mounting it but I read reviews that showed that the Noctua U12A has about the same cooling performance of some 240mm AIO's and the only way I can install a 280mm or larger AIO is if I install it in the front but I heard that doing it this way causes more heat to come into the case that top mounting it as exhaust because of the radiatior emitting hot air into the case if it's mounted in the front as intake. Am I better off with a top mounted 240mm AIO as exhaust than a front mounted 280mm AIO as intake? So what is best for improving CPU cooling to what I have now?
0
T

I use one of these on my 12700K https://www.amazon.com/gp/product/B09FDXJV3M/ @ $50 it's standing up well to the CPU. I use a graphite pad between the CPU / cooler and it's holding at room temp when idle and might hit 130F under load before all of the fans kick up. I'm using the Meshify 2 w/ solid panels on the sides.

I put dual fans on the SP tower 120's from Actic with PST to daisy chain them to single fan header.

I use a https://www.amazon.com/dp/B07BY6F8D9?psc=1&ref=ppx_yo2_dt_b_product_details for my 5950x's (well for 2 of them). Its spendy, but works very well. The other heatsink mentioned above looks good, if you are on a budget you may want to try that one first, as it looks good.
Reactions: Drazick and Tech Junky
0
T

I suppose I could show the temps @ idle

Looks about the same as the one I'm using w/ a $30 price difference.

For the most part these things all perform within a couple of degrees under load. If you clamp them down right to the CPU then it's usually just as good as a WC setup w/o the risk of liquid + electricity mixing.

Dave3000 said:
However, I'm still not satisfied with my CPU temperatures at stock settings as it hits 90C within 25 seconds of running Cinebench R20 multicore whereas before the case fan replacement + additional intake fan it was hitting 90C within 10 seconds.
Click to expand... 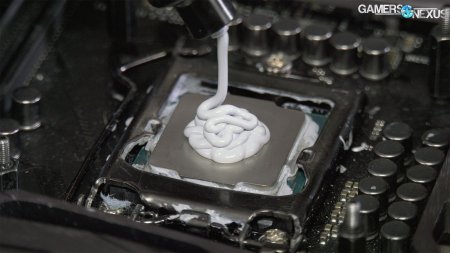 The “correct” method for applying thermal paste is still the subject of arguments, despite plenty of articles with testing and hard numbers to back them up. As we mentioned in our Threadripper paste application comparison, the general consensus for smaller desktop CPUs is that, as long as enough...

Tech Junky said:
Looks about the same as the one I'm using w/ a $30 price difference.

For the most part these things all perform within a couple of degrees under load. If you clamp them down right to the CPU then it's usually just as good as a WC setup w/o the risk of liquid + electricity mixing.

Stock it does 220 TDP and adding the additional fan well...

Tech Junky said:
I didn't even use the fans in the box and used 2 X Arctic PWM PST 120's

Stock it does 220 TDP and adding the additional fan well...

A lot easier to replace a fan than rip out an AIO. Not to mention fans are cheaper to deal with. I can get 5 packs of Arctic's with PWM/PST for $40 and have spare laying around from prior builds / changes. I damaged 1 of them and sent Arctic an e-mail for warranty replacement and had it in the mail within a week.
Reactions: Hotrod2go and Markfw
0
I

Tech Junky said:
I suppose I could show the temps @ idle

I think you might be the only person on the planet that looks at PC temps in degrees F.
Reactions: Magic Carpet, ClockHound, AnitaPeterson and 4 others
0
T

My son just built a new PC with a 5600x and a 240mm AIO in an NZXT H510 flow. With PBO turned on he was seeing temps in the 70C range in cinebech. We then undervolted the CPU using an offset of -25 in BIOS and the temps dropped to the mid 50C range.
0

How hardcore are you willing to go, assuming we stick to only to air and not water? Cuz it can get pretty hardcore.
0
H

I'd be happy with those temps, but what ambient? In any case temps rising significantly in CB is because of AVX code be executed. This is normal, its nothing to worry about. Imo, save your money & avoid investing in AIOs, upgrade case fans & be content with it. Temps your getting in CB match my supposedly & commonly known "hot" running i7-11700k in CB. Which is a direct competitor to your CPU in the market. I've only been able to do that because of taking advantage of MSI's 'cpu lite mode' option in bios, fine tuning that & customising auto vcore to suit the particular quality of silicon in my chip.
0
T

In2Photos said:
I think you might be the only person on the planet that looks at PC temps in degrees F.
Click to expand...

To OP: It's pretty common I believe to see such higher temps with your 5800X, largely in part to how small that compute chiplet is. It's just a lot of heat concentrated into a small amount of area. In terms of least costly to most costly, you should start with re-examining the mounting of the heatsink and application thermal paste, followed by using a better thermal paste, then looking into a better heatsink cooler. I will echo some of the sentiments that others have mentioned in this thread to go with a high end air cooler instead of an AIO. I've personally never been a fan (no pun intended) of AIOs because there's simply more points of potential failure. Meanwhile, like you mentioned, it's so much easier to replace a fan. Noctua's larger heatsinks are very reputable, but there's cheaper alternatives that are just as effective.
Reactions: Drazick
0

If you want to go all-out:

NH-D15s (you only need the one fan, if that)
2-3x Noctua indutrialPPC 3000rpm 140mm fans w/ clip kits for NH-D15/D15s
CLU or TG Conductonaut (I prefer Conductonaut now)
unimpeded pathway from your HSF fans to outside the case, if at all possible

Be prepared for the noise! It's a nifty setup though. Wooooooooooosh.
Reactions: Magic Carpet
0

I am here to see who the guy is posting temps in Fahrenheit instead of Celsius. Alas Tech Junky is a brand new member. I also don't like AIO's. I had the original thermalright Ultra 120. The 120mm air cooler that started it all. Now I almost exclusively you AIO's, mostly because getting at the memory modules with an air cooler is next to impossible without removing them.

I upgraded my AIO to an RGB model. I can customize the colors on the pump to correspond with the temperature on the CPU. Green is below 60C and 61-80C is yellow. Red is 81C and above.
0
T


Said air cooler actually has a fin cutout to ease the removal of RAM while still mounted.

I measure temps in F because well, I'm not in a C region.
0


Said air cooler actually has a fin cutout to ease the removal of RAM while still mounted.

I measure temps in F because well, I'm not in a C region.
Click to expand...

Neither am I. I drink half gallon jugs of milk and gallons of milk. But I drink two liters of soda. If your screws are made in a millimeter region (metric) you buy metric tools. Both AMD and Intel use Celsius to measure the max temps before shutoff of their CPU's. I think that is why we use C to measure temps.

Always a fun time to go through the completed builds on PCP for specific components to see how creative people get with things. In similar fashion peopleofwalmart is entertaining as well.
0

Maybe I am getting old but is it really worth improving the cooling over what you have? I can't imagine the difference would be huge. Much easier and more cost effective to lower the clock slightly, lower the volts and greatly lower temps.
0

If the CPU is throttling to stay cool which it will do at 100c, then yes a better cooler may help performance depending on how much the cpu is throttling. A new cooler may be a good idea even if the cpu is not throttling, I would not be comfortable letting my Computer hit 90c while gaming.
Last edited: Feb 2, 2022
0

Unlike Zen2 CPUs AMD rather aggressively clocked single chiplet Zen3. 5800x has same PPT as 5950x, a chip with twice the cores, which makes it difficult to cool. One could reduce PPT in BIOS to a more reasonable level and let AMD power management do its thing, or one could get a better cooler which would keep the noise levels down.

To be honest, if you search the web, plenty of people successfully reduced 5800x PPT to 120-125W without losing a single performance iota.
https://www.reddit.com/r/Amd/comments/kfpele https://www.reddit.com/r/Amd/comments/kgiq1y
I would do that first before considering new cooler.
Reactions: scannall, IEC and AnitaPeterson
You must log in or register to reply here.
Share:
Facebook Twitter Reddit Tumblr WhatsApp Email Link