US income levels fall to 1989 levels (inflation adjusted)...2+ decades down.

Economists haven't reached a consensus about what forces have caused the middle-class stagnation, but they have pointed to some that may be involved to varying degrees:

Globalization: The rest of the world is playing catchup to the nation that came to dominate in technology and sheer productive muscle during the 20th century. In theory, the US can still prosper as emerging nations from China to Brazil rise, but recent years have seen fierce global competition. America needs to boost its skills faster to stay in the game.

Technology: As with globalization, in theory this isn't a job-destroying force, just one that causes the nature of jobs to change. But some argue that rapid technological advances are having an especially hard impact on many middle-wage jobs that can be largely automated.

Inequality: A wage premium for the educated, the decline of labor unions, and the failure of the minimum wage to keep up with inflation have been among the factors widening the income gap between the rich and the middle class or poor. Some economists say that gap makes for a less vibrant nation. "Lack of opportunity means that its most valuable asset -- its people -- is not being fully used," Joseph Stiglitz of Columbia University has argued. When the rich are able to win big tax cuts it "leads to underinvestment in infrastructure, education and technology, impeding the engines of growth."

Debt and government: Another line of reasoning, taken by some conservative economists, is that economic growth is slowing as America becomes more of a European-style welfare state, with more people receiving public services and government spending accounting for a larger share of the economy. Some say the rising level of public debt, in particular, is emerging as an obstacle to be reckoned with. Others cite high levels of regulation and "crony capitalism," in which government policies favor some industries or companies at the expense of others.
Click to expand...

Keep tearing out the middle class foundation and the building will fall. Government is failing miserably trying to plug the gaping credit and wage hole with spending but it's not much help and the "job creators" are creating them in other areas. I suppose they, the job creators, think that American labor isn't worth investing in, other than a credit card nugget to get them to buy the imported items. The only way to get this economy going is to get middle class jobs and increasing wages....period.

Ross Perot was right except this is much bigger than a NAFTA issue. OH, I forgot....we are going to a great service economy and it will thrive soon enough.

I once read that there are 7 steps to every empire and they all died the same way. Step #6 (before death at #7) was relying on the slave labor or nearby and conquered lands for your good and services. Thank you China and "job creators"...I'll have another (while bending over grabbing my ankles). :roll:
Last edited: Sep 12, 2012
G

This ties in very well with the video posted here:
http://forums.anandtech.com/showthread.php?t=2270105
It is bigger than NAFTA and Goldsmith breaks down exactly why this is happening.

No secret it's happening while the rich accelerate away. I think the root cause is outsourcing of labor and production. Those not riding the front of the wave will continue to drown it as their 20 hour job is only 3 hour in Mexico or china. Both parties will continue to lie to the middle class about this for as long as they can, pretending that everything is fine and peeps just need to pick themselves up by the bootstraps and quit complaining.
O

Mine has been inflated to levels that were unheard of in 1989....mostly because I was 5 years old.

Warren Buffett was quoted in the Associated Press (January 20, 2006) as saying "The U.S trade deficit is a bigger threat to the domestic economy than either the federal budget deficit or consumer debt
Click to expand...

We can raise minimum wage all you want, tax the shit out of the rich and have all the regulations in the world, but when we send nearly $1 Trillion overseas, we are still going to have problems. Those $10 Chinese disposable appliances are costing us a hell of a lot more than we realize. We started running trade deficits in the late 60&#8217;s and look what happened to wages in 1970: 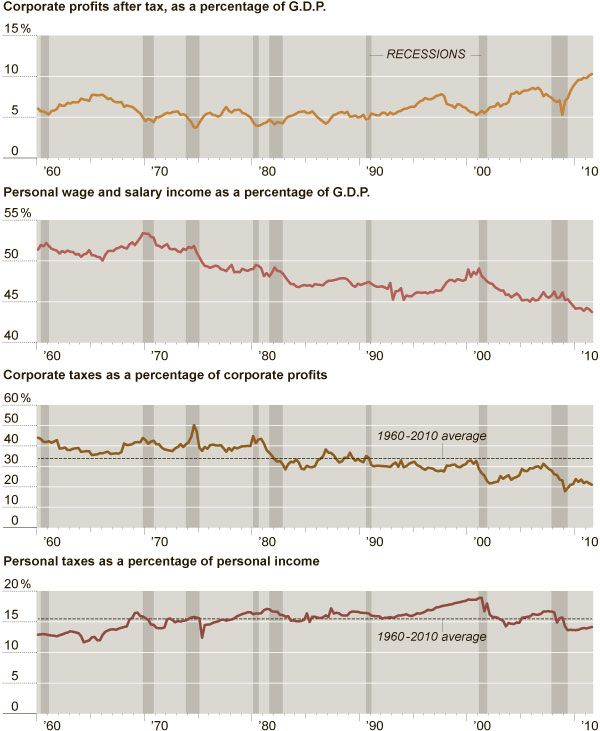 Those charts indicate that as corporate tax rates dipped, personal wage and salary income also dipped while corporate profits soared. Would you be in favor of raising taxes on corporations?
G

We can raise minimum wage all you want, tax the shit out of the rich and have all the regulations in the world, but when we send nearly $1 Trillion overseas, we are still going to have problems. Those $10 Chinese disposable appliances are costing us a hell of a lot more than we realize. We started running trade deficits in the late 60s and look what happened to wages in 1970:

remember the light that shines half as bright; shines half as long also- confusion says!
What happened to the country that put a man on the moon? Glad he died before he saw it implode under it's own greed and sleeze.............. god speed, ol' friend!
United hardly!

The #1 reason is globalization combined with companies trying to squeeze a little more profit no matter the cost. Free trade agreements were a horrible idea and still are.

No such thing as free trade where the competition gets subsidies from their governments like chinese business not paying electricity and the like.
A

Dulanic said:
The #1 reason is globalization combined with companies trying to squeeze a little more profit no matter the cost. Free trade agreements were a horrible idea and still are.
Click to expand...

I'm not sure free trade agreements themselves are bad, just who you choose to enter them with.

If they are with countries where the labour force is a relatively level playing field (US, Canada, Japan, Aus, Europe) then it's okay. Trading with one of those places means you're exploiting specialized skills/innovation.

The problem is when the 'specialized skill' is just exceedingly cheap labour. Raise the minimum wage in China to that of the US and you'll see the trade deficit disappear. You'll also see prices go way up, but at least we won't be mortgaging our kids' future.

The top 1% makes more money than they did in 1989 adjsuted for inflation.

There are reasons for it though. Head of a company has 100 customers in 1989. Due to population growth and increasing world trade, he may now have 200 customers. All while maintaining the same profit margins. So, the rich get richer in this scenario.
S

I blame the stock market and globilzation.