Evangelical Christians had already whored themselves out to the golden calf called Trump. We already know what's left of their integrity wallows in the pool of hypocrisy. Now they are selling out what's left of their beliefs by advocating for abortion. For the record, miscarriages are spontaneous abortions. I guess the only reasons evangelicals/conservatives have left for supporting Trump are unqualified conservative judges, hating on people of color and tax cuts for the rich.

BTW - What in the hell is a satanic pregnancy? If the woman is on all fours while having sex? 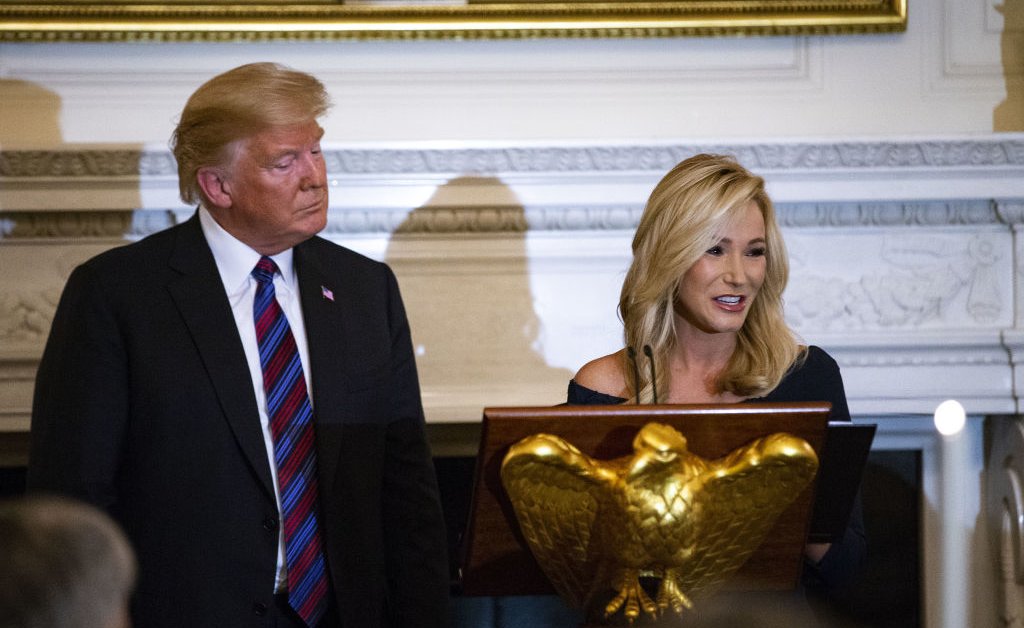 White said her words had been “taken out of context”

what would be in context?
B

She is just another mega church prosperity gospel con artist. The kind of Christian Trump would go for. Check out the Wikipedia page on her. She has made several very unorthodox claims about scripture and it’s meaning over the years.
Reactions: DarthKyrie and Ajay

I saw this a couple days ago, all around hideous ideology that many of my country men and women buy I to, unfortunately.

Satanic pregnancy? Who effin knows, any of them she disagrees with. Aka, not brought about by a christian couple in the missionary position.

Maybe a satanic pregnancy is a white woman knocked up by a black man. That would fit the evangelical/conservative profile
Reactions: whm1974, DarthKyrie, tweaker2 and 1 other person

It's whatever she wants it to mean, of course.

What's a more interesting notion is how one can command a miscarriage. Obviously abortion is evil and all those who participate in it are murderers, but the word miscarriage commonly means that the foetus died of natural causes. 'Natural causes' in turn tends to mean (to a believer as) an act or will of God, so therefore her 'commanding' such an act strongly implies either that she believes she is God or that she can command God to do her bidding (with a further implication that she feels that she deserves such power), in this case terminate pregnancies, but obviously not in an evil abortion kind of way, more like a nemesis.
Reactions: whm1974, DarthKyrie and dank69

Also, dollars to donuts this lady has had more scrapings than a fisherman's knuckles.
Reactions: whm1974, DarthKyrie, HomerJS and 4 others

dawp said:
what would be in context?
Click to expand...

It's all very Trumpian. Her words aren't her words. And if she did mean that, it's ok because reasons.
Reactions: DarthKyrie, Meghan54 and dank69

Yes, so now according to evangelicals, abortion is OK as long as you pray to Jesus (or, supposedly: Satan) to make it happen.

Prosperity crook preying on dumb people, 'advising' the most antithetical figure possible. Funny stuff. This is the one who Omarosa said was giving Trump sexual favors right? She certainly acts like a whore, I wouldn't be surprised if that was the case.

Just like Pence, Starr, Graham, etc, she is now another example I can use to teach my children about dishonesty, greed and evil posing as patriotism and duty.
Last edited: Jan 28, 2020

Also, dollars to donuts this lady has had more scrapings than a fisherman's knuckles.
Click to expand...

Anyone know who her husband is?

No, I will keep it about the music and not let "this" ruin my liking for the band.

compuwiz1 said:
Anyone know who her husband is?

No, I will keep it about the music and not let "this" ruin my liking for the band.
Click to expand...

Satanic Pregnancy is totally going to be a band name if it isn't already one.
Reactions: whm1974, Vic, DarthKyrie and 3 others
O

Also, dollars to donuts this lady has had more scrapings than a fisherman's knuckles.
Click to expand...


She has the whitest teeth i have ever came across...
Reactions: DarthKyrie and Meghan54
V

She's probably aiming to set up a corporation that franchises "Jesus abortion clinics - only satanic babies aborted". It's all about the money, after all.

Such a clinic could claim to have identified a gayness gene that can be tested for prenatally. Offer this test cheaply, report a high positive rate (just to be on the safe side), charge significantly for an abortion. If anyone asks if there really is a gayness gene and how the clinic tests for it, the clinic then claims protection for their business practices on the basis of religion.

I think if Trump ordered his evangelical followers to have a tracking chip implanted under their skin, right next to a tattoo of the numbers "666", A vast majority of them would rush right out and do as he commanded. They'd probably consider it an act of rebellion against fake-news and as a trigger for liberals, especially if the tattoo is clearly visible, like across their foreheads.
Reactions: DarthKyrie
I

Certainly there are several mega church Evangelical leaders who have been badly corrupt. Unfortunately, they're getting success because ordinary people are falling victim to their proselytizing with corrupt intent. Recognizing the fault in these beliefs and the need to challenge those who abuse them for profit leaves us with a large group of everyday people who get alienated in the process. I'd wager such rejection just makes them cling more to the community they have adopted. Sadly, this makes politicians should they be well meaning and realistic dance through hoops to not antagonize at a minimum the evangelical voters and leaders. And then we get those politicians whose intent is personal gain just amplifying their voice and the abuse of those they profess to represent.

She is hardly a spiritual advisor! She is in this for her and her alone! In fact I would call her a spiritual heretic!
Reactions: DarthKyrie

HomerJS said:
BTW - What in the hell is a satanic pregnancy? If the woman is on all fours while having sex?
Click to expand...

I see a possible compromise on abortion. Just declare unwanted fetuses "satanic" and then there is no disagreement that they have to go.
Reactions: DarthKyrie

A.A. Attanasio's The Dragon and the Unicorn opens with angels raping a nun and impregnating her with a demon who becomes Merlin. It's a very good book.
C

Don't you have to have a soul to need a spiritual advisor?
Reactions: DarthKyrie

I wish people would stop this over-generalization. I hope you mean the national Evangelical agenda.

That is what is wrong with this world is people like you lump everyone together!
Just like I could say all Republicans are low life scums of the earth! That statement would be grossly inaccurate! There people who are Republicans who do not like or approve of the current state of affairs!! See...
Reactions: pete6032

JEDIYoda said:
That is what is wrong with this world is people like you lump everyone together!
Just like I could say all Republicans are low life scums of the earth! That statement would be grossly inaccurate! There people who are Republicans who do not like or approve of the current state of affairs!! See...
Click to expand...

Just curious, but at the national level, care to name them?

Meghan54 said:
Just curious, but at the national level, care to name them?
Click to expand...

The reason I left that statement open to not include all Republicans is because I am sure there are some!
But I could have said - there are no Republicans who disagree with what is happening who are willing to take a stand!!
You must log in or register to reply here.
Share:
Facebook Twitter Reddit Tumblr WhatsApp Email Link