ecogen said:
Just trying a little positivity for once. Best case realistic scenario is the position staying empty because he can't be bothered to find anyone to fill it.
Click to expand...

I do suspect this is one reason he picked Bolton, that he couldn't find any other candidates that wanted the job.

There is always Putin's long distant American-born(trust me) relative; Vladutin Pimir. I'm pretty sure he is the new National Security Advisor. Fake mustache & glasses, and all.

Were I the Iranians I wouldn’t waste any time inviting Trump to Tehran. Bolton out, Afghan deal in a coma, and Trump is mega thirsty for a foreign policy “win”.

fskimospy said:
I do suspect this is one reason he picked Bolton, that he couldn't find any other candidates that wanted the job.
Click to expand...

That does seem pretty plausible, I bet Bolton is pretty salty that he didn't get to start any wars.
J

Say buh-bye to a war mongering neocon. Or maybe he wasn't enough of a war monger. Maybe Trump will contract it out to Erik Prince. He comes highly recommended by gulf state potentates. Or Ollie North, a gun freak hero. Bibi could reaffirm his American citizenship to take the job. Tom Cotton would be almost the same. The possibilities are endless, the most remote being that Trump could accidentally choose somebody good for America.

Trump should have paid more attention to his instincts that Bolton looked like a loon with that stupid mustache. Clearly a sign of a sick need to draw attention to oneself. Look, a man you can grab by the feet and paint with.
Reactions: tweaker2

Are you not entertained?

Who is gonna fill it? Nunes? Pardon Flynn? Lets get some names .

He's got acting people every where who have no idea what they are doing so why bother with change of tactics?
J

My guess is Martin Shkreli. He would fit in well with this administration.

senseamp said:
Even us liberals have to give credit to Trump here. Even if he is arguably the most corrupt president in US history, he is not the worst by a long shot. He didn't do anything as bad as dropping the ball on 9/11 or starting a disastrous useless war based on complete lies...yet. And it looks like he is keeping neocons on short leash.
Click to expand...

Why should anyone give him credit? Trump hired him.

The stability exuded by this administration is stunning.

The next NSA will come from Fox News or Tom Cotton

Now that the WH has become an adult day care center who knows what will happen next.

I was thinking about who is worse than Bolton (because it will be someone worse). Wohl is perfectly suited for Trump in this role.

Who was that guy they were floating around for DNI earlier? I posted a thread about him... Bolton's former deputy so not sure he'll get the nod, but he seems to have distanced himself from Bolton and become more of a Trump fluffer:

Fred Fleitz...that's his name. He'll be in the running... definitely batshit enough.

It is finally Stephanie's turn at the spotlight.

sdifox said:
It is finally Stephanie's turn at the spotlight.
Click to expand...

My vote is on Nunes or Hannity.

Hires only the best people.
V

This is still what passes for good news these days?. I'm not sorry Bolton is gone, Mr. '5,000 troops to Colombia' is out. Good. But ... was this anything close to a reasoned decision, or just Trump being impetuous? Trump has never made a reasoned decision. Anyone who works for him ought to know by now that he will eventually turn on them.

Trump probably thought he had hired Michael Bolton, and it took him this long to figure out who the guy with the walrus mustache was that kept showing up.

We all knew this day would eventually come after the first day JB was hired.
I knew. I just waited for the circumstances of the departure.
JB has never been mainstream. JB rubs everyone the wrong way, eventually.
I cant understand why Trump would think this alliance would work out in the first place?
Both Trump and JB are pig headed, both are set in their ways and both set in their ideology.
Bottom line is.... Trump only wants people working for him that always agrees with him 100% of the time.
Not too many of the so called professionals within Washington or within any government affiliation are willing to toss aside their years of experience and blindly march to the drum beat of Donald Trump. At some point a conflict will arise. Whether a conflict with Donald Trump himself, or conflict within the soul of that Trump administration employee.
You can bet there will be conflict at some point.
This guy is insane, Donald Trump that is, and who could ever work for him or work with him?
Could you?

Now old JB too can return to the world of reality, relax, take a deep breath, and prepare for his tell-all book.
And we all know there will be many tell-all books. A hell of a lot of tell-all books.
The next day after Donnie is finally out, the books will be flying off the shelf at a book store near YOU!
Frankly.... we all should be writing our own book, HOW I LIVED UNDER THE RULE OF DONALD TRUMP, AND HOW I SURVIVED. 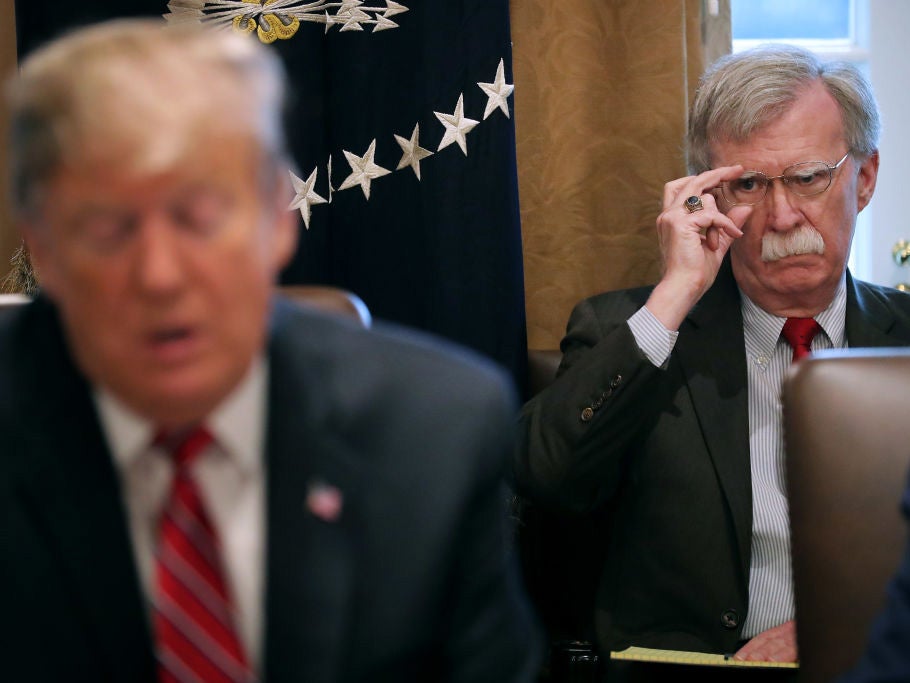 Trump baits John Bolton in front of officials by saying 'you want to nuke them all', report says

‘John has never seen a war he doesn’t like’

According to the report by the Axios website, Mr Trump turned to Mr Bolton in an Oval Office meeting with Irish prime minister Leo Varadkar and said: “John, is Ireland one of those countries you want to invade?”