One of Sony's compiler experts has taken to working on some tuning for the AMD Ryzen "znver1" microarchitecture support within the LLVM compiler stack. This begs the question why Sony is working on Ryzen improvements if not for a future product.

Sony's Simon Pilgrim has been recently investing time in the "znver1" AMD first-generation Zen CPU support within LLVM. Simon has been a programmer for Sony for the past decade. His LinkedIn reveals that indeed at Sony he's working on compiler tooling for the PlayStation devices: 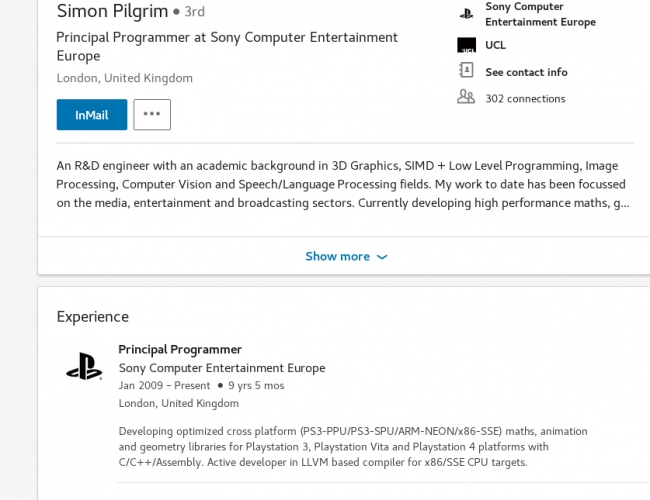 On Friday he submitted a cleanup for the znver1 code, last week were more Znver1 changes across multiple commits, and these upstream Znver1 LLVM improvements by this Sony programmer have been going back at least two weeks with this just not being some one-off cleanup attempt. Thanks to Phoronix reader Stephane for helping to spot this trend.

It's interesting that Sony is working on upstream LLVM improvements specific to AMD Zen processors when they aren't currently shipping any Ryzen/EPYC-based systems. But let's not forget that the PlayStation 4 is powered by a semi-custom AMD Jaguar CPU with GCN Radeon graphics. On top of that, Sony indeed uses LLVM/Clang as the compiler for the PlayStation 4. In fact, they contributed the PS4 support to upstream LLVM and have dealt with the upstream LLVM compiler community over the years.

So for now we're thankful that more hands are working on AMD Zen compiler improvements, but if I had to bet, it wouldn't be too surprising if the PlayStation 5 is powered by a Ryzen CPU/APU given the PS4 being a semi-custom AMD part and that the PlayStation 5 is speculated for debut in the next year or two.
Reactions: DarthKyrie, HutchinsonJC, Campy and 13 others

PlayStation 5 is rumoured to be a custom 8-core Zen-based CPU plus a custom Navi-based GPU, according to SemiAccurate.

https://reviews.llvm.org/p/RKSimon/
Don't take his optimizations as proof that there will be Zen in Playstation 5.

Sony will be doing that, not him.

https://reviews.llvm.org/p/RKSimon/
Don't take his optimizations as proof that there will be Zen in Playstation 5.

Sony will be doing that, not him.
Click to expand...

That looks like a one off. Zen meanwhile appears to be getting quite a bit of attention from him.

The good thing about libre software is that nobody can stop you contributing improvements. Mr Pilgrim seems to like cleaning up code, so why not do just that when running across possibilities to do so elsewhere (he likely looked at how scheduling is already optimized for different platforms).
You must log in or register to reply here.
Share:
Facebook Twitter Reddit Tumblr WhatsApp Email Link