So, this morning I've got this message in my BOINC notice tab.

"I've been asked by several people to post a status update on the situation at Arecibo following hurricane Maria's passage.

Unfortunately, at this point we haven't gotten any news. The last information we have is from a couple hours prior to when the eye passed Arecibo. That report said all the employees were accounted for and in sheltered buildings.

Since then we've had no news. That's understandable. With power out on the whole island, electronics communications aren't going to be possible for some time. Heavy rains are still expected today, so I'm sure that the primary concern is still keeping everyone safe. Assessment of any damage will take time.

Let's hope that everyone is safe, that their homes are intact, and that any damage can be repaired quickly."

This is AreciboObservatory twitter account. There's no update since 2 days ago. Fingers crossed.
Reactions: TennesseeTony and Smoke

Puerto Rico has been devastated. It would not surprise me if Arecibo is out of commission for the foreseeable future.
S

I suppose the main structures of the telescope were engineered for a design hurricane with very low probability of exceedance. But even if no major structural damage happened, a complex plant like this may have lots of subsystems with higher likelihood of damage due to a hurricane.

I think we've got the answer. And it doesn't look good.

Smoke said:
Picture when I visited Arecibo many years ago: https://setiathome.berkeley.edu/view_profile.php?userid=108
Click to expand...

Very interesting photo indeed. Thank you for sharing. I wish someday I can go there as well.

They had a spot on NPR's Science Friday on Arecibo. Forgot who they talked to there but they said its "very well" despite the damage to one of the transmitters antenna. They also said they have been doing testing with some pulsar research.

Off-topic a little, but is that the antenna that was used in a James bond film ? (I forget the exact movie name)

I'm not following 007 franchise, but Wiki confirms that 007 was there.

**My concerns about Arecibo's shut down that we may miss a certain patch on the sky that may emit specific radio signals and because it plays significant part in feeding seti@home tasks, I once suspected that we may have data outage for a while.

Fortunately, seti is working with several radio telescope. And I already notice that guppi data is complimenting data shortage from Arecibo. 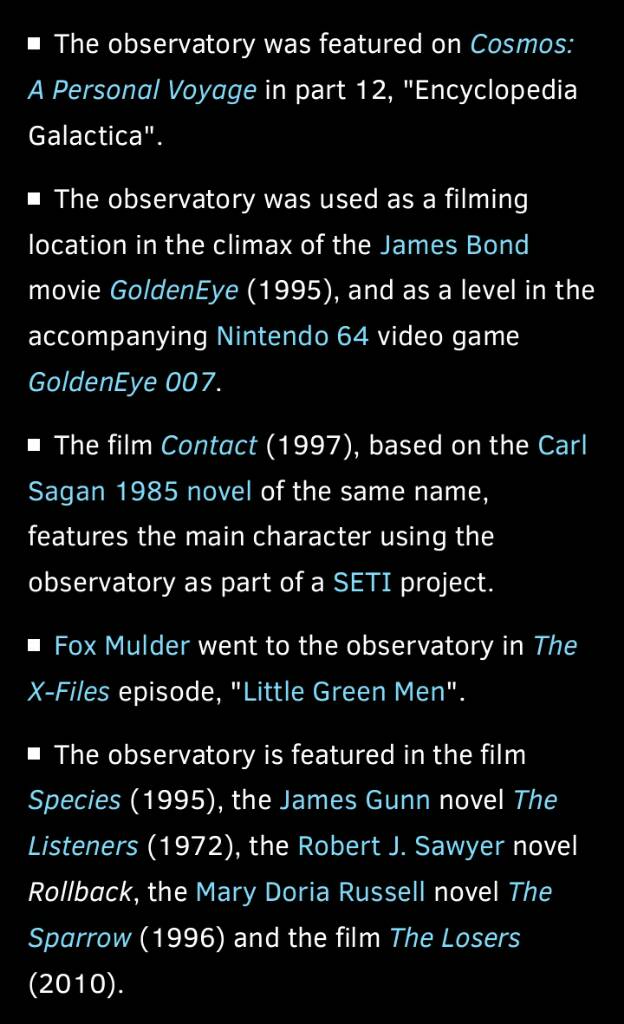 Arecibo Observatory just posted this on their facebook page. I think it also wraps up this thread. Thank you for your attention and happy crunching everyone! 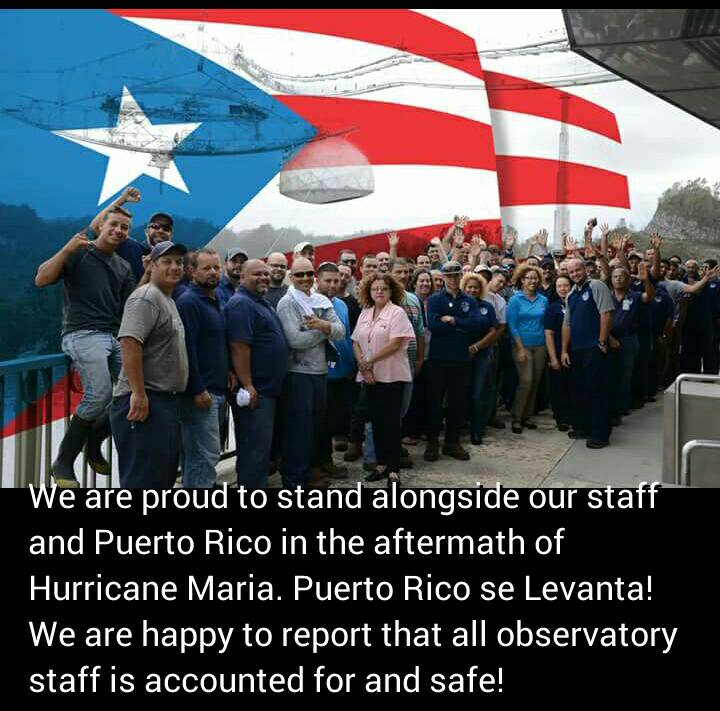 Good to hear all are safe.
W

Good to hear, I was worried.

Even though they already resumed their observation, due to power shortage we'll see limited new tasks from Arecibo for quite a while.

Meanwhile, the observatory itself has been inching back to life. A rudimentary internet connection was restored in late October, taking advantage of public Wi-Fi services—normally the bane of radio telescopes. “Usually I have to police these providers because of frequency interference. Now I had to go to them for help,” Vazquez says.

But “the biggest obstacle to observations” is lack of power, says Nicholas White, senior vice president for science at the Universities Space Research Association in Columbia, Maryland, which helps manage Arecibo. Restoration of grid power may be weeks away. And though the observatory’s generators can support full operation, Schmelz says, “Diesel is in great demand on the island,” and airports and hospitals have priority. As it is, the observatory is burning 3000 liters of diesel a day simply to keep some equipment running, including the vital hydrogen maser frequency standard—recalibrating it after a shutdown could take a month, according to Schmelz.

Researchers have been operating the telescope in a low-power mode called “drift scan,” in which it is left pointing in one direction, allowing the sky to drift past as Earth rotates. But turning on any of the telescope’s radars to study planets and Earth’s upper atmosphere, for example, is ruled out because it would double diesel consumption. Over the past week, with the diesel supply improving, staff have been conducting pointing checks—moving the 900-ton platform that steers the telescope’s focus—in the expectation that enough fuel will soon be available for full operation.

While they cope with the chaos around them, staff are waiting anxiously to hear NSF’s decision on their fate. If no other organization offers to fill the funding gap, prospects look bleak. “Everyone would like to get past this whole process,” White says. “The uncertainty has gone on for a long time.”
Click to expand...

Thanks Rudy! The news calms my anxiousness about Arecibo future. It plays vital role in SETI adventure and I doubt that China will provide the same service with their FAST even if theirs is larger and more sophisticated than Arecibo.
S

I saw a German news item which went into some more detail. According to this, repairs of hurricane damage are estimated to require $ 4...8 M, and NSF will fund these. Going forward, NSF will decrease funding of regular operations considerably (from an already reduced budget of $ 8.2 M/y, gradually stepping down during the next 5 years to $ 2 M/y). Until March 2018 when the current management contract ends, the observatory must find partners which co-finance their operations. Search for those has already been going on for a while; let's hope something workable develops now.

StefanR5R said:
the observatory must find partners which co-finance their operations
Click to expand...

Markfw said:
Off-topic a little, but is that the antenna that was used in a James bond film ? (I forget the exact movie name)
Click to expand...