not that i want to give anyone an advantage over me, but if you want a peppy little chip that'll get you 50K+ a day on GPU only on Milkyway@Home (possibly more in Einstein@Home), check out the 2200/2400G. maybe redundant to mention price on this kind of site, but starts as low as $99 (oh, just realized fewer shader units), and i got the 2400G for $162. and you can game on it quite well for the price!

and the big plus for me is that there's no GPU (and/or GPU fan) to worry about killing. just CPU fan, and i THINK the included one is pretty quiet, even at load. hard to tell over my fairly noisy Lenovo i don't feel like taking apart to replace fan (if it's even possible).

i think that's about all.

oh, and it does ~7,250/day in WCG... not sure if that's good or not
Reactions: GLeeM, zzuupp, TennesseeTony and 3 others

I wish they'd come out with a hexacore APU. That would definitely get my attention. My focus moving forward has to be packing more and/or more efficient hardware, mostly cores, into the same box and similar power consumption footprint. The new APUs are very interesting for budget gaming though, and I want to look into one for my next HTPC.

According to my napkin math, your mw@h task duration is about 6-7 minutes per task and place it twice slower than my RX560. Maybe, if you can find cheaper 3200MHz+ kit in the future, we'll see whether it will improve a lot or not.
But, taking consideration of GPU price madness, 2400G looks very promising for crunching on tight budget.

Btw, are you crunching under TeAm AnandTech? Because I don't see you on our mw@h TeAm's list.

He appears to be an AMD user. Though I guess that's self-evident from his post.
Reactions: ao_ika_red

any ideas how the WCG rates compare?

I don't see any, Ken. Thanks for pointing out.
Now, I've read 2400G results, then I have to correct my first assumption that it's more than twice slower than RX560, but CPU time is much faster than my Athlon 845 (about 50% faster).

yeah, i should probably update my sig. used to be AMD from PII til Core-i first gen. got my second i7 partly due to the distributed computing bug >___> (BURP and WCG)
Last edited: Apr 24, 2018

Thanks for sharing with us plonk420!!! Always good to see some new friends!!

WCG PPD are a bit hard to come by. First of all because the WCG site doesn't publish stats in the way most other boinc sites do, second because PPD depend on subproject and on operating system.

(Regarding OS, some of WCG's current applications perform noticably better on Linux than on Windows. And regarding different PPD for different subprojects: As far as I can tell, WCG try to level the PPD between all their subprojects. But they can aim only at a global average; there will always be differences from subproject to subproject for a given host.)
Reactions: plonk420 and ao_ika_red

@plonk420 , if you don't mind, would you bench your 2400G with AIDA64 GPGPU benchmark? I'm just wondering how RR APU SP and DP performance compared with BR APU.

I ask this because last year, somebody on CPU&OC subforum posted about A12-9800 AIDA64 GPGPU benchmark and it had about 500+ GFLOPS DP performance. Unfortunately, I didn't find how it translated into mw@h performance. 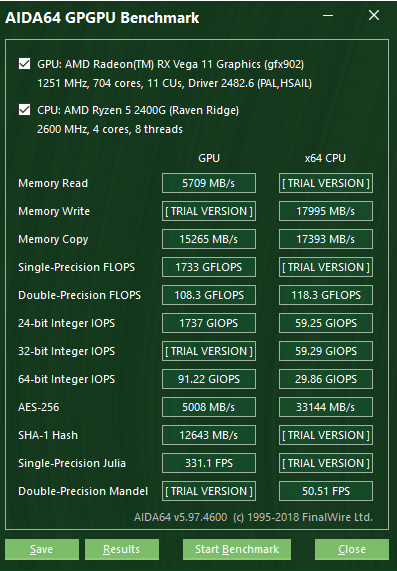 Thank you.
Its IGP DP performance suggests that theoretically, it's a tad faster than my old R7 360 GPU. Unfortunately, in reality it's still slower than the 360. Memory bandwidth is probably the main culprit here.
It's also interesting that AMD returns to the usual 1:16 SP vs DP ratio after having 1:2 ratio in BR APU.
Reactions: plonk420

does the CPU performance seem affected by single channel RAM?

In some cases, yes. My puny Athlon was heavily underclocked earlier this year in PrimeGrid LLR and VGTU projects. And that's with dual channel DDR3-1866.
Logically, a much powerful CPU with 8 threads need more than single channel DDR4-2400, and it's still shared with powerful IGP.

er, does it look affected based on the AIDA results? or hard to tell?

plonk420 said:
er, does it look affected based on the AIDA results? or hard to tell?
Click to expand...

I don't know exactly how AIDA performs its benchmark but I guess it bench each component of the APU independently. Take a look of 2400G IGP DP performance. Like I said before, theoretically it's a bit better than R7 360, but due to memory bandwidth constrain it performed slower than that.

As for CPU performance, it's harder to tell as each project has different needs. Some project will saturate memory bandwidth faster than others thus bottlenecked CPU performance.
You must log in or register to reply here.
Share:
Facebook Twitter Reddit Tumblr WhatsApp Email Link