Roboquest: a fun shooter with Borderlands vibes and weird issues

i am wasting some time playing a FPS called ROboquest
A "roguelite" (god i hate that term) FPS with some obvious Borderlands inspiration - both in the cell-shaded visual style, and the dropping of weird weapons.
You start from a "base camp" and go through a linear progression of levels, fighting stronger mobs as you progress, and picking up drops of new weapons and levelling up. There's perks and modifiers that slightly spice up the gameplay.
When you die, you respawn in the base camp, and you can spend the currency you earned on your run to upgrade the base camp. This allows you to find stronger drops in the following runs, hence the "roguelite" progression.

As a shooter, it's pretty damn good. The movement controls are very solid, the customization is on point, and i had no problem finding a mouse setting that allows for very precise aim. Double-jump and air control come as standard, with an additional option for triple-jump.

Visually, it's appealing, the maps are fun with lots of verticality, and doesn't have as much of that visual diarrhea as Borderlands does. The additional art is very nice too.

First off, the absolutely puzzling decision to force you to complete a run in 1 go, without any Quit&Save feature. Considering that a run can easily be a couple of hours, yeah, that's not great.
Also, the weapons are unbalanced. While they do have some situational weapons, most of the time some are great and some are garbage. And, there is nowhere near the drop that BL has, so once the game drops you weapon X, and you get it at Level 2, your run will pretty much crash once you get to Level 5 w/o that one uber weapon.
The snipers are absolutely broken and you can just cheese the entire game with one, even when a full 2 levels below your current map.
Mobs do change through the maps, with different movement and firing patters, and abilities, so it's not terribly boring, but also not terribly challenging for anyone with a bit of FPS movement sk1lz.

So .. it's .. "cute".
Prodeus is a much better FPS, even if a little basic, even with garbage visuals, but for someone who wants a cutesy casual FPS that allows a bit of progression and isn't terribly difficult, without though being one of those "impossible to fail" games, then maybe Roboquest is a decent buy. £15.99 on Steam which, imho, is way too much - £9.99 would be a more reasonable price. 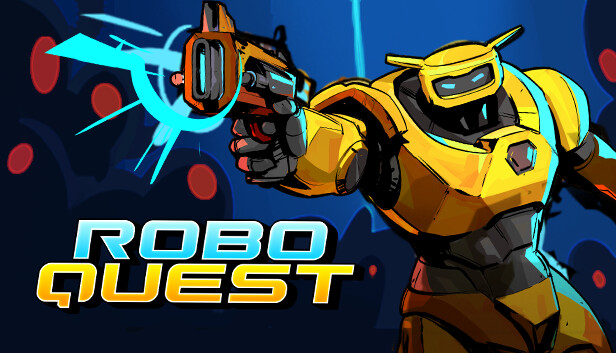 Save 20% on Roboquest on Steam

Roboquest is a fast FPS Roguelite in a scorched futureworld. You're a rebooted Guardian, ready to kick some metal ass! Fight with your buddy or by yourself and annihilate hordes of deadly bots in ever-changing environments.