Anyone remember how the last snow they got turned out?? 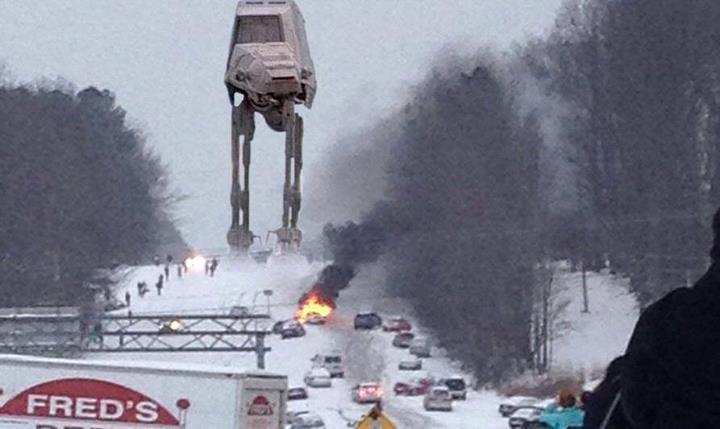 RIP to all ATOT'ers in NC. We will miss you.
Reactions: UnklSnappy, highland145 and Thebobo

They've already "closed" work for Monday. so either you come in or you take vacation........ I'll probably be at work doing nothing. maybe i'll finally get around to reinstalling windows and games on my gaming computer. work is a far better place to dowload my games vs my 6 Mb dsl at home. and windows updates.

CraKaJaX said:
Anyone remember how the last snow they got turned out??

RIP to all ATOT'ers in NC. We will miss you.
Click to expand...

Lol the walker is great!

We be getting rain.
T

My cousin lives outside and works within Atlanta. He grew up here, in Eastern PA, however, and he described how bizarre it was during that storm. He was driving down the highway out of the city passing cars like those pictured... in his Porsche Boxster.

TheVrolok said:
My cousin lives outside and works within Atlanta. He grew up here, in Eastern PA, however, and he described how bizarre it was during that storm. He was driving down the highway out of the city passing cars like those pictured... in his Porsche Boxster.
Click to expand...

Dude has a Porsche Boxster and lives outside?

Hopefully they won't get hit with any of that super-slippery Southern Ice. That stuff is so much worse than regular ice...
Reactions: WelshBloke

Thanks, Boomer, that crap is deadly. Exterous is an expert, iirc.

BoomerD said:
Hopefully they won't get hit with any of that super-slippery Southern Ice. That stuff is so much worse than regular ice...
Click to expand...

We're getting good dose of the deadly Southern ice right now. My deck was covered with heavy ice when I went out to bring in my grill inside so the gasket wouldn't freeze shut for the chuck roast smoke tomorrow. I just hope power lines don't go down due to the heavy ice.

up here in Canada we call that snow flurries.

nothing to worry about.

4 inches isn't that much

2014 Snowpocalypse is still fresh on people's mind. I will never forget the crazy traffic jam. I was stuck in gridlock traffic for like 8 hours that day and was lucky to make it home.

Traffic at local Costco was insane today. They didn't have enough shopping carts for people.

lol, my coworker is friends with that guy

it was -25F windchill that morning, absolutely brutal just walking to my car, and this guy drives with the top down like a boss

brianmanahan said:
4 inches isn't that much
Click to expand...

4 inches is really not bad at all. I guess if you don't have much of any snow removal infrastructure 5-6" can turn into a mess though. Which means if you know as a citizen your municipality has jack all snow removal gear, you should probably plan to stay home. Just sayin'

I still remember driving back home from Boston in 2010 just after Christmas to just outside NYC. Knew there was a big storm coming and left thinking we had just enough time to beat it. Well the forecast was a little off and it started earlier. By the time we got a little ways from the Tappan Zee bridge there were already cars spun off or just parked on the side of the highway all over the place and it was getting rough out there. Snow coming down hard and fast like dolla bills on strippers. The rest of the ride home on highways was white knuckled driving. When I finally got to a small two-laned slower highway near home where the speed limit was 40 it felt so much safer. Quite a few people on the road all things considered and no accidents there. No traffic jams either. We are hardy people in northern NJ and NY.

That was the first year I lived in a highly urban area without a private parking spot. Just street parking. I learned to never ever park your car on the right side of the road on a one way street during a big storm. I learned that as I was digging out the car the next day from the 20"+ of snow plus whatever the plows had dumped on the car.

Then last year I learned it's not always safe to park on the left hand side of a one way street either. Walking in my city to a friends I watched a gigantic plow going the wrong way down a one way street, plowing all the snow to what would be the left. Of course my car was tucked away 'safely' on the left hand side of another street, and turns out the plows jammed me in nicely on that street as well. Luckily it was a small storm of a foot or less. It's a gamble, but the right side is always likely to suck.

brianmanahan said:
4 inches isn't that much
Click to expand...

it is kinda funny to read all these warnings online about what could be just 4" of snow.

A picture from today of a grocery store down south. At least they are healthy, this looks like the prepackaged greens part of the store:

Eh having been there when there where there has been ice on the roads it a bit different than farther north where cities actually expect snow and ice and so have enough equipment to timely plow and salt the roads. The snow is meh but the ice can get pretty bad.

we're gettin some flurries here on long island .... but that's it. any reports from down yonder? are "ya'll " still alive???

CraKaJaX said:
we're gettin some flurries here on long island .... but that's it. any reports from down yonder? are "ya'll " still alive???
Click to expand...

Everything is iced over and it's toasty 23 degrees outside right now. Perfect day to BBQ. We rarely get snow in Atlanta so I had to take advantage. Got chuck roasts smoking on the Joe Jr. Should have some nice pulled beef sliders later today. Down here in Apex, NC (near RT55 / 64 / 1) we only got a dusting with a little freezing rain / sleet. Other areas of the state are doing worse, as is Delaware and Maryland

I quit messing around after losing power for days from the hurricane. 8,000 watt generator, plenty of fuel and a load of firewood. I'm ready so of course we won't lose any power.

We got about 10 inches give or take here the other day. Half decent snow fall but nothing too crazy. 4 is not really much, that's like 10cm. Just drive a bit more carefully is all, since it gets a bit drifty and easy to slide or lose control. IMO I find it's kind of fun to drive in. But I have front wheel drive which is much easier in snow.
You must log in or register to reply here.
Share:
Facebook Twitter Reddit Tumblr WhatsApp Email Link