Hello,
I have checked my hard disk drives lately and I get warnings on two of them. 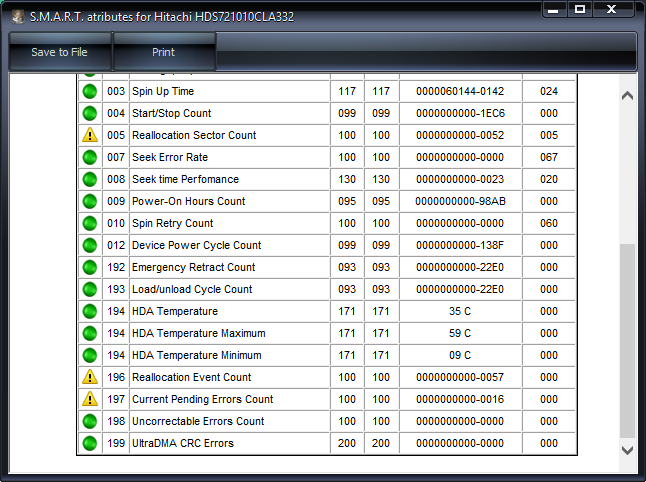 I don't know what this means and it is the same warnings on both hard drives.
Is there a way to fix this and what can happen if anything goes wrong?

Looks like that drive might be developing some bad sectors on the platters. Since Hitachi is now owned by Western Digital, you might want to download WD's diagnostic software and run a full test on the drive.
Reactions: Donanza

A hard drive's capacity is divided into sectors. Most hard drives also have a reserve of sectors that don't normally get used, so if some go bad, some from the reserve can be used. If this happens, the bad sector won't be used again. Your drive's diagnostic system has reported detecting bad sectors, some have been reallocated already, some are still pending. This process can happen - as far as the user is concerned - pretty much silently (ie. without interruption / excessive delay).

If a sector goes bad, there isn't any way I'm aware of to fix it. It's an issue that qualifies for warranty repair (if the drive is still in warranty) and the drive will be replaced by the manufacturer (ie. I have not heard of a manufacturer repairing bad sectors).

IMO a drive developing bad sectors is often a sign of the drive's deteriorating health. I advise customers that if their need for their computer is urgent enough that the faulty drive causing problems (such as Windows not starting) would be a serious inconvenience, and that the customer would prefer to avoid such a scenario happening unexpectedly, then I recommend replacing the drive ASAP. If however the customer would not be seriously inconvenienced by the drive dying unexpectedly and the subsequent time to replace it, then I recommend letting the problem run its course for now.

1 - sudden death ("It was fine the night before, now it refuses to work at all")
2 - death by a thousand cuts ("the computer has been running very slow lately, sometimes Windows wouldn't start the first/second/third time, and the problem is getting worse")
Last edited: Nov 17, 2017
Reactions: Donanza
D

The problem is that very rarely and it is happening quite often now, the drives start to be accessed very slowly, or I need to wait quite alot to access a photo or something.
I believe it is a sign they are going to not work anymore and those drives have 5 years + working day in and out.
Thanks for the info.
You must log in or register to reply here.
Share:
Facebook Twitter Reddit Tumblr WhatsApp Email Link