I personally prefer first person. While the others can certainly be fun, they all feel like you're controlling a character.

Only first person feels like you're actually controlling yourself. That's why I also prefer inverted mouselook, but that's another topic.

This is especially true if you look down and see your body/legs, and if your silhouette casts realtime shadows when you're next to a wall, like Fear is doing when I'm replaying it now.
Reactions: DigDog

First Person for most games. Third Person works well with many games that use it though. Don't like Isometric at all, although I wouldn't reject a game with it, then again I play no games that use it.

Isometric for strategy games, first-person for combat games. Third-person is the devil.

Variety is the spice of life: I like them all if it suites the genre of game I'm playing.

Any one that didnt answer "1st person" isnt a true gamer! 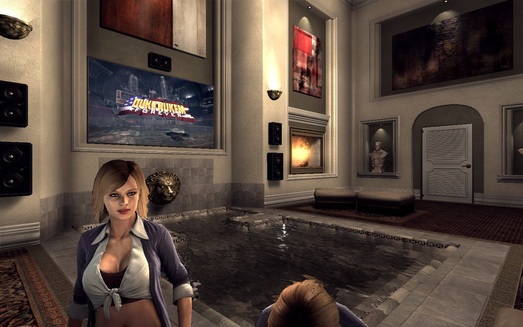 Depends on the game. If you're controlling a single character 1st person generally, but some stuff like diablo is better in isometric.

3rd person generally is just them doing 1st person and blocking half the screen with your character.

Midwayman said:
Depends on the game. If you're controlling a single character 1st person generally, but some stuff like diablo is better in isometric.

3rd person generally is just them doing 1st person and blocking half the screen with your character.
Click to expand...

When I played Dragon Age: Origin I used 3 24" screens. My third person view character was in the center screen. It was an awesome experience.

Oyeve said:
When I played Dragon Age: Origin I used 3 24" screens. My third person view character was in the center screen. It was an awesome experience.
Click to expand...

Melee combat games I sorta give it a pass. Its a lot harder to judge distance in 1st person mode.

I guess first person would be my favorite but preference-wise I agree, depends heavily on the game. I suppose first person is technically more "immersive" than third person view but some games do a decent job of bridging the gap with the old over-the-shoulder view, like Gears of War, RE4, evil within etc. While I really like first person, I absolutely love those third person experiences too.
R

really depends on the game, but for most first person.

I voted other as I have no preference. There are so many elements that go into making a game fun, and so many types of games, that I don't even have a favorite genre. My only qualifiers for a game are, whether or not it is fun and immersive.
Reactions: GodisanAtheist

Isometric purely based on the most fun playing games has been in that view. All views have their place but games like Diablo are where I had the most fun.

It depends on the type of game it is. It also has a lot to do (for me) based on the chronological evolution of gaming from the moment I started to play them. I started with side (scrolling) and top down view, like many, then it changed a lot during the transition to and arrival of 3D gaming. I think that the real answer for this (again, speaking for myself here) is that I really don't have a preferred point of view in general. Although of course I usually do say that FPS or Third Person games are the ones I tend to like the most. But I can end up saying that a particular game couldn't (or could) have been "better" with another point of view, for instance.

For example, I wouldn't be interested by a Mario FPS game, it just wouldn't work, but when I saw the first gameplay videos (a few years ago) of the Final Fantasy 7 Remake as a third-person action game, however (instead of keeping the original top down view), then I was definitely for it. There's some types of games, and even specific franchises out there that I really think should stay with one (or their 'original') point of view; while some others could be 'flexible' enough and would still work fine if they explored new points of views from time to time.

Now, with all this said, my "preferred" point of views in most cases are First and Third Person. I also love Isometric / Top-Down for RTS games. But - ultimately - I really like them all, as long as the game I'm playing is good, then its point of view merely feels and becomes "natural".
M

PvE (if it's PvP, or a PvP server on an otherwise PvE game, no to TPP) MMORPGs, ehhhhhhhhhh....long as first person is fully supported, I guess it's OK.

Any other genre where you control a specific avatar (i.e., not RTS for example), the only excuse for third person is melee heavy game design, and even then, it's a weak one. In multiplayer, just no to third person except for extreme melee games and even then not sure I buy that as a justification.

And I'd like to challenge that TPP is more popular if sales figures are used to justify it....if a game is TPP only then duh, if people want to play it they have no choice but to play TPP. Using raw sales of the game that doesn't give a choice doesn't count.

Third person. The birth of First person was the death of games.
Reactions: PeterScott
B

It totally depends on the game. ARPG's are either isometric or 3rd person (3rd person can be a lot like isometric if you zoom out enough). RPG's where you control a single player and FPS games work best in first person view, although over the shoulder view isn't bad in many cases. There are so many different types of games which work best with different views. They all work, as long as the UI also works with it.

zinfamous said:
Third person. The birth of First person was the death of games.
Click to expand...

Not First Person, because it gives me motion sickness.

Depends entirely on the game and the genre. Shooters are better first person, games like Diablo are great in the isometric view as are strategy games. Hack and Slash games like Bayonetta and Devil May Cry only work for me in third person. Top down or side scrolling for SHMUPs like r-type, strikers 1945, or metal slug. Platformers can be third or side scrolling depending on whether it's 2D or 3D.

zinfamous said:
Third person. The birth of First person was the death of games.
Click to expand...

this guy gets it.

I have zero interest in third person view. First person is my preference. Side scrolling is okay for simple games but they generally don't hold my attention.

The view the game presents.