The series is one of the pioneers of the open-world overland =/= enter town/dungeon dynamic that many RPGs still use to this day. Also the grid-based first person dungeons no doubt inspired the plethora of DOS dungeon crawlers that came later. My main gripe was you couldn’t move or attack diagonally while monsters could, in the early games at least. 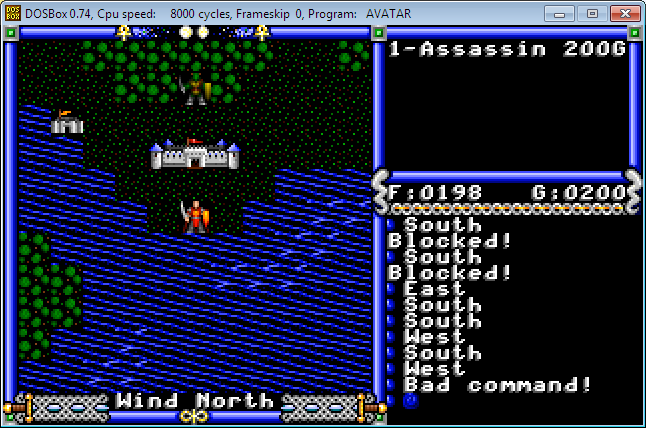 Ultima 3 has the distinction for me of finishing it despite all odds. At the time I had no internet access and no documentation/manuals, so I had to learn and discover everything completely blind by trial and error. It took me months to finish and felt really satisfying to get the game’s digital completion certificate. I played it on the Apple IIe.

I started playing Ultima 4 on the Sega Master System II but never finished it as I was never really sure what I was supposed to be doing. I like how they streamlined the controls on the console so simply mashing button#1 still let you fight effectively. The graphics looked much better than the DOS version too.

I briefly played Ultima 5 on my Apple IIe but didn’t get far. It did look nice as it was one of the very late games released for the system, so it really pushed the machine to its limit.

Maybe one day I’ll finish 4 & 5 under DOSBox (Ultima 4 is pictured above on my system with the VGA graphics patch applied).

I haven’t played any other games and have no intention of doing so. I did like watching some Ultima Underworld let’s play videos, though I could tell the UI was really clunky.

Ha! Lord british being assassinated online was the best!

I never had the chance to play them until screen resolutions were so high that they are almost impossible to make sense of. I've tried to play VII many times and just can't bring myself to do it. Too archaic and pixel huntish.
S

I only played iV. I didn't finish it. I own them all on GOG and I have tried to go back and play them again, but the controls for the earlier games are brutal. Maybe I'll give one of the later ones a try.

I know it will never happen, but in this age of remakes, it would be awesome if someone remade them like they have been doing with other classics.

I spent far more time playing VII and Serpent Isle than any others, so it kinda gets my vote by default.
Lots of time with Underworld I & II though, between VII and Underworld, they were just mind-blowing as far as what you could do.

I played 1 though 5 to finish on each of them back in the day and loved them. Six was OK, but lost interest in 7 and beyond, which is when the series really got popular because of it's "modern" graphics.

Ultima is an example of my basic theory of games-what matters is the quality of the gameplay, not the sound,pictures or (ugh) cutscenes. Chess and Monopoly are two of the greatest games ever but both are remarkably simple in their design and mechanics.
You must log in or register to reply here.
Share:
Facebook Twitter Reddit Tumblr WhatsApp Email Link