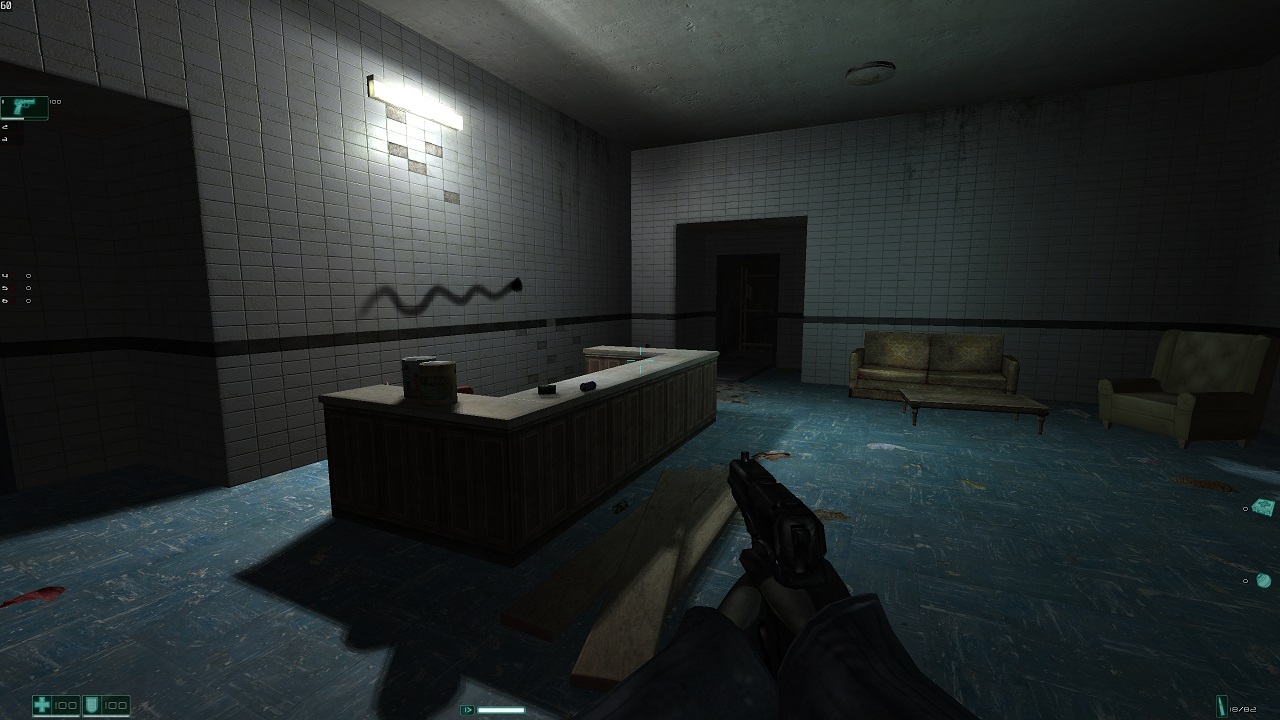 I’ve finished it over half a dozen times so this time I ran it with soft-shadows and FXAA with an infinite flashlight mod. The shadows offer a significant visual upgrade while the FXAA applies a soft “bloom” filter effect which makes the game look like it came out later than 2005. (Sadly the screenshot doesn’t capture the FXAA effect).

Game design still holds up impressively well with my only real gripe is that some parts drag a bit too long, like the office cubicle areas.

Damn shame Condemned 2 never made it to the PC.

Not an easy one to vote for, I liked a couple of games from them for sure.

I'd say No One Lives Forever 1 & 2, along with Blood, and the original F.E.A.R., are probably my favorites. And I'd give AvP2 an honorable mention. My favorite is probably Blood, although that's also based on nostalgia. If I'm honest with myself I'd have to say that the first FEAR is maybe their best game overall, if I also include the tech behind it. I do say maybe... it's a tough one. It's either FEAR 1, or NOLF 2, tough choice. I really liked the first NOLF, but I think I preferred the second (admittedly I haven't played either of them in many, many years; I'd have to re-play both to recall which one I preferred overall). But I dunno... yeah tough picks, if I had to go with just one.

I could think of it with the context of the time in perspective when I first played the original FEAR. The thing is I've never really been a fan of games trying to be spooky. It rarely works (for me, anyway). I'd say back then I bought it simply because it was a 'new FPS game' to try. I'm pretty sure I was aware of the fact that it was sort of a "horror" type game (or that the setting was), but I just wanted to try out something new. Plus, if I recall correctly, when the first FEAR came out it was featuring some very amazing visuals for the time. I ended up completing it I believe 2, possibly 3 times. I recall wanting to play the game more than once from start to finish not exactly because I enjoyed the "fear" aspect of it (which wasn't too bad but nothing too crazy, a lot of it was predictable; I think I had maybe 2 slight jump scares... what worked perhaps was the 'apprehension' aspect, the "dread" in some areas, if anything) but because the A.I. in that game was incredible - at least as far as A.I. in FPS games go (and to this day it's still impressive).

But, if I analyze in a "whole package" way, overall enjoyment of any one of their games I played then yeah I think I'd have to go with NOLF 2. And Blood is a great Build engine FPS really.

The latest game I do own that was made by them was the first Shadow of Mordor game, with that famous Nemesis enemy system thing. I did play that one for a good 20'something hours I think. But at some point I kind of abruptly lost interest, stopped, uninstalled and never touched it again. I didn't "hate" it, actually, I did enjoy it to some degree. But I think overall I wasn't too impressed with the Nemesis system, realizing that in the end it was just a means to raid enemy camps, kill the "main boss" there, find another camp, do the same, find another camp and do the same thing again... I mean I saw little gameplay variety I think, from what I recall it felt repetitive too quickly. Although it's been many years of course (literally the same year it came out) and I never played it again since. They did make a sequel too I believe, but I completely skipped that one.

FEAR would be the favourite, but I loved Shogo MAD.

BFG10K said:
my only real gripe is that some parts drag a bit too long, like the office cubicle areas.
Click to expand...

i have only played it twice, or maybe 3 times, because it loses a lot after the first runthrough, but that first run is memorable. Haters say it's just jumpscares, but at least they were well made.
FEAR is both a great horror and a great FPS, in some ways better than modern titles, and everyone should play it once.

Shame about that garbage title though; "FEAR" was enough, they didnt need to call it "First Encounter Assault Recon".

I love FEAR but I never once thought it was a horror game. I always thought it was weird but I jumped at Doom 3's jump scares but my buddy ran through that game like it was just another Doom/action shooter whereas I ran through FEAR in the same manner. That same friend also broke his mouse during the Alma/Ladder sequence in FEAR and Doom 3 on the XBOX was the first (and only) game to make me drop my controller from a jump scare. Different strokes and all that, but I think the most memorable part about FEAR for me will be the introduction. 90s and early 2000s PC games just had next-level intros to their games. I wish developers would bring that back.
C

I played all the FEAR and NOLF games for the first time last year. FEAR's basic combat and AI are great, but the game gets really repetitive after a while. All the levels and enemies look very similar and generic, although Perseus Mandate is somewhat better. It was a common problem with FPSs from that era. The AI is some of the best in any FPS ever made, probably tied with Descent 3 for me.

I liked the NOLF games much better. Lots of great levels (each one is totally different), and great story with funny characters. The stealth missions are a bit clunky and it's best played as a straight up FPS.

Another reminder that I'm getting old.

My remembrance of playing FEAR seems far more recent than 16 years ago.

A fond memory is kept fresh.

Still one of the best AI in an FPS game ever, fantastic level design too.

I thought the horror aspect was really subtle which definitely had me tense in several moments. Creating tension while your packed with high powered weapons is actually quite hard. It struck a really nice balance between all out action, an eerie sense of calm, and also some humor as well(fat guy character). The silence after a battle or some comic relief is something more games need to do, it set you up for the horror moments when you weren't expecting it. Voice mails were a nice touch too in creating the ambience.
You must log in or register to reply here.
Share:
Facebook Twitter Reddit Tumblr WhatsApp Email Link