New Macbook Pros, Yet no Kaby Lake G inside. Why does it exist?

Many had the theory, that Kaby-G was for Apple, but I was very skeptical of this and now we have new Macbook pros, and none of them use Kaby-G.

I have questioned from the beginning if Kaby-G is really just a publicity stunt for EMIB and Intels new era of "cooperation".

When you join two products a package, you run into the problem, that to sell it, you really have to make sure that is the exact combination people actually want to buy, and that it is more cost effective than buying separate products.

I am not convinced Kaby-G meets either of those criteria.

Why does Kaby-G even exist?
Reactions: lightmanek

Rumor has it that Apple is refreshing the Mac Mini this year, so it could be used in the Mac Mini, also I imagine Kaby Lake G is the start of a lineup of processors that will move to Intel's own dGPUs in the 2020~ timeline so they can offer integration advantages for OEMs and try to capture some market share.
J

Well, Kaby-G did get delayed by several months. Possible that Apple passed on it because of those delays. But I think it was more of an R&D exercise for EMIB, yeah.
Reactions: Dayman1225

Is there any information about what kind of protocol the cpu and gpu talk to each other ?
Has the gpu just a standard pcie3.0 x8 or x16 connection to the cpu ? That makes the most sense to me because Intel does not talk infinity fabric and it does not make sense to make an EMIB chip that connects the gpu and cpu and translates scalabe data fabric and infinity protocol to for example Quickpath interconnect.

William Gaatjes said:
Is there any information about what kind of protocol the cpu and gpu talk to each other ?
Click to expand...

uses PCIe, EMIB is only used to connect the GPU and HBM together.
Reactions: William Gaatjes

Dayman1225 said:
uses PCIe, EMIB is only used to connect the GPU and HBM together.
Click to expand...

If Apple would make a new mac mini, the Hades Canyon NUC from Intel might have been a precursor.
https://www.anandtech.com/show/12572/the-intel-hades-canyon-nuc8i7hvk-review-kaby-lakeg-benchmarked

I found a picture how it is connected : 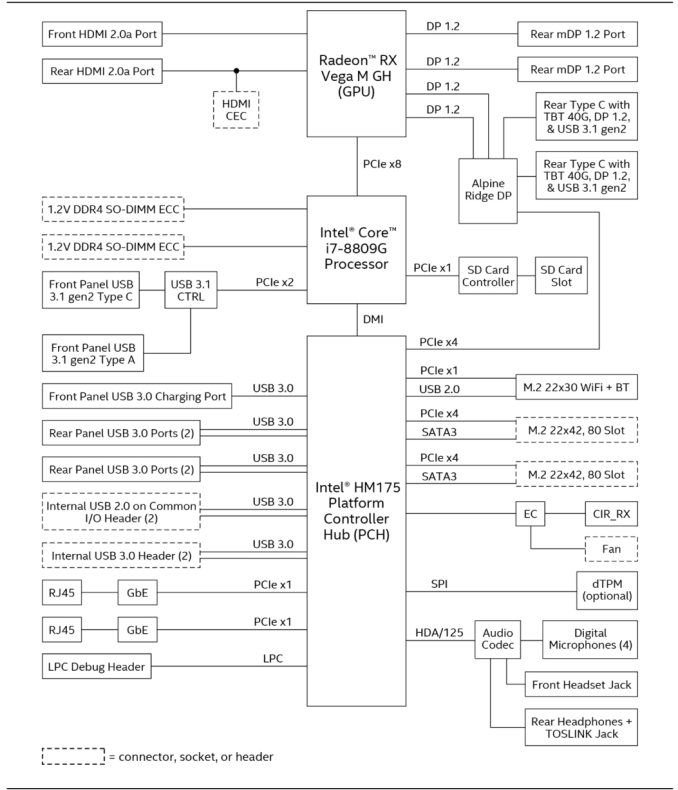 edit:
When i look at the package, it makes me wonder if emib is used. Seems like just an MCM.
The EMIB die would be huge.

edit:
nevermind, the EMIB is used to connect the HBM to the VEGA GPU and not the cpu to the gpu.
Last edited: Jul 12, 2018
Reactions: Dayman1225

Kaby G is used in NUCs.

Yes, used in Hades Canyon, 2 laptops and a Mini PC from Chuwi

I also think it will feature in the Mac Mini. Seems the ideal device for it.

William Gaatjes said:
nevermind, the EMIB is used to connect the HBM to the VEGA GPU and not the cpu to the gpu.
Click to expand...

They opted for the fastest time-to-market. Hence why it uses existing CPU and GPU cores.

The CPU-GPU portion isn't necessarily bound by bandwidth or latency so PCIe is fine for it. Tests on the highest end GPUs show PCIe x8 is enough, so that's definitely fine for even RX Vega M GH.
Reactions: William Gaatjes

The Macbook Pro can easily cool 80W so it is disappointing to not see KBL-G.

ZGR said:
The Macbook Pro can easily cool 80W so it is disappointing to not see KBL-G.
Click to expand...

Why? Kaby Lake-G is worse than Coffee Lake-H.
Reactions: PeterScott

Arachnotronic said:
Why? Kaby Lake-G is worse than Coffee Lake-H.
Click to expand...

It is pretty power efficient. The current 15" shares the same heatpipes with the CPU and dGPU.

My biggest problem with Apple Macbooks is their very poor thermal paste application which results in extremely high temps. That coupled with the ludicrous 100C fan curve makes an out of the box experience rather lackluster. I like my Macs cool AND quiet under load which requires opening the sucker up.

I definitively prefer 12 threads over 8, but I wouldn't mind the choice!
J

Also worth noting that Apple switched to standard DDR4 on the 15" so they could offer 32 GB of memory. I'm sure they would prefer LPDDR4/X but of course Coffee Lake doesn't support it.
Reactions: Lodix

It could be that Intel made it to show Apple that they can make products like that, not necessarily that Apple commissioned it (and so Apple wouldn't have had time to prepare it as a package). Or it could be that Apple requested it, but that it ended up not meeting their expectations so they decided not to use it. And maybe its a mix of both, Apple has requested such a product, but that they knew it wouldn't be viable yet, so they had no plans on using Kaby-G, but Intel still made it so that they could get some experience with the packaging, and then the version Apple is intending to use is a 7nm GPU. I've wondered for some time if this isn't a product aimed at either a new device, or significantly changing one of their already existing ones (possibly multiple ones, thinking iMac-non Pro, Mac Mini, and/or the lower level Macbook; ones where they deliberately are wanting to minimize having a separate packaged dGPU but want more GPU power).

The most likely one I think is that its Intel trying to take initiative by making a product that they think Apple would want, with Intel planning on putting their own dGPU in there at a later time.
Reactions: Vattila

I think it's most likely that Kaby-G has absolutely nothing to do with Apple, and never did.

Kaby-G is primarily about marketing Intel capability to work with third parties on EMIB connected products.

It seems the new 6 cores have a big throttling problem on the new MBP's...
B