MLB scandal, World Series winning Astros were stealing signs... give back those rings?

Hans Gruber said:
I was asking how it was possible for both Houston and Boston to be able to hit 100mph fastballs so well during the playoffs.
Click to expand...

By the 2018 post season I think MLB knew something was going on. They put MLB officials in the clubhouse replay rooms to make sure nothing untoward was happening.

Coming from you, I believe it. Kudos!

Artorias said:
You are never going to catch every team that uses technology to cheat. Plain and simple. Technology has let the cat out of the bag a long time ago.

They should just give the pitcher and catcher an electronic wrist device to communicate pitch selection. This way the "sacred" bond isn't harmed.

As for cheating in general, well that's just human nature, I don't even know why sports bother with PED testing, everyone is on them, some just have more money for bribes and designer drugs.
Click to expand...

I don't believe cheating is ubiquitous. I've always been into athletics, only competed on high school tennis team, but like sports. Played pickup basketball, like to golf, have bowled for time to time, played little league baseball. I don't remember ever cheating. I just can't believe all pro athletes cheat.

Tell me, did Sandy Koufax cheat? Did Joe Montana? Did Jim Brown cheat? Maybe he took drugs, don't know if they had steroids then. He was a mountain of a man, I saw him once after he retired, he played my home course.

I suspect there's a lot of drugs being done in the NFL, performance enhancing, I don't know the details of what the league is doing to control it or turn away from it, I'm curious. But I figure some of the guys are clean, or close to it. Those drugs have side effects. Not everyone is willing to screw themselves up.

MomentsofSanity said:
You might have to strip Boston of their win in 2018 if you do this. The common denominator? Alex Cora. He's going to go down in flames when this is all done. 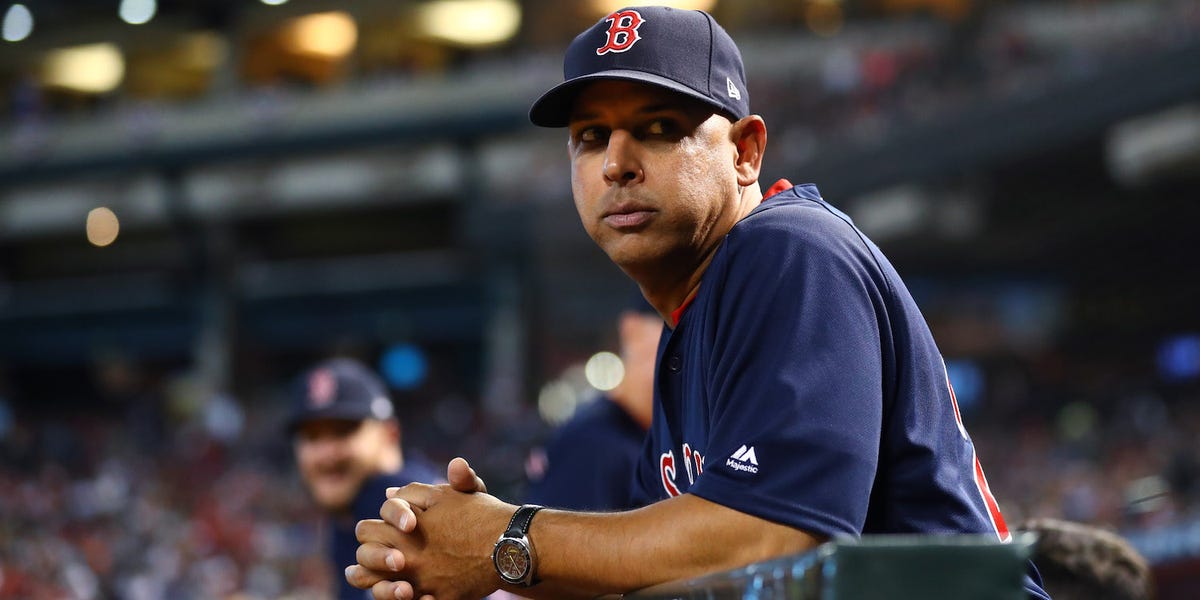 The MLB came down hard on the Astros for cheating, but that might be small compared to what will happen to Red Sox manager Alex Cora

Alex Cora was reportedly credited with helping to initiate the scheme when he was with the Astros, and he's accused of using the strategy in Boston.

Sunburn74 said:
I just don't think this is a big deal. I don't think it helps the players that much. It's not like batting averages were that much higher. In fact to be honest, I think every team should be able to steal signs through the use of modern technology. I don't see it as really affecting the game that much and it creates a new level of strategy and warfare between teams.
Click to expand...

You don't see an issue with a batter knowing if they are getting a change up? Every MLB could kill a change up if they 100% knew that was what they were going to get. Breaking balls, don't swing, it'll be a ball, 90% of the time.
Reactions: Vic

uallas5 said:
By the 2018 post season I think MLB knew something was going on. They put MLB officials in the clubhouse replay rooms to make sure nothing untoward was happening.
Click to expand...

The Astros were not using the replay room. They had a card table setup for someone in the clubhouse tunnel with a laptop. So it was mobile. They have a video showing the mobile setup they used after they won the world series. The only thing left was a pile of sunflower seeds. I think they had snitches on their team. Oh, when players leave teams for money and another team they out their former teams. That is baseball for you. I think the only reason they banned Pete Rose for life was not just that he bet on his own team. But that he bet on them to lose games.

skull said:
Your crazy if you don't think professional sports are that way already. They are all on steroids. There was a documentary on netflix or amazon on the main doc that provided the steroids to the baseball players during the big scandal. Interesting story, nothings changed, there are more docs that help these guys cheat and pass drug tests in all the sports including the Olympics.
Click to expand...

Why do you think this is a valid argument? Of course people are cheating. That doesn't mean we should give up on having rules. All that would do is ruin the game.
Reactions: Zorba

zinfamous said:
I don't see how it's worse than the Black Sox. I'd say they are about the same.
Click to expand...

Black Sox were a few players that decided among themselves to cheat by throwing the game.
Astros (and likely others) have instituted a systemic process within the organization that involved all the players and coaches and the GM (I'm guessing ownership knew too but..)

As more and more things come out and more and more people are talking. it seems this whole thing, or setups very similar to them have been going on for quite some time and for many (and presumably all) teams.

Homerboy said:
As more and more things come out and more and more people are talking. it seems this whole thing, or setups very similar to them have been going on for quite some time and for many (and presumably all) teams.
Click to expand...

If true, makes me wonder if pitcher/catcher combos wouldn't "change up" ( ) on the cheaters by having a hand signal driven scrambling of the signs that's mutable. So a batter would go, "OK, this is a fastball" but it turns out to be a slider, etc. Crazy shit, but IMO that could work. Between innings a pitcher and catcher can communicate and jumble the signs. Maybe that could be decoded by clever cheat teams, but like a mutating virus, a moving target isn't easy to hit. "There's more than one way to skin a racoon."
You must log in or register to reply here.
Share:
Facebook Twitter Reddit Tumblr WhatsApp Email Link