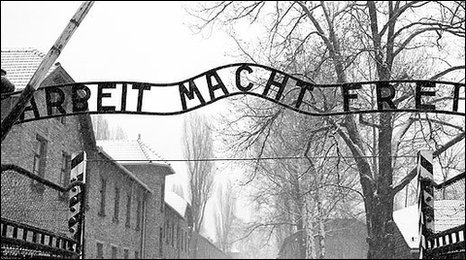 The infamous Arbeit Macht Frei sign at the entrance to the Auschwitz Nazi death camp in Poland has been stolen.

The wrought iron sign, whose words mean "Work Sets You Free", was unscrewed and pulled down from its position above the gate in the early hours of Friday.

Polish authorities denounced the theft, while Israel's Holocaust museum branded it an "act of war".

More than a million people - 90&#37; of them Jews - were murdered by the Nazis at Auschwitz during World War II.

Investigators say at least two people would have been needed to steal the five-metre-long (16ft), 40kg (90lb) sign.


Jarek Mensfelt, from the Auschwitz-Birkenau Museum, told the BBC: "It is more than just stealing something. It is a desecration.

"Somebody who did this must have been a person who had a knowledge of our security system because all the area is closed at night and patrolled and there is a system of cameras," he added.

"This was not an incident - this was a deliberate and organised action."

He added: "We don't know the identity of the perpetrators but I assume they are neo-Nazis."

Polish ex-President Lech Walesa described the theft as "unthinkable", while Poland's chief rabbi said he could not imagine who would do such a thing.

"If they are pranksters, they'd have to be sick," said Michael Schudrich.

Polish President Lech Kaczynski called on the public to help recover the sign, which he described as a "worldwide symbol of the cynicism of Hitler's executioners and the martyrdom of their victims".

In a statement, his office said Mr Peres "expressed the deepest shock of Israel's citizens and the Jewish community across the world", and urged Poland to "make every effort" it could to find the criminals and return the sign.

It is not clear why it was stolen but museum officials say the widely recognised sign would be difficult to sell.

Oswiecim Police spokeswoman Malgorzata Jurecka told AFP: "All leads are being considered, but we are focusing on a theft ordered by a private collector or a group of individuals."

It is the first time the sign, made by Polish prisoners, has been stolen since it was erected in 1940.

It has now been replaced with a replica while the hunt continues.

The cynical slogan "Arbeit Macht Frei" was also used at the entrances to other Nazi camps, including Dachau and Sachsenhausen, although the one at Auschwitz is perhaps the best known.

Hundreds of thousands of prisoners passed under the sign into the camp during the Holocaust, but the majority were murdered or worked to death.

The theft comes just days after the German government pledged 60m euros ($86m) to an endowment fund to help preserve the camp.

Auschwitz, which receives more than a million visitors a year, has been run as a state museum since 1947.
Click to expand...

This is really messed up. A number of motivations can come into play when stealing (in)famous things (salvage, lulz, profit). Here, locally, we just had some fuck-sticks steal a bunch of veteran/war memorial plaques in the past couple of days, which I think goes far beyond stealing man-hole covers. I think that this theft is a bit worse, given that it is sentimentally irreplaceable.

I hope that they track down the dumb-asses who did this, simply because I can't imagine that anyone rational could rationalize stealing this sign without a serious lack of common sense and morals.

I'm rather conflicted between the camps of opinion regarding death camps (tear them down vs. preserve them). While I understand the motivation for preserving the site as an important "teachable moment" in history, I had to LOL WUT at the following:

From what I've read about this story, the "experts" agree that selling this thing without getting caught would be MOAR impossible than selling a stolen Picasso.

This was either a privately-contracted job, or a few numb-skulls having "an evening."

Also, they apparently broke the sign in the process--they unscrewed one side, then twisted and ripped off the other. I would think that this suggests a bunch of idiots rather than professionally-hired thieves.

In all seriousness my "most likely scenario" is that a couple of people looked at it as scrap metal and just took it because they could. No deeper meaning. Not even about money. I grew up with people like that. Mindless animals.

It's not a memorial per se, but it marks something significant. Those who took it show a disregard for those who died there and that tends to piss people off.

As I said, the original sign is "sentimentally irreplaceable," because a million people walked under it to their grave. Stealing something with such morbid significance is twisted, at the least--regardless of whether you think Auschwitz and the sign in question are used an an attention-whoring prop by "some segments of society."