If you think gas prices are bad...

I'm glad my kids are grown. 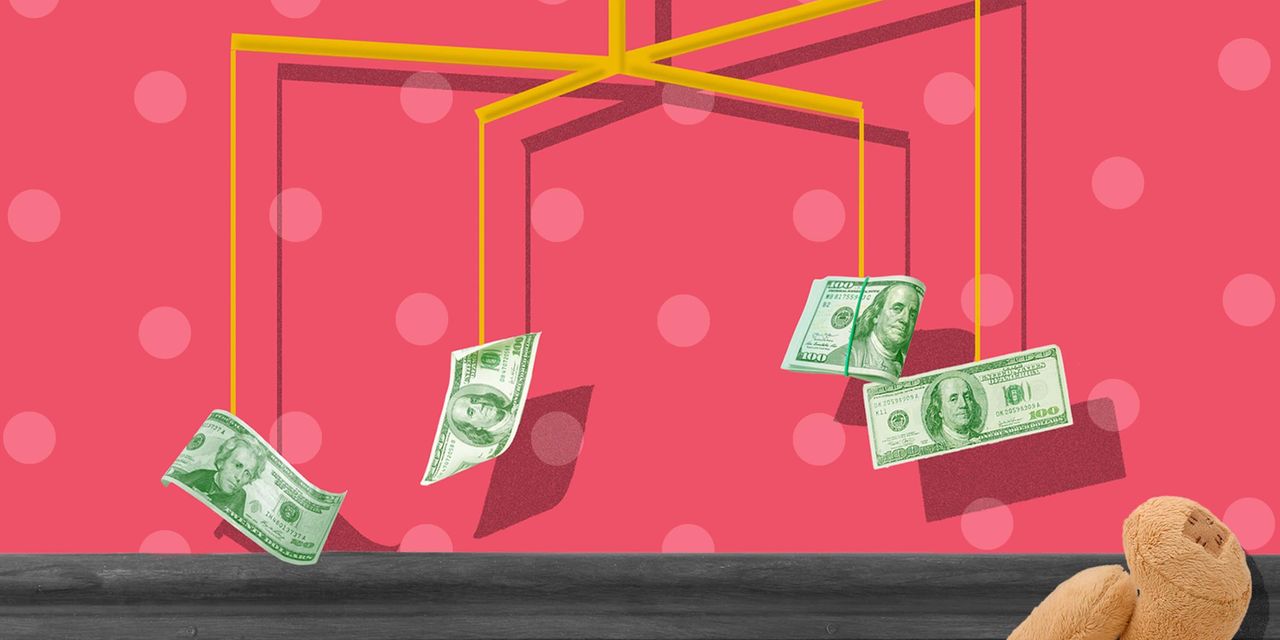 Teen Babysitters Are Charging $30 an Hour Now, Because They Can

Sitter shortage has parents treating teenagers like VIPs; ‘order anything you want for dinner’

Teen Babysitters Are Charging $30 an Hour Now, Because They Can
Sitter shortage has parents treating teenagers like VIPs; ‘order anything you want for dinner’

Before the pandemic, Dani Gantcher earned about $15 an hour babysitting in her hometown of Scarsdale, N.Y. Parents sometimes asked her to wash dishes or stay late.

“They just thank me profusely, so much that I’m like, ‘Oh, my God, I was literally only here for three hours,’ ” she says. “The power dynamics have shifted between the teenage babysitter and the parent.”

After two years of hunkering down at home with their children, parents are returning to their office jobs and social lives and are competing for part-time sitters at the same time. Teens are getting better snacks, doing fewer mundane chores and are commanding top dollar.

In Easton, Mass., 19-year-old Emma Sharkansky is making up to $30 an hour—up from $12 a few years ago. Parents are ecstatic to see her.

“It used to be you walked in and were all shy and saying thank you so much and feeling grateful to get a little spending money,” the soon-to-be college sophomore says. “Now, I’m walking in and they’re thanking me more than I could possibly thank them.”

She still tries to go above and beyond by making up games to play with the kids and staying off her cellphone. “But parents don’t ask anything above the bare minimum anymore,” she says.

A tight labor market is creating one of the best summer-job markets for teens in years. Businesses facing a pandemic hiring crunch are scouring teen job fairs and offering bonuses and flexible schedules to young people. A daycare worker shortage is leaving parents scrambling to make alternative arrangements. Unemployment among teenagers is at its lowest level in decades.

Moms and dads are in no position to bargain or throw out lowball offers, Kidsit.com, an online babysitting resource, warned parents in a 2020 post: “It’s best to play it safe and offer your sitter a competitive rate up front. That way you minimize the chances of them getting poached from you.”

Some babysitters say they are setting rates, based partly on what they hear from other teens. “In one class, there are four of us that all babysit regularly, and we all talk about it,” says Kate McLaughlin, 17, who lives in a Boston suburb. She now brings in $15 to $25 an hour, up from $10 to $15 before the pandemic.

Ashley Noto, 45, says she never had trouble finding an after-school and occasional weekend nanny for her 11- and 9-year-old sons before the pandemic. In early 2020, she paid her nanny—a college graduate—about $20 an hour to drive her sons to their various extracurricular activities and cook them dinner in the Atlanta area.

Last spring, when Ms. Noto, the chief of staff at financial-technology company Greenlight, checked the same blogs and Facebook parenting groups where she had always found success, she came away with nothing.

“Either I wasn’t moving fast enough, or they were getting snapped up,” says Ms. Noto.

One of the Notos’ most frequent sitters is 15-year-old Liam Gregg. Liam recently raised his rates to $15 an hour, from $10. He is putting his earnings toward a new computer.

Some parents don’t even ask how much he charges, handing him as much as $20 an hour. They will often order him a meal along with food for their kids—and tell him to help himself to anything in the fridge. He isn’t allowed to use the stove.

Bree Steiger, an 18-year-old high-school senior from Longmeadow, Mass., now charges $15 or $16 an hour, up from $9 to $10 prepandemic. She, too, has seen amped up perks, including DoorDash takeout service.

“One family was like, ‘We’ll order anything you want for dinner,’ ” she says. “It was awesome.”

Evelyn Loperfido, 15, has been making up to $35 an hour babysitting in her hometown of Crested Butte, Colo. Before the pandemic, she charged $10 to $12. She says she has made more than $1,000 babysitting in the past year. She is using the money for clothes and perfume her parents didn’t want to pay for.

She tries not to take advantage of parents who had kids during the pandemic and might not know how much sitters charge, she says. She has even told them they are over-paying her. “But they will sometimes come back after going out all night still kind of having fun or a little tipsy, and they will just give me whatever they have in their wallet,” she says.

In Walnut Creek, Calif., Anar Hooper, a financial-content marketer and mother of three, says that in her area, many nannies are charging $40 an hour, plus benefits. She found a high-school junior who lives next door and is charging $25 an hour. Ten years ago, when her oldest daughter was little, she paid teenage babysitters closer to $14.

I like the well off parents who are so happy to be away from the kids they just drunkenly thrust fistfuls of cash at sitters.

She has even told them they are over-paying her. “But they will sometimes come back after going out all night still kind of having fun or a little tipsy, and they will just give me whatever they have in their wallet,” she says.
Click to expand...

K1052 said:
I like the well off parents who are so happy to be away from the kids they just drunkenly thrust fistfuls of cash at sitters.
Click to expand...

Can you think of an easier way to pay for college?

Only until the older sibling gets old enough to watch the younger one.
Reactions: hal2kilo
P

Speaking of gas prices ... my favorite category of complaint is the "It just cost me $418 to fill up my king ranch dually urban assault truck ... Fuck Joe Biden".
Reactions: hal2kilo, Brovane, sandorski and 2 others

Pens1566 said:
Speaking of gas prices ... my favorite category of complaint is the "It just cost me $418 to fill up my king ranch dually urban assault truck ... Fuck Joe Biden".
Click to expand...

Hopefully the babysitters are raping ReTrumplicans.

Blah. I have a pair of teens that babysit together for $10/hr. I generally pay them more like $12-14, but would never pay $30. I'm sure these are pretty one off things in very high income areas.

I was looking for a sitter in Palm Springs on care.com and the prices were $20-30 for college grads with a lot of experience. Only would consider that because I need someone to watch my daughter while we do a crazy hike and $30/hr is cheaper than paying for a 4th person to vacation with us.

Pens1566 said:
Speaking of gas prices ... my favorite category of complaint is the "It just cost me $418 to fill up my king ranch dually urban assault truck ... Fuck Joe Biden".
Click to expand...

my cousin (much older...never met him) posted a thing on facebook about "marked safe from being a man-bun wearing vegan prius driver" or something along those lines. i really wanted to respond with

"prius driver marked safe from rising gas prices"
i clocked in 35mpg on my drive home from southern VA in my mazda3, and if i had the stock super-hard LRR tires, i probably could have gotten 37+. still, not bad for 150hp and max performance summer tires in the mountains.


anyway, on the topic, good for the teens if they can get paid that much.

If only Mitch McConnell had small children....
At $30 a crack, old Mitch would be passing some bill to limit what the babysitter could charge.

WOW, Mitch would say, at $30 a crack I'd rather spend the money on crack.
Reactions: Viper1j

I'm so glad I don't have to deal with this crap any more. I think $20 for a long evening out was the most we ever paid a babysitter.
Reactions: hal2kilo

Man, the free market really is a bitch.

National Conservatism (think national socialism if you're a "real American") will save us!
Reactions: iRONic and dank69

she's charging what the market will bear. why should teenagers be excluded from capitalism's finest principle?
Reactions: iRONic, Brovane, Brainonska511 and 1 other person

Fenixgoon said:
she's charging what the market will bear. why should teenagers be excluded from capitalism's finest principle?
Click to expand...

I think it's called "child labor laws". They're already excluded.

14 year olds can have jobs, with certain restrictions. They are competing fairly.
N

Why does her age have anything to do with it? She's watching the most important and most valuable thing to any family/parent, a child, a life that babysitters are 100% responsible for while the parents are out. Yet you think she shouldn't be paid that much for such responsibility.

Child labor laws has NOTHING to do with wages. It has to do with number of hours they can work, time of day they are allowed to work, and what jobs they can and can't due to the hazards involved. Some states allow paying slightly less than minimum wage to those under 16 of age.. but that doesn't' mean they have too, and that is not part of the child labor laws.

There are also some states that have set a minimum age to baby sit (12 years old usually), and some states require them to take a class prior.

It's not a salary. It's a less-than-part-time, no-benefits wage. It's not a full-time job and for some has no consistency. It's almost an on-call service, and is often a luxury service. If it was a regular thing you could reasonably bargain them down if they were asking really high. Otherwise it makes perfect sense. That $35/hr is in a resort area; she's almost certainly sitting for somebody who runs something up there. The median income in that area couldn't easily afford that on a regular basis. She also notes that she's being overpaid. The increase on the average over two years that the article listed for care.com is 23% which is ballpark in line with everything else that has gone up. It's up to $18 which is not much over the $10-12 everybody is reminiscing about from time periods long gone. The parents just throwing money at a sitter is dumb, but the kids asking for more seem to be on the mark.


Viper1j said:
In Walnut Creek, Calif., Anar Hooper, a financial-content marketer and mother of three, says that in her area, many nannies are charging $40 an hour, plus benefits. She found a high-school junior who lives next door and is charging $25 an hour. Ten years ago, when her oldest daughter was little, she paid teenage babysitters closer to $14.

10 years plus pandemic plus everybody, teens included, less willing to be exploited by cheap people equals price goes up. A shock for sure if you haven't looked in a while but not a mystery as to why.

As a teen in the Florida Keys who wasn't yet old enough for certain jobs, for awhile I was babysitting the kids in my neighborhood via group outings, mostly revolving around fishing or learning to throw cast nets. I had a trio of boys who had no older brothers and all wanted nothing to do with watching movies on a couch for hours. The three of them, plus my little brother, off in a boat chasing cuda and tarpon and I was getting $40/hr plus expenses.

Had some friends tease me for being a babysitter, but they shut up pretty fast when they saw all the new fishing gear and Maui Jims I was buying for myself. And guess who never had to worry about fuel for his boat? *two thumbs* This guy.