So something pretty interesting popped up on SisoftSandra database recently, a very large APU that has the branding of AMD’s next generation avian roadmap. Codenamed ‘Fenghuang’, this APU houses a very large number of CUs (28 to be exact) with roughly 1792 SPs making it one of the largest APUs we have seen so far. This appears to be the APU for Desktop that we know has been in the pipeline for quite a while now.

AMD Fenghuang to reign over all others, huge 28 CU APU for desktop spotted on SiSoft Sandra
AMD has always chosen very interesting nomenclatures for its products. While other semiconductor companies usually have systematic (and boring) nomenclatures based on an alphanumeric sequence AMD has always opted for naming its pet products after something real. The Avian nomenclature series is no different and while it starts from the 14nm process, it carries on into the 7nm node as well.
Fenghuang are mythological birds of East Asia that reign over all other birds according to wikipedia and this indicates the importance of the product to the company internally. The entry lists AMD Fenghuang as the primary platform and the CPU in question is a Ryzen part. There is a distinct possibility that we might actually be looking at an 8-core Zeppelin die based APU – something we have heard rumors of before. Before we get into more details however, this is the entry in the flesh:
Click to expand... 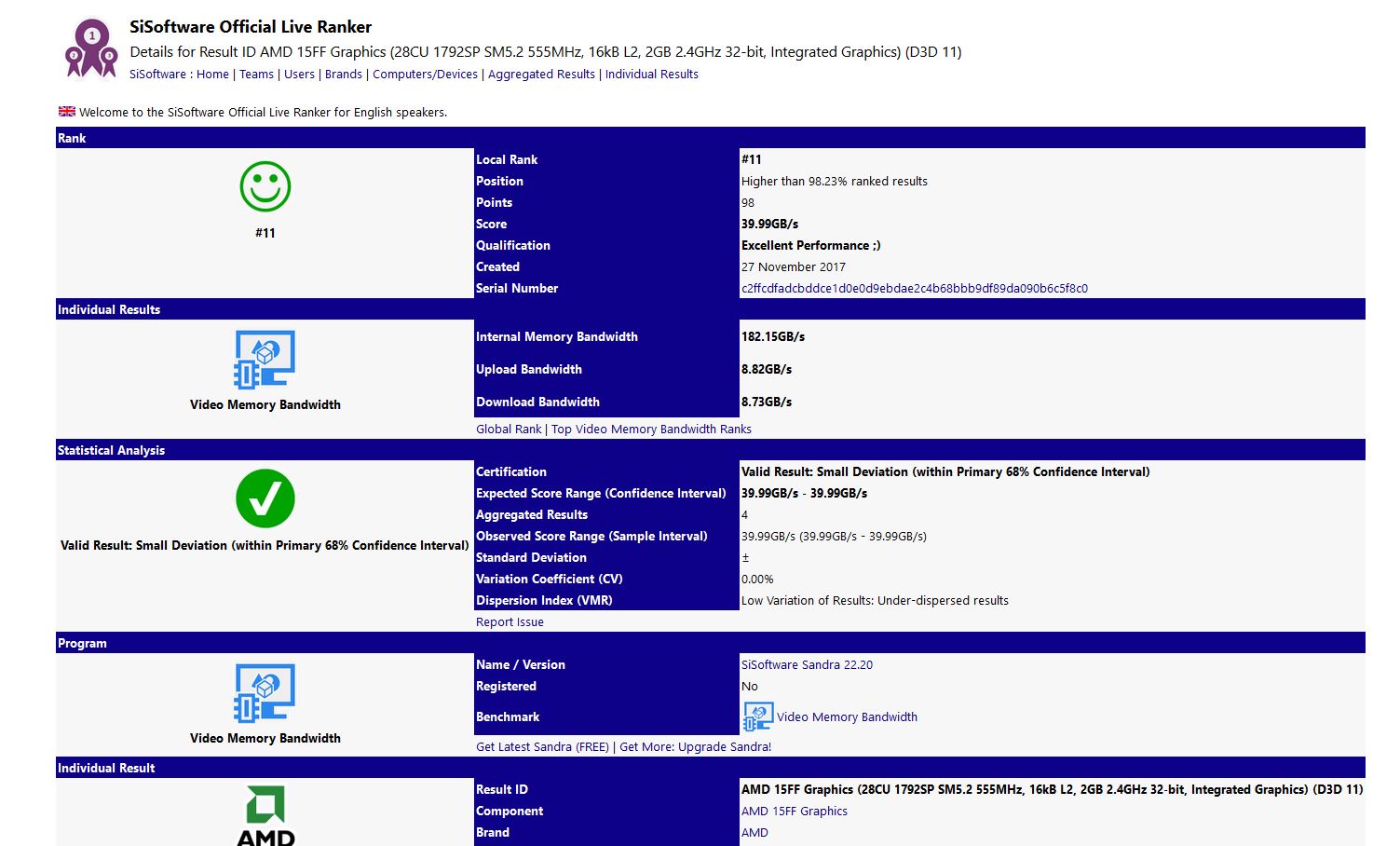 As we can see, the SP count listed is 1792, which would make it the largest APU to date. The integrated graphics portion gives away the fact that this is an APU, not to mention the fact that the “AMD Fenghuang” platform name can be seen below as well. The core clocks of the CPU side of things are slated at around 2.4 GHz, with turbo probably being around 3 GHz. The APU has a 16 kB cache and 2GB of memory (is that HBM?).

The clock speed of the GPU is currently listed at 555 Mhz, this is almost certainly a pre-launch engineering sample number and one we expect to go much higher to 700 MHz at the very least. This would mean you are looking at a theoretical peak performance of 2.5 TFLOPs. This clock speed might seem a bit on the low side but keep in mind this is an APU and one that might actually be housing a Zeppelin die along with it so the company is playing with a very small thermal envelope here.
Now there is a bit of an oddity in this spotting, and that is the memory bus width which is listed as a tiny 32 bit. This is, frankly speaking, not possible which leads us to believe that the tool might be misreading the number due to the unique construction of the APU. It is even possible that the GPU is powered by HBM memory, which would explain the confusion faced by the tool. The memory clocks listed are 2400MHz on the tool.
Click to expand...