In tandem with Cray’s Shasta disclosures, the U.S. Department of Energy (DOE) is announcing that NERSC, the National Energy Research Scientific Computing Center, has chosen a Cray Shasta supercomputer for its NERSC-9 system, slated for delivery in late 2020. Named “Perlmutter” (after Nobel Prize winner Saul Perlmutter) the system will feature AMD Epyc processors and Nvidia GPUs offering a combined peak performance of ~100 petaflops and a sustained application performance equivalent to about 3X that of the Cray Cori (NERSC-8) supercomputer. The new contract, which includes a Cray Clusterstor storage system, is worth a reported $146 million, one of the largest in Cray’s history. (We’ll be reporting additional details of the NERSC-9 system soon.)
Click to expand...

Huge win for AMD.
Reactions: .vodka, Schmide, PhonakV30 and 4 others

Wonder is that a result of all those PCIe lanes, or EYPCs performance in itself, or a mix...

Interesting that they went EPYC + Nvidia instead of POWER + Nvidia (Summit).

It'll be a truly huge win for AMD when they can convince buyers to use Vega20 instead of NV cards . . . might be a software stack-based decision though (CUDA vs OpenCL)
C 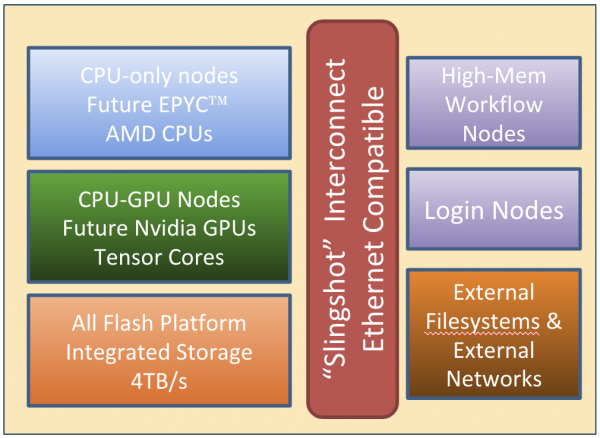 The new supercomputer will be a heterogeneous system comprising both CPU-only and GPU-accelerated cabinets. It will include a number of innovations designed to meet the diverse computational and data analysis needs of NERSC’s user base and speed their scientific productivity. That includes a new Cray system interconnect, code-named Slingshot, that is designed for data-centric computing; as well as NVIDIA GPUs with new Tensor Core technology, direct liquid cooling, and an all-flash scratch filesystem which will move data at a rate of more than 4 terabytes/sec.
Reactions: lightmanek
C


According to Nick Wright, the lead for NERSC’s Advanced Technology Group, the system will be a mix of CPU-only nodes and GPU-accelerated nodes, with more of the former than the latter. The GPUs will be sourced from NVIDIA, and will most like be the company’s next-generation Tesla offering; AMD will be providing the CPUs, presumably based on its third-generation EPYC processors (codenamed Milan). The CPU-only nodes will be dual-socket servers, while the NVIDIA-accelerated nodes will have a single CPU and four GPUs. The system will be hooked together with Cray’s Slingshot interconnect, a technology the company is introducing in conjunction with its Shasta platform.
Reactions: gdansk, lightmanek and prtskg
W

And Zen 3 is supposed to be an evolution over Zen 2, not the "revolution" that is Zen 2.