Question How fast is your browser?

Asterox said:
Well, in short this Webbench is useless garbage for use out of boredom.

Ok, but what CPU do i use does anyone have some idea.

It all depends on what browser is in use- so it is very important when testing to list the exact versions. For example, Chrome has improved massively since about 90/91 (can't remember exact when there was a big upgrade in the JS speed). That version alone improved these scores by 20%+ compared to the previous one.
Reactions: Makaveli
0

As heating season has started up again, I thought it was a good time for some practical retro computing.

Browser is not fast but usable (unlike my Kindle fire gen5 quadcore acorn, which scored ), at 18 == 3x the speed of the kindle. The score of 18 is likely comparable to what I'd expect from a 6W Stoney ridge. Ok to check email and basic browsing.

Pentium D started as dual MCM Pentium 4 single core dies (90nm, on an architecture that was designed and shrunk from 130nm process). See hyperlink above for some interesting history. Second gen Pentium D, like the one packed in my super small SFF box used 65nm, and did away with the MCM, putting the two cores on the same die.

I'm guessing the browser performance of this could be improved by a decent % by trying this benchmark again, but on a 32-bit OS and browser.

The P4 architecture is 64-bit compatible (unlike the initial core designs, like the C2D). 64-bit compatibility and higher clock speeds are one of the big advantages over the the C2D that succeeded this era of design. However, though it was 64-bit compatible, I believe priority was given to optimize 32-bit performance, which is why there might** be a performance handycap. ( ** 'might'; to be tested.)

Other interesting tidbits are some interesting novel design elements that they experimented with double pumped ALUs---which is why this little SFF is good as an under the desk space heater / foot warmer.


amd6502 said:
I get a score of under 6 with Chrome on my Kindle Fire, which uses a low powered acorn quadcore. I suspect the cores might be in-order execution. The IPC feels lower than anything I've seen. Even a P4 will probably run circles around it.
Click to expand...

john3850 said:
Joe That sure is a nice score from that new Intel.
Click to expand...

It damn sure is! Color me suprised, i was not expecting an advance that far.

Surprised, that Alder Lake S beats Apple in their own benchmark. Kudos to Intel 👍🏻 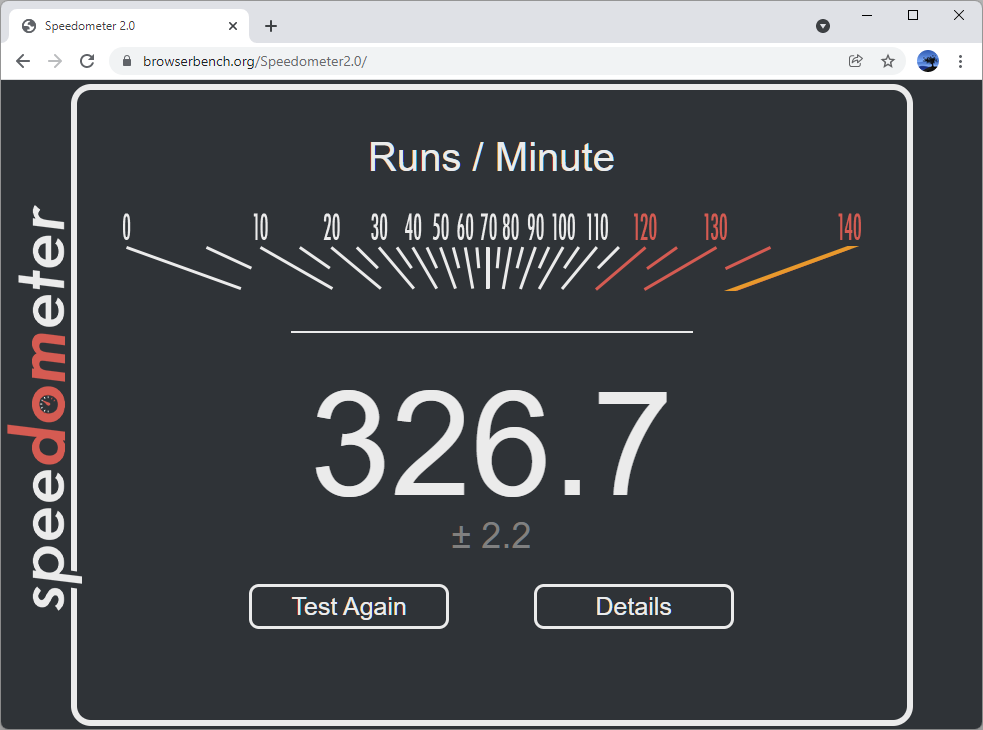 Reactions: lightmanek, Harry_Wild, Makaveli and 2 others
0

Improvements for netburst going to Firefox 32-bit were less than I expected, but it did help a little. I got a score of 19.1 after installing 32-bit BSD unix and retesting firefox on 32-bit.

I got further improvements (surprisingly slight ones, +0.2) by choosing 2-thread processes over the default 8 thread.

** I have turbo boost disabled on my FX system as I want to maximize remaining lifetime of this 760g board. (This system runs at full load all the time during heating season, thanks to BOINC, and 760g's really stress the limited set of mosfets in the VRM of such low end boards); because of its good L3, my FX also gets bottom of barrel DDR3 1333 with slow CAS timing)

I think my 2500u laptop scores somewhat below my FX's Brave score, when tested with Firefox, @ 47 .

I just retested today with recent release of google chrome, and it is dramatically faster than Firfox ESR on the 2500u at a whopping 108 !! (indeed, I think even very different version numbers of chrome will produce different numbers, and even setting like whether you enable hardware acceleration):

It's really incredible how optimized Chrome is. One could probably put together a nice 64-bit chrome browsing station with an old Phenom tri or quadcore, or even a bottom end station with a dual core K10 era Athlon (maybe even k8 dual core?).

I'm guessing 32-bit Chrome is no longer supported/updated. For anyone running a 32-bit CPU like C2D (including abandoned macbook users) I highly recommend 32-bit BSD unix + Firefox, which are noble holdouts for 32-bit support. Even though Firefox is not as optimized, it's still plenty responsive for cores like C2D, and even Pentium D for most webpages and not too many open tabs.
Last edited: Nov 30, 2021
Reactions: Magic Carpet and moinmoin
0
T

It is ironic that Chrome is now significantly faster than Safari in this benchmark.

Running the latest Chrome on an M1 mac scores 290. I checked powermetrics and running this benchmark peaks at 5W for package power on the SOC.

Now after seeing JoeRambo and AdamK47 scores I would not go with 9900k which will only do 215 on this test I would go with a Alder Lake with the faster IPC.
Reactions: Magic Carpet
0
J

Seems Chrome still has edge in this test, despite being on same Chromium engine:
Peak ADL run 5.3/5.0 no HT with highly tuned mem:

IF ADL had as tight DDR4 controller as Comet Lake, it would perform at least 5% better over what it does now at same speeds.
Reactions: igor_kavinski, Magic Carpet, Det0x and 3 others
0

Think this is a new Zen3 record atleast

Have a macbook air m2 now and have re-run with the latest browsers. Safari is now back on top:

The speed has increased alot with the newer versions of these browsers.

281 at 45% battery, unplugged, YouTube and pdf reader in background

That sure is a Apple killer.
Reactions: lightmanek
0