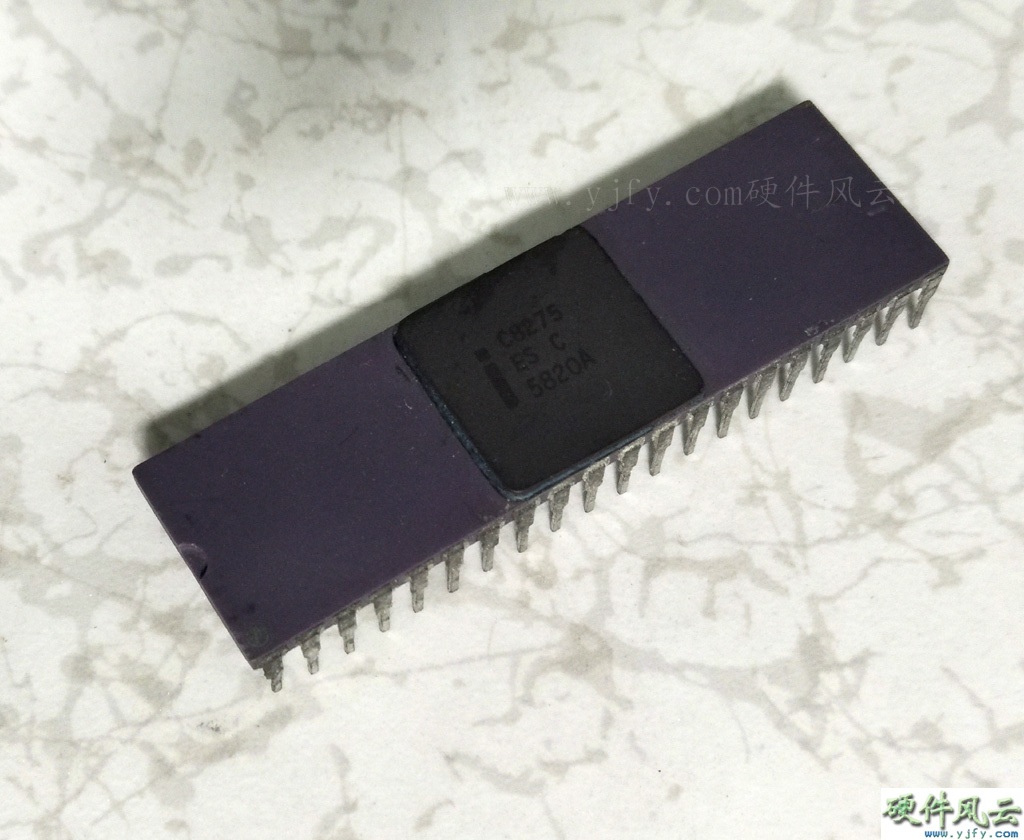 Pictured above is Intel's first display-related chip C8275 CRT Controller, which is an engineering sample chip with a date of 7735, indicating that the C8275 chip first appeared in the 35th week of 77 (late mid-August). Used in Intel's iSBX270 VIDEO DISPLAY CONTROLLER MULTIMODULE Board. The iSBX 270 VDC contains 4K bytes of high speed static RAM. 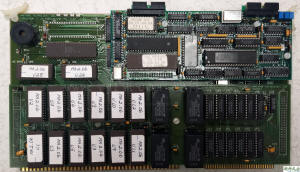 ​
The iSBX270 was well-known in the past and was also used on the Processor II 2217605132 Multibus card from non-intel Machine Technology Inc. 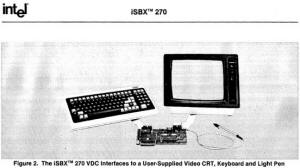 Some people think that the iSBX275 is INTEL's first graphics card. Perhaps this view is from Intel Corporation annual report 1982:“The 82720 Graphics Display Controller enhances both development and execution speed of color graphics applications, making high quality color graphics affordable for general purpose business systems. It is the first in Intel's family of high-performance CRT controllers.”
In 1981, after entering the PC era, intel did not immediately intervene in the field of PC graphics. Because Intel's main business is CPU, and Intel Single Board Computers an important task is to test and evaluate the CPU.
iSBC 86 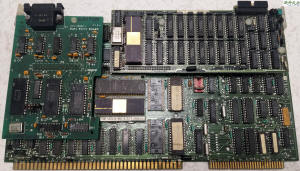 NEC started the 7220 project in 1979 and released μPD7220 in 1981.NEC’s µPD7220 was the first integrated graphics controller chip.The chip aincorporated all the CRT control functions (known as the CRTC) as well as graphics primitives for arcs, lines, circles and special characters.At that time, the μPD7220 was very advanced. Intel was used to improve the display performance of the system. The μPD7220 directly cloned NEC was 82720.Announced in 1982, it was the first of what would become a long line of Intel graphics processing units. 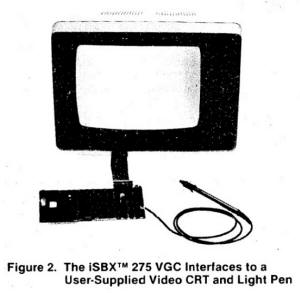 1.3 82730 Chip
In 1982, Intel introduced the 82730 chip. The Intel System Development Kit SDK-186 has 82730 chips. 82730 chip is Text coprocessor:Supports high-quality text displays with proportional spacing, subscript/superscript, character attributes, etc.Supports high-quality graphics with manipulation and display of bitmap strings.
The picture above shows the C82730 chip used on the REGNECENTRALEN RC759 PICCOLINE computer. Intel 80186 (or 80186) is Intel's embedded market for industrial control/communication. It is very rare for PCs like this, let alone the 82730 chip application. 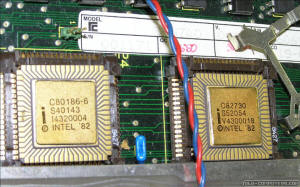 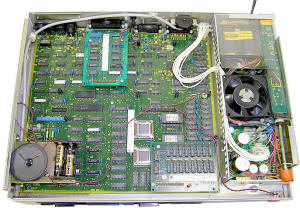 1.4 82716 Chip
The 82716 chip appeared in 1984.It is a video storage and display device. It is a low cost, highly integrated video controller. It displays texts and graphics. It can manage upto 16 display objects on the screen at any time. It can select upto 16 colours from a range of 4096.It contains on-chip DRAM controller and on-chip D/A converters. It can support upto 512 KB of display memory. It is compatible with 8.and 16-bit microprocessors and microcontrollers.
I have not seen the graphics card of the 82716 chip, maybe it is used on professional equipment. 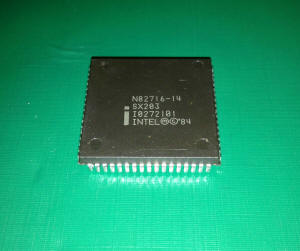 1.5 82786 Chip
In 1986, Intel introduced the 82786 chip, the first discrete graphics coprocessor. The 82786 integrates a graphics processor, a display processor with a CRT controller, a bus interface unit (BIU), and its DRAM/VRAM controller. Support 4 MB of DRAM / VRAM memory. Supporting up to 256 colors, systems with multiple 82786 designs can support virtually unlimited colors and resolutions.
The 82786 chip is used in the iSBX279 of the Intel Single Board Computers system.


The A82786 chip has also been produced by many manufacturers, such as the NUMBER NINE Pepper graphics card of the ISA interface of the PC system.

It is a CHMOS graphics coprocessor. It is compatible with all Intel microprocesors. It can support multiple graphics applications from multiple graphics bitmaps. It has high speed character drawing, fast polygon and line drawing capability. It can support upto 200 MHZ CRTs. It provides upto 256 simultaneous colours. It contains DRAM/VRAM controller for graphics memory upto 4 MB. It contains shift registers and DMA channels. It is a powerful device developed for microcomputer applications including PCs, engineering workstations, terminals and laser printers. High integration makes it cost-effective.
Last edited: Jul 8, 2020
0
Y

1.6 i750 Chip
Intel's i750 chip consists of i750PA (82750PA pixel processor) and i750DA (82750DA display processor). The technical parameters are:The 82750PA is a 25 MHz wide instruction processor that generates and manipulates pixels. When paired with its companion chip, the 82750DA, and used to implement a DVI Technology video subsystem, the 82750PA provides real time (30 images/sec) pixel processing, real time video compression, interactive motion video playback and real time video effects.
Intel's i750PA/DA chip was made in December 1986. The i750 design is so advanced that it is only viewed by DVI Technology (Digital Video Interactive), with the DVI (Digital Video Interactive) concept (all digital sound, text, graphics processing system, can support a variety of multimedia information sources and information formats.) Developed a DVI Pro 750 graphics card. Intel is optimistic about this concept and is more optimistic about the development prospects of digital multimedia technology. On November 14, 1988, it acquired the pioneer of digital media DVI Technology.
The picture below shows the main card of the DVI/intel Pro 750 graphics card. The full set has 3 ISA interface boards and 3 daughter cards. 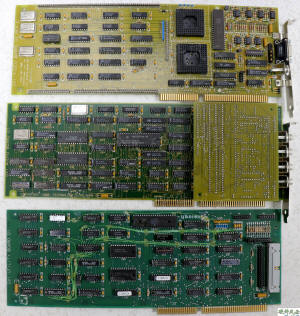 In my collection of DVI/intel Pro 750 engineering samples, the date is the Utility card and the PCB date is 8809. Explain that in March of the same year, DVI has produced the Pro 750 prototype card, but it was not officially released by INTEL and Microsoft until July 21, 1989.
Last edited: Feb 11, 2020
0
Y 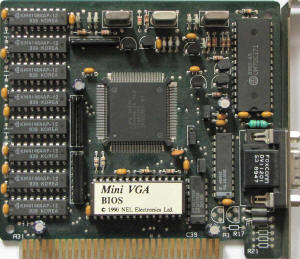 1.8 82706 Chip
Intel launched 82706 in 1988. It is an Intel video graphics array(VGA)compatible display controller for IBM PC/XT/AT and PS/. All video monitors developed for IBM PS/2 system are provided with VGA controller. The 82706 can support 256 KB video memory. It is designed to be compatible with 80286 and 80386 and other microprocessors. It has EGA/CGA/MDA BIOS compatibility. It acts as CRT controller and video memory controller.
Hercules VGA card is made by Hercules with this chip.

1.9 i860 Chip
On February 27, 1989, Intel launched the i860. At that time, i860 was the most advanced 64 bit microprocessor, adopting RISC design technology, which was a general-purpose high-performance microprocessor. It integrates the core components of integer RISC, floating-point processing, page memory management, instruction cache, data cache and 3D image processing into a VLSI microprocessor. In short, i860 is like core I3 / i5 in 20 years. Advanced design leads to its high price, and its graphics card only appears in the high-end professional field.

2. The first fledgling (1989-1996)
I introduced the i750 chip in the previous section. After Intel acquired DVI, the DVI Pro750 graphics card was renamed Intel Pro750. However, INTEL is very dissatisfied with the design of the PRO 750 graphics card, and re-developed the ACTIONMEDIA series of graphics cards, thus officially entering the field of PC graphics.
The Intel i750 graphics card project lasted for 6 years and it is obvious that it is doing its best. In order to expand the impact, even with the PC giant IBM. Unfortunately, in the era of the heroes, Intel's efforts still have no breakthroughs, gradually disappeared. So senior hardware enthusiasts only think that Intel's first graphics card starts with the i740 chip...

2.1.1 ACTIONMEDIA 750 Prototype Card DS1AT
In March 1987, a chip evaluation board for the i750 chip, codenamed Tower, was made.The i750 product evaluation board DS1 was not developed until 1989.The CS1 Delivery Board is matched with the DS1Capture Board.
DS1-AT is the ISA interface version prototype card. This board is missing the original i750 chip, specially purchased the Intel i750PA/DA chip, and the other two are missing VLSI VTG8001/8002. 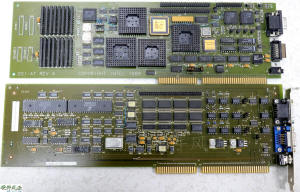 The board below is a blank PROTOTYPE board without a chip.Also very rare.
DS1-AT PCB Board

2.1.2 ACTIONMEDIA 750 ISA Version Engineering Sample
The ACTIONMEDIA 750 attracted widespread attention after its display at the COMDEX/Fall '89 show from November 13 to 17, 1989. 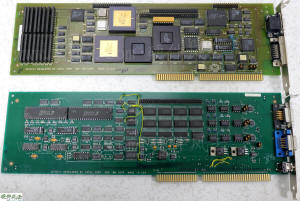 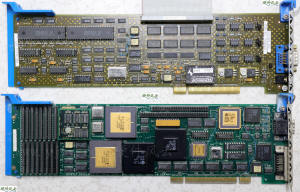 The picture below shows the boxed ACTIONMEDIA 750, with a lot of floppy disks, CDs and manuals attached. 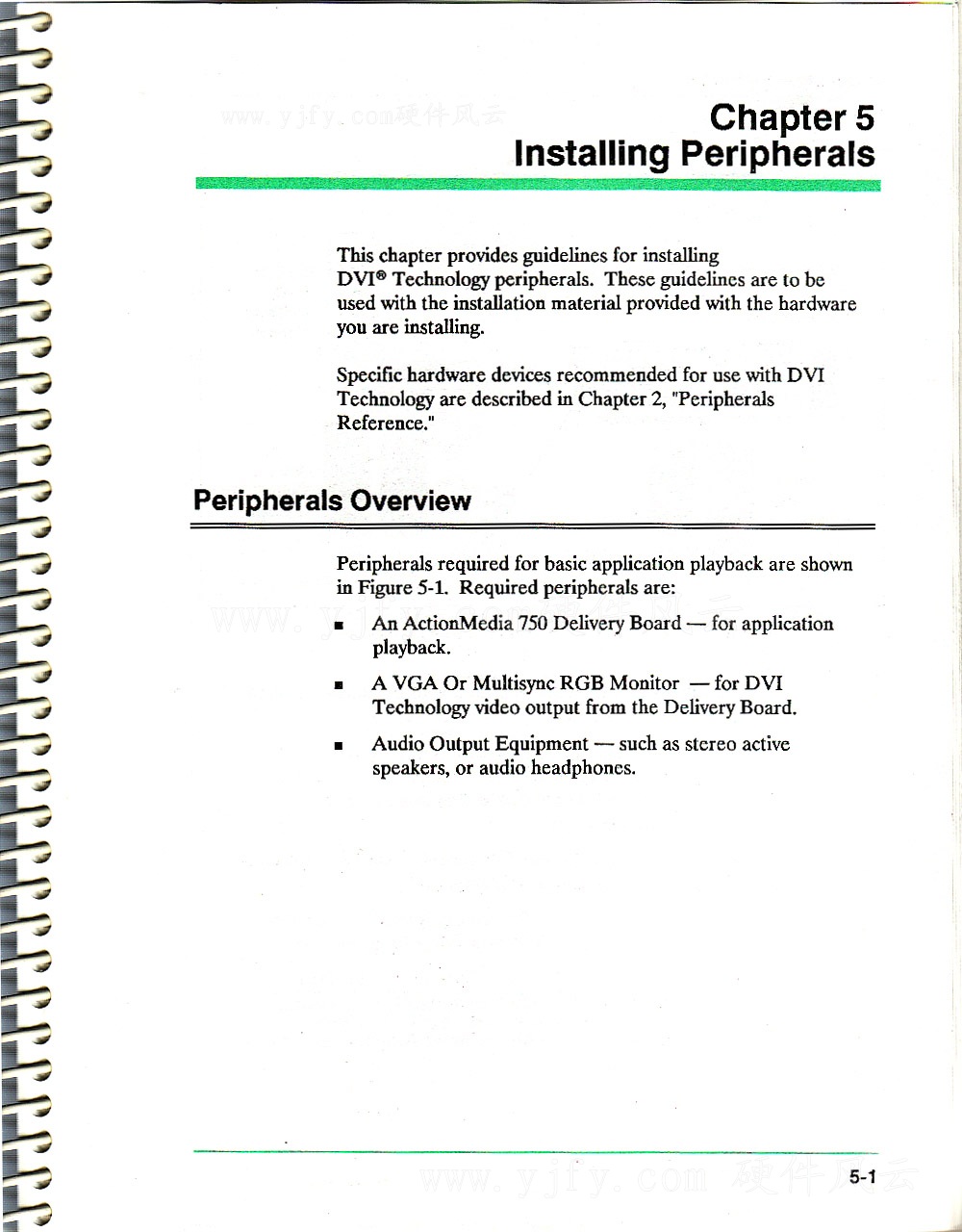 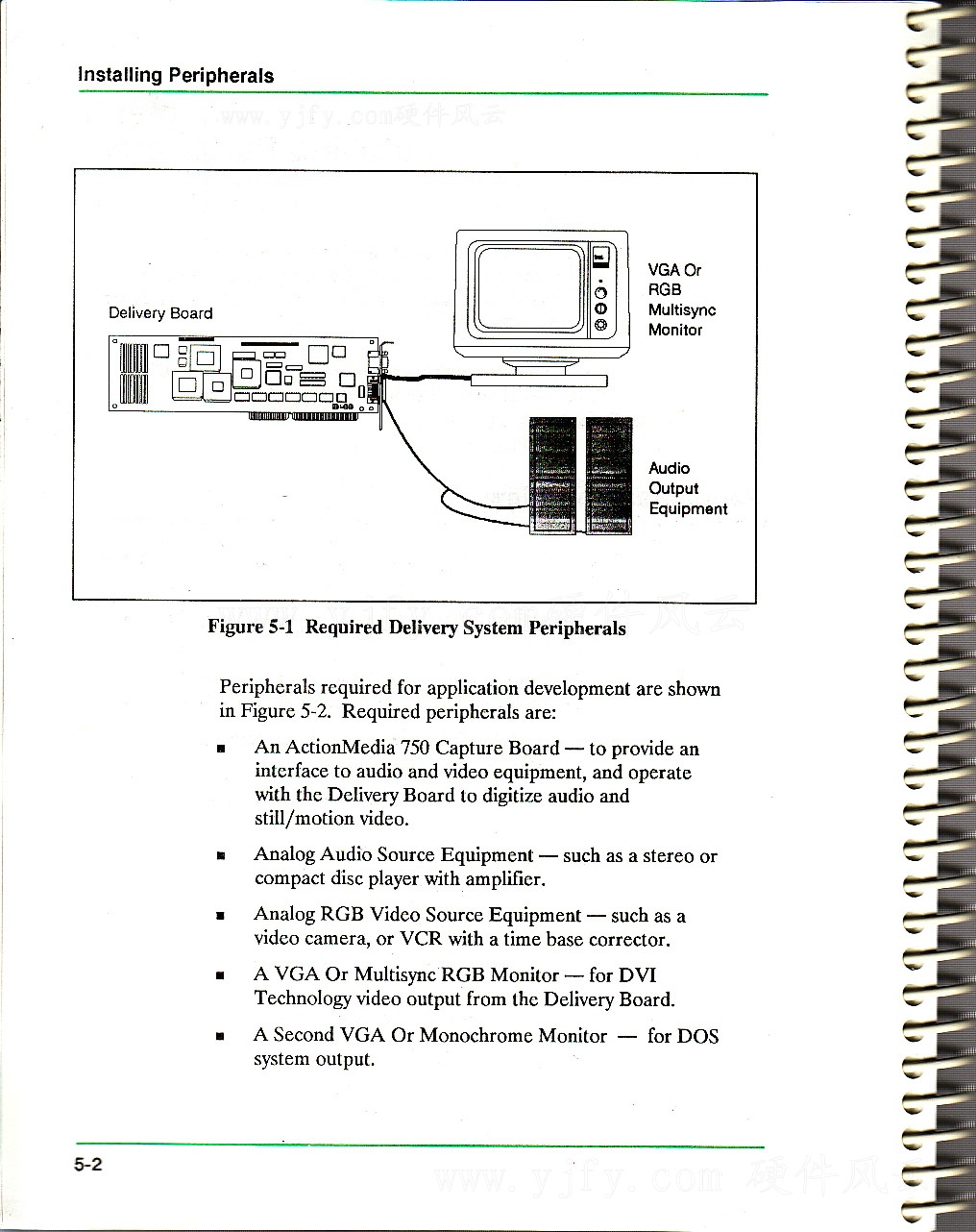 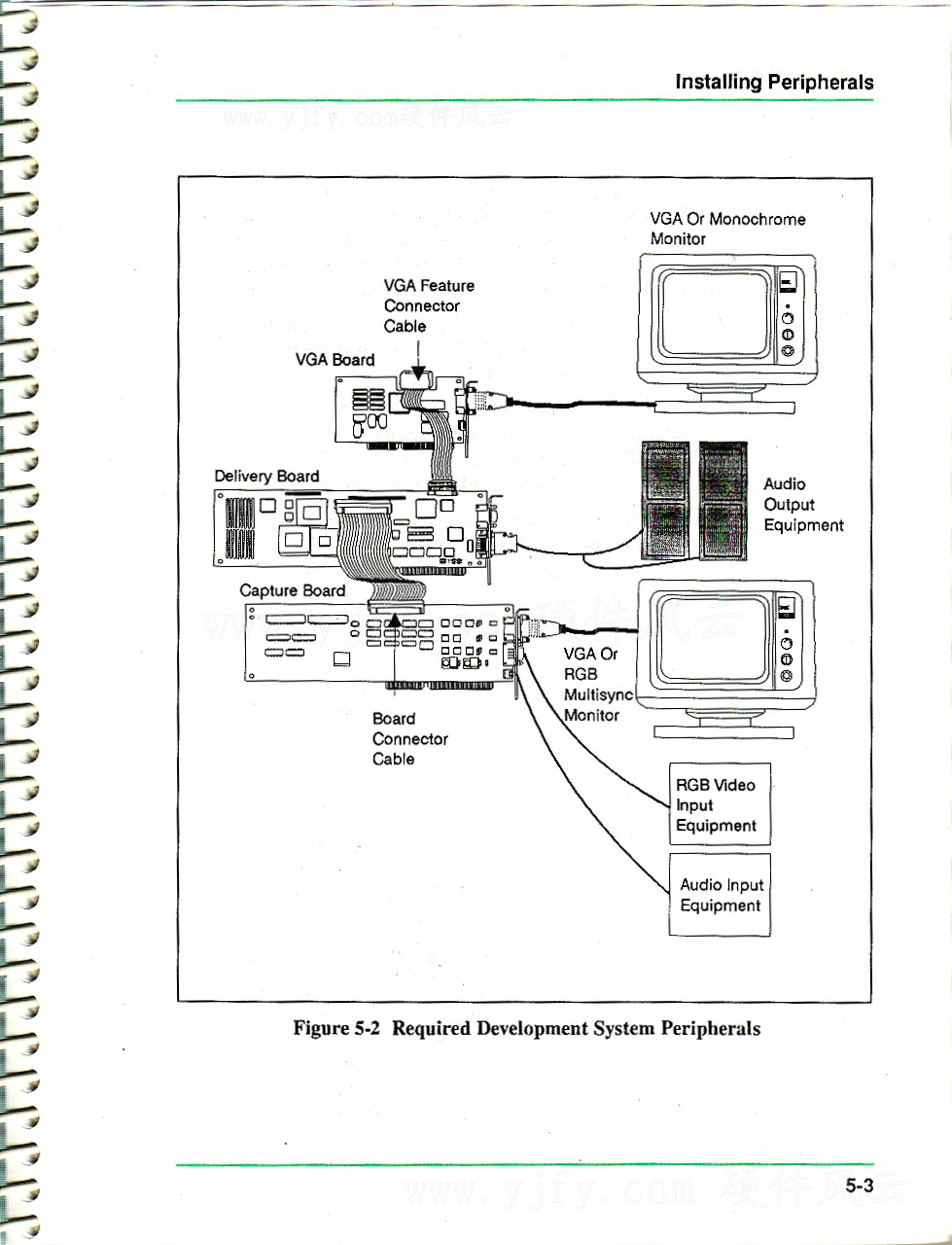 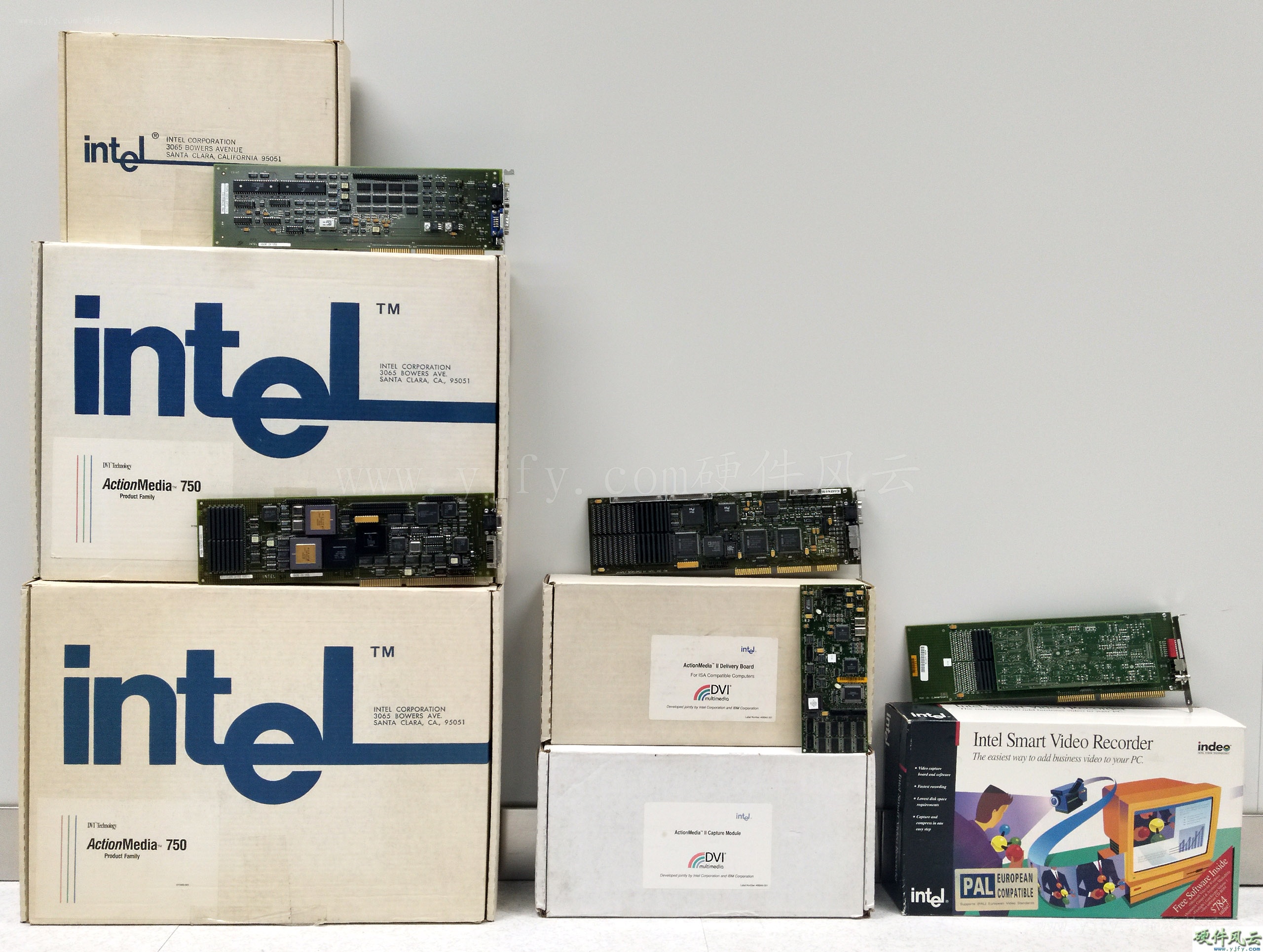 2.2 ACTIONMEDIA II Series Graphics Card
In the late 1980s, the patch manufacturing process of the board was mature, and intel was naturally the leader. The i750PA/DA chip of the PGA pin structure is upgraded to the i750PB/DB chip of the PQFP chip structure, and the chip package is changed from a gold seal to a plastic package.

2.2.1 INTEGRATOR Chip Evaluation board
Based on the mature design of the previous generation, the chip evaluation board INTEGRATOR was developed. So the INTEGRATOR looks like the ACTIONMEDIA 750 DVI for the replace chip, or the CS1 card.

The ISA interface version of the detachable Chip Evaluation board INTEGRATOR's two i750PB/DB chips are ES. 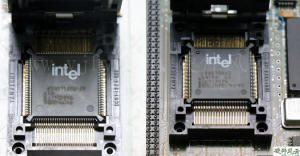 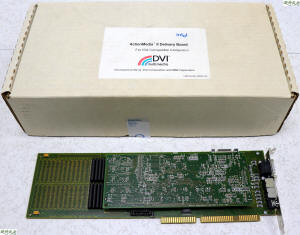 QUARK's REV 2 version compared with the above REV 1 version, QUARK's REV 2 version of the chip evaluation board is about one-third wider than the REV 1 version of the standard ISA full-length board, the extra place is loaded two One function, one on the right, is the function chip evaluation board area of the daughter card, and the function of the daughter card is directly extended on the main card. As the integration level is improved and the memory is processed in two slots, the ISA interface master card has enough functions to directly accommodate the daughter card, and the daughter card function can be cut by the empty soldering。
Chip evaluation board QUARK 2.5 chip in order i750PB, i750DB, F122164PPM and TC160G54ES, this TC160G54ES chip is very special, Intel not only set a PGA chip socket on the graphics card, but also equipped with a DVI THUMPER secondary card to deploy. This interface has not been made on the QUARK 2.5 graphics card, but the above socket can be indirectly debugged using Altera's EPM7192GC160-1 PGA chip that has been processed by the DVI THUMPER secondary card. 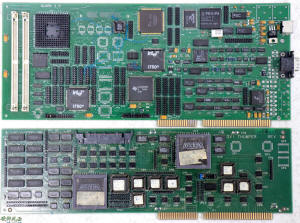 The i750 chip project began in 1986 with the i750PA/DA chip, and finally the 1993 i750PD chip, which lasted 8 years. The i750 chip was undoubtedly excellent at the beginning of its birth. Intel did not update or replace the PCI interface. In the latter stage, its excellent performance index became a congenital deficiency. In the end, it had no potential to be dug and had to end. The 2D graphics project of Intel's i750 chip is also finished. This was followed by the development of video cards.
Last edited: Feb 11, 2020
0
Y

2.4 i750PD Chip
ACTIONMEDIA III did not routinely develop the i750's third-generation i750PC/DC chip, resulting in the vacancy of the i750PC/DC numbering chip. The fourth generation is the i750PD (Video Compression Processor) chip.
On November 15, 1993, ATI announced the Video basic capture card, which uses Intel's low-cost i750PD and ATI's ATI-68890 video capture chip. The chip below shows the ATI Video basic capture card is ES, the chip is labeled KU8270PD-25, it seems to be marked incorrectly, it should be KU82750PD-25.

2.5 MAESTRO series
The late stage of the i750 chip graphics project,lintel did not completely abandon the research and development of the i750 chip follow-up products, turned to simplified functions, low-cost video daughter cards and committed to selling i750 series chips to large companies such as ATI and Creative. 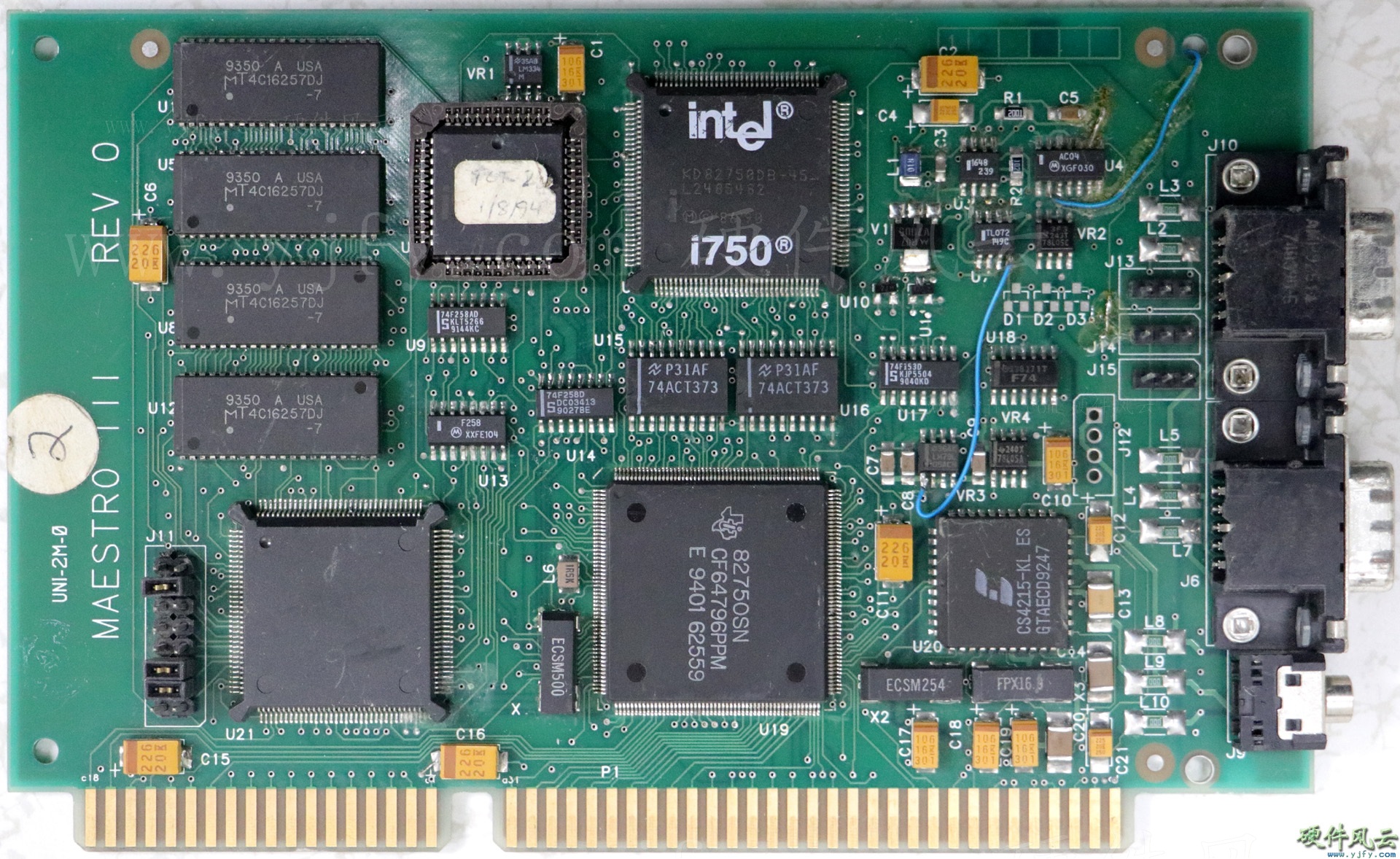 The MAESTRO III card has i750DB, i750SN and a chip without any label. This chip without any standard should be the next generation chip, because at this time Intel can not make the i750PB into a wordless version of ES. The i750SN chip should be the F122164PPM on the QUARK chip board.As can be seen from the date of the components used on the card, the i750PE chip was made in early 1994. For some reason, the final product of such a card structure has not been seen, or only the i750PE chip is evaluated, and the chip is prepared for the Smart video Recorder series.
Last edited: Feb 11, 2020
0
Y 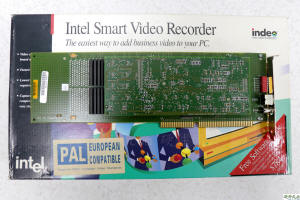 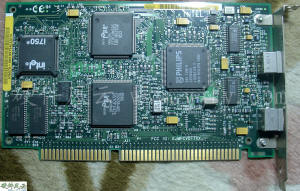 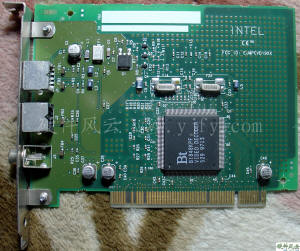 Intel's first-generation graphics project began in 1989 with ACTIONMEDIA, and finally in 1996 the Smart Video Recorder III, which lasted eight years. Because the products are rarely seen on personal computers, their popularity is so low that they are forgotten.
0
Y

Although Intel did not launch a display chip based on the PCI interface, there are still some PCI graphics cards related to Intel.