Help me pick my next TV

My old Plasma redacted the bed finally. I believe it's a 55'' Panasonic, so I am looking for the same, if not maybe a little bigger in size. I don't really know if I want/need OLED, QLED...ULED???? How many LED's are there?

It will be used almost entirely to watch movies or short Youtube video (mostly animated stuff for my kids) but also some random stuff for my wife and I. Light scenarios vary... the room can be very bright, with direct sunlight hitting the display, or very dark (night). It won't really be used for gaming. Not sure if I need "smart" features, as we pretty much just use the Chromecast or stream to the device from our phones.

Im leaning this Hisense U8G because it's had good reviews and is much less $$ than Q/OLED competitors. 2nd choice would be the Sony C1 OLED.


No profanity allowed in the tech forums.


esquared
Anandtech Forum Director
Last edited by a moderator: May 1, 2022

Im leaning this Hisense U8G because it's had good reviews and is much less $$ than Q/OLED competitors. 2nd choice would be the Sony C1 OLED.
Click to expand...

Your link is to an LG C1, a very good TV from 2021. The equivalent Sony unit is the A80J. Both of these have been fairly highly reviewed as two of the best TVs from 2021 with the LG taking the lead if used for gaming.

Get the Hisense if you are budget limited and don't care about black levels or viewing angle or if brightness is your primary concern.

Personally, I have the LG C1 and it is incredibly good and I do use it in a bright room without significant issue, though direct sunlight will wash it out. At the time I was shopping Sony was significantly more costly. Both tv's go through pricing cycles that have them fairly close to the same currently.

I wouldn't touch hisense with a 10 foot pole. My last hisense was buggy, crashed over and over even while soft-off, then died just outside the warranty period. Their customer service was a joke as well, so it was basically just money/time/frustration thrown in the toilet.

Hisense doesn't want to put forth the effort to debug their android OS. It's cheaper for a reason. Reviewers don't have to live with something longer than the day they review it!

My best advice: Get the most Samsung that fits the budget, whether that be size or specs, unless you place high priority on 3rd party android apps then get another major brand that properly debugs their android releases.

Reviews... meh they don't mean squat to me, I mean they are looking at hundreds of TVs and trying to make mountains out of molehills in visual quality. They are useful within the context of what they are doing, and testing, but not so much the real world needs of most people which is just does it do what it's supposed to, not get laggy after it's been plugging in for a while, and not die prematurely.
Last edited: May 3, 2022
Reactions: deustroop
L

My buddy has a $2000 OLED. His is nicer but not 7x nicer IMHO. Also ours might last longer since OLED degrades over time.

My buddy has a $2000 OLED. His is nicer but not 7x nicer IMHO. Also ours might last longer since OLED degrades over time.
Click to expand...

I feel like most things in life, especially tech, is subject to law of diminishing returns. I would like a quality piece that can last at least 15yrs without crashing on me. Like the guy above said, I do worry about what these companies do to cut costs in order to sell for 50% off. I understand Sony, etc. will command a price premium for their brand name but I would hope the brand built the rep on quality parts.

Last Samsung I bought was very reasonably priced (about 1/3rd off) as a refurb from Walmart... if there was something wrong initially, I could have dropped it off at a local B&M store instead of troubleshooting and return hassles. If there's something wrong later (within the 1 yr warranty, same as new as this wasn't a high end set with a longer warranty), Samsung has In-Home service (in most populated areas) for TVs 42" or larger (this may only be true for manufacturer refurbished, YMMV if some random site calls a used set, "refurbished", by someone else).

The funny thing is, I recall years ago, I bought some nearly free after rebate Samsung laser printer and it was the same thing, on-site service even for that low end printer. The problem was just a bad cartridge but they sent a tech out who brought a cart and made sure it worked right. I'm sure the tech got paid more that day than the printer cost me, and I ended up with a full retail (capacity) cart instead of the 1K page starter cart too, lol.
Last edited: May 3, 2022

Wait, and take a look at the Samsung S95B QD OLED TV. It's $2100 for a 55 inch, which might be out of your price range, however it should push down the price of the LG C1 & C2 OLED sets.
Oh and stay far away from anything Hisense.
L

z1ggy said:
I do worry about what these companies do to cut costs
Click to expand...

My theory is that only a few companies actually make the panels. After they are made they are graded and companies like Apple buy the best displays with no defects. Cheaper TVs get perhaps the same exact type of panel but a lower grade with defects like dead pixels.

At 720p a dead or stuck pixel is a disaster that sticks out like a sore thumb but at 4k you can't see dead pixels at a normal viewing distance. I'm sure our 4k Septre has defects but I don't care because I can't see them.

^ Dead or stuck pixels are very easy to see if you look for them. I always run various test and calibration images when I get a new set and it's the first thing I check for. Once I bought an el-cheapo Sceptre 4K that had none, BUT that wasn't even a true 4K set, rather 3K RGBW so was immediately returned. I had a cheap Seiki 4K that also had no dead or stuck pixels, and a cheap Hisense had none either.

Just thought - I guess I should call my town muni but how does one normally toss a 55''+ TV? I can't leave it at the curb.
I

z1ggy said:
Im leaning this Hisense U8G because it's had good reviews and is much less $$ than Q/OLED competitors.
Click to expand... 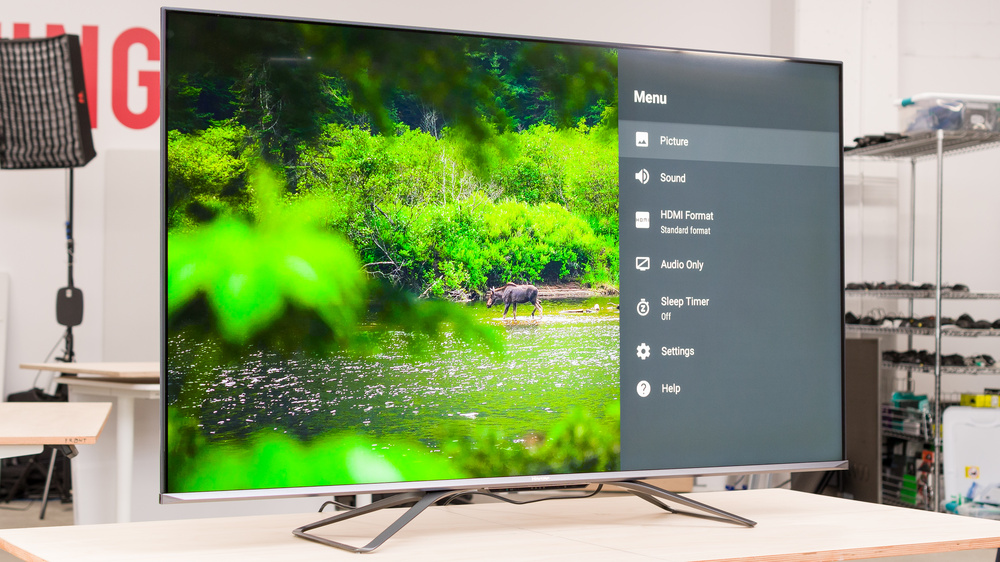 RTINGS's review is pretty favorable. OLED is obviously going to be superior in black scenes but if you want that extra punch with very bright highlights, you won't get it with OLED as it is unable to break the 1000 nits barrier.

If you can get the Hisense with additional warranty and it still costs less than an OLED, it might be a good option for you.
I

Gone from Amazon but available at BestBuy now for $50 less: https://www.bestbuy.com/site/hisense-55-class-u8g-series-quantum-4k-uled-android-tv/6455173.p

I would avoid OLED for the simple reason that you stated that the room can be very bright with direct sunlight hitting the screen. OLED is completely washed out in that environment and not good. I would recommend the Sony 4k X95K Mini-LED 65" model, or the Samsung 4k QN90B 65".

"My best advice: Get the most Samsung that fits the budget.: ++

z1ggy said:
Just thought - I guess I should call my town muni but how does one normally toss a 55''+ TV? I can't leave it at the curb.
Click to expand...

You can leave it at the curb. Do so a day or two before trash collection and be amazed how quickly it disappears before trash day....

Some areas have free recycling of such items, others have recyclers who charge a fee if nobody will take the TV from the curb since the garbage man usually won't - as it is illegal in many areas to put the TV in the dump.
You must log in or register to reply here.
Share:
Facebook Twitter Reddit Tumblr WhatsApp Email Link