Question File xfer speeds internal and to a NAS

CPU during this shows about 6% used, disc about 10 to 40% with mostly at 10 only spiking a few times per second. Gbe wired ethernet is also spiky and reflects the data rate above for each of the NAS units and apparently the limiting factor, but compared to internal speed, not by that much. I recall the speed with a USB 3.0 to Sata adapter as about the same as the other internal rates.
0

I assume that you meant to write MB/sec (MegaByte/sec), rather than Mb/sec (Megabit/sec). Because if you didn't, something is wrong with your setup. (Win10 Copy Dialog shows MB/sec.)

Edit: But yeah, those IX2-DL units don't transfer at the maximum speed of a 1Gbit/sec ethernet/LAN connection. They're just not quite powerful enough.

I posted actual screenshots of the Win10 copy dialog, to/from the IX2-DL, with 5400RPM Hitachi CoolSpin 2TB HDDs, with a PC using a RAID-0 of 1TB Intel 660p NVMe SSDs (1800MB/sec per drive, so nearly twice that, is my local drive bandwidth).

I get similar numbers (in MB/sec) to your results.
0
M

Makes me somewhat discount the notion that 10Gbe is essential, doubtful it would do anything without more cpu power in the NAS and even then it would be incremental, not amazing.

BTW not grousing, other than bulk moves like what I am doing right now, and later on mirror backups of the NAS units, the speed is actually not a factor. It "might" be close playing back a UHD 4k from the Ix2, but my long term plan is that IX2 will just mirror the PX4 which will serve the home clients.
0

mikeford said:
Makes me somewhat discount the notion that 10Gbe is essential,
Click to expand...

im sorry 10gbe for large file transfers is ESSENTIAL.
This is my Theoretical CAP on my 10GBe transfer from 1 pc to another pc both using a RAM DISK. 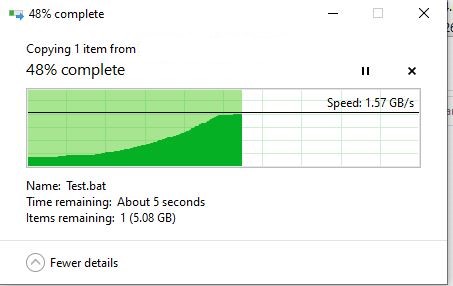 and yes thats BYTES and not BITS

This is what it normally does when transferring a blueray RIP to my FreeNAS. (8 x 12TB HGST He drives in Raid-Z2)

You could not pull me off 10Gbe, as it has what i feel is an acceptable price ratio to its switches.
My 8 port 10gbe switch costed 244 dollars and does not SCREAM because its passive.

Also 10Gbe SFP+ nic cards are fairly cheap if you get them refurbished on EBAY.


I am a heavy supporter of 10GBe.
I know Larry is a supporter of 2.5Gbe, and well i sort of support that as well, if your distance is large, and you can not run a CAT6+ cable.
But otherwise i tell people don't even bother with anything lower then 10gbe if your going for a network upgrade.
It just does not make sense.
0

aigomorla said:
I am a heavy supporter of 10GBe.
I know Larry is a supporter of 2.5Gbe, and well i sort of support that as well, if your distance is large, and you can not run a CAT6+ cable.
But otherwise i tell people don't even bother with anything lower then 10gbe if your going for a network upgrade.
It just does not make sense.
Click to expand...

Actually, I agree with you, and I will be going 10GBase-T at my earliest opportunity, on my client PCs. The problem that I have, is that my NAS units top out at 2.5GbE-T.
0
M

My SSD internal to another internal drive rarely exceeds 100 MB/s (except a burst for the first 400 or so MB), why would this materially improve going to a network location?

mikeford said:
My SSD internal to another internal drive rarely exceeds 100 MB/s (except a burst for the first 400 or so MB),
Click to expand...

this does not sound right.
what board chipset are you running?

i have seen sustained 200mb/s from internal to usb3.1 even.
I am assuming were still transfering large movie files and not many small byte files.
0
M

Cleaning sorting old drives, yes many large movie files as well as TB chunks of mixed files, which drop to much lower speeds with small files. Part of the time I was moving files from an old 2TB WD red via USB3/sata cable.
0

VirtualLarry said:
Actually, I agree with you, and I will be going 10GBase-T at my earliest opportunity, on my client PCs. The problem that I have, is that my NAS units top out at 2.5GbE-T.
Click to expand...

Just make sure you get a multi-gig switch so that the 2.5/5/10 devices can work together. I started with 10Gbase-T and didn't consider the other variations at the time. My htpc came with a built in 2.5GB adapter and also got a USB-C for my laptop and realized they would fall back to 1Gbe. So now I'm the proud owner of a 10Gbe and a multi-gigabit switch that are trunked together.
0
M

Moving a lot more files today, mostly movies GB or larger, difference in the two NAS units is stark, the IX2 never exceeds 45MB/s long term, and the PX4 is routinely around 85MB/s.

OTOH other than doing what I am right now, sorting a few hundred big media files and putting them on both of the NAS units from the internal drive, it won't be an issue. It does slightly bump up my thinking about getting a second or even third PX4.
0
R

Ranulf said:
Crazy notions. Older NAS boxes with drives in jbod are slow, often slower than usb 3.0 external hd. I picked up a Qnap 2 drive unit for around $100 back in 2014/15 era and it barely broke 60 MB/s on transfers in jbod.
Click to expand...

i think this had to do with cpu being limited.
I know the same case can be said on 10gbe networks.
You can have the card, but if your cpu power isn't up to par, you won't get anywhere near theoretical.

As for mike, im sort of lost because he said it was from his main system going drive to drive.
He should still average somewhere near 100 mb/s on large files rom SSD->HDD, but he's not getting anywhere near that outside main burst.
Im gonna take a guess here and think it might be his SSD running though its buffer, and then slowing down a lot, like some low cache or no cache SSD's do.

Sorry if I "B" "b" confusing, or have them mixed up. In all my references to speed, when talking directly about ethernet, like 1 GBe, I mean bits, with drives I mean bytes. Moving a 4GB file around right now to get some speeds.

Specifics on drives and system in first post, many of these "movie" files are one big MKV, others have dozens of smaller files which kill xfer rates. File used about was a single 3.99GB AVI.
You must log in or register to reply here.
Share:
Facebook Twitter Reddit Tumblr WhatsApp Email Link