'Cowards': Eddie Gallagher tears into Navy SEALs who testified against him and discloses information that could endanger those on active duty 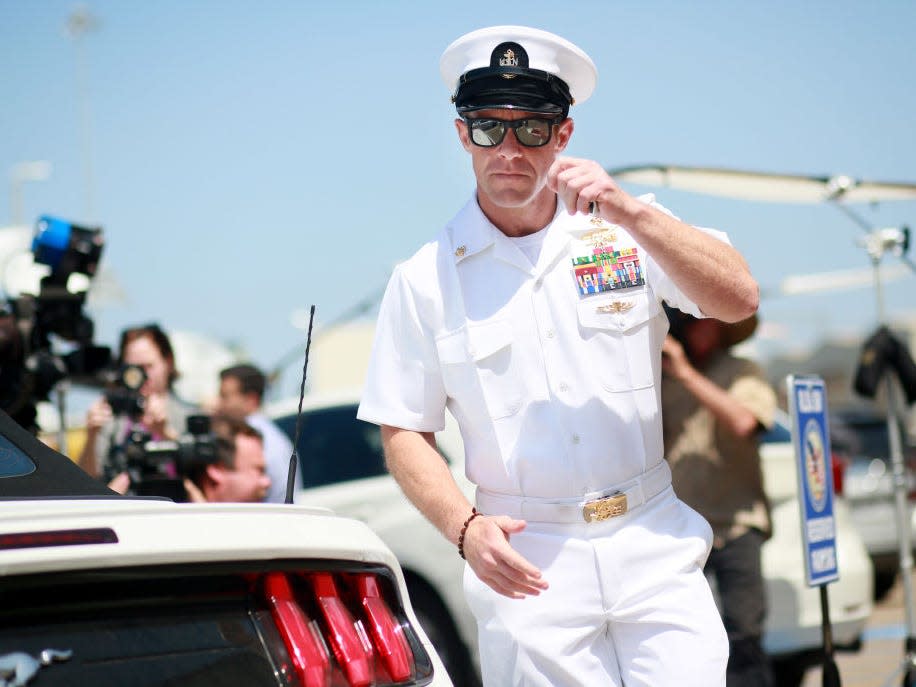 'Cowards': Eddie Gallagher tears into Navy SEALs who testified against him and discloses information that could endanger those on active duty

The 3-minute diatribe reveals the names, photos and statuses of Navy SEALs. Those details are usually safeguarded for their protection, officials say.

Retired Navy SEAL Edward Gallagher, who was acquitted of brutal war crimes, posted a video on social media on Monday, denigrating former teammates who testified against him by labeling them "cowards" and potentially endangering them by divulging sensitive information, including their names, photos, and statuses.

Gallagher was accused of stabbing a wounded and sedated teenage Islamic State fighter who was in US military custody and then ordering his platoon members — some of whom sounded the alarm against him — to gather around the body for a photograph. He was also charged with shooting civilians while deployed to Mosul, Iraq, in 2017, and warning his team against divulging his actions to investigators.

He was arrested after fellow Navy SEALs reported his alleged actions, but a jury acquitted him of all but one charge — posing with the ISIS fighter's corpse.

Gallagher's case also made headlines because he was one of three military veterans who was convicted or charged with war crimes but granted clemency by President Donald Trump in November. Trump's intervention strained the president's relationship with the Pentagon, but ensured that Gallagher's rank was reinstated and blocked a review by top Navy SEALs that could have stripped him of his gold Trident pin, which signifies that he is a Navy SEAL. He recently launched a lifestyle brand called Salty Frog Gear.

In the 3-minute video montage that Gallagher shared on Facebook and Instagram, he says in a voiceover that although the trial "exposed all the lies that were said about me by certain cowards in my platoon," people refuse to believe that he is not guilty.

Despite wanting to put this chapter behind him, Gallagher said, "Unfortunately, the fight to clear my name is not over."
He then issued a warning of sorts: "The truth has never been fully exposed about what really happened. You may think you know but you have no idea. For those who have and continue to slander my name, the truth is coming."

What's especially alarming about Gallagher's video is what comes next: videos of Navy investigators interviewing his fellow SEALs overlaid with the names, faces, and statuses of members of his former platoon.

Publicly sharing this information violates the elite group's creed, which says in part that each member will "draw on every remaining ounce of strength to protect my teammates." And Gallagher may well have jeopardized the safety of those Navy SEALs who are on active duty, according to the San Diego Union-Tribune.

Navy Capt. Tamara Lawrence, a spokeswoman for Naval Special Warfare Command in San Diego, issued a statement to the Business Insider on Tuesday, saying: "As a matter of policy we do not identify our special operators. We don't identify them by name, or by any other manner, due to the nature of their work, for the protection of their teammates and their families, and to protect on-going and future missions. Our Force knows this is our policy."

The Tribune also interviewed David Shaw, a former petty officer 1st class who served with Gallagher but did not testify against him.

"Attempting to call attention to (those SEALs') status in the way it's been done does not serve the mission or the interests of the Navy," Shaw told the newspaper. "To attempt to out (their) status raises questions about the decision to do so. Each and every one of the guys who came forward were performers of the highest caliber and people of the highest reputations within the platoon."

Gallagher allegedly threatened to kill teammates who spoke against him in the run-up to the trial, according to court documents; Gallagher's defense team called those claims "entirely fabricated."

The New York Times in November spoke with Eric Deming, a retired senior chief petty officer, who echoed the sentiment.

"No one I've spoken to is happy with how Eddie handled this," Deming said. "He could have handled it like a quiet professional. If the facts are on his side, he should trust in a board to make the right decision."
V

He's Trump's "fair-haired boy." He can get away with what the fuck ever he wants.

seems to me that this dude shouldn't be threatening a squad of disturbingly well-trained assassins.
Reactions: Meghan54, soundforbjt, tweaker2 and 2 others

The opinion of a war criminal means less than that of the nincompoop that would pardon him.
Reactions: Meghan54, tweaker2, DarthKyrie and 1 other person

Which means he’s more likely to be elected President in America 2.0.

Free advertising for his lifestyle brand?

Gallagher is a very fine person, and a stable genius

Whose logo, I shit you not, includes a Trident

Edit: For when you need to look good while practicing killing civilians, “Stay Salty”!

If only there were a way to seek justice for those who offer false testimony against you and defame your character through spreading believable falsehoods about you just to cause injury. If such mechanisms exist, then Gallagher wouldn't have to go through such drastic measures to defend his character as to endanger the safety of our service people...
Reactions: TheVrolok

I'm sure he'll be the next Secretary of the Navy or something.

Active duty teams are tight knit, not known for a lack of loyalty. That this guy had multiple SEALs calling him out as toxic and evil speaks volumes.
Reactions: Meghan54, Zorba, tweaker2 and 1 other person

expect him to become a cop soon.
Reactions: TheVrolok
V

JSt0rm said:
expect him to become a cop soon.
Click to expand...

Really? I was thinking Secretary of Defense (with some nice jackboots).

Victorian Gray said:
Really? I was thinking Secretary of Defense (with some nice jackboots).
Click to expand...

no way. He burned all the bridges there.
T

kage69 said:
Active duty teams are tight knit, not known for a lack of loyalty. That this guy had multiple SEALs calling him out as toxic and evil speaks volumes.
Click to expand...

Yeah but Mr. Trump in his infinite wisdom and compassion for the oppressed saw that the disgraced SEAL was being unfairly harassed and persecuted just as he was being harassed, disgraced and disrespected so Trump decided to "balance the scales of justice" and give the ex-SEAL his "just due" as Trump rightfully expects it for himself.

I can't imagine how worse Trump's condition is going to get but if he gets reelected expect him to go on a revenge filled expedition that pales in comparison to what he's now doing to those former members of his cabinet that saw through the charade he was pulling on the nation and tried to do something about it.

Just put a hood over his head and hand him over to the Iraqis. Seriously.
Reactions: Meghan54 and zinfamous
J

JSt0rm said:
no way. He burned all the bridges there.
Click to expand...

Trump loves him so that's pretty much all he needs to get the job.
M

interchange said:
If only there were a way to seek justice for those who offer false testimony against you and defame your character through spreading believable falsehoods about you just to cause injury. If such mechanisms exist, then Gallagher wouldn't have to go through such drastic measures to defend his character as to endanger the safety of our service people...
Click to expand...

To be, or not to be, that is the question:
Whether 'tis nobler in the mind to suffer
The slings and arrows of outrageous fortune,
Or to take arms against a sea of troubles
And by opposing end them. To die—to sleep,
No more; and by a sleep to say we end
The heart-ache and the thousand natural shocks
That flesh is heir to: 'tis a consummation
Devoutly to be wish'd. To die, to sleep;
To sleep, perchance to dream—ay, there's the rub:
For in that sleep of death what dreams may come,
When we have shuffled off this mortal coil,
Must give us pause—there's the respect
That makes calamity of so long life.
For who would bear the whips and scorns of time,
Th'oppressor's wrong, the proud man's contumely,
The pangs of dispriz'd love, the law's delay,
The insolence of office, and the spurns
That patient merit of th'unworthy takes,
When he himself might his quietus make
With a bare bodkin? Who would fardels bear,
To grunt and sweat under a weary life,
But that the dread of something after death,
The undiscovere'd country, from whose bourn
No traveller returns, puzzles the will,
And makes us rather bear those ills we have
Than fly to others that we know not of?
Thus conscience does make cowards of us all,
And thus the native hue of resolution
Is sicklied o'er with the pale cast of thought,
And enterprises of great pitch and moment
With this regard their currents turn awry
And lose the name of action.

The world has gone insane, at least within our so called civilized society.
We have a president that anoints himself king.
We have a congress that no longer gives a damn.
Those assigned as our protectors against assassin now become the assassins.
And just wait until those who really know what they are doing come along.
Gallagher nor Trump really know what the hell they are doing. They just kind of stumbled into the crimes they have committed.
Just wait for the future when others quite skilled in such atrocity come along.
Others that will elevate such acts to the highest level.
Then look out....

Look how being Trump's best buddy worked out for Flynn.

I doubt this will be the last we see of him, this type can't stay out of the headlines, intentional or not.

don't be surprised if we see something about him in the ID channel. or an episode of SNAPPED on oxygen(my SO loves those kind of shows, she just can't get enough true crime shows.
Last edited: Jan 31, 2020
You must log in or register to reply here.
Share:
Facebook Twitter Reddit Tumblr WhatsApp Email Link