Just starting to go through brainstorming process of building a new PC to replace my current 2015 4790k setup. Of course designers of more modern cases have decided that we no longer need external drive bays--that's the way it goes, I suppose, but I've gotten used to the card reader that I put into one the drive bays in my current box.

What do people do instead now? I know there are plenty of external USB readers, but it seems tidier to me to keep everything self contained. Are there cases with replaceable front port panels? I've found a few Cooler Master cases with integrated readers, but my google searching isn't finding too many other options, or other people who have found answers either. I'm surprised this isn't a more popular feature.
Of course another option is just too keep my current Fractal Design Define r4. It's a great case and there certainly isn't anything wrong with it, just looking at options. Thinking of changing things up and getting something a tad smaller this time.
0

I think I understand what you are going through with this. There is no reason why we shouldn't be able to build an 11th gen Intel system that still offers I/O and storage options that OEMs consider unnecessary or obsolete. But case manufacturers are making it more difficult. I myself am using SDXC cards in mobile devices -- particularly for my car -- and I don't have a card device in my front-panel. I could add one, but I don't deem it necessary because I can update the SDXC cards through the household LAN with a wireless connection.

My own answer derives from the experience about 15 years ago when I found a 1995 Compaq Reliant server case and modded it to my needs. It was a lot of work, and not something to which I am inclined in the future. But it was a learning experience.

After that, a friend sold me a spare Coolermaster Stacker 831 midtower case, still untouched in an unopened factory carton. I used it for two successive computer builds, including this system in my sig for which I've recently swapped out the Skylake K processor for a Kaby Lake K. That project, initially pursued in 2016-2017, left me with a system that can be easily upgraded to an 11th gen Intel system -- or any system after 11th gen as long as the ATX and mATX specs do not become obsolete. I actually bought a "pre-owned" twin Stacker 831 last year which I found on EBay. I obtained both of these cases at a price almost $100 less than the suggested retail when the case was first released -- sometime between 2005 and 2007.

Perrhaps you can find an external device with a card reader, but it makes sense that we don't want all sorts of USB cables hanging off our boxes. After that, you might try modding a recent-model case by cutting a 3.5"-long rectangle in available sheet metal -- carefully planning the work so you don't obstruct something internally or end up with something with less convenient access. Otherwise, consider an older, pre-owned computer case.
0
D

Otherwise, I just use those little USB (flash-drive style) readers, that cost about $2 a piece on ebay... well I just checked and inflation/economy/whatever, now $3 and change... or maybe still $2 ea. or less in quantity, direct from a Chinese merchant.

I used to get larger ones with lots of different flash card support but these days, since the USB3/SDXC era, practically only need SD and mSD so that's what I get (plus my old smaller cards with different interface, can use my old USB2 card readers if I ever had a cause to use them). They're tidy enough, to just store in the same plastic case where I keep my memory cards, and other little things like USB bluetooth, flash drives, etc. 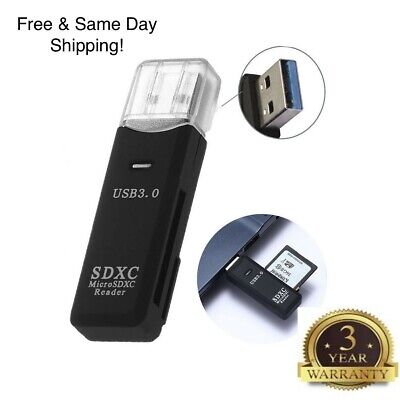